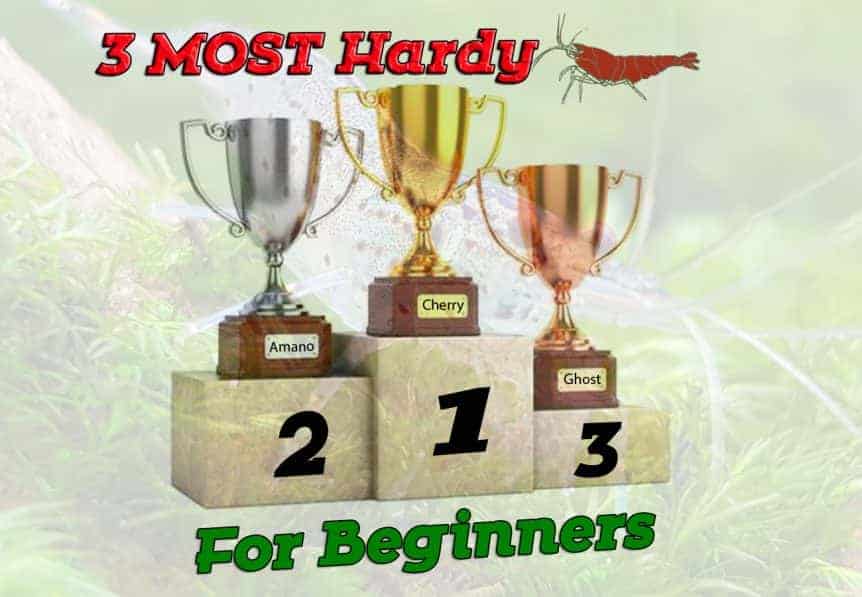 I need to start off by pointing out that, there is no difference between beginner shrimp and hardy shrimp. Personally, what I classify, as beginner shrimp is a shrimp that is suitable for beginners and that is also extremely hardy. A hardy shrimp in the aquarium is going to be more likely to take abuse or improper conditions or improper water parameters in the home aquarium. Therefore, all beginner aquarists should start with the hardy shrimp to build skills, knowledge base, and get some experience. So, what are some good (most hardy) beginner dwarf shrimp?

For beginners, I would suggest the following species: Red cherry shrimp, Amano shrimp, and Ghost shrimp.

If you are a beginner shrimp keeper, please, be patient! Obviously, you saw some beautiful shrimp in online stores. Of course, your local pet store has many kinds of amazing shrimp. The temptation is real!

However, keep in mind that you will make A LOT of mistakes. That is why you need such species, which can survive in your learning curve. Once you have raised them and kept for some time, you can go for more expensive shrimp.

You can also read my article “Top 5 Exotic and Hardy Aquarium Shrimp”.

Cherry shrimp are champions and real survivalists. This is by far the most popular shrimp in this hobby. And there are many reasons for that. Besides their wonderful coloration, Cherry shrimp are especially known for their remarkable ability to live in conditions that proved fatal to their tank mates. Cherry Shrimp have a reputation of being very hardy and bombproof.

Red cherry shrimp are excellent shrimp for people who have never kept shrimp before. They are very easy to care for. They accept a variety of food, can be kept in various kinds of water, breed easily, and are resilient and sociable.

Red cherry shrimp can tolerate a wide range of hardness, pH, and temperature. I have heard stories that some beginners put their Cherry shrimp in a tank even before the nitrogen cycle was over and they survived! Frankly saying, they got lucky at that time. I would not add anything in the tank while it is cycling. Nonetheless, once again, it simply shows that they are not too fussy about water parameters. They are a real die-hard.

Although, Neocaridina davidi species is initially native to inland waterbodies in East Asia. Nowadays Red cherry shrimp have been found even in thermally polluted waters in Europe (Germany and Poland). Once established, the red cherry shrimp is a highly productive species. They are omnivorous and well adapted to different freshwater parameters. For example, biologists found some individuals in 11.8 °C (53 F) water!

Biologists noticed that I quote “Starvation did not hinder the hatched juveniles’ capacity to molt, nor the time necessary to reach the first molt… The high resistance to starvation showed by Neocaridina davidi gives the species a high potential to its aquaculture for the ornamental not only shrimp trade but also is a characteristic of a viable invader in the Neotropical region”.

Red cherry shrimp will be a great choice for peaceful community tanks. Planted, with dark places for them to hide, especially for the female when carrying eggs. Java moss is particularly good as a cover for baby shrimp. Darker gravel will bring out deeper reds in them.

You can read more about Red cherry shrimp in my detailed guide about them. 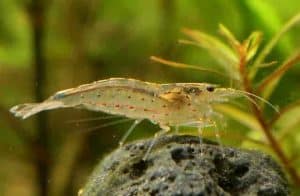 The second place in this rating goes to Amano shrimp. The Amano shrimp was named after Takashi Amano, a world-renowned aquascaper who helped innovate the fish-keeping hobby immensely.

They are also one of the most adaptable shrimp in the hobby. Amano Shrimp can adjust to almost any kind of freshwater, with a moderately basic or acid pH, and a very wide range of GH and KH values. Well, pretty much we can say that they can live in nearly every water condition. They can even tolerate different levels of salinity. Hardy things indeed!

Regarding the temperature, it is possible to keep them in any water temperature between 18 and 28°C. The same as Cherry shrimp, Amano shrimp do well in unheated tanks. The only limitation I can see is for the tanks with very soft water. It can cause molting problems.

Amano shrimp are peaceful and can live side by side with other dwarf shrimp species. Utility-wise, they are ravenous algae eaters. Nobody can compare with them. Not even close!

Another good thing about Amano shrimp is that they live much longer than other shrimp (except Bamboo fan shrimp and Cameroon fan shrimp). They are very easily accessible at any local fish store. The only downside of Amano shrimp is that it is really hard to breed them. They only breed in certain specific conditions of brackish water.

Overall, this is an excellent species, and perfect for any beginner. They are true survivors!

The bronze medal in this competition of survivors goes to Ghost shrimp (Palaemonetes paludosus). To tell the truth, there are some controversial opinions about this one because Ghost shrimp have a high death rate in the beginning. I bet that some of you start questioning, in this case, how can they be in this list?

Ghost shrimp are dirty cheap and often sold as live food for larger fish. And because of this, their care is rather poor ugly from the very beginning under the assumption they are not going to live long anyway. However, they still keep living even in these terrible conditions.

It shows us that once they get accustomed to their new surroundings, they become amazingly hardy and can survive under conditions significantly better, compared to most other types of shrimp.

The same as Amano shrimp, Ghost shrimp are predominantly a freshwater species. However, in the wild, biologists also found them in brackish and salt waters. Some biologists observed survival at a salinity of 30 ppm in the laboratory. Water temperatures (in their natural habitats) can range from 13 – 33 C (55 – 90F). Palaemonetes paludosus fed heavily on algae, this is a great bonus for any tank. They have a semi-translucent body and can grow up to 6 cm (2 inches).

In general, Ghost shrimp are a great option if you are just getting started. They are pretty hardy shrimp. Therefore, if you are a beginner shrimp keeper, Ghost shrimp is a good choice to sharpen your skills.

Important: There are multiple species that are referred to as Ghost shrimp and can be easily confused. Especially, when they are small. The problem is that some of them (for example, Machrobrachium Lanchesteri (Whisker shrimp)) are predatory. Therefore, you should never put them with other dwarf shrimp, snails, and even small fish.

You can read more about how to distinguish them in my article “Ghost shrimp – Detailed Guide: Care, Diet, and Breeding” right here.

Some of you might wonder about the 4th, 5th, etc, places. This is just a matter of preferences. Let me put it this way.

There are many varieties of Neocaridina (Cherry, Sakura, Fire Red, Neon Yellow, Blue Velvet, Sapphire, Blue Diamond, Black Diamond, Black Rose, Orange Sakura, Green Jade, Rili Shrimp, Snowball shrimp, etc.). What is more important for us, they are comparably durable as well! They can be a great alternative to Cherry shrimp. Why? Because they all belong to Neocaridina genus and can interbreed.

However, Red cherry shrimp is the cheapest out of all.

In addition, I have seen that some aquarists recommend Bamboo shrimp as beginner-friendly shrimp. Frankly saying, I am very surprised to see that. I love Bamboo shrimp, they are super cool creatures. Nonetheless, they are completely unsuitable for Nano-tanks. Bamboo shrimp need a rather larger tank due to their unique feeding behavior. They also require high oxygen water. This is a big no-go, if you are a beginner.

1. Do not test their limits

Red cherry shrimp, Amano shrimp, and Ghost shrimp are pretty hardy shrimp and good for a beginner. They can tolerate a wide range of conditions and can forgive you some mistakes. However, it does not mean that they like it. Extreme conditions will lower their life span and decrease their ability to breed.

It is very important to do some research on the species of shrimp you would like to keep prior to bringing them into your home.

What kind of environment do they need to thrive in? What are the ideal water parameters for them (PH, GH, KH, TDS)?

Learn more about the nitrogen cycle.

When you are introducing shrimp to their new home, you should definitely go for drip acclimation. Stress from shipping is one of the main factors that kill shrimp. Do yourself a favor, do not skip this step and the survival rate will be even higher.

Shrimp are scavengers. They are easy to feed. However, overfeeding is another major cause of shrimp loss. This is the most popular rookie mistake.

By giving your shrimp a lot of food, you are killing them! Eventually, leftovers will lead to the buildup of toxic compounds. Even worse, it can also cause an outbreak of infection. Scutariella Japonica, Planaria, Vorticella, Hydra, and Ellobiopsidae or Green fungus can become a very serious problem for you and your shrimp.

Beginner shrimp keepers need to keep beginner shrimp. This is a fact. Of course, there are a lot of shrimp species out there to keep, but there are certain species that are more fitted for beginners.

With all due respect, but if you are new to this hobby, and decide to go for, let’s say Crystal red shrimp, Cardinal shrimp, Bamboo shrimp, etc., you are more likely to fail than succeed. They are beautiful and absolutely stunning shrimp but they are not great for a beginner. Because they require a higher care level than Beginner.

4 thoughts on “3 Most Hardy Dwarf Shrimp For Beginners”