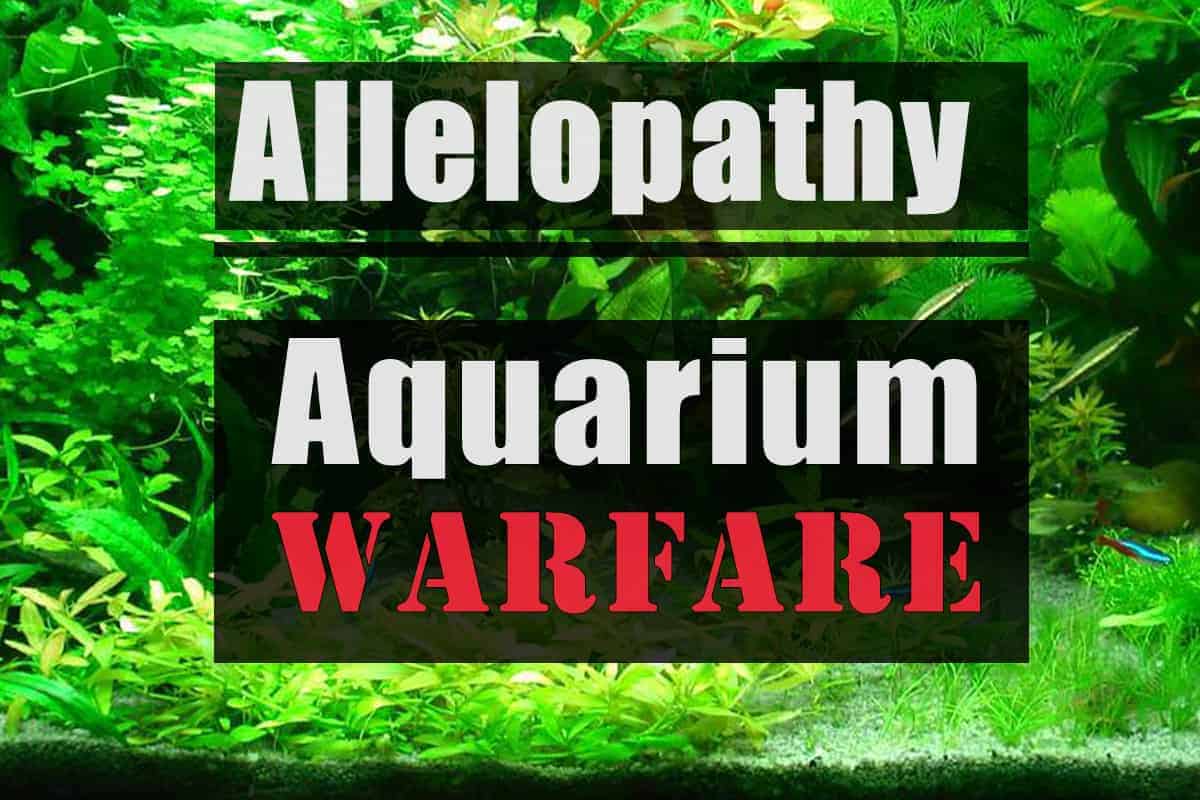 Today I would like to touch one of the most complex topics in aquarium hobby – Allelopathy in aquarium plants.

Allelopathy is a natural phenomenon, which is often defined as: The inhibition of growth in one species of aquatic plants or algae by chemicals produced by another species.

I believe that many aquarists have experienced the effect of this warfare between plants in their tanks without even realizing it. I am talking about situations when some hobbyists simply cannot grow this or that aquarium plants although their tanks have almost ideal requirements and water parameters for them.

Why some species of aquarium plants keep dying in some of our planted tanks but thrive in others?

Allelopathy might be the answer. Although in recent years, research on the allelopathy of algae and water plants has gradually increased, we still do not have full information to be absolutely certain how it works.

The word allelopathy is derived from two separate Greek words, Allelon which means “Of each other”, and pathos which means “to suffer”.

Although the theory of allelopathy was described at the beginning of the 20th century by the Austrian professor Hans Molisch, scientists could not find enough empirical evidence of these interactions until 1966.

By that time the International Allelopathy Society (IAS) defined this phenomenon as any process involving secondary metabolites produced by plants, algae, bacteria, and fungi that influences the growth and development of biological systems.

Basically, allelopathy occurs when any organism produces chemicals that affect another organism. It means that not only your plants in the tank has this ability, the algae in the tank can also use it against the plants and even against another algae species as well!

This means that allelopathic chemicals target and inhibit organisms indiscriminately. It prevents the organisms from growing or spreading at a normal rate. This inhibition may also ultimately kill the target organism.

Allelopathy is  natural warfare of the plants and algae in the aquarium. This is the ultimate adaptive strategy in their competition for light and nutrients.

Note: Every plant species is different. Therefore, in spite of the fact that allelopathy commonly inhibits other organisms, this effect can be also positive for some species.

Other Reasons for Allelopathy in Aquatic Plants

Now we know that in general allelopathic chemicals help plants establish dominance in a tank. This is because of how the chemicals inhibit the growth of other plants. A single allelochemical may not be a strong inhibitor by itself.

However, allelopathy is not limited to just fight other plants or algae in the tanks. Some aquarium plants use these chemicals function as a defense mechanism to protect against insects, snails, fish from being eaten.

Ideally, it is always good to research what plants and aquatic animals are not compatible with each other when you are making a planted tank.

Interesting fact: Allelopathic chemicals are not used in the growth and development process of plants. The sole role of the chemicals is to work as an active defense mechanism in plants, and algae.

You can read more about it in the articles:

Why Are Allelochemicals More Common in Aquarium Plants?

Producing allelochemicals does require plants to use some energy. It takes around 10% or slightly less metabolic investment in order to produce allelochemicals.

This may sound like a lot for a defense mechanism. However, allelochemicals are an effective way to prevent plant losses caused by herbivore grazers. The chemicals can also protect aquarium plants from disease.

How Does Allelopathy Inhibit Aquarium Plants?

Allelochemicals are released directly from plants through different mechanisms, such as root secretion, leaching, volatilization, and also passively through plant decomposition.

The chemicals can make it so that the parts that help the plant undergo photosynthesis don’t develop correctly. Allelopathic chemicals can also encourage faster decomposition of photosynthetic pigments, affect the respiration process, and affect enzymes.

What Aquatic Plants Use Allelopathy?

20 years ago Diana Walstad wrote a book and created her own way (the Walstad Method) of growing plants in the planted tank.

In her book, she mentions that there are at least 97 aquatic plants that have been reported to use allelopathy.

Due to the fact that the use of allelopathy is a more recent discovery. It is very possible that all/most aquatic plants secrete some sort of chemicals that affect other organisms. However, this has not been proven by researchers as of right now.

Some common aquarium plants like Duckweed, Vallisneria, Hornwort, Sagittaria, Bacopa, Pistia stratiotes, Cabomba, Ludwigia hexapetala, etc. have all been tested and proven to produce allelochemicals. It may be very useful to know if we start having problems with other plants in our tanks without any obvious reason.

For example, according to the study, Pistia stratiotes was responsible for the reduction in the germination of 80 % observed on crop growth. Scientists found several allelopathic compounds (such as α-asarone, hydroxyl fatty acids, and steroid derivatives) which inhibited the growth of 17 algal cultures. At the same time, rice was the most tolerant to allelopathic effects.

In another experiment, Sagittaria sagittafolia inhibited the germination of wheat and wild oat but enhanced milk thistle.

Once again it shows us that all plants react differently to these effects. In some cases, they will not even notice it or they may even use it beneficially for their own growth.

How Have Aquatic Plants Evolved to Use Allelopathy?

To understand allelopathy in aquatic plants, we have to look at the structures of the plants that live on land. Land plants use phenolics in order to synthesize lignins.

Lignins help land plants to stand upright. They are essential for land plants but aquatic plants use water buoyancy in order to provide structural support. Lignins are still created but in much smaller amounts. So, what happens to the excess phenolics that are normally used to produce lignins for structural support?

The answer is that the phenolics are used during the process of allelopathy.

The plants just had to make slight adjustments in the ways that they used phenolics. Over time, phenolics evolved through genetic mutations. This has caused them to be more effective at inhibiting other organisms.

The phenolics now have stronger inhibiting properties than in the past. Slightly altering common phenolic acids can result in inhibition in algae.

How Do Different Amounts of Phenolic Acids Affect Organisms?

How Does Allelopathy Repel Insects or Fish?

Phenolics, which are produced for the allelopathy process, deactivate proteins. Phenolics can damage the proteins in an animal or an insect’s stomach. This is a natural deterrence to anyone who may want to snack on the plant.

What Are Some Potential Usages of Allelopathy in Aquarium Hobby?

By keeping your plants healthy, you can control algae growth in an aquarium. Algae blooms can have a high impact on aquatic environments. This is because some species of algae or cyanobacteria (for example, “blue-green algae”) actually produce toxins.

A high concentration of these toxins may affect fish currently residing in your tank. You can also decrease the amount of algae in a tank by decreasing the amount of light that your tank gets on a daily basis.

You can also read the articles:
How to Remove Algae with Plants
Types of Algae. Best Algae Eating Team

What is Auto-Inhibition in Aquarium Plants?

Auto-inhibition occurs when a plant makes allelochemicals that inhibit its own species.

Auto-inhibition sounds extremely self-destructive. Why would a species want to slow the growth and prevent new growths of its own species?

The answer is that auto-inhibition is actually helpful in some situations. Some tank environments may not be suitable for a large amount of plants. This causes new plants to compete for resources with existing plants.

By limiting the growth of their own species, these auto-inhibiting plants make it so that the adult plants of their species can thrive more. At the same time, the younger plants are not likely to survive.

This means that new plants aren’t growing in to replace the older plants. Some species of algae naturally display auto-inhibiting traits.

We used to think that the aquarium hobby is a source of relaxation and serenity. Recent studies show, however, that this may not be true for the plants inside.

Allelopathy or never-ending warfare between plants in our tanks is a real thing!

In nature, it is not possible to find so many plant species in such limited space as our tanks. That is why in our aquariums, all plants face severe competition for resources, either space, light, or nutrients.

As a result, we often do not even realize what actually is happening in our planted tanks.

How to Spot Nutrient Deficiencies in Aquatic Plants 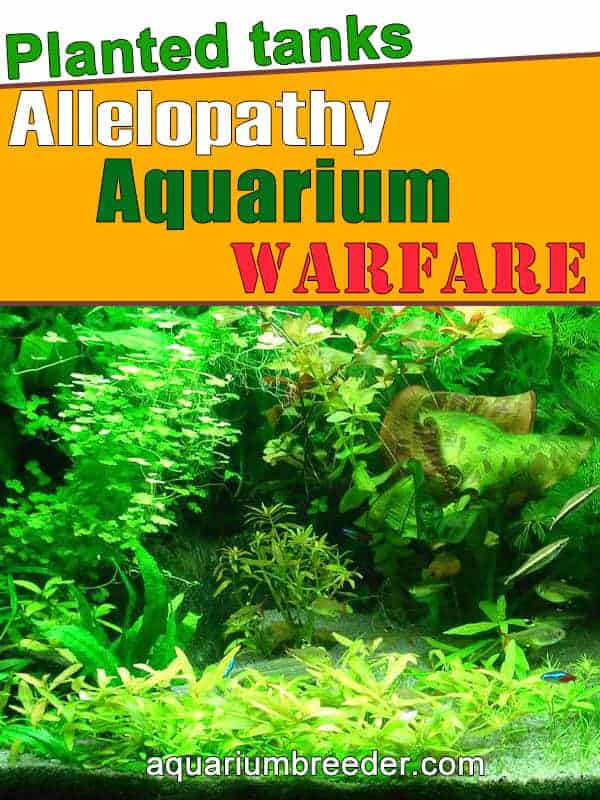