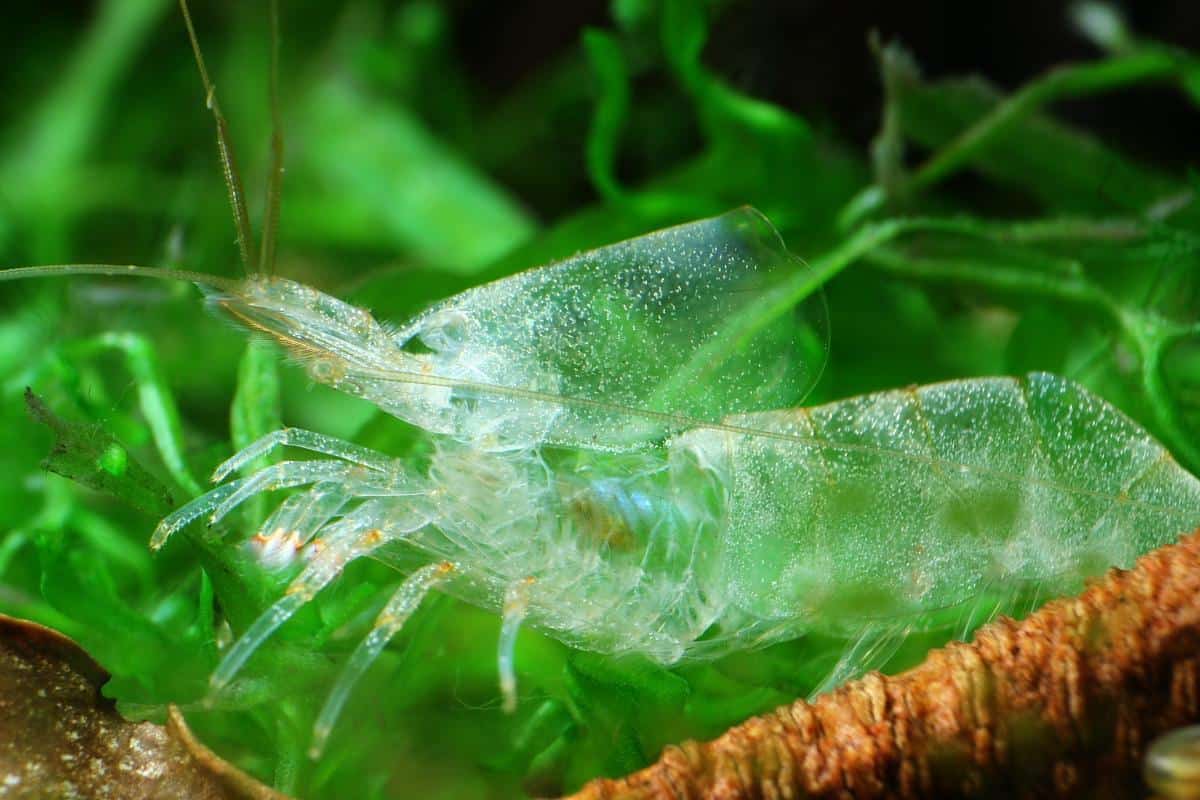 Molting is one of the most important physiological processes for shrimp growth. It is a very complex procedure in which complicated metabolic processes take place. Since increasing body size occurs in a series of steps associated with the casting of old exoskeleton.

In this article, you will know why, how, when dwarf shrimp molt. The same as any other crustaceans, shrimp have external shell (which is often called an exoskeleton or cuticle) that limit the size of shrimp growth. Due to the fact, that the development rate is not linear as with fish but it is stepwise, the only way to grow for the shrimp is to replace its exoskeleton.

Thus, in order to breed shrimp successfully in your aquarium, it is better to know and understand this process. 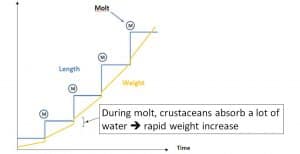 In dwarf shrimp, as in other crustaceans, the rate of growth is a function of both the frequency with which they molt and the size increase per molt.
Unfortunately, there is not much information in the literature regarding, this important biological aspect of shrimp life. I have tried my best to gather everything here to share it with you.

According to the researches the shrimp shell consists of the three main components and additional elements such as:

All these components are arranged in a layered structure that looks like a spiral staircase. A combination of calcified chitin and protein makes the exoskeleton firm.

There are Four Stages in Dwarf Shrimp Life

Interesting fact: the shrimp starts eating significantly less and less the closer is the moment of molting.  During this period of time, approximately 20 to 25% of the total body-calcium will be absorbed from the old shell, along with other important minerals. 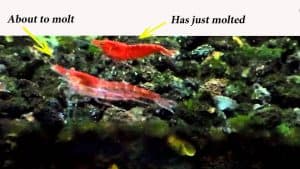 At this stage, the new shell becomes visible to the naked eye. Also, aquarists noticed that some type of dwarf shrimp starts looking really strange, they get muddy color.

In addition, shrimp start scratching or “itching” their back a lot. They do that to reduce the strength of the exoskeleton in the breaking point. 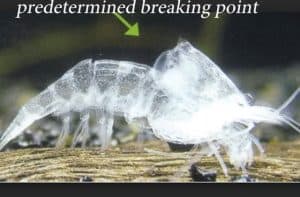 When it is time to molt, the shrimp start slowly pumping up its body with water until the old exoskeleton bursts at the breaking point.

This predetermined breaking point is located in the neck area, more precisely in the skin fold between the head and the armor of the abdomen.

Then the shrimp jump out of their old shell in fractions of a second at the breaking point.

Note: In some rare cases the berried females molt. Unless you save the eggs, they will not survive. You can read an article “Save the Eggs from a Dead Shrimp. Artificial Hatching” right here.

It is the shortest stage. It usually lasts from 12 to 36 hours for an adult shrimp. This is the time when the shrimp recuperates from the previous molting. There are two goals at this stage:

Shrimp start curling their tails right under themselves so that their whole body forms a tight “U” shape. By doing so they stretch and loosen their old shell.

The process of shedding off the shell has a huge stress effect on the shrimp’s body. As a result, its body, which is formed by the exoskeleton, cannot function at its full capacity yet. Therefore, the shrimp have to activate all its inner body reserves so it can harden and mineralize its weak exoskeleton.

During this stage, the shrimp become extremely vulnerable not just to physical effects but to some diseases and parasites as well. If you look at shrimp right after molting, you will see that they can barely move their pleopods.

They have a sort of dull appearance right after a molt. They are too weak and soft. Which makes them easy prey for predators.

In addition, the absorption of huge volumes of water leads to osmotic shock. Which in its turn negatively affects the shrimp’s internal organs by rupturing or bursting the cells due to big and abrupt changes. 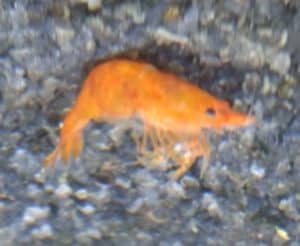 Note: If you see that your shrimp lies on the side in the “U” shape for hours, it means that something went wrong during the shedding. Unfortunately, in most cases, it will be too late to help. They will become too stressed and simply die.

Some of my friends tried manually to free the shrimp from its shell. I have never heard that any of their tries were successful. In the best-case scenario, they broke all shrimp’s legs. This is not worth doing. As a matter of fact, but shrimp will have better chances of surviving if you do not try to save them.

In order to help, it would be better to create all the conditions for a favorable outcome of molting. It is advisable to use osmoregulators to help shrimp to survive.

You can read more about “Dwarf shrimp and Molting problems. The White Ring of Death” right here.

This is the stage where the shrimp’s exoskeleton and body function without any limitation. The shrimp eat as much as it is possible, and actively gains weight.

The exoskeleton weighs about 5% of the shrimp body weight.

There was an observed weight change during the pre-molt and post-molt states. A sharp increase in weight began about 2 to 3 days before molting and about 2 to 4 days following molting. It was suggested that this was due to water absorption, firstly for the removal of the old exoskeleton and also to expand the soft new cuticle.

Tip: Sometimes the female can molt while wearing her eggs. Most likely, this is a consequence of deviations in the habitat. Check your water parameters ASAP. You can manually try to save the eggs and incubate them.

You can read more about “Save the Eggs from a Dead Shrimp” right here.

Factors Affect Molt Frequency in your Aquarium. What can Promote Molting?

According to studies, there are several factors, which play an important role in molting:

Usually molting is affected by the hardness and TDS of the water. If your water has a high parameter of hardness, the shell of the shrimp can be overly built up. Therefore preventing the shrimp to break and shed it.

Tip: In addition, Some researchers believe that in warm water (25-26 °C) shedding is easier for the shrimp. Maybe because in this case it increases their metabolism and gives them more energy and strength.

All these factors affect molt frequency to a varying degree. The dwarf shrimp molting process is highly susceptible to environmental factors, particularly temperature and food availability, which affect growth by altering molt frequency and molt increment. While the relationships between temperature, food, and growth are consistent, the response to CO2-induced pH reduction is variable.

Note: water changes for newly molted shrimp can be very dangerous if replaced water contains a higher concentration of salt compared to that the shrimp has right now.

In this case, shrimp’s sell will absorb the salt (because of Osmosis). In its turn, in order to adjust the saline concentration, the cells will have to intake more water to compensate.

As a result, there will be Cell Hypertrophy. It causes cell death and eventually shrimps death.

What Dwarf Shrimp Need to Molt

The required salts for an upcoming molting are absorbed mainly from the water and apart from the diet, transferred to the bloodstream, and mobilized for use. Therefore, eating the old exoskeleton after they molt, as often assumed, is not absolutely necessary.

The calcium intake itself depends on the concentration in the body.

Tip: use Indian Almond Leaves (Catappa leaves), Mulberry leaves, etc. their components help the molting process, (reduces mortality rate during this stage). You can also solve the problem of lacking some minerals (like calcium) by adding mineral rocks to your aquarium.

Personally, I think that Almond leaves and mineral rocks should be enough for any shrimp breeder. But if you are interested in over products, take a look at JBL Nano-Crusta. It gives the shrimp the clay mineral montmorillonite, which shrimp need for molting or GENCHEM BETA-G 50G.

Is It a Dead Shrimp or Molting?

Having seen the discarded exoskeleton for the first time, the novice aquarist can take it as a dead one. Some people think that molt is always transparent and (or) clear white.

This is not so. Especially, if the old exoskeleton belonged to a more intensely colored female. It is very interesting but the exoskeletons of the females often retain traces of pigmentation. Thus it is very easy to confuse it with the really dead shrimp.

To be sure you need to take a closer look at the shell. If there is no pigmentation, most likely in it is an empty shell. Also, the molt will have a very identifiable split in the middle (breaking point) of the shell.

What Should I Do With Shrimp Exoskeletons

Nothing. Do not remove them from your aquarium. These shells contain a lot of minerals and shrimp will eat them gladly. Do not worry. Your tank will not become a mess.  The only reason to remove the exoskeletons if your shrimp are sick or there is a parasite in the tank, for example, Scutariella Japonica.

During the life cycle of shrimp, the succession of molts is more frequent in the early stages of life, decreasing or ceasing in adults.

Smaller shrimp molt more frequently than larger shrimp, the body size and sexual state also affect the length of the inter-molt cycle. Adult shrimp shed every four to six weeks depending on feeding and water changes. The older they get, the slower dwarf shrimp grow, and the less often they molt. Adult specimens molt only to regenerate lost limbs.

2 thoughts on “Aquarium: Molting Process and Metabolism of the Dwarf Shrimp”