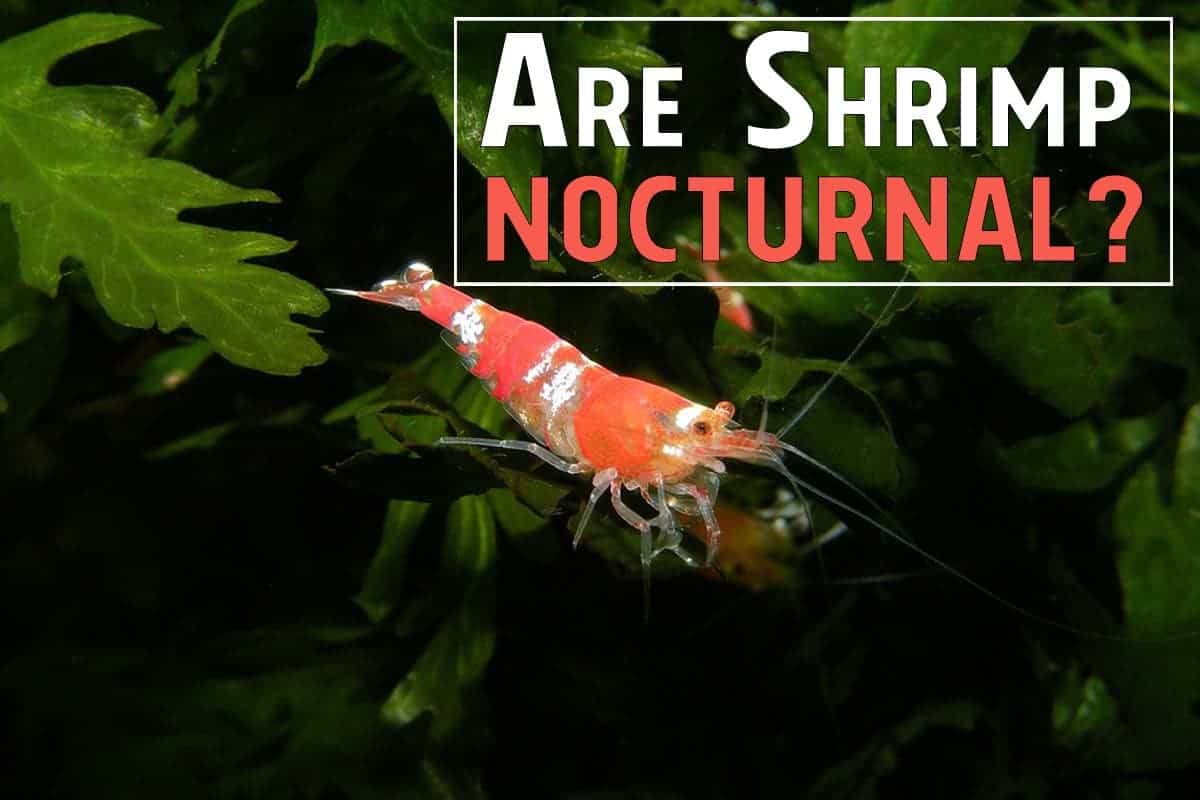 Recently I have come across a few blog posts which are supposedly answering this simple question – “Are shrimp nocturnal?” Unfortunately, the information in some of those articles was either fluff or completely wrong. Therefore, I feel obliged to add my voice and correct some of these falsehoods.

Like most crustaceans, shrimp tend to be nocturnal scavengers. So, yes, shrimp are nocturnal animals and there are many proofs for that.

In this article, I will be talking about why shrimp are nocturnal animals and why this simple question got the wrong answers.

Let’s start from the basics and move on step by step.

What Are Nocturnal Animals?

Based on this description some people start claiming that shrimp are just more active at the night and do not sleep during the day as nocturnal animals do. Therefore, they are neither diurnal nor nocturnal.

However, there is much more to it.

Shrimp’s activity in our aquariums, their natural behavior, and physiological requirements are not the same!

A simple fact that you can see your shrimp during the daytime, in general perspective, does not mean anything. Because even their sleeping mode is completely different to what we’d expect.

Generally, in the behavioral sense, sleep is characterized by minimal activity, low or non-responsiveness to external stimulation, and decreased heart rate.

Even though shrimp do not lay down when they are sleeping, they do not fall outside these criteria.

It can be hard to notice but shrimp:

Note: As for the heart rate, shrimp have an open circulatory system. It means that all their blood (Hemolymph) is not only contained within veins and arteries.

Therefore, we cannot apply standards for vertebrates to invertebrates. In all vertebrate organisms, this is a closed-loop system, in which the blood is not free in a cavity.

When Do Shrimp Sleep?

The short answer is that shrimp do not have a regular sleeping schedule. Even during the daytime they only have brief periods of rest sporadically.

It would be very strange to assume that animals (like shrimp) which are at the bottom of the food chain, have the luxury to sleep even a few hours straight.

Clearly, they will show some activity during daytime … under certain conditions.

Shrimp and Activity During Daytime

Some of you may say – “But my shrimp are active during the daytime, I can see them swarming other food all the time”.

Well, it is true but again, it does not mean anything. Why?

Because in aquariums, freshwater dwarf shrimp, which were born to dwell in the lakes, ponds, and rivers, are deprived of almost everything that they would experience in their natural habitats, basically, they are denied the ability to act as they used to.

For example, let’s take people on vacations. Lots of us can read, play, walk, and talk until morning or sleep during the daytime. Does it mean that we (humans) are nocturnal? No, it does not. Because this behavior is an exception to the rule.

Basically, in our aquariums, shrimp are on vacation all the time.

Of course, under these circumstances, their behavior pattern will be different.

However, if you put predatory fish in the tank and stop feeding them, you will rarely see your shrimp in the open again – they will return to their natural nocturnal lifestyle.

It means that the argument of shrimp’s diurnal activity does not have any value.

Shrimp and Light vs Dark Experiment

In one of my articles (How Light Affects Dwarf Shrimp) I mentioned a simple experiment that anybody can do.

When they are not feeding, shrimp tend to prefer darker places to hide. If they are feeling safe, they won’t mind foraging during the daytime.

However, if they are feeding and there are predators around, they will stay hidden anyway until nighttime.

What about the primal instincts, activities, and physical processes in shrimp?

In nature, molting, breeding, and mating behavior usually occur in the dark.

Shrimp rarely molt, mate and breed during the daytime because these are their survival strategies. This is another proof that they are nocturnal animals.

Many nocturnal animals have good night vision. What about shrimp?

There is a popular belief that shrimp primarily use scent, not vision, to search for food. Well, this is not true.

Dwarf shrimp have compound eyes, which give them panoramic vision. Even though compound eyes do not focus well, they are very sensitive. It helps them to detect UV light in low light conditions and notice the slightest movements around them.

Note: Their large eyes may also be highly reflective when a bright light flashes them.

According to the study, to determine the role of vision in feeding, the eyes of the juveniles shrimp were painted over (deprived of vision) with a white manicure. Their feeding response to commercial pellets was compared with those with untreated eyes.

Shrimp with untreated eyes detected a feed pellet right away. However, blinded shrimp did it only after random accidental touch with the walking legs while roaming on the aquarium bottom.

Shrimp are natural scavengers. They are very adaptive to find food on the river and pond beds where light is scarce.

According to another experiment, higher survival was recorded at complete darkness (no light period) compared to 13:11 hours (long light period).

It means that shrimp feel safe and more comfortable at night time.

Stress affects their immune system and makes them susceptible to parasites and other diseases including bacterial infections, fungal infections, or all types of different illnesses.

You can also read my articles:

Therefore, the mere fact that they can be seen during the daytime does not prove anything. Scientific studies and even simple experiments show us that shrimp are nocturnal animals and have nocturnal habits. So, it would be wrong to claim otherwise.