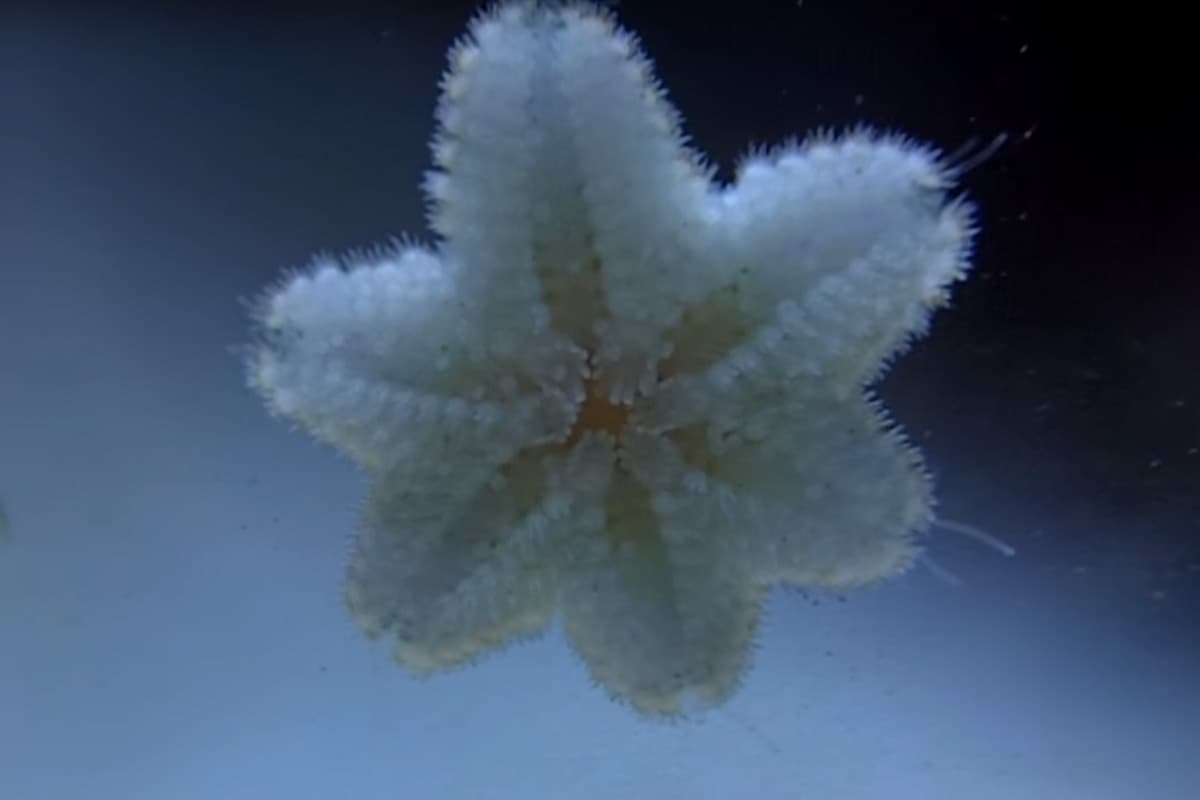 What is Asterina starfish? Is it out friend or foe? First of all, once you start searching for the answer, you will not find a lot of information about it. Secondly, it will be very confusing and contradictory.

But, here, what is most important is that; each of these aquarists’ opinions is based solely on personal experience. The point is that there are almost no articles regarding Asterina starfish in our aquariums.

The family Asterinidae is a cosmopolitan taxon. Many of these sea stars are known as “Bat stars” due to their webbed arms. The genus Asterina is represented by 15 species in world seas while three and two of which is known from the Mediterranean and the Turkish seas.

In general, the body shape Asterins Starfish reminds a regular pentagon, the arms short with rounded tips. The abactinal surface bears a large number of short spines in groups of 2 – 6, arranged in rows running to the arm tips. The spines are usually pairs, but sometimes in a single. Each of the paired mouth angle plates bears three or four marginal spines. Spines are usually absent from the ventral surface of the mouth.

Although these animals inhabit shallow waters (3 to 5 m depth, however, some species can be found up to 150+ m depths from the shore) worldwide, their ecology and life histories remain poorly known. In nature, Asterina starfish occurred at a high density. They prefer rocky, stony, and sandy bottoms as the substrate.

How do we Get Asterina starfish in our Tanks?

Asterina starfish are professional hitchhikes, so, it is very easy to accidentally introduce them into the tank. Due to the fact that collecting live rock from the reef ecosystem is still popular, it makes very easy for Asterina starfish to get into pet stores first and then into home aquariums.

Asterina Starfish as an Aquarium Invader

Asterina starfish are very hardy and extremely good at surviving. Some species can tolerate even low temperatures (down to 8C or 46F). They also adapt well to artificial conditions, and, what is even the most important for any aquarists, their feeding is often nonspecialized! 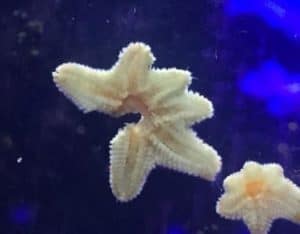 They propagate asexually by splitting in two across the center or by dropping off legs (Autotomy) and those legs become new sea stars. So, if you see them in your tank with missing appendages, it is most likely that they have dropped an appendage or have been themselves the dropped appendage and are growing into a new one.

Are Asterins Starfish Good or Bad

Actually, to answer this question we need to know:

So, can anybody answer these questions? I have my serious doubt about that.

First of all, it is extremely hard to identify the species of Asterina starfish? Second, how can we know their feeding preferences if we do not know what species we have?

Nonetheless, even if we cannot answer these questions, there is one thing I would like you to pay attention to. Nature has many examples of species adaptability to environmental conditions (for example, carnivorous parrots). It is always associated with animal nutritional deficiencies. Always.

Nutritional Deficiencies as a Problem

In aquariums, nutritional deficiencies are often associated with the fraction of the bottom substrate. Medium to large oolite and coral stones usually provides sufficient feed in the form of microorganisms. However, mineral (quartz, basalt, and other types of “sands”) and other non-natural substrates of oceanic origin do not provide enough food.

Therefore, ‘synthetic’ aquariums that exclusively based on the use of chemical water purification and do not have at least a sufficient amount of natural substrate have a very high chance of getting ‘bad’ Asterina starfish. We think that our beautiful aquariums replicate natural biotopes. We are often wrong. This can be also the reason why some hobbyists have had them for years without issue.

However, I still need to mention that there are some Asterina species that are non-selective omnivorous feeders. For them, it really does not matter how good your reef tank is in terms of natural balance, and they will eat absolutely anything, including coralline algae, corals, polyps, etc.

The Most Frequent Asterias Starfish Species in Our Tanks

The information on the diet and feeding ecology of these species is fragmented and very scarce, and thus their ecological role and importance are almost completely unknown. I am not a marine biologist but this is what I found. 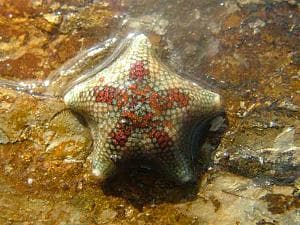 This species will eat everything in your tank. Their diet may include tiny worms, detritus, diatoms, cyanobacteria, algae, coralline algae. There are reports that people saw them eating the Corky Sea Finger (Briareum asbestinum), the Palm Tree Polyps (Clavularia sp.), etc.

Asterias gibbosa starfish are easily stressed and often shed or discard their legs, which will regenerate into another starfish.

Asterina sarasini are masters of disguise and often do not go out during day time. This species will eat mostly detritus, cyanobacteria, and carrion. In nature, they are found out in large aggregations. Therefore, the pack of these starfish can completely gobble up injured or dead corals in a few hours. 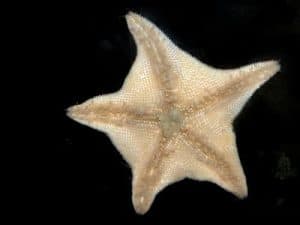 The few studies on the diet and feeding habits of bat stars illustrate their broad diet. However, no studies have integrated the consumption of their very different prey types simultaneously and hence these animals have been often treated more like specialist species rather than omnivorous generalists.

In aquaria, they act as non-selective omnivorous feeders. In such circumstances, it seems that this species tends to consume any available food in proportions similar to its occurrence in the field. Even more, according to some studies, in the case of the high density of adults cannibalism was also observed in this species.

This Asterina species is the most frequent guest in our reef tanks. They are native to Vietnam, China, and Indonesia regions. It is very hard to see them in the tank while they are small. Their diet includes detritus, diatoms, cyanobacteria, and algae.

They are very prolific and without proper control can quickly overrun any tank.

Asterias Starfish. Should They Stay or Go?

In my personal opinion, Asterina starfish have to go. They are pests in your saltwater aquariums.

Yes, it is true that some species can be a harmless and beneficial addition to clean up crew. However, you can never be absolutely sure that it will be like this all the time. I know examples when people had them for several years and they did not bother anything in the tank. But one-day Asterina starfish just started eating corals.

As I have just said, the most probable reason – with time there has become too many of them to find enough food. So, because of nutritional deficiencies, they turned against corals. This is an instinct of survival and you cannot fight it.

Therefore, if anyone finds Asterina starfish in the tank, DO NOT hesitate and take them out ASAP.

How to Remove Asterina starfish

First of all, you need to start with controlling and cutting back on feeding if you want to reduce their population. The number of Asterina starfish grows to the bio-load in the tanks. Of course, it will not remove them but, eventually, the numbers will shrink to reflect how much food you actually have to support them. Otherwise, they will reproduce faster than the rate of removal.

Keep in mind that if you have massive die-off, they will produce ammonia as they rot. Test your water parameters and remove dead Asterina starfish from the tank.

There are people how can do that with tweezers. Personally, I find it difficult to do. There is always a chance that Asterina starfish will drop some of the legs that will become another starfish after a while. Nonetheless, if it is easy for you, then go for it.

Turkey baster is another, easier way to remove Asterina starfish. It will simply suck them up without damaging it. In addition, it is easy to manipulate.

In any case, manual removal works great but takes dedication. Depending on the infestation level, you might have to do it every day for weeks. Actually, the more often you do that the better. Ideally, if you see them – suck them out.

Tip: At night and early in the morning you will find way more Asterina starfish.

Some aquarists use high-tech technology such as Lasers to remove Asterina starfish, Aiptasia, and some other pests. Although it can be one of the fastest ways, it is also pretty expensive. In addition, be very careful because the glass can refract the beam. Use special glasses to protect your eyes. It is not a toy. 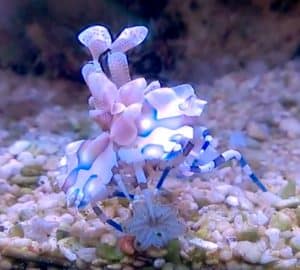 Introduction starfish hunters can be a good way to deal with these pests as well. Harlequin shrimp do not eat anything but starfish. This feature made them extremely popular in the reef-keeping hobby. However, if you run out of starfish they are going to starve to death.

Keep in mind that Harlequin shrimp will eat any starfish in the tank. So, if you have some decorative starfish species in your system you’d better get it out. They will kill and eat it no matter the size.

When the job is done, some people will purchase a chocolate chip starfish to feed to the Harlequin shrimp. They often keep it in the sump where they cut off a leg every week or two and feed that to the shrimp. By the time that it has been done feeding on that arm, starfish will regenerate it back, so they cut off another arm and just kind of keep that cycle going.

If you are not one of these people or simply do not have the heart for this, you can always return Harlequin shrimp to pet stores or give it away to other fellow reefers.

You can read more about it in my article “Harlequin Shrimp – Detailed Guide: Care, Diet, and Breeding”.

Asterina starfish do multiply very fast and get out of control pretty rapidly. Although some people get lucky for years. Do not be tricked, they are not your friends!  Not only do they become a nuisance but they also can start attacking coralline algae, polyps, and corals or simply irritating them.

Although it is possible that some species can be less harmful than others, I would still recommend removing all of them the moment you see them. The problem is that there is no easy way to tell which are bad ones or supposedly good ones. Do not let them settle in because it is tough to get rid of them.

One thought on “Asterina Starfish. Friend or Foe?”