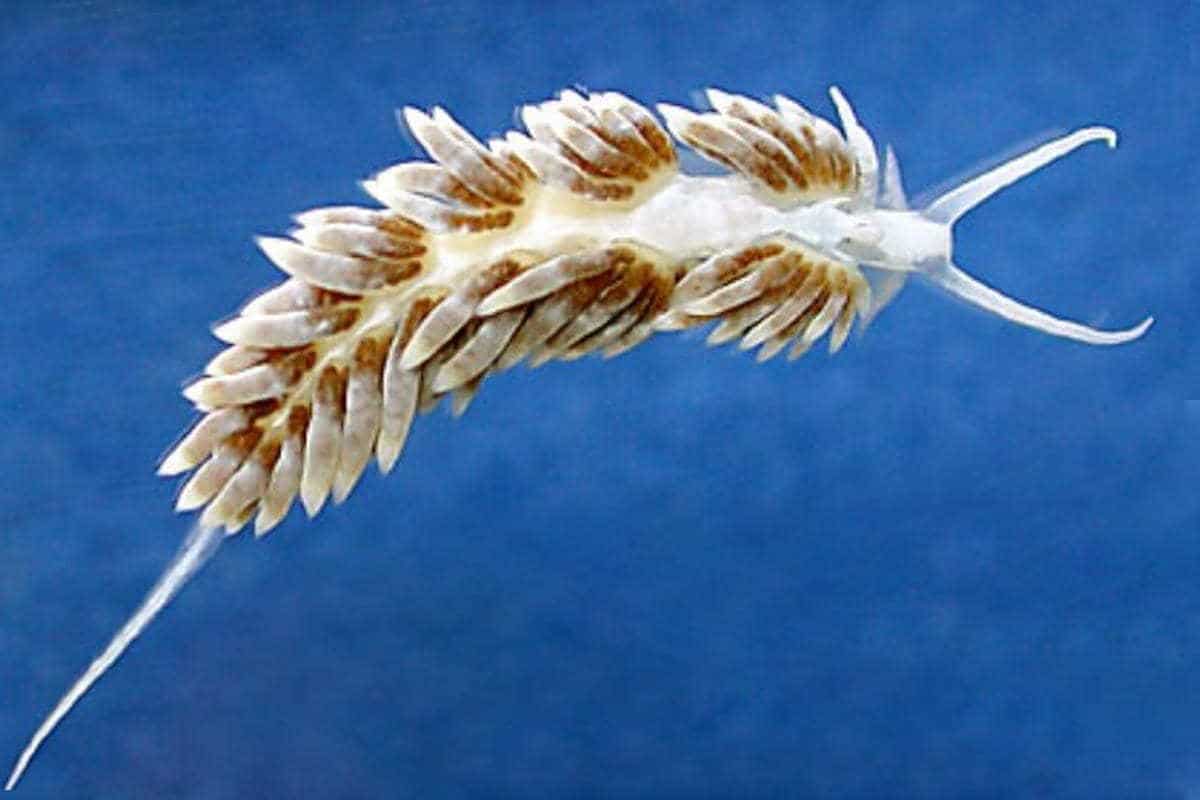 Many saltwater hobbyists can attest to the fact that Aiptasia anemones can alter the balance of a well-established reef tank by overrunning it and inflicting harm on corals, fish, and invertebrates.

Berghia nudibranch is one of the best predators for combating Aiptasia in reef aquariums; they breed easily, eat Aiptasia non-stop, and are easy to care for. This nudibranch is a better alternative to using manufactured chemicals like Joe’s juice, ChemMarin Stop-Aiptasia, and other methods that are actually toxic to tank inhabitants.

If you have lots of Aiptasia in your reef tank; obtain some Berghia nudibranchs, sit back and watch these little guys do their thing!

Keep reading for more information on the Berghia nudibranch, this involves details on their physical attributes, breeding, stocking, acclimation, and so on.

What is Berghia Nudibranch?

Berghia nudibranch (Berghia stephanieae) is a miniature invertebrate or sea slug that is widely distributed in warm and temperate waters throughout the Atlantic Ocean, Carribbean and Mediterranean seas.

This organism is best known as a natural predator of the popular nuisance Aiptasia anemone which plagues saltwater aquariums.

Also, it is one of the most commonly sold Aeolid nudibranchs in the marine trade in North America, with a huge population collected annually from the Florida Keys region. 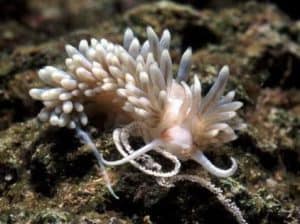 When it comes to appearance, Berghia nudibranch can be identified by its whitish or semi-translucent body. This sea slug has a conspicuous head that bears two long tentacles— these tentacles act as a chemoreceptor (to test food quality). At the back of the oral tentacles, you will spot the rhinophores; these look like the oral tentacles but they are visibly shorter, and they also function as chemoreceptors, helping to detect distant food sources within the environment.

Furthermore, the eyes of Berghia can be located behind the rhinophores; these are capable of rudimentary vision and light sensory.

At the back of the nudibranch are multiple protrusions or tassels known as cerata, and they are regarded as an extension of the digestive system.

The cerata is responsible for two main roles— they facilitate oxygen exchange and bear cnidosacs at the tips. These act as a defensive mechanism and contain nematocysts i.e. stinging cells which they obtain from Aiptasia anemones consumed.

Berghia nudibranch absorbs immature nematocysts from Aiptasia and allows them to mature within. The nudibranch is capable of releasing the cerata which contain stinging cells to ward off aggressive predators.

In addition, Berghia nudibranch are known to hold zooxanthellae — the photosynthetic symbiotic algae found in corals, through symbiosis the sea slugs can utilize zooxanthellae obtained from their prey (Aiptasia) as an alternative food source. However, this food source is not capable of sustaining Berghia nudibranchs for long periods, hence they must be offered ample supply of Aiptasia to survive. 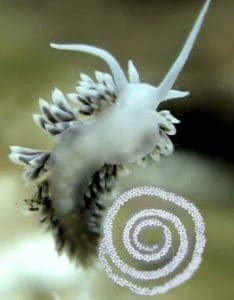 These sea slugs are hermaphrodites, therefore each one has both male and female reproductive organs. Therefore, there need to be two nudibranchs present for mating and fertilization of eggs to take place within the tank.

Berghia nudibranchs usually reach maturity when they are 2 months old. They readily spawn in captivity.

Berghia lays eggs in the form of a spiral strip which is regarded as an “egg ribbon”. These egg ribbons are usually laid in hidden spots like the underside of live rock, beneath a large live coral or macroalgae, and sometimes, on the aquarium walls.

Juvenile nudibranch may lay about 50 eggs, though this can reach 60 – 80 eggs per strip while adults are capable of laying more than 1000 eggs in a single egg ribbon. Eggs are laid every 1-2 days per individual.

Under optimal temperature conditions, these eggs typically hatch in about 10 – 14 days with the newly-hatched nudibranchs emerging as free-swimming veliger larvae.

The metamorphosis from veliger larvae to juveniles takes up to 48 hours, and at this point, they measure about 600 micrometers in size, a significant change from 200 micrometers in Berghia larvae.

The lifespan of Berghia nudibranch ranges from 10 months to a year if favorable conditions exist while in captivity.

According to the study, feeding regimens and intraspecific competition for food play a huge role in the mass breeding of nudibranch. For example:

Berghia nudibranchs are reef-safe, they mostly go about their business which is to hunt down every Aiptasia anemone in the reef tank.

They are actually non-toxic, much safer, and effective than other available natural predators that consume Aiptasia. Even when Berghia dies or get injured, they will not alter water quality or release toxins into the tank water.

Also, they will not harm corals and fish in your reef aquarium.

How Many Berghia Nudibranchs Are Required?

Let’s say, if you have as little as 3 – 5 Aiptasia in 40-gallon (160 liters) tank then it’s advisable to use other methods, the reason being that the Berghia nudibranchs may starve before they can even locate the few Aiptasia anemones in your tank.

However, if you have a moderate-heavy Aiptasia problem, it is recommended to introduce Berghia nudibranchs to glide through the small rock crevices, tubings, overflows and other tight spaces in search of Aiptasia anemones to eat.

You would be needing a good population of Berghia nudibranchs to eliminate the anemones outrightly, keep in mind that the introduction of a high number of Berghia translates to a population explosion— a significant increase in the population of Berghia in your tank since they will mate and reproduce. Some may die in the process, so it’s good to have enough to multiply and carry out a proper clean-up.

How long will it take for Berghia to clear my tank of Aiptasia? 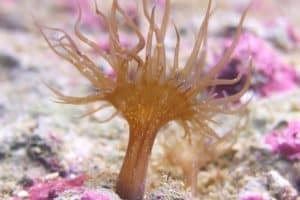 If you follow the recommended stocking formula and everything goes as planned, it will take about 2-3 months for Berghia nudibranchs to rid your reef tank of these pest anemones especially if the situation is a heavy one.

Do not expect an immediate or overnight fix, rather little by little, bite after bite, the Berghia nudibranchs will gradually devour every morsel of Aiptasia in your reef tank.

In the first week, it may look like there is no change in the situation, but after a few weeks, you will notice a significant reduction in the Aiptasia population. The real action commences when the Berghia nudibranch population reaches critical mass, so be patient.

Eventually, the tank will be completely free of Aiptasia anemones, then you can remove the nudibranchs out of your tank.

Acclimating newly purchased Berghia nudibranchs before adding them into the aquarium is very important. Berghia nudibranchs are fragile marine invertebrates, hence they must adjust properly to the new environment before being deployed into the tank to consume Aiptasia.

First, float the container (vessel) in your display tank or sump to acclimate water temperature for 15-20 minutes.

Secondly, using a drip acclimation kit, start to drip aged aquarium water into the container. Maintain a drop rate of about 5-10 drops per second for an hour.

Afterward, place the Berghia nudibranchs on a live rock close to Aiptasia anemones, not farther than 2-3 inches (5 – 7 cm) away. Placing them away from a live rock may expose them to high currents in the water column and they do not like high-flow areas.

For best results, make sure to place Berghia nudibranchs in groups instead of isolating each one. In addition, never try to handle Berghia nudibranch with your hands, rather you should use a pipette to suck up one Berghia at a time and drop them directly on a rock near the Aiptasia.

Another beneficial tip is to feed your fish adequately while acclimation of Berghia is still in progress, turn off the aquarium lights, as well as the pumps and powerheads to halt water movement. Give the nudibranchs 10-15 minutes to latch onto the live rocks, then turn the equipment back on.

What happens when you introduce Berghia nudibranchs into the aquarium

At first, it might seem like they completely vanished into thin air. Don’t panic, it is normal for Berghia to go into hiding after being added into a reef tank.

Berghia nudibranchs are nocturnal, thus you are likely to see them more at night rasping at the surfaces of live rocks to pick off every single piece of Aiptasia they can find. They will keep at this pace till the whole Aiptasia population has been totally eradicated.

Species That Prey On Berghia Nudibranchs

There are certain species of saltwater fish that are known to prey on Berghia nudibranchs, these include:

These fish species wouldn’t think twice before attacking and making a snack out of your nudibranchs.

Other threats include the renowned:

In spite of their peaceful temper, there are also reports that Peppermint shrimp and Boxer Crab (Lybia tesselata) might bother nudibranchs from time to time as well.

This species of Aeolid nudibranchs is a bit pricey in the aquarium trade, it costs between $10-30 for a single specimen, with size being the major price determinant.

You may be unable to find Berghia at your local fish store due to its high demands, in that case, you can place an order through an online store that has it stocked and it will be shipped to your doorstep at an additional cost.

What to do with your Berghia nudibranchs once Aiptasia is gone?

Instead of letting your Berghia nudibranchs die from starvation, you can collect all and pass it along to people in need of them.

A lot of marine hobbyists are battling with the Aiptasia problem in their reef tanks, thus giving out a little quantity of Berghia is like handing them the solution on a platter.

Berghia nudibranch is the ultimate solution to Aiptasia infestation in saltwater aquariums. To combat this, there has to be a significant number of Berghia to be able to clamp down on the Aiptasia population and eliminate them completely in the long run.

With proper care and handling, optimal water conditions, and the absence of predators, Berghia will be able to cure the Aiptasia problem without disrupting the health and stability of your reef tank.

Keep in mind that when the pest issue has been sorted, you are required to find a new home for these sea slugs.