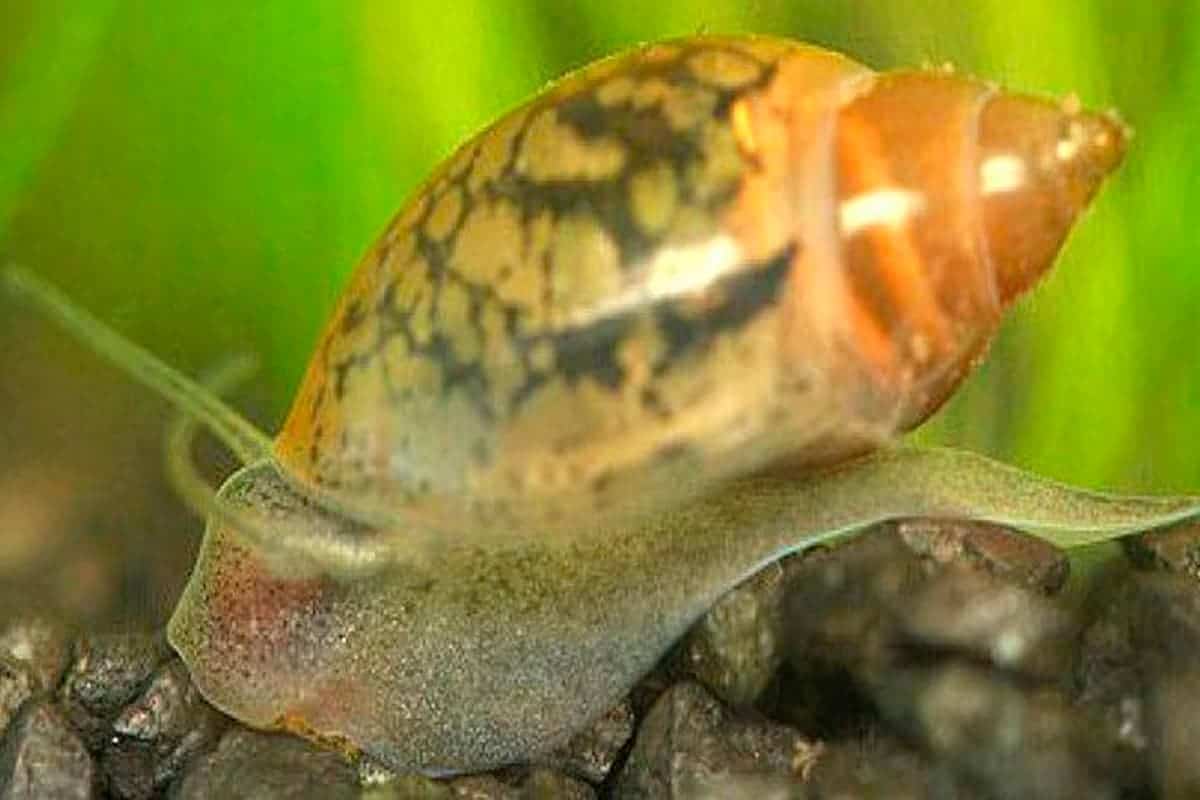 Bladder snails (Physa acuta) are arguably the most well-known example of invasive freshwater snails. The aquarium trade, and the increasing popularity of ornamental animals and plants is the main reason for the spread of this species in the hobby.

Bladder snails are hermaphrodites, prolific breeders and can survive in polluted waters. They are extremely adaptable to a wide range of environments including extreme temperatures and salinity. However, they are also very good at keeping aquariums clean.

There are a lot of debates about these snails in the aquarium hobby. Some people hate them and try to get rid of them. Others find them beneficial and do not mind having them in the tanks or breed them for feeding pufferfish, predatory snails, crabs or crayfish.

You can read more about it in my articles “How to Remove Snails from a Shrimp Tank” or “Benefits of Snails for a Shrimp Aquarium”.

Bladder snails used to have an incredibly bad reputation. However, despite being so notoriously famous, we do not know much about them. Almost every article and guide about Bladder snails repeat the same general and trivial content. It is like everyone has them, nobody knows them.

I do not want to be superficial. In this guide, you will know facts and details about Bladder snails that you will not find anywhere.

Natural Habitat of the Bladder snails

The invasive snail Physa acuta has spread through the continents of Asia, Africa, Australia, Europe and South, and North America. Basically, Bladder snails occur on all continents except Antarctica.

Interesting facts: This species was first described in 1805 by Draparnaud from the River Garonne near Bordeaux (France). This led to the early speculation of a European origin for the species. It is now established that North America is the native range of the species.

On a worldwide scale, the ease with which the Bladder snails can spread is a real concern even for governments. For example, Physa acuta species is currently the second most widespread alien invader freshwater snail in South Africa.

Description of the Bladder snails

Bladder snails have a pair of fine, threadlike sensory tentacles with eyes at their base as clear black spots. The mantle is colorful with yellow-orange spots.

The body is gray and covered in fleck spots on the top mantle under the shell.

The life span ranges from 3 – 12 months and greatly depends on the environment temperature.

Interesting fact: Although they are sensitive to copper exposure, Bladder snails’ oxygen transport is not accomplished by hemoglobin, as in humans, but by a similar enzyme that contains copper (hemocyanin). That is why, at oxygen saturation, their blood turns from colorless to pale blue.

The Behavior of the Bladder snails

Unlike many land and freshwater snails, which can retreat into their housing and close it with a lid (operculum), Bladder snails do not have it. Instead, to avoid being snatched by predators, they can flick their shells quite rapidly back and forth.

This species can also swim upside-down at the water’s surface to breath air. In case of danger, the snail can expel the air from its respiratory system and quickly submerge to the ground.

Bladder snails do not dig but can crawl through the water at an amazing speed.

I have seen countless posts on forums where people have had problems with distinguishing Bladder snails (Physella acuta) from Pond snails (Lymnaea stagnalis, read more about it). Very often aquarists use these names as synonyms when they refer to pest snails in the tanks. As a result, it only creates more confusion and misunderstanding. 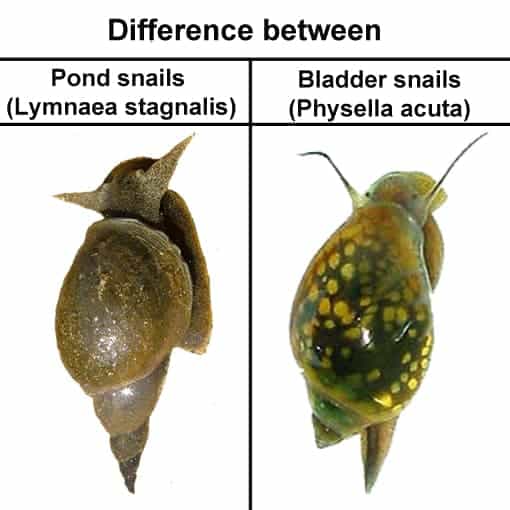 How do we get Bladder snails?

The most common way of getting Bladder snails (or any other snails) is from plants. They are “professional” hitchhikers. Therefore, if you do not want any unwelcome visitors in home aquariums, you need to quarantine everything (plants, leaves, driftwood, stones, decorations, etc.) that you are going to put in the tanks.

For more information, you can read my article “How to Quarantine and Disinfect Aquarium Plants”.

They are ultimate cleaners for the fish or shrimp aquariums who eat on a continual basis. Actually, Bladder snails are so good at it, that any overfeeding will trigger snail infestation.

They are like an indicator of the food balance in your tank.

Yes, Bladder snails are plant safe. They will not touch any healthy plant in the tank. They simply do not eat healthy, living plant material.

Unfortunately, people sometimes confuse grazing on with eating the plant. Even if you see them eating a “healthy” plant, it is not as it seems. It means that the plant is dying, although, it has not shown yet.

They will trim and eliminate any vegetation that is dead or decaying, leaving the plants to look like they have been attended by a gardener.

Calcium is probably the most important thing for a snail. Like all snails, Bladder snails rely on calcium for the growth of their shell.  They are highly dependent on calcium availability for survival, demonstrating reduced growth rate, survival and reproductive output in low calcium environments.
Therefore, if you are planning to keep them in your tank, you can add eggshells, cuttlefish bones, etc. and your snails will be fine.

In this section of the article, I usually write about ideal water parameters, basic tank setups, etc.

This time there is no need for that because Bladder snails are probably one of the most resistant creatures in the aquatic hobby. They are very robust and undemanding in terms of water hardness, temperature, and pH.

In the wild, they survive in industrially polluted waters. Bladder snails were found in sewers. No wonder why one of their common names is ‘‘Sewage snail’’. In some cases, aquarists use them to cycle their tanks (read more here).

One of the problems with them is that they might eventually clog a filter intake or other parts of the filter. So, if you have lots of snails, check it from time to time.

Bladder snails are simultaneously hermaphroditic freshwater snails with a sperm storage organ. It means that they have both male and female reproductive organs, and can reproduce both through internal self-fertilization and through cross-fertilization (mating). 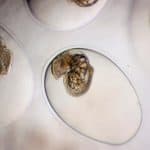 Although they have two ways of reproduction, the main one is still through mating. They approach and climbing onto the shell of an intended female, crawling to the ‘female’ gonophore. The copulations may last up to 30 minutes.

Bladder snail reaches female maturity between 28 and 42 days (at 20 – 22 C) (after passing a short male stage). At the time of reproductive maturity, the snails are on an average 6 mm (0.25 inches) in shell length.

According to recent studies, they do not have consistently preferred gender role. Gender preference may even change within an individual during the course of a mating session. 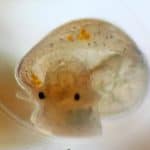 They lay transparent eggs within capsules. Each egg capsule contains 10 − 40 eggs and the hatchability remains between 70 and 90%. Hatching of juveniles (∼1 mm in length) occurs 6 – 7 days after egg-laying.

According to the results of the experiment:

Depending on the temperature, incubation periods can also range from 4 – 15 days.

Bladder snails are excellent feeders for Assassin snails, Crayfish, Loaches, Pufferfish, Oscars, etc.  Besides that, they can live and thrive anywhere.

There are some reports that Asolene spixi snails can also feed on Bladder snails if they are very hungry.

Bladder snails have invaded practically all freshwater aquariums in the world. They can survive under harsh conditions and overpopulate the tank in a short time. It can starts with a few and turn into hundreds very fast. The snail is characterized for its ability to produce surplus eggs and comparatively short generation time.

Bladder snails are absolutely harmless creatures and safe with plants. They will eat algae and keep your tank clean. So they are not all bad. Just do not overfeed.