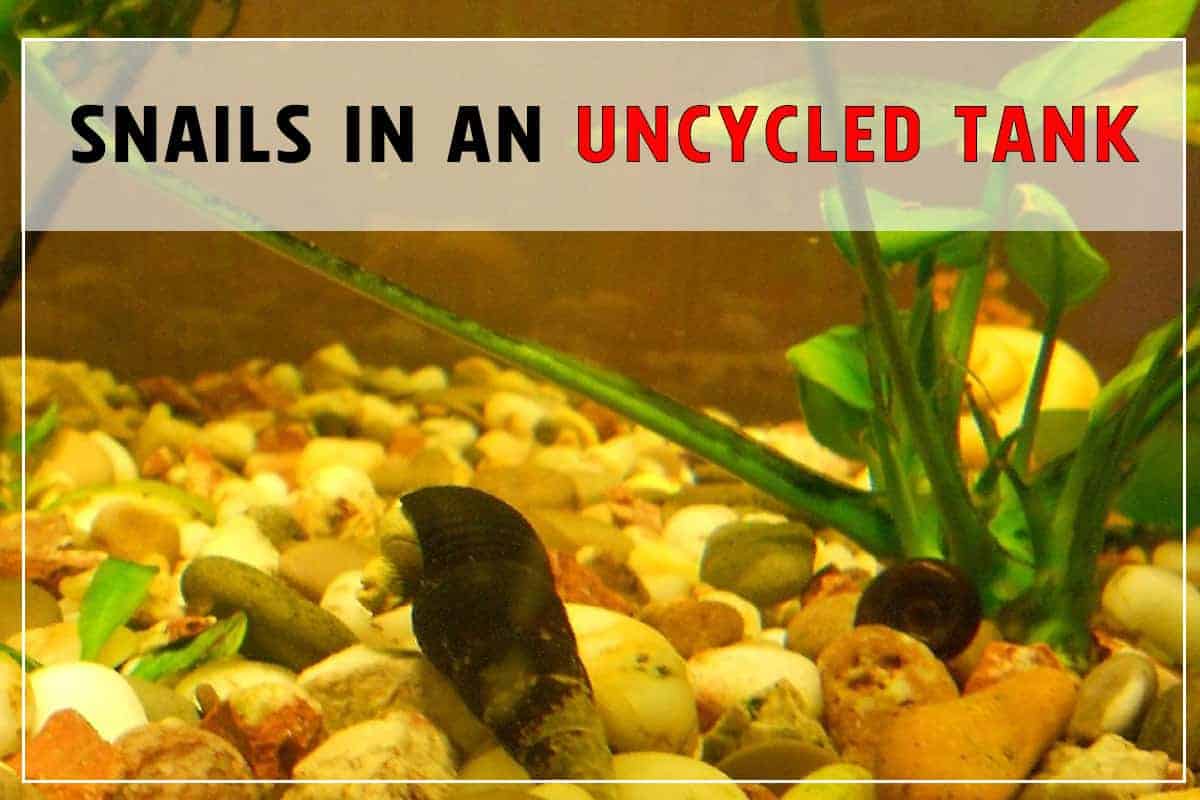 In general, it may be possible to put snails in the uncycled tanks without causing a lot of harm to them (if any). However, it also strictly depends on the species, because some snail species are so hardy and resilient that can live even in polluted waters whereas others will die easily.

This short article is written to educate beginner aquarium keepers about freshwater snail species and their reaction to ammonia, nitrite, and nitrate spikes.

The Danger of Uncycled Tank for the Snails

Note: Unionized form of ammonia is more biologically toxic than ionized (NH4+) because of its easier penetration through biological membranes.

Lots of tests and experiments showed that many freshwater snails demonstrated they were sensitive to ammonia.

According to the study, depending on the species, ammonia can cause death to aquatic animals via:

However, even if snails manage to survive, toxicants like ammonia often affect physiological processes and behaviors at concentrations far below lethal levels. Unfortunately, these effects can still have strong implications for fitness if behaviors like predator avoidance, food acquisition, or reproduction.

What is the Reason of Putting Snails in an Uncycled Tank?

The objective here is to grow beneficial bacteria to consume nitrogenous waste (ammonia and nitrites).

So, through urination or defecation, snails produce a lot of waste matter generated during metabolism in the form of ammonia.

As a result, beneficial bacteria will have enough food (ammonia and nitrites) to thrive. This is nature’s way of recycling nutrients.

Freshwater Snails That Can Survive in Uncycled Tank

For the uncycled tank, we will need an elite category of animals known as extremophiles, or snails that can survive environments that most others cannot.

The downside of such snails is that in most cases they are also considered to be pests or invasive species. Therefore, once introduced into the tank, it can be really hard to get rid of them, if you need to.

For example, according to the study, it was also found that some air-breathing freshwater snails can tolerate extreme ammonia levels.

Note: In science, LC50 is the lethal concentration required to kill 50% of the snail population. 1 ppm = 1 mg/l

Melanoides Tuberculata (or Malaysian Trumpet Snails) were found in polluted waters with more than 1.63 NO3 (mg/L) where they thrived. It means that this species will easily tolerate significantly higher ammonia as well.

These snails are true survivors in every sense of the word. They can live even through the cycling process. Their tolerance to ammonia spikes is incredible.

Freshwater Snails That May Survive in Uncycled Tank

Some snail species can be is very adaptable. They exhibit tolerance for ammonia but an extreme environment may have lots of negative aspects (including a high mortality rate).

Freshwater Snails That Should Not be Put in Uncycled Tank

Most ornamental snail species cannot tolerate ammonia, nitrite, and nitrates. Thus, it is strongly recommended to have a cycled and fully established tank.

These snails should not be used in uncycled tanks. There is a very high chance that none of them will survive the cycling process.

Some freshwater snails are so hardy that they can easily be used to speed up the cycling process.

However, in most cases, it is not advisable.

Even though many other snail species are tolerant to ammonia, nitrites, and nitrates, it is not recommended to test their limits. The most susceptible organ of invertebrates is the gills (lungs). Eventually, a high level of nitrogenous waste will cause severe damage and shorten their lifespan.

Due to the fact that scorpions comprise a few thousand species, it is absolutely not possible to mention all the anatomical differences between them in one article. Therefore, I will describe the...

Arachno-hobby has been increasing for the past few decades. More and more people keep scorpions as pets. Unfortunately, owing to the difficulties involved in the identification of the...