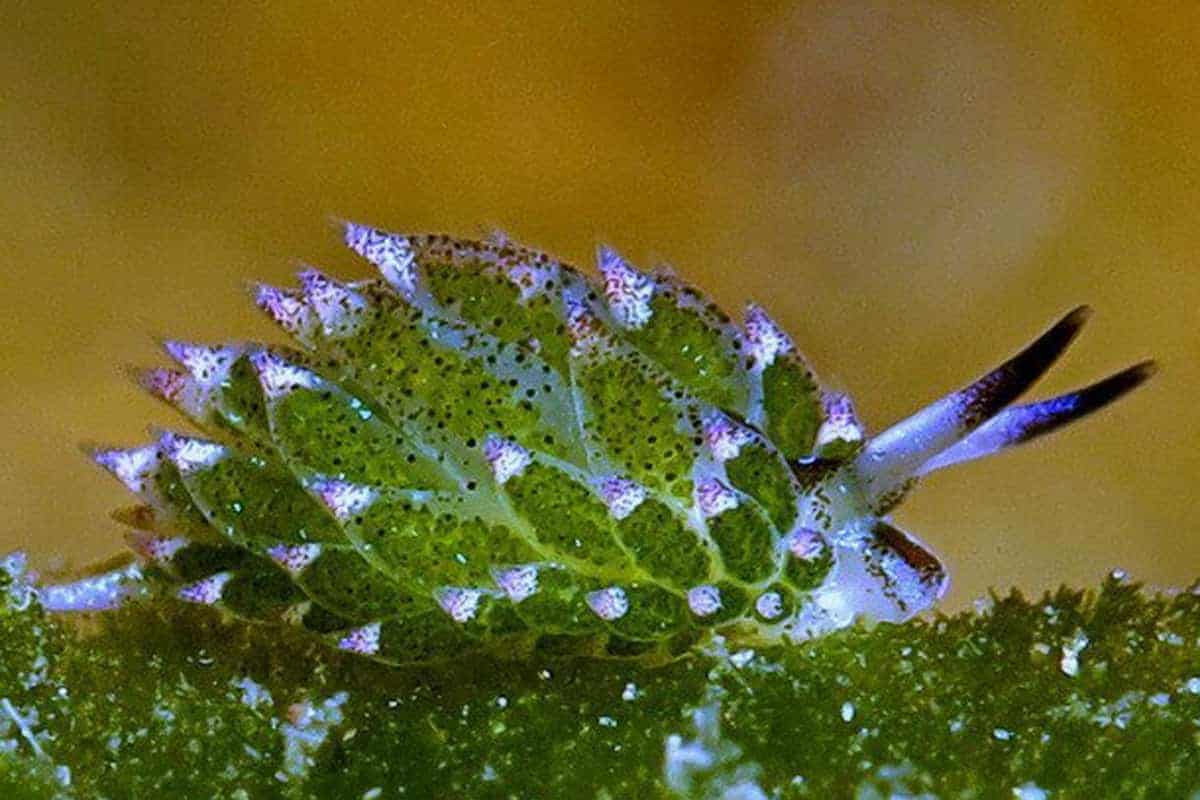 Costasiella kuroshimae which is informally known as “Leaf sheep” or “Leaf slug” is, without doubt, one of the most adorable and sophisticated marine creatures in the world.

This cute sea slug resembles a terrestrial sheep in an unusual way and packs a superb ability to create its own energy by means of photosynthesis. Quite mysterious yet possible, the Leaf sheep is able to retain chloroplasts obtained from the algae it consumes, enabling it to utilize the chlorophyll to perform photosynthesis whenever it needs to.

Now, let’s walk you through the origin and physical attributes of Costasiella kuroshimae as well as how to care for them in a reef aquarium.

Notably, this species was discovered in the year 1993 off the coast of the Japanese Island, Kuroshima. Little wonder why its scientific name is Costasiella kuroshimae, directly hinting at the type locality “Kuroshima” in Okinawa, Ryukyu Islands.

The taxonomical hierarchy of this Sacoglossan sea slug is as follows:

Costasiella kuroshimae can be found in reefs off the coasts of Japan, Indonesia, and Philippines. This sea slug inhabits shallow saltwater environments which contain ample amounts of green macroalgae. 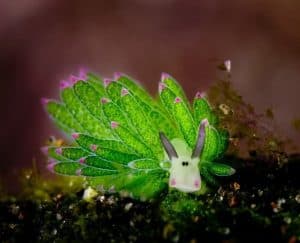 The slug has small, black beady eyes and two highly sensitive antennae (rhinophores) that sit on the top of its white head, and these antennae can be likened to the ears of a sheep.  Little brown streaks are visible behind the small eyes and midline of the head.

The prominent rhinophores (white with black tips) are known to possess fine hairs that are capable of sensing chemicals in the water, hence aiding the Leaf sheep to locate food sources.

That’s not all, Costasiella kuroshimae has a small body with multiple spiny projections (cerata) on its back. The cerata are arranged in rows of 7 and shaped like leaves. Generally green in color with iridescent dots scattered all over, and white/pink hue at the tips.

The most interesting thing about Costasiella kuroshimae is its ability to photosynthesize. Through a process known as Kleptoplasty, the Leaf sheep and some other Sacoglossan (sap-sucking) sea slugs are capable of stealing chloroplasts from the algae they consume. The stolen chloroplasts are incorporated into their bodies and can be used for photosynthesis at a later period. This plant-like trait allows the Leaf sheep to survive off energy from photosynthesis for a while in the absence of food.

Adaptive features of the Leaf sheep to this feeding behavior consist of the presence of a large surface area to maximize the ability to photosynthesize, and a translucent skin to increase light penetration.

On blogs and forums, most people erroneously refer to Leaf sheep as a “nudibranch”, however, it’s false, and we would like to clear this misinformation. All nudibranchs are sea slugs but not all sea slugs are nudibranchs.

There are several sub-classifications of Gastropods, and the Leaf sheep (Costasiella kuroshimae) doesn’t belong to the order Nudibranchia, instead, it is a member of Sacoglossa (sap-sucking sea slugs). Due to this reason, Costasiella kuroshimae should not be regarded as a nudibranch.

Some members of Sacoglossa are known for their unique ability to sequester and utilize the cellular contents of algae— chloroplasts for photosynthesis, hence why they are termed “solar-powered sea slugs”.

Additionally, Sacoglossans can be differentiated from other related groups by the presence of a single row of sharp teeth on the radula, which is adapted for their sucking feeding habits.

You can also read “Berghia Nudibranch in Reef Tanks”. 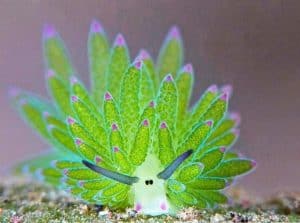 Costasiella kuroshimae are obligate algae-eaters; they are known to nibble on the Chlorophyte “Avrainvillea”, often sucking out and retaining the functional plastids (chloroplasts) in their bodies to be able to photosynthesize later.

By sequestering the chloroplasts from the algae they consume, they can perform photosynthesis to obtain energy when their primary food source is scarce, the exact duration of this short-term sustenance is unknown.

To ensure this sea slug’s survival, you have to make green macroalgae available in the reef tank, and this shouldn’t just be any kind. According to the study, in the wild, Costasiella kuroshimae is commonly found on the seaweed Avrainvillea, actively grazing and resting on its leafy surface.

Even more, some biologists believe that Costasiella kuroshimae are limited to one food source! Therefore, you stand a higher chance of keeping this sea slug alive if it has access to these algae to feed on.

Interesting fact: According to another study, Costasiella kuroshimae can survive for about 10 days without food in a natural day/night cycle.

Yes, corals are compatible with them. There are no reports of Costasiella kuroshimae causing problems with corals. They will not harm corals in any way, therefore they are safe for reef tanks.

Costasiella kuroshimae is difficult to care for, the reason being that the sea slug is particular about the food it eats and extremely picky as regards to the tankmates it can live with.

In my opinion that is the main reason why the Leaf sheep is not a popular choice in the reefkeeping hobby.

Nonetheless, if you decide to keep this species in your reef tank, make sure to maintain standard reef aquarium water parameters, and provide ample lighting to cater for the photosynthetic activities of Costasiella kuroshimae.

Because of their small size, there are no minimum requirements. The only thing that you need to keep in mind that when the tank is small, it is difficult to be in constant control over your water parameters where everything can go wrong very fast.

In my opinion, you should plan on housing them in a tank of at least 10-gallons. At the same time, Costasiella kuroshimae are so small that they will be lost in a big tank.

Due to the tiny size of this Leaf slug, it may get sucked into the overflows if there’s a strong current in the tank, thus it is important to keep the water movement low to prevent such occurrence.

Under no condition should inverts like lobsters, crabs, sea cucumbers, wrasses, and even some shrimp species (like Coral banded shrimp, Pistol shrimp, etc.) be introduced into the reef tank with Costasiella kuroshimae.

This critter is very small, thus it stands no chance against predators whether large or small. Hence, it’s advisable to keep Leaf sheep with peaceful fish species with little to no thirst for slugs, although this sea slug will often camouflage on seaweed and make attempts to defend itself by secreting mucus to serve as a deterrent.

There are no reports of Costasiella kuroshimae breeding in captivity.

Nonetheless, since Costasiella kuroshimae are hermaphrodites; two individuals will proceed to mate in the water, one of them (acting as a male) extends its genital and inserts it into the female genital pore of the other.

Fertilization occurs internally and eggs are laid in ribbons. The eggs will hatch after a few days releasing free-swimming veliger larvae into the water column, these larvae then undergo metamorphosis and become sea slugs.

Costasiella kuroshimae is scarce in the aquarium trade, probably because most aquarists are unfamiliar with the species or cannot cope with its demands. Anyway, you will be lucky to find this cute sea slug at your local fish store. The price is unknown, likely to cost a few bucks but we can’t say for sure.

The Leaf sheep make an interesting and unique addition to saltwater aquariums. This little reef invertebrate is beautiful and reef-safe, however, its downside is the preference towards a specific type of green macroalgae, susceptibility to predatory attacks, and short lifespan while in captivity.

You should only acquire this sea slug if you are willing to give it special care and attention since it cannot thrive on other food items neither can it survive in a tank full of aggressive tankmates.

Ignoring these caveats means you are bound to lose the Leaf sheep earlier than expected, and the death of a dear pet is something everyone dreads.