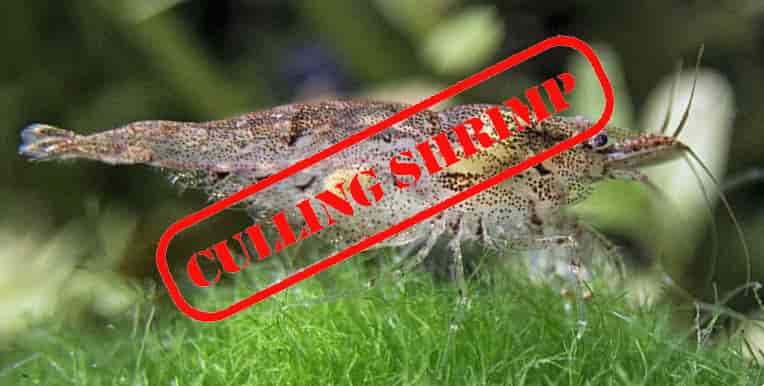 Culling shrimp is the process of removing or segregating shrimp from a breeding stock based on a specific trait. This is done to improve and exaggerate desirable characteristics or to remove and decrease undesirable characteristics. Some people do not like the word culling and use Selective breeding instead, which is basically the same. A lot of times when shrimp breeders are culling, they are selecting towards the standard either their own or written.

Culling shrimp, in contrast to mere breeding shrimp, defines controlled reproduction with a specific breeding goal. A culling goal is usually a certain phenotypic characteristic expression. Therefore, selective breeding is a method to achieve this goal.

However, in order to understand better how culling shrimp (selective breeding) works we need to remember school biology lessons first.

Gregor Mendel (1822 – 1884) was an Austrian monk and biologist who loved to work with plants by breeding the pea plants. He discovered the principles that rule heredity. Mendel combined a purebred yellow-seeded plant with a purebred green-seeded plant and he got only yellow seeds.

He called the yellow color trait the Dominant one because it was expressed in all the new seeds. Then he let the new yellow seeded hybrid plants self-fertilize and in this second generation, he got both yellow and green seeds which meant that the green trait had been hidden by the dominant yellow. He called this hidden trait the Recessive trait.

For example, Crystal Red shrimp and Crystal Black shrimp. The black color is dominant and the red color is Recessive. 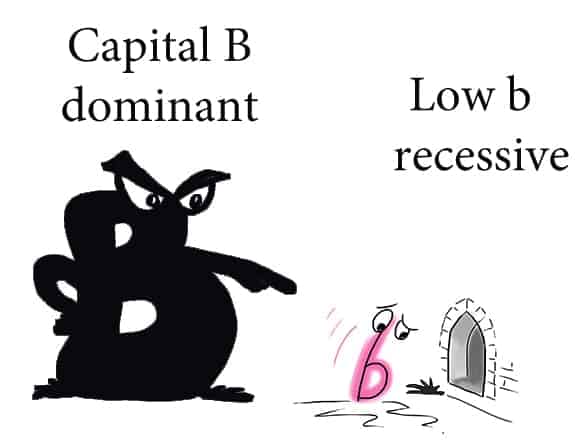 Mendel did not know about genes, but he did speculate that there were 2 factors for each basic trait and that 1 factor was inherited from each parent. Now we know that these factors are called Alleles and represent the different variations of a gene.

Phenotype
Phenotype – the visible or observable expression of the results of genes, combined with the environmental influence on an organism’s appearance or behavior. It is what you can see. 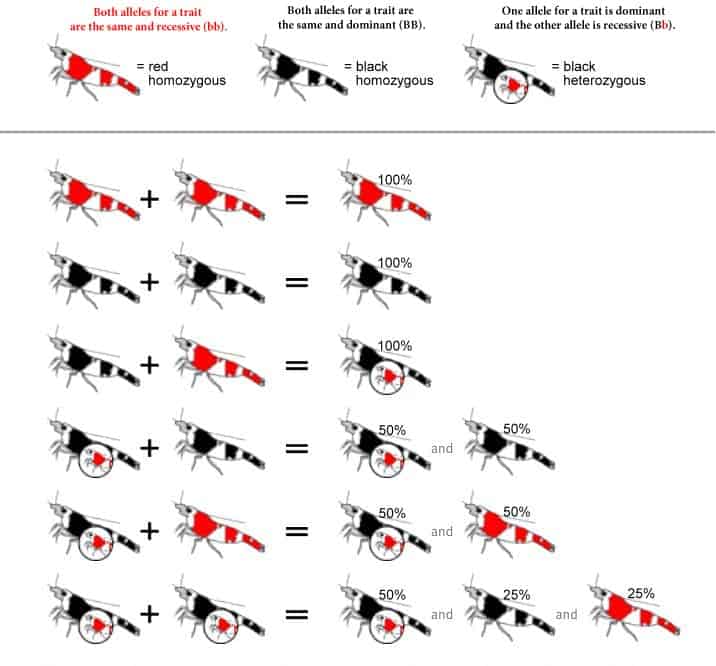 Inbreeding is the mating of closely related (genetically) shrimp. It is intentionally practiced to create the genetic uniformity of the shrimp. Inbreeding is generated by keeping small populations of shrimp during selection (for example, it is said that Crystal red shrimp strain was created from only 3 shrimp, making it extremely inbred and sensitive).

The downside of this method is that with every new shrimp generation they can start losing their coloration. It is called traits depression. However, this is not the only bad news. Moderate to high levels of inbreeding (> 10%) can:

The only way to fix this problem is to introduce “new blood” to the colony from time to time. New batches of shrimp will refresh the genetic pool and will make it more stable and stronger. Sometimes biologists also call it Interbreeding (genetically unrelated members of the same species).

What is Shrimp Linebreeding?

Linebreeding is a term usually used to describe milder forms of inbreeding. Typically it involves arranging matings so that one or more relatives occur more than once in a line while avoiding close inbreeding.

Crossbreeding (outbreeding) is the mating of two shrimp, who not only are the products of two distinctly separate lines but on top are not the products of linebreeding. In most cases, shrimp breeders use this term to describe the mating between two different species of shrimp.

What is a Mischling Shrimp?

Mischling is a German word for “crossbreed” shrimp.

Do We Need Culling? 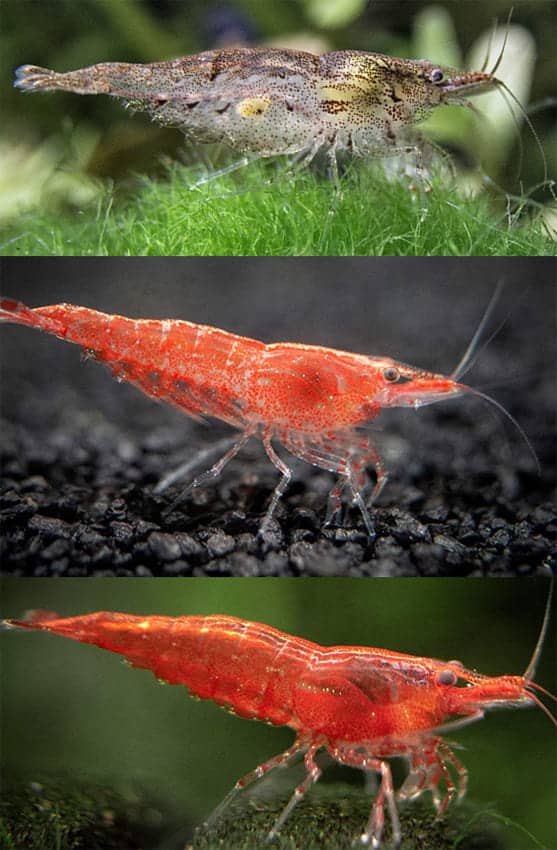 If you want to keep your shrimp colony looking as best as it can, well, actually, you do not have a choice. You will need to cull shrimp. Culling them will make your shrimp colony have better colorations and patterns. Otherwise, they will revert to a wild-type color. Therefore, the more you cull the more high-grade shrimp you will have in the tank.

How Often Should We Cull The Shrimp?

The more you do it the better is the result. Ideally, at least once a week or two. If you do not make a selection according to the brightness of the color, then in about 10 generations, the shrimp will lose most of their color.

How to Catch the Shrimp for Culling

If you have a big colony in a planted tank, it is very easy to miss undesirable shrimp. Therefore, stop feeding them for 2-3 days before culling. After that, when you put some food into feeding plates they would all come out into the open in 15-30 minutes. However, if you think that there are still more unwanted shrimp in the tank, remove the food and repeat the process the next day. At that point, you are most likely going to catch the majority of the shrimp. At least to the best of your ability.

Take a net and basically just scoop the shrimp out. Hold the net against the glass because quite often they can jump away. However, if you have a lot of plants in there or a lot of decorations, which you do not want to disturb then you can make a shrimp trap.

What to do with the culls?

There comes a time in every shrimp keeper’s life when they have to decide the shrimp’s fate.  Although shrimp have very little awareness about what is happening to them, a lot of people still ask this question because they feel responsible for their shrimp lives after all. I will try to name the most popular, quick, and painless ways.

Well, to tell the truth, all these charts are almost useless. Anybody who has been in shrimp hobby even for some time knows that Neocaridina species can crossbreed, and the same is with Caridina species (except Amano shrimp, Malawa shrimp, Red Nose Shrimp, and some others).

The good news is that shrimp with different genera will not crossbreed and can be safely housed together.

The bad news is that we do not always know the species or even the genus of the shrimp! Therefore, with so many unknowns, it is very difficult to make a definitive chart of what can and cannot crossbreed.

You can read more about “The Difference between Neocaridina and Caridina Shrimp” right here.

Creating your own color and pattern shrimp! Of course, it sounds really cool. Unfortunately, in reality, most of these shrimps will look like a wild version of their species – brown, patchy, strange, and ugly. It takes a lot of time and careful breeding to enhance a particular feature in the shrimp. So, if you are not a professional breeder, I do not see any reason even to try it.

The best you can do is to maintain the quality of your shrimp colony by culling them and adding “fresh blood” once in a while. Otherwise, you risk having traits depression and the shrimplets will turn “wild” color.