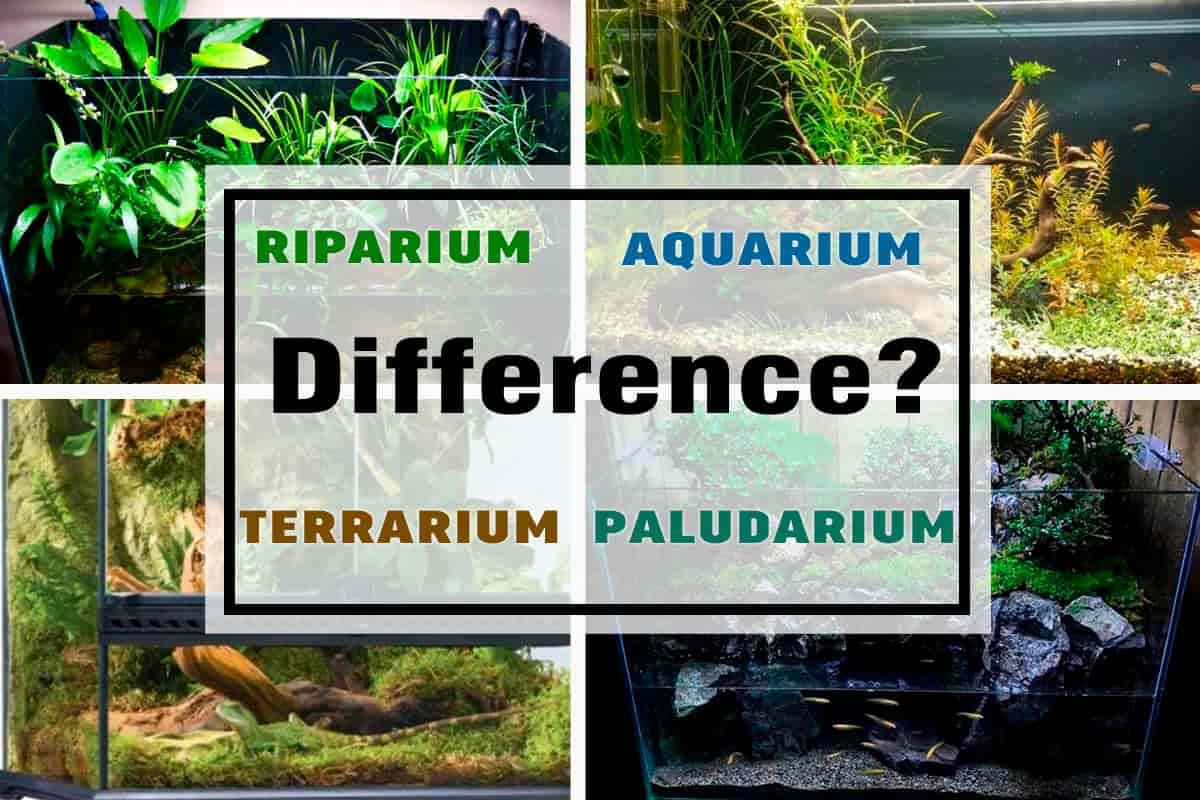 Today we are going to clarify the difference between Aquarium, Terrarium, Riparium, and Paludarium.

It is not a secret that people often use the term “Aquarium” to describe any containers used for growing aquatic plants, land plants or keeping any kind of animals. On the one hand, it is convenient. On the other, this approach adds a lot of confusion.

It will not be absolutely correct to say but the term ‘Aquarium’ became too broad to have meaning anymore. Today more than 100 million people worldwide have different biotopes* where they keep a wide range of plants, corals, fish, crabs, terrestrial crabs, land snails, scorpions, ants, snakes, lizards, etc.

Note: Biotop (from the Greek bios, “life” and topos, “place”.) or ‘the Habitat’ is an area of uniform environmental conditions providing a living place for a specific assemblage of plants and animals.

So, what is the difference between Aquarium, Terrarium, Riparium, and Paludarium?

Without further ado, let’s get started.

The difference between Aquarium, Terrarium, Riparium, and Paludarium

First of all, I’d like to start off with Vivarium. The point is that Aquarium, Paludarium, Riparium, Terrarium, Florarium, Insectarium, etc. are different types of Vivarium.

A Vivarium is a Latin word (‘Vivere’’) meaning ‘To live’. Therefore, technically absolutely any enclosure for an animal or plant, designed to provide a stable environment, is a vivarium. It is basically the general term for any biotope tank.

Sometimes people use term Vivariums to specifically describe the recreation of an ecosystem for a particular species with controlled environmental conditions on a smaller scale.

Note: I need to mention that some people do not include plants and say that vivariums are primarily for raising animals, not plants. Frankly saying, I do not agree with such an interpretation of this term. However, this is the point of personal perception and views.

The word ‘Aquarium’ was borrowed from Latin ‘Aquārium’, (neuter of aquārius) meaning ‘Pertaining to water’. Therefore, the aquarium is a tank of water in which live fish, other water creatures and plants are kept. 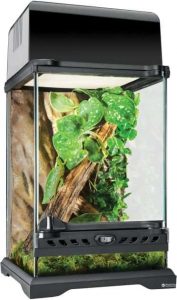 The word ‘Terrarium’ also comes from Latin ‘Terra’ (meaning ‘Earth’) +‎ -arium (arium is a suffix occurring in nouns describing an artificial environment for plants or animals), by analogy with the aquarium.

History says that the first terrarium was accidentally created by botanist Nathaniel Bagshaw Ward in 1842 when he was studying insect behavior and left one of the jars unattended. A plant spore grew into a plant, and this jar resulted in the first terrarium in the world.

The main feature of the terrarium is a relatively dry environment with low humidity and live plants. In general, terrariums are essentially small greenhouses that replicate natural environments for the plants.

Sometimes people say that terrarium is a self-sustainable ecosystem with a living, growing plant inside a sealed container where water, plants, soil, and air combine to work through the natural processes of photosynthesis, respiration and water cycling.

Well, it is not true.

It is important to differentiate between different types of glass enclosures. There are two types of terrarium: sealed and open. Actually, the most helpful aspect of terrariums is their front-opening door.

It will be inhumane to seal lizards, chameleons, snakes, etc. in a bottle! Glass terrariums are designed for airflow. That is why they often have screen mesh venting at the top of the container and venting at the lower portion of one of the sides, often the front.

Important: Do you know that aquariums often have a mark as terrariums because they are made of thinner glass? These ‘aquariums’ cannot handle the weight and pressure of being filled with water. 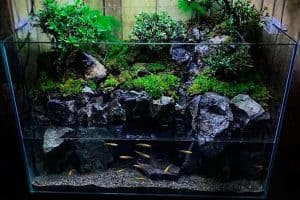 Paludarium is also often called Aqua-terrarium. The word ‘Paludarium’ has Latin roots as well. It means Latin: palus = swamp or marsh.  It is specifically semi-aquatic.

In other words, paludarium is basically a terrarium with a body of water. This biotope has both aquatic and terrestrial features and extremely popular with aquatic enthusiasts. Paludarium allows simulating wetland or rainforest zones.

It is an enclosure for keeping aquatic, submersible, coastal and terrestrial plants, and animals in high humidity (“swamp” conditions).

Due to the fact that the paludarium is dominated by flora with surface vegetative parts, there is no specific need for an additional supply of CO2. Plants grown emersed will have plenty of CO2 in the room air.

As a result, most aquatic plants in this variant of the vivarium grow large colored leaves that do not develop in a conventional aquarium. The stems and foliage of the plants can extend quite far beyond the surface of the water.  Often, many aquatic plants begin to bloom frequently.
Note: However, if some plants are grown underwater (submerged) then CO2 will be of great benefit.

Read more about it in my article “How to Set up Paludarium”. 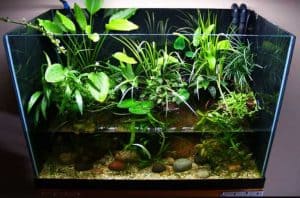 Riparium (from Latin riparian is translated as ‘Coastal’, ‘Bank’ or ‘Shore’) is a type of plant aquarium that is quite similar to the paludarium. However, it differs from the latter in the land area and the way flora planted.

The main goal of a riparium is to imitate a small shoreline or riverbank. Riparium does not have high and massive shores compared to paludarium. On the contrary, it has a very small piece of land at the sides of the enclosure.

In the paludarium, you can have all kinds of plants (submerged, floating or terrestrial plants). Paludariums use a built-up hardscape to support the planting. While in riparium, the plants are usually planted in special floating containers that are attached to the rear wall of the artificial reservoir. Gradually growing, the flora covers the containers, making them hidden to the eye.

In addition, paludariums often contain aquatic turtles and various amphibians, while riparium is not suitable for these animals since there are almost no land areas in it. Riparium is best suited to keep fish, freshwater crabs, dwarf shrimp, crayfish and snails.

Ripariums usually do not require high humidity. Therefore, they can be covered with a glass top or open to the air with no top at all. In fact, plants, which are growing out of the tank, often create the “WOW” effect.

So, the main features of any riparium:
Habitat: Almost completely filled with water.
Animals: Fish, shrimp, aquatic crabs, aquatic crayfish, aquatic snails, etc.
Plants: Any plants if there is enough land for them.

What else do We have?

Insectarium (from the Latin ‘Insectum’ – insect) – a special box (tank) made of glass or plastic designed to contain and breed insects, as well as other arthropods such as spiders, beetles, cockroaches, ants, bees, millipedes, centipedes, crickets, grasshoppers, stick insects, scorpions, and mantids.

Basically, Insectarium is another type of vivarium. The largest insectarium in the world is the Montreal insectarium, founded in 1990 by Canadian entomologist Georges Brossard.

Note: In my opinion there is no real difference between insectarium and closed terrarium. The only feature is the type of animals kept there, for example, you will not see reptiles there.

Formicarium (from the Latin. Formic – Ant) is also commonly referred to as an “Ant farm”. This is a type of vivarium that consists of ant colonies (nests). The plural form of formicarium is formicaria.

You will be surprised to know how many people in the world keep ant empires!
In the early 1900s, a French engineer Charles Janet made the very first ant formicarium to observe and study the ants. His concept of the 2D ant nest lays in the origins of a hobby. 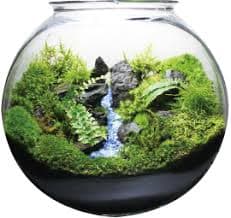 The word ‘Mossarium’ was created by analogy with all the above-mentioned types of vivariums. Basically, it is a clear enclosure used to grow specifically moss or ‘A container of moss’. In addition, there are also three types of Mossarium: moss-terrarium, moss-aquarium or moss-paludarium. There is no need to explain why they are called this way, right?

The difference between Aquarium, Terrarium, Riparium, and Paludarium lies in the way all these types of vivarium are created. However, the easiest way is to look at the amount of water in the enclosure.

2 thoughts on “Difference between Aquarium, Terrarium, Riparium, and Paludarium?”

Assassin snails (Clea Helena) are one of the most common snails in aquarium hobby these days. Their increasing popularity as aquarium pets should not be a surprise, though. They are often sold in...

Guppy grass (Najas guadalupensis) is a fast-growing aquatic plant species commonly known by the names - Common water nymph and Najas grass. It is popular in the aquarium hobby for its use in...