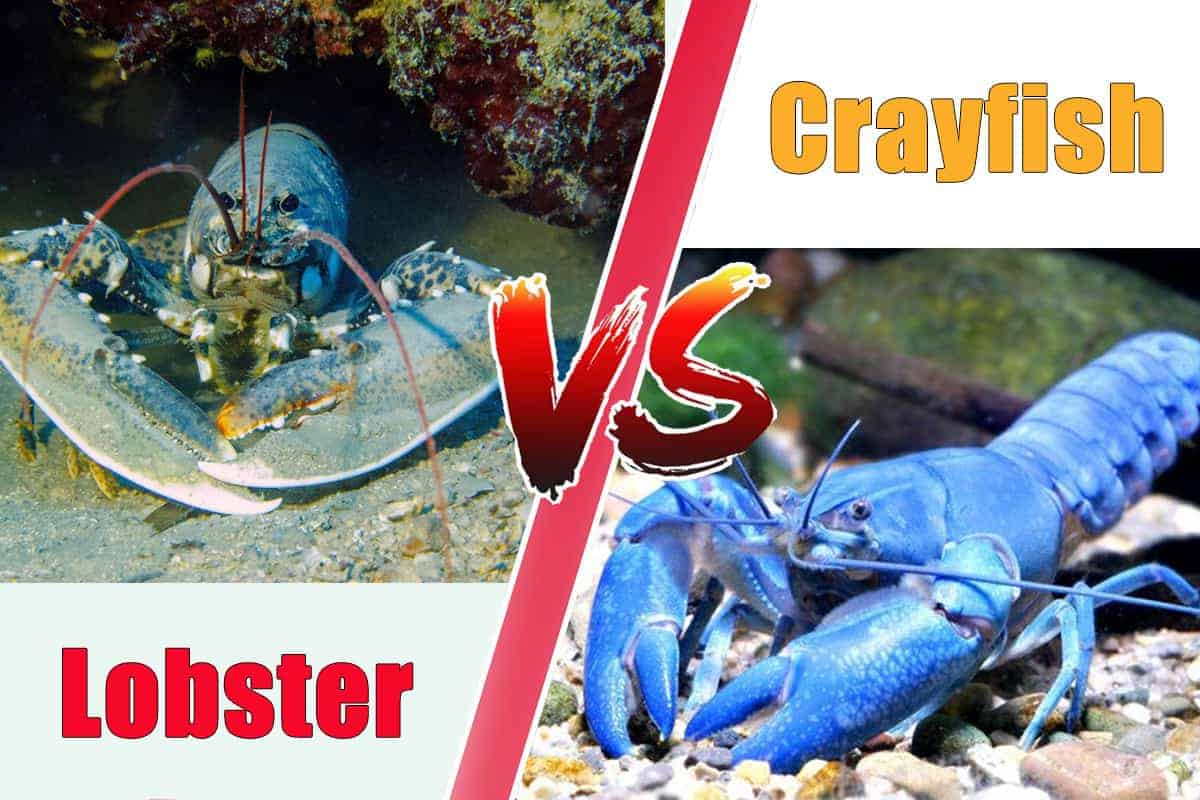 So what is the difference between a crayfish and a lobster? Well, crayfish and lobsters are both decapods and belong to the infraorder Astacidea, which means that they generally share similarities such as having hard skin (an exoskeleton) over a segmented body and spending their lives in water.

And while they may be similar in many ways, they do have one major difference – the type of water they require to live.

Crayfish are freshwater creatures and are not found in seawater due to the higher salt concentrations. Whereas lobsters occur in saltwater and are never found in freshwater.

So, let’s dive into their similarities and differences in detail.

It is believed that the name ‘Lobster’ came from the old English word ‘Lobystre’ that evolved from the Latin word ‘Locusta’.

The etymology of the term ‘Crayfish’ is not clear. Some sources say that the word ‘Cray’ refers to a hole or burrow. The name was derived from the old French ‘Escrevisse’ meaning “crevice” (because some crayfish species dig and live their entire lives in burrows) and was modified to by association with ‘fish.

Both crayfish and lobsters fall under the term “decapod”, which means that they have 10 legs. However, these two crustaceans fall under different Superfamilies and even Infraorders.

For example, even within one category, we have a huge diversity. If we look at lobsters, we will see that it consists of 2 main Infraorders: true lobsters (clawed lobsters) and their relatives which are also called lobsters (spiny lobsters, rock lobsters, and slipper lobsters).

Note: There are more than 250 lobster species in 55 genera such as Nephropidae (clawed lobsters), Palinuridae (spiny or rock lobsters), and Scyllaridae (slipper lobsters).

There are over 640 species of crayfish in the world and about 400 crayfish species live in waters in North America.

As it was already mentioned before, this is the main criteria that can be used to differentiate crayfish and lobsters.

Because these animals look very similar but live in different types of water crayfish are often called freshwater lobsters even in scientific literature.

When it comes to size, because of their stocky build and massive claws, lobsters tend to be significantly larger and heavier than crayfish.

Even if we compare the most popular species for mass production there will be a huge difference.

According to the study, the true lobsters (the Nephropidae) strongly resemble the freshwater crayfish in overall external morphology and are distinguished mainly by internal features.

The crayfish possess a fifth (last) thoracic segment that is movable, rather than entirely fused to the fourth segment as in the Nephropidae. Externally, the Nephropidae almost invariably lack a diaeresis on the telson; a diaeresis is present on some species in the Parastacidae and invariably present in crayfish.

True lobsters usually have a very long midgut and a short hindgut, which begins in the sixth abdominal segment. By comparison, this is the reverse of the situation found in freshwater crayfish, which have a very short midgut, with most of the length of the gut in the abdomen being hindgut.

True lobsters and crayfish also differ from the reef lobsters (family Enoplometopidae) in having claws on the first three pairs of legs (one large pair of claws and two pairs of walking legs are tipped with small claws), rather than just one.

Unlike true lobsters and crayfish, spiny (rocky) lobsters do not have large claws. In these species, the first

pair of legs are simply slightly fatter compared to the other four pairs.

Slipper lobsters look like flattened true lobsters but without claws. Their antennae, instead of being thin and long, are plate-like attachments in front of the eyes.

Unlike their marine cousins, freshwater crayfish do not have larval stages. They have direct development. It means that all the development occurs inside the egg. Hatchlings are generally tiny copies of adults and possess most of the normal adult appendages.

This type of reproduction directly correlates with the number of eggs females can carry. Crayfish can have a few dozen of eggs at best.

Unlike crayfish, Lobsters have larval stages and thus can produce thousands of eggs. Larvae stages may last months. It affects their survival rate which is extremely low. It is believed that out of 100.000 larvae, only 1 survives to adulthood.

Although some sources mention this criterion as well, in my opinion, it is not a very valid differentiating point between the two crustaceans.

Generally, lobsters and crayfish are omnivores to carnivores in their feeding habits. They eat just anything that comes in their way.

However, it is recorded that true lobsters have a strong preference for high-protein food. In their natural habitat, they like to eat crabs, clams, snails, mussels, starfish, shellfish, small fish and shellfish, and even other lobsters.

Crayfish are generally opportunistic feeders. They feed on all types of detritus, decaying animal, and plant matter. Even though crayfish will not hesitate to grasp the live prey with their strong claws (even occasionally cannibalize one another), they are not active predators. They are mostly scavengers.

Of course, it depends on the species but, generally, lobsters and crayfish have vastly different lifespans.

For example, if we compare the American lobster and Red claw crayfish once again, we will see that

The American lobster can live up to 100 years, which is more than 20 times the average lifespan of the

Red claw crayfish, which is around 5 years. In crayfish, the title of ‘longest-lived crayfish’ goes to the Tasmanian giant, which may live for up to 40 years!

We often confuse or simply use these words interchangeably, and think of them as the same thing.

Nonetheless, lobsters and crayfish are different in many ways: their anatomy, lifespan, size, feeding preferences, and natural habitat set them apart from one another.

Although crayfish resemble small lobsters, they are not closely related. They are separate families of animals.