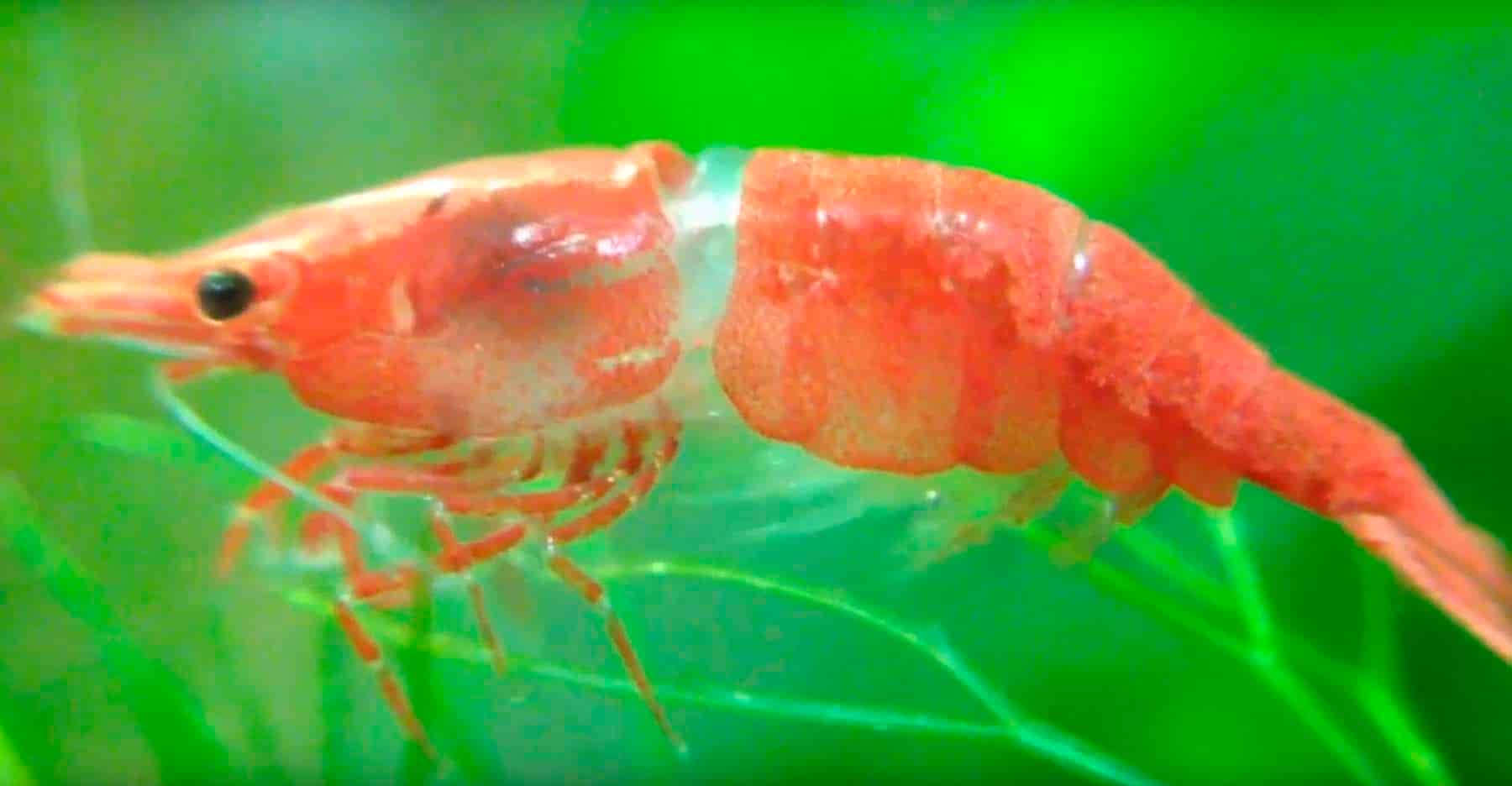 I bet that any shrimp breeder had a situation than one day the shrimp were active and acting normal and then – what is this ring on my shrimp? Unfortunately, “The White Ring of Death” means that your shrimp is in grave danger.

The White Ring of Death is the sign of molting issues. There are many possible reasons that can cause this problem. However, all of them can be reduced to water changes (water parameters kH, gH, pH, and TDS) and diet (protein and calcium).

Therefore, if you see “The White Ring of Death” it is mandatory to check and double-check everything in your aquarium. In most cases, it is a combination of all these factors. So, let’s take a look at each of them.

I would like to stress that you should not add anything to the water until you test pH, KH, GH, TDS. Anything affecting the water balance will affect molting.

What is The White Ring of Death? 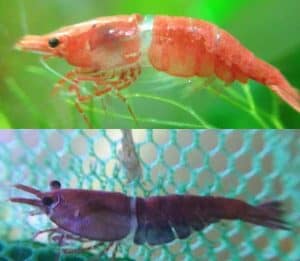 The White Ring of Death is the result of unsuccessful molting.

So, how it happens. During molting, the shrimp is filling its shell with water until the old exoskeleton bursts at the breaking point in the neck area (between the carapace and the first abdominal segment). At the same time, the shrimp U-bends (spring effect) and wriggles off the old shell.

This is where the problem comes.

Instead of breaking at one point in the neck area, the shell breaks across the full exoskeleton. The “ring” is exposed flesh of the shrimp.

As a result, there are two parts of the old exoskeleton, which do not have any connection.

Therefore, U-bends do not help and shrimp cannot pop out of the shell.

In some cases, it seems that shrimp can barely move their legs or mouth. That is because the old shell is not attached to the shrimp body as it used to.

Imagine that you have taken off the glove partially. You can move your fingers inside but it will not affect the glove. Eventually, it stresses the shrimp and it dies in one or two days.

Note: There is still a small chance that shrimp will be able to get out of the shell.

Well, I have seen so many times people saying that too much protein can cause the shrimp to grow too fast. As a result, it becomes really hard to shed off the shell and they can get “The White Ring of Death” or some other molting problems.

Frankly saying, some time ago I also thought this way.

However, now I have my serious doubts that protein can cause this kind of molting problems. What I mean is that the protein problem is exaggerated.

I need to mention that fast growth can cause deaths. However, it is a little bit different. The faster shrimp grows, the more often it molts. Because molting is a very dangerous procedure by itself, every time shrimp molt, they risk.

Therefore, mathematically there is a higher chance to fail. Nonetheless, it has nothing to do with “unusual overgrowth”.

Shrimp need a lot of Protein

The point is that I have read like several dozens of different studies about dwarf shrimp. To my surprise, almost in all cases, the researchers fed shrimp daily with food that contained 40-47% of crude protein.

Even more, some of these studies lasted months and they did not mention any problems with molting. On the contrary, right now it seems to me that, for biologists, it is a universal approach to feeding shrimp.

Why? Because it provides the best shrimp growth for their experiments without negative effects.

In addition, I would like to remind that exoskeleton consists of the three main components:

As we can see, protein plays a fundamental role in shrimp life. Therefore, when some shrimp breeders blame protein, well, I cannot accept it anymore unconditionally.

We do not know it for sure. It is just the guess. In order to become a problem, we need to give our shrimp mostly protein food and nothing else. Which is theoretically possible, but very unlikely in reality.

Shrimp need food diversity to get all microelements for a healthy life.

Thus, if nobody can pinpoint why they are dying, you need to change their diet. In this case, you can temporarily switch to vegetable-based foods (blanched kale, spinach, or zucchini) and feeding sparingly. However, keep in mind that shrimp can live without protein only for a short time.

One of the most successful shrimp breeders on YouTube had this situation. Guess what happened next? His colony of Crystal Red Shrimp turned cannibalistic!

They need protein and if you do not give it to them, they will solve the problem in their own way.

Some shrimp breeders believe that the reason for “The White Ring of Death” is water changes. It is a sign that you are doing too large or too many water changes.

Actually, I completely agree with that if water changes alter the parameters in a major way and cause a forced molt even if shrimp are not ready.

Therefore, we need to pay close attention to KH, GH, pH, and TDS. Remember that the most important thing for shrimp is consistency.

In one of the experiments, shrimp were exposed to reduced pH for 21 days. The results showed no differences in exoskeleton growth (percent increase in carapace length), but the calcium weight percent of their shell changed significantly in reduced pH conditions, resulting in a greater calcium and magnesium (Ca:Mg) ratio.

These results suggested that even short-term exposure to pH reduction can significantly affect exoskeleton mineralization. The metabolic investment in increased calcification may come at the expense of other physiological processes (such as reduced growth and increased mortality).

General Hardness is the measurement of the level of dissolved minerals in the water. It is predominantly represented by calcium and magnesium but also contains other mineral ions.

As I have written in another article “approximately 20 to 25% of the total body-calcium will be absorbed from the old shell”. The rest 75% of the needed calcium depends on nutrition and minerals in the water.

However, lots of people forget about Magnesium in this equation. Magnesium, actually, helps shrimp to absorb Calcium Carbonates. Ideally, we should have a ratio:

When hardness is too low shrimp will take a longer time after a molt for the exoskeleton to harden. While soft shrimp are vulnerable to mechanical damage. Also, shrimp exposed to soft water is more susceptible to other water quality conditions also. Very hard water can also be a problem.

You can read more about “Aquarium: Molting Process and Metabolism of the Dwarf Shrimp” right here.

Some aquatic brands use Calcium sulfate (CaSO4) in their products because (as they say) it helps to stabilize pH. However, there is a downside. Calcium sulfate buffers the water with huge amounts of calcium. Basically, you will have an overdose of calcium in your tanks.

Too much calcium causes the water to become hard, as reflected by the high gH reading. As a result, hard water will affect the shell of the shrimp, because it will become more rigid. Thus, it will take your shrimp lots of energy trying to molt. It stresses them a lot and can lead to death.

On the other hand, if you put them in a tank that has much softer water than what they are used to, their exoskeleton becomes too flex and malleable. As a result, it may not crack at all or the underlying layer of the shell will be too weak and shrimp will die during a molt or shortly after that.

In addition, if you need to save your shrimp like right now, lots of shrimp breeders do not recommend mineral stones because most of them do not degrade enough to make a difference.

This is a great product, which can help us to provide our shrimp with additional microelements. Lots of shrimp breeders recommend giving shrimp blanched vegetables, especially the kale if you see that some other shrimp have problems with molting.

Kale is very high in calcium, vitamins and additional nutrients. Within one or two days, the shrimp will get enough microelements for preventative measures.

I have made a comparison of the most popular vegetables.

The Egg Shells, Calcium and Shrimp

Shrimp needed calcium to molt properly. Therefore, if you do not have any calcium supplements around (for example like highly recommended cuttlebones) there is always a way out!

The Egg Shells will give your shrimp enough calcium. Bake the eggshells in the oven for a few minutes. It will kill any bacteria on the shell and it will help to turn it into a fine powder. Then, take the eggshells and crush it to powder (use a mortar and pestle).

Do not add too much, just a pinch will be enough.

It is very sad to see your shrimp suffering. Sometimes people decide to step in and help the shrimp. The logic is simple. If certain death awaits the shrimp anyways, it might be worth it to try.

I would like to warn everybody. Shrimp have a very delicate body. Any operations with tweezers require almost surgical precision. In all other cases, shrimp have better chances of survival without your help.

Frankly saying, I have never heard that this kind of “assistance” ended well. In a best-case scenario, people simply break the shrimp’s legs or crash they carapace, increasing shrimp suffering even more.

Hope for the best and let nature take its course.

18 thoughts on “Dwarf shrimp and Molting problems. The White Ring of Death”