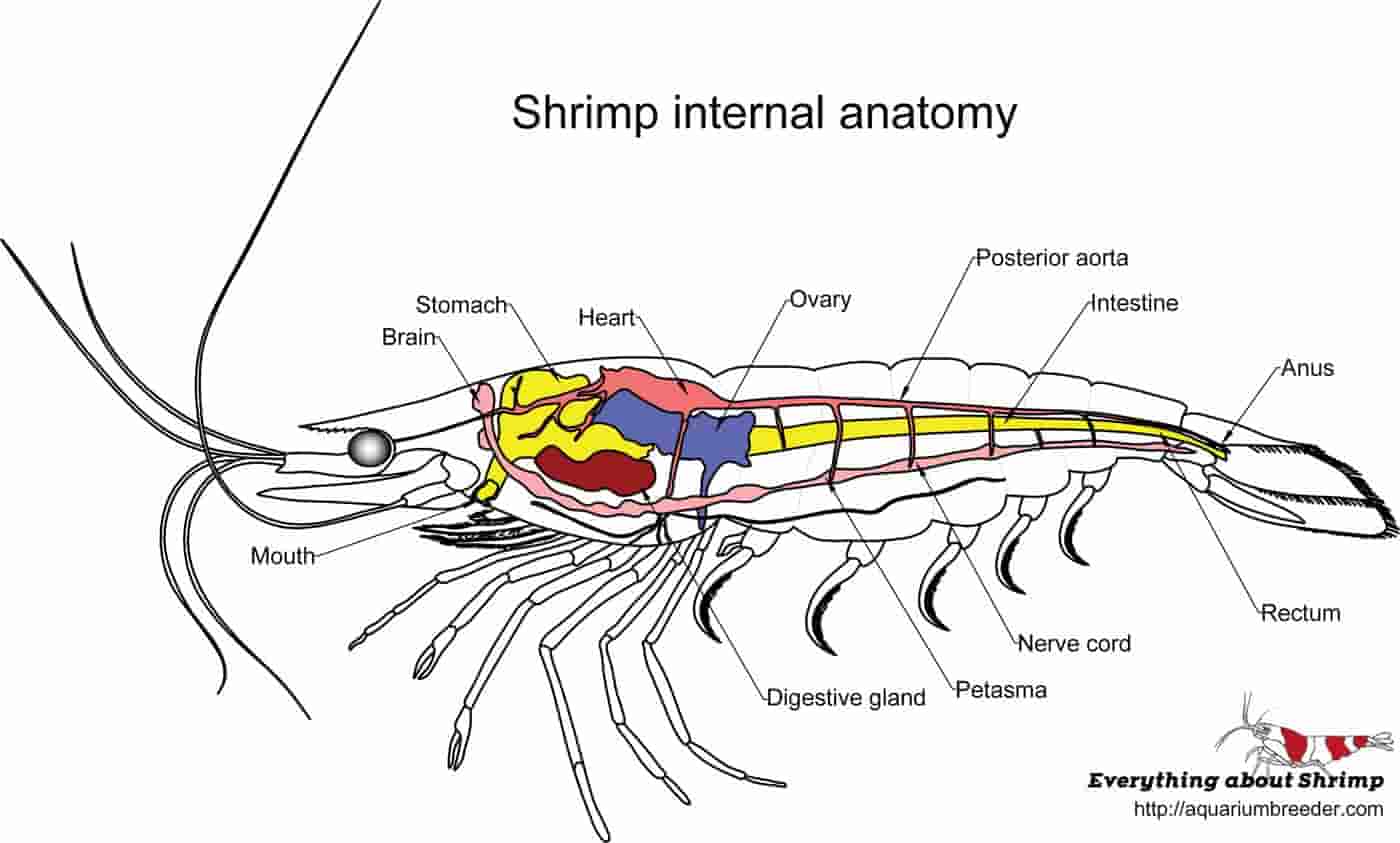 In this article, you will know more about the internal structure of your shrimp. Surprisingly, I have not found many articles about this matter on the internet. Well, of course, there are some very deep scientific studies about ultrastructure of the alimentary tract in the freshwater shrimp; changes in cardiac performance during hypoxic exposure in the grass shrimp;  insights in the male anatomy of the red cherry shrimp and etc. However, they are too complex and ordinary shrimp hobbyists do not need that kind of details. Therefore, I will try to make it as simple as it is possible to fill this gap.

The majority of the internal organs are located in the Cephalothorax of the shrimp (the head and chest area). While in the abdomen we can find mostly strong muscles, and the part of the intestine system.

The Circulatory System of Dwarf Shrimp

The circulatory system of shrimp is open. It means that the entire abdominal cavity of the animal is filled with blood. The heart contracts to send the oxygenated blood to the different parts of the body through eight arter­ies.

Note: Behind the stomach lies the elongated heart. It sits on top of the digestive gland. The heart is often mistaken by many for the brain.

The blood leaves the arteries and flows around in the body cavity supplying internal organs with oxygen and nutrients. After that, when the heart relaxes, blood is drawn back toward the heart through open-ended pores to start the cycle again. These pores basically replace the capillary (veins) network in a shrimp body.

Another interesting fact is that the blood of the shrimp has a light blue color. If there is not enough oxygen in it becomes almost colorless or grey. This is because shrimp do not have hemoglobin. Actually, their “Blood,” is a combination of blood and an interstitial fluid called “hemolymph”. Their blood can coagulate very rapidly.

You can read more about “How Copper Affects Dwarf Shrimp” right here.

The Respiratory System of Dwarf Shrimp 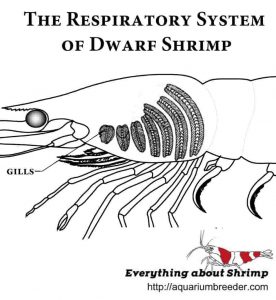 Dwarf shrimp breaths with the help of gills. There are several different morphological types of the gills: dendrobranchie, tricobranchie and fillobranchie. For example, the Caridina and Neocaridina have fillobranchie.

These gills have a double set of branches in the shape of a plate or leaf. They are enclosed within a special gill-chamber on each side of the cephalothorax. The 14 pairs of gills are protected directly above the base of the walking legs (pereiopods) and are not visible in the gill-chamber (unless it is a Ghost shrimp or any other transparent type of the shrimp).

The Digestive System of Dwarf Shrimp

The digestive system of shrimp can be divided into two main parts:

The stomach is a clear sac positioned behind the eyes and below the heart.

The digestive system works in the following way.  Dwarf shrimp use maxillipeds to crush and munch food outside the body. When, through the passage in the mouth, the food goes to the stomach, which is divided into two chambers. The digestive gland releases enzymes into the stomach that help in digesting the food. Next, the food is filtered and divided into solid and fine components. The non-digestible remains enter within the rectum and are temporarily stored there for some time. Eventually, they are excreted through the anus opening.

The Nervous System of Dwarf Shrimp

There is a popular belief that shrimp do not feel the pain. Well, actually, it is a matter of scientific debate. Although the definitions of pain can vary, it always includes the ability of the nervous system to detect and reflexively react to harmful stimulation by avoiding it. Shrimp have this ability. Therefore, they do feel pain to some degree.

The nervous system of shrimp is multifunctional.

The shrimp brain is very small and consists of only a few nerve cell clusters (cerebral ganglion or ganglia). It is located on the back, or dorsal, side of the shrimp’s head (right behind and between the eyes). A ganglion is clusters of nerves while the brain is the control center. This ganglion consists of three fused nerve nodes:

A chain of ganglia extends along the belly of the shrimp and runs to the rear end of the body (to the telson).

You can also read the article “Do Crabs, Crayfish or Shrimp Feel Pain?”.

The Reproductive System of Dwarf Shrimp

In male shrimp, testes produce spermatids that are transported to and accumulate in the vas deferens. The testes (paired and soft organs) are located in the neck area beneath the heart. Each of them includes numerous tiny tubes, called seminiferous tubules. Each tubule has an inner lining of a single layer of epithelial cell which trans­forms into spermatozoa.

In female sexual mature shrimp, there are the paired ovaries, in which the eggs are produced. It is easy to see them beneath the heart if the shrimp is transparent. The paired ovaries aquarists usually call a “Saddle”. This is the only indicator of shrimp gender, which can guarantee the difference between males and females. The matured eggs remain near the margin and the immature eggs occupy the center.

Sperm cells have the shape of an umbrella. The eggs are round and yolk-filled. When the eggs are ripe, the shrimp female waits until she has molted. The mating takes place after molting. This is the only time when female is soft enough to squeeze the eggs unscathed.

Insemination is external. It means that the union of reproductive cells occurs outside the body. The male shrimp leaves sperm into the genital opening of female shrimp using its appendix masculine.

Afterward, the female starts moving the eggs (squeezing) from the “saddle” to the brood pouch. At that moment the eggs go through the sperm and become fertilized (berried). The brood pouch itself is formed by pleopods of the female. They hold the eggs until hatching day.

You can read more about “Breeding and Life Cycle of Red Cherry shrimp” right here.