One of the major problems in breeding Neocaridina davidi shrimp in Taiwanese aquaculture ponds are Epibionts such as Cladogonium ogishimae. Unfortunately, in most cases, this parasitic alga on freshwater shrimp are usually confused with Ellobiopsidae. However, the good thing is that possible treatment remains the same.

The parasite can be found on the body of the dwarf shrimp as “green fungus”. These organisms affect shrimp wellbeing by causing distress, which leads directly to shrimp weakness, loss of color, and eventually death.

Lack of effective treatment due to the relatively small knowledge of parasites found in freshwater shrimp farms may result in escalating of the problem in the future. Additionally, the trade of dwarf shrimp poses a significant risk for the unintentional introduction, establishment, and spread of incidental “hitchhiking” parasites.

Microscopic analyses indicate the presence of several freshwater shrimp epibionts. Some of them show a parasitic lifestyle, for example, as Cladogonium ogishimae. Unlike Scutariella japonica and Vorticella, which usually root at the rostrum of the shrimp, Cladogonium ogishimae occupies mostly the bottom of the shrimp. Especially on the pleopods responsible for incubating shrimp’s eggs.

Cladogonium ogishimae has a filamentous body as small as 1-2 mm. It stands upright and has branches. All of the vegetative cells are colorless, but the zoosporangia and the zoospores are furnished with many green chloroplasts.

Cladogonium ogishimae proliferates through these zoospores, which are mobile and can infect the new shrimp with the ectoparasite. If the spore containers are visible, the infection is already well advanced.

I do not want to be a myth-buster but I have my serious doubt that most of the shrimp breeders are correct when it comes to identifying this parasite.

I have read like dozen different studies about Ellobiopsidae (You can see them at the end of the article. Most of them you can find online for free.), and I am going to give you a short review about this parasite and compare it with Cladogonium ogishimae. 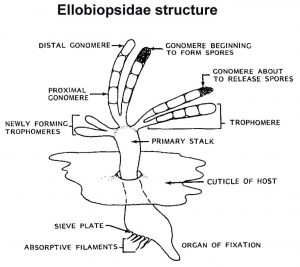 It is multinucleate parasites of aquatic crustaceans that possess a nutrient absorbing “root” inside the host and reproductive structures that protrude through the carapace. Ellobiopsidae have variously been affiliated with fungi, “colorless algae”, and dinoflagellates, although no morphological character has been identified that definitively allies them with any particular lineage.

Ellobiopsidae appears as “cysts” or “tufts” of tissue on the mouthparts, antennae, or carapace of infected crustaceans, though closer scrutiny reveals that the parasites penetrate into the interior of the hosts to varying extents.

By infiltrating the host’s nervous or gonadal tissues, Ellobiopsidae infections can cause host sterility and/or alteration in behavior and endocrine function. Furthermore, the presence of Ellobiopsidae may suppress molting through endocrine control of the host. It is more likely that increased mortality resulting from infection, starvation, and inability to molt. 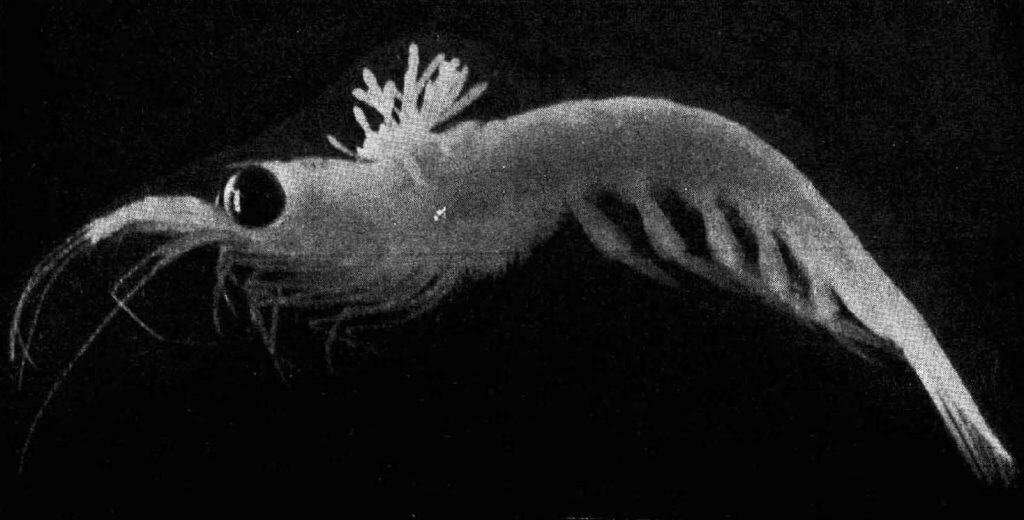 According to the biologists, this is without a doubt, some of the strangest looking organisms. It is not possible to sort it into the known plant, animal or fungal groups. The parasite is like “partially everything”. Presumably, it spreads by spores.

Their phylogenetic affinities and taxonomy are largely unknown.
Whether reproduction is sexual or asexual is unknown.
The length of “life” of the internal portion of the parasite and its seasonal presence is unknown.

As we can see scientists do not know almost anything about Ellobiopsidae. Therefore, it can be problematic to compare different parasites. (Especially, when the biologists do not know much about Cladogonium ogishimae as well :D). However, several things supposedly can make the whole difference for us.

I am not a biologist and I do not want to prove or claim anything here. This is just my subjective comparison.

What I think is that a long time ago some aquarists tried to find the scientific name for this parasite. During their research, they came across Ellobiopsidae, which has more or less similar symptoms. After that people simply started repeating this name without analyzing it anymore. Actually, it is hard to blame anybody, because we hardly have any data about these parasites at all.

Personally, I believe that we have a huge misunderstanding and confusion. In reality, we deal with Cladogonium ogishimae because it:

Once again, this is my opinion based on studies of freshwater shrimp in Japan. However, because these two parasites are not studied well, I will still refer to both of them in this article. They can have a different structure but the attempts of treatments are the same in each case. 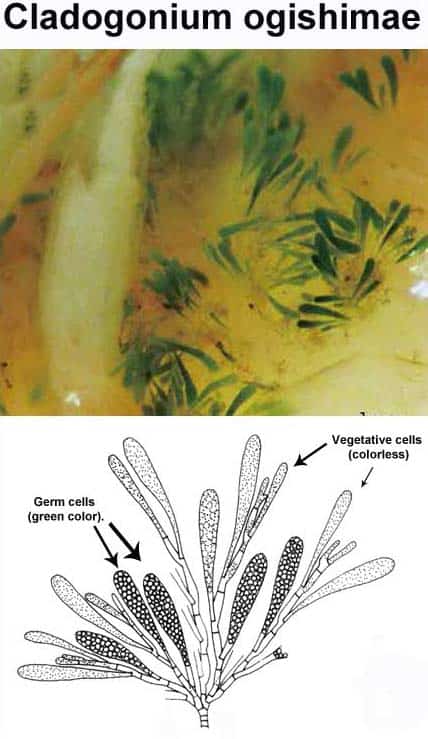 Unfortunately, it is very difficult to identify this parasite at early stages due to the lack of color. When it is small, it is almost colorless. The fact that it also occupies the bottom of the shrimp (pleopods) makes this even harder to recognize.

That is why if you see the yellowish-green spores of the shrimp algae under the abdomen, it means that the shrimp have been infected for a long time.

It grows at various stages and branches actively. Most of the branches consist of one cell. One “root” can have more than 15 cells. Some of these cells become remarkably long while being colorless. There are two types of cells on the root:

The infestation is not visible until very late. When the algae start parasitizing in the muscle tissue of the shrimp, the germ cells begin to form their greenish spore container. Typically, “Green fungus” sits between the pleopods, where the shell of the shrimp is thinner and thus more consistent for the ectoparasite. Only very rarely one can discover the typical branched appendages also at other parts of the body of the shrimp.

The short answer is definitely yes! The parasite inhibits their movement activities by infiltrating into the muscles of the abdominal part of the shrimp. As a result, shrimp cannot get enough nutrition. At some point, shrimp can barely move. With time the affected shrimp become weaker and eventually dye.  In addition, it becomes impossible to mate for the shrimp. The spores “Fungus” prevents oviposition in the female shrimp. All in all, if left untreated, the parasite may progressively affect the entire population of the shrimp colony.

According to researches, it infects Neocaridina, Caridina, Paratya, and Macrobrachium. However, warmer temperature increases its activity, which makes Neocaridina the most common target in shrimp farms.

Note: According to shrimp breeders observations Ellobiopsidae infects only Neocaridinas. Well, it is really hard to say. Maybe the parasite does show some “preferences”. Maybe it is just a coincidence or the effect of the temperature, which makes the difference. In this case, it might show us once again, that we are dealing with Cladogonium ogishimae.

The Ways of Infestation in Shrimp Tank

Supposedly poor water conditions and dirt are the main reasons for infestation.

Cladogonium ogishimae is a secondary parasite that strikes when the shrimp’s immune system is weakened, whether due to stressful transportation, improper habituation, inappropriate water levels, high bacterial load, improper feeding, and other stressors.

Only a few years ago it was absolutely not possible to save the infected shrimp. However, thanks to shrimp breeders who attempt to resolve this issue we now have some possibly successful treatments.

I would like to start off by saying that keeping shrimp in the dark will not work. The thing is that I have already mentioned that this parasitic alga does not contain chlorophyll (Chlorophyll is essential in photosynthesis, allowing plants to absorb energy from light and turn them green). However, it gets almost everything from the shrimp (feeds parasitically).

This is one of the most popular methods to treat algae in fish aquariums. Copper binds to algae, damages its cells, causing them to leak and die. The only problem of the copper is that it is extremely dangerous to the shrimp. Even more, too much copper is toxic to plants as well, because it prevents photosynthesis.

According to aquariumwiki the dangerous level of copper for:

It seems like that shrimp will not survive the treatment.

You can read more about “How Copper Affects Dwarf Shrimp” right here.

Another way to treat these parasites was proposed by Chaz Hing (Chaz Hing has a bachelors degree in chemistry from the University of Delaware. He is the passionate shrimp breeder and founder of ElevateShrimp.com).

Note: In his study, he is referring to this parasite as Ellobiopsidae. At the same time, he also says that “I could only find information on the marine family of ellobiopsid”.

It looks like malachite green is quite effective against Ellobiopsidae or (and) Cladogonium ogishimae. Therefore, if you cannot get Kordon Rid Ich Plus, you can try your chances with some other variants. 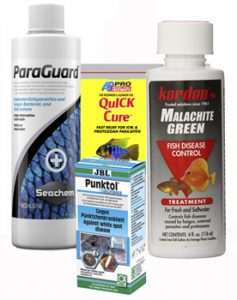 In my article about “Shrimp Vorticella Parasite. Treatment” I also refer to the list of well-known medicines, which contains malachite green, such as:

According to Marks Shrimp Tanks it can cure “the green fungus”. This is a very promising remedy; just make sure that the dosage is correct. Check and double-check your calculations!

The medicine is very strong and if you do this wrong there is a high risk that you will kill all your shrimp. I have found that the safe level is 14.3 ml H2O2/L, approximately 50 % of the largest applied dose that caused no mortality (NOAEC), which was 29 lL H2O2/L. (“Short communication: Acute toxicity of hydrogen peroxide in juvenile white shrimp Litopenaeus vannamei reared in biofloc technology systems” Plinio S. Furtado, Fabiane P. Serra, Luis H. Poersch, Wilson Wasielesky Jr. Aquacult Int (2014) Received: 6 March 2013)

Hydrogen peroxide (link to check the price on Amazon).

On the internet, I came across an interesting post. One of the shrimp breeders said that he cured the shrimp with the almond leaves and a few alder cones.

It is really hard to say, but this method is worth a try. It is a well-known fact that Indian Almond Leaves have antifungal properties. Maybe the high concentration can really help in this case.

It is best to set up a quarantine tank for the infected shrimp as to not harm any other inhabitants within your aquarium.

Quarantine is very important when you are buying new shrimp. You need to be sure that they do not have anything so the parasite will not spread and contaminate the rest colony. Even if they appear healthy, it is not the case with imported shrimp a lot of the time.

Get a magnifying glass to close examination of the shrimp. Also, if you are buying a homebred shrimp, do not automatically assume that they are disease-free. Unfortunately, a lot of people buy imported shrimp and resell them as homebred.

The quarantine tank should not have any substrate to prevent re-infection with spores.

A filter can be counterproductive because spores could accumulate in the filter material. Because of that, you will need to do 30-50% water changes every day.

Tip: The substrate in the main tank should be thoroughly vacuumed several times as well. You need to do that in order to eliminate as many of the spores as possible before other shrimp can get the parasite.

For more information, read the article “How To Setup an Easy Quarantine Tank”.

Ellobiopsidae or (and) Cladogonium ogishimae are very dangerous parasites. There are not enough researches about them. Therefore, we do not know how to treat them efficiently.

There are several methods, which presumably can remove the parasite. However, nobody can guarantee the result.

Rotala Macrandra is a famous and attractive aquatic stem plant that drastically complements the aesthetics and outlay of freshwater aquaria. It is very popular among aquarists and in the...