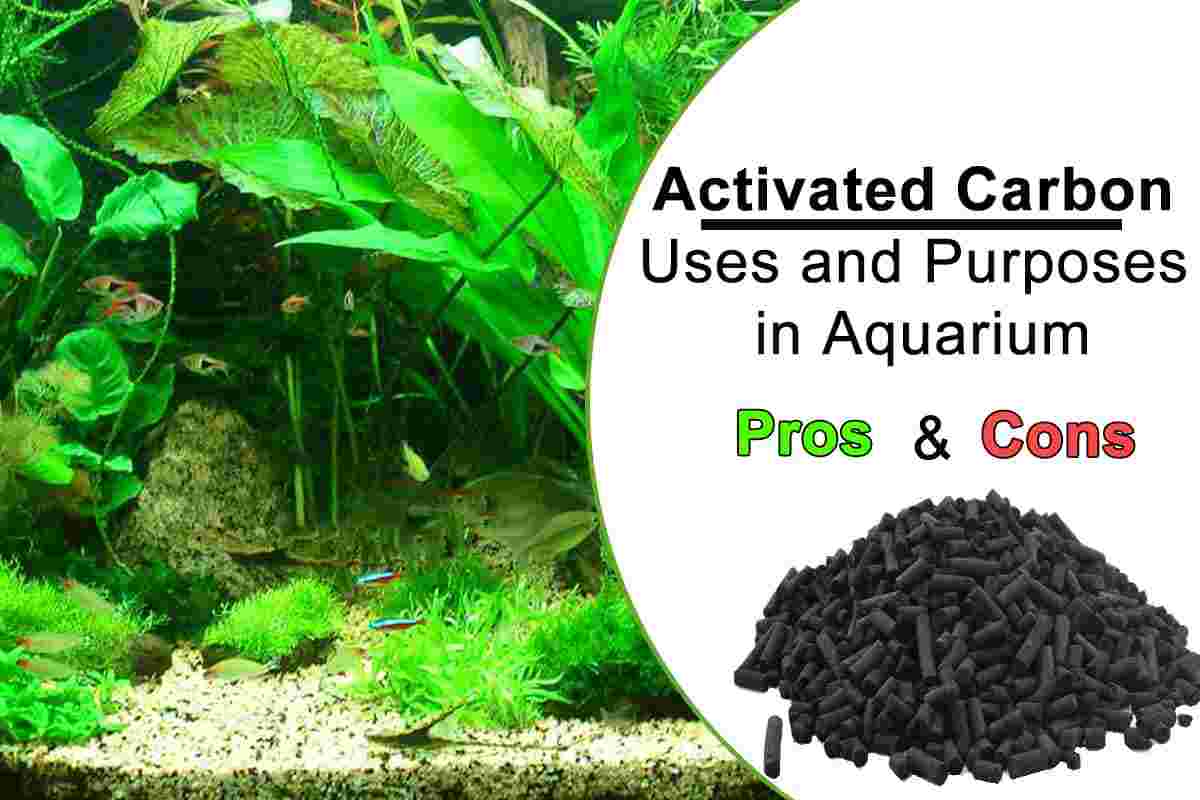 Aquarium activated carbon is one of the most marketed and utilized filtration products in the fishkeeping hobby.

While a host of aquarists consider it as a must-have filter media and attest to its efficacy at removing odors, colors, and pollutants from the aquarium water, others view it as an optional item which should not even be used if one maintains pristine water quality and good tank hygiene.

Despite the contradictory views/opinions of hobbyists concerning the usage of activated carbon in aquaria, I think that in some cases, aquarium activated carbon can be a great addition to a tank and excels at eliminating contaminants and dissolved substances.

In this article, I will discuss the nature of activated carbon, pros, and cons, how it works, guidelines, and precautions.

What is Activated Carbon?

Activated carbon is an efficient filtration tool made from carbonaceous material that has undergone heating at extremely high temperatures to create hundreds of tiny pores, thus increasing the surface area.

The process of increasing the surface area and pore size of carbon is known as activation, and this multitude of tiny pores and huge surface area enables the filter media to adsorb contaminants and pollutants present in air and water.

Note: The more surface area present, the more your activated carbon can interact with water, and the more dissolved chemicals it can eliminate successfully.

Aquarium activated carbon is commercially available in a variety of forms, and this is as a result of the diverse methods that were utilized in creating them, and each of them is manufactured ideally for a peculiar role.

Aquarium activated carbon comes in bags. It can also be found as a black sponge, cartridge, or part of a filter media.

However, it’s ideal to use activated carbon made from bituminous coal in the aquarium, it has the best pore structure for trapping contaminants from the water.

What Does Activated Carbon Do?

Adsorption is the adhesion of molecules from a gas, liquid, or dissolved solid to a surface, it can be on the outer or inner surface of the material.

Through the pores, the activated carbon media is able to trap harmful substances such as contaminants from tap water (chlorine and chloramine), tannins from driftwood which alters the normal color of water, and phenols from the metabolic waste of fish, snails, shrimp, crabs, frogs, etc. decomposing plant matter and uneaten food which causes odors.

Though it has an excellent reputation for keeping the water clean by eliminating traces of contaminants, keep in mind that activated carbon cannot get rid of toxins like ammonia, nitrites, and nitrates which are harmful to aquatic life.

In these cases, it is recommended to use either RO/DI systems to produce high-purity water or at least a good water conditioner. Never forget to treat the tap water before adding it to the aquarium!

Important: Do not completely rely on water conditioners! Even though they can still help by detoxifying some metals at concentrations normally found in tap water, they do not remove them. In addition, their effect can be very limited depending on the concentration of the toxins.

Regular water changes and other cleaning techniques should be deployed for removing high levels of toxic inorganic compounds like ammonia and nitrates.

It is worth mentioning that activated carbon will react with medications used for fish and/or shrimp disease treatment.

Therefore, you should first remove carbon from the aquarium filter before treating your sick pets with such medications. Obviously, you should not use activated carbon in a quarantine tank as well if you are planning to use some treatment there.

Then, as soon as you are through with the treatment, the carbon media can be returned to the filter chamber to remove any residual medication from the tank water.

How to Use Activated Carbon in Fish or Shrimp Tanks

Do note that activated carbon should be a polishing agent at the end of the filtration process and not the reverse.

Therefore, it should be placed after the mechanical filtration media to remain activated for a longer time, putting it before will make it clog faster, thus hampering on its ability to function optimally.

For this purpose, a media or mesh bag is needed, next, fill the media bag with a sufficient quantity of activated carbon and place it in your filter.

Note: Ensure to always rinse the carbon media before adding it to the filter to remove dust.

Changing the Activated Carbon in the Tank

Through adsorption, activated carbon is capable of trapping water pollutants, but what happens when this filter media becomes deactivated and unable to remove contaminants?

It’s up to the aquarium owner to ensure regular replacement of the activated carbon media at least every 3-4 weeks (once a month) by removing the exhausted carbon and refilling the media bag.

A delay in replacing the carbon after a month may not harm the tank but it will lose its ability to bind toxins from the aquarium water.

Note: Though, it is still up for debate whether the carbon media will leach adsorbed contaminants back into the aquarium when it is clogged and cannot trap toxins any longer. Personally, I don’t think so. It is more of the natural process of building up toxins in the tank that aquarists may confuse with leaching back.

In a situation where you notice discoloration of the tank water or an unusual odor, it’s advisable to change the activated carbon immediately! After that, you need to carry out partial water changes till the condition improves.

Keep in mind that you cannot recharge activated carbon once it becomes exhausted, regardless of the tales you may have heard about the reactivation of carbon by heating it in an oven, I want to let you know that it is a futile task.

The required heat (temperature) for recharging exhausted carbon cannot be attained in a standard kitchen oven. It is something about 600C (1100F) at the first stage and 900C (1650F) at the second stage. In addition, there should not be air access.

So, don’t even bother trying to recharge it. Don’t bother to rinse it either, it will not help.

The exhausted carbon should be replaced outrightly.

Phosphates and the Activated Carbon

Another thing to note is that some types of activated carbon may contain phosphates, and it is highly likely for the phosphate to leach into the tank water through this means.

Phosphates play a basic role in the mechanisms of photosynthesis. It is also responsible for the storage of energy in the aquatic plants.

However, some types of activated carbon may exceed the limits in an aquarium which in turn promotes the growth of algae. Even more, higher levels of phosphates may also affect the health of your fish or shrimp in the tank.

So, it’s best to stay clear of inferior brands that offer low-quality carbon with high ash content. They are worst at leaching phosphate into the tank water, also, some brands will indicate that their carbon products are phosphate-free, so be on the lookout for this. This mistake can have very bad results!

Moreover, if your tank tests for high phosphate levels, then you should change the activated carbon brand or remove it entirely until the issue is resolved.

Note: Phosphates are normally found in nature in small concentrations such as 0.01 mg/l. Therefore, its level should be in the 0.05 -1.5mg/l range in your tank.

You can also read my article “How to Spot Nutrient Deficiencies in Aquatic Plants”.

Activated carbon should not be used inappropriately to prevent problems in the tank.

It’s best to adhere to a few precautions while using this efficient aquarium tool, these are outlined below:

Also, there is a likelihood of an ammonia spike happening after the addition of the new activated carbon.
However, once again, this can be averted by making sure that enough filter media such as sponges, beads, ceramic beads, or rings are available in the filter to act as the main media for the attachment of beneficial bacteria.

Diverse benefits can be derived from the use of activated carbon.

It helps to remove odors and colors in a freshwater aquarium, it can also function as a dechlorinator— removing chlorine, chloramine, and heavy metals from the tank water, in addition to removal of tannins resulting from wood, and residual medication after a fish disease treatment.

However, there are also downsides that cannot be neglected.

The decision of whether to or not to use aquarium activated carbon is solely yours to make, if you engage in good maintenance habits then there wouldn’t be a need for this tool. Fish or shrimp only tank (without plants) may be another good example for this product.

So, depending on your water conditions, stocking levels and bioload, the addition of a activated carbon will always help in keeping the aquarium clean and healthy but bear in mind that it is not a substitute for routine partial water changes and general maintenance.