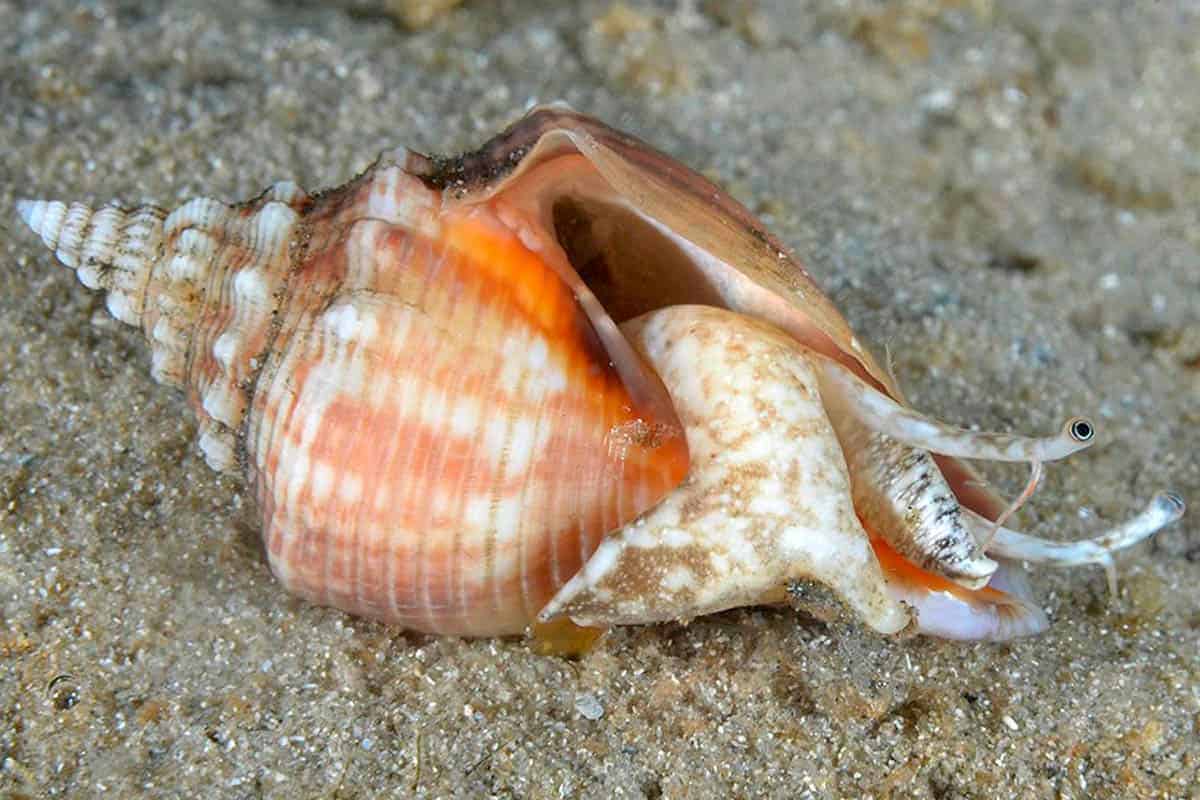 In general, Fighting conch snails are peaceful, relatively cheap, and very easy to care for. They are an excellent addition to your marine tank. Keep reading for everything you need to know about them!

Different types of conch snails can be found throughout the world in tropical climates. They are usually found in shallow waters and often frequent reefs. They often go deeper in search of food as they age, returning to the shallows only to lay eggs.

Description of the Conch Snails 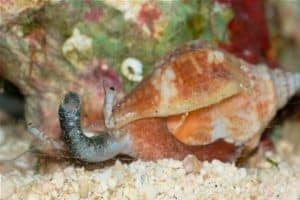 Conch snails are easily one of the most recognizable snails in the ocean and on the beach. They are iconic for having a shell that will “sound like the ocean” when raised to one’s ear. Their shells are slightly conical, with a right-facing spiral pattern. The edge of their shells curls outward instead of folding inward, making them somewhat more vulnerable to predators – such as hermit crabs and certain fish – than other snails. Usually, their shells are striped as well.

Fighting Conch snails can see motion and movement far better than regular snails. They have well-developed eyes that will watch the action around them. When you walk up to the tank, you will see them watching your every move. So, if you put your hand in front of the snail, it will immediately react by pulling back into its shell and look directly at the danger. These eyes extend from under the lip of the shell and the left eye usually expends from a notch in the side of the shell.

They also have a very long proboscis mouth that kind of resembles an elephant’s trunk.

According to some studies, Strombus genus can live up to 10 years. Unfortunately, when kept in aquariums,  these conch snails do not live that long.

Aquarium Types of the Conch Snails 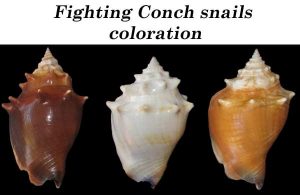 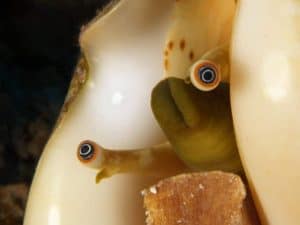 Fighting Conch snails can reach 7 – 10 cm (3 to 4 inches) in length. Their shell has a dark reddish-brown, often mottled with orange-brown or having zigzag bars of color on the shiny parietal wall. Conch snails have two eye-stalks that protrude from under their shells as well as a long snout that is actually their mouth.

The Hawkwing Conch snails (Strombus raninus) are Caribbean snails with a thick, heavy shell. The color is mostly brownish, with several disperse white spots. At the same time, both inner and outer lips are cream or white. In captivity, they can grow up to 10 cm (4 inches). However, it will take many years for that.

Tiger Sand Conchs (Strombus spp) are beige with darker brown bands. Their shell is cone-shaped with a small crown.

The Behavior of the Fighting Conch Snails

Despite the aggressive name, Fighting Conch snails are algae and detritus eaters and are absolutely harmless to other animals.

They move using their powerful foot to propel themselves. Fighting Conch snails have an interesting way to defend themselves. When not buried in the substrate or when threatened, they can appear to hop over the bottom. Also, when they are upside down, these snails “catapult” to right themselves.

They are pretty active creatures. You can see them during the day just moving around and eating.

Sexing of the Conch Snails

Although Fighting Conch snails are omnivorous, they feed mostly on algae (that other snails would never touch), bacteria, and detritus in tank environments. They will happily eat hair algae, green algae, and filamentous algae found in a tank. They will consume bacteria in the substrate as well as cyanobacteria and diatom blooms.

When the snail eats, it extends its long snout that has radula. The radula is a type of toothed tongue, which makes it possible for the snail to scrape off algae from the surfaces in the tank.

Important: They need a lot of food, so be prepared to supplement with other food. While they will also eat food that is uneaten by their tank mates, Conch snails can also be fed herbivore pellets, (algae pellets, dried algae, etc.) if you do not have enough algae growth.

Despite their omnivorous nature, Fighting Conch snails are considered reef safe. When looking for food, they will not try to snack on corals. However, they do can knock over some freestanding corals that are on the bottom.

Their hardy nature makes Fighting Conch snails easy to care for, so both veterans and beginners can enjoy them.

As with any aquarium, you always need to make sure that the tank is set up correctly, and that the water is properly cycled. This ensures that you have the appropriate bacteria, which will convert harmful compounds into less harmful ones.

A small Fighting Conch snail would be an excellent addition to the clean-up crew of a 20 gallon (~90 liters) tank. Especially if the tank is well established, there would likely be enough algae and bacteria already existing and being produced in the substrate to support the Conch snail as it grew to full size.

Larger Conch snails would need a larger tank. Basically, the more space you can provide the better.

Fighting Conch snails should be kept in marine aquariums with sand or silt substrates that they will be able to delve into. They may disappear entirely for days as they eat through bacteria, algae, and microflora found in the substrate.

Ideally, your substrate should be deep enough to burrow down into the ground and disappear.

The salinity of a tank containing a Fighting Conch snail should be kept between 1.023-1.026 specific gravity as measured on a hydrometer. The pH should be kept between 8.1 – 8.4. They need hard water with lots of calcium to maintain and grow a healthy shell. This approximates the salinity and pH of the ocean at which Conch snails are usually found.

Note: Low levels of pH can start to dissolve the calcium carbonate shells of the snails. Therefore, if you see cracked, thin, or pitted shells, it can be a sign of low pH as well as low levels of calcium.

Additional measurements should be taken at regular intervals to ensure that proper parameters are maintained for a reef tank appropriate to Conch snails. Calcium should be kept between 420 – 440 ppm. Alkalinity, which is a measurement of carbonate hardness, should be regulated to a range of 8 – 12 dKH. Magnesium levels are best between 1280 – 1350 ppm. Phosphates, ammonia, nitrites, and nitrates should all be at or approaching zero before any livestock is added to a marine tank. Copper can be lethal to Fighting Conch snails, so be careful with that.

As Fighting Conch snails are from shallow waters in tropical and subtropical environments. Their ideal environment is 75 – 84 °F (24 – 29 °C). Do consider adding a heater if the temperature is prone to fluctuating, as these snails are hardy but do need stable conditions.

Biologists noted a “follow-touch” courtship sequence between males and females. The males approach females with their proboliscis to start an interaction. The female would leap away from the male, rejecting copulation. The males would follow the female before the copulation was successful. Fighting Conch’s copulation lasts from 5 minutes to 2 hours.

Interesting fact: The males can follow a chemical trail laid down in the sand by the females, some of which may be as far away as 5 m.
Note: There is no trend in mating based on the size of the mating female and male.

The Fighting Conch males also demonstrate protective (guarding) courting behaviors. These included a male “sparring” or fighting (using their proboscis) between two or three males over a female.

In the wild, Fighting Conch snails breed in shallow waters in seagrass beds or sandy habitats. The reproduction season is typically during the summer months.

Once a male copulates with a female, egg laying will occur, although this process may follow copulation by several weeks. Multiple males may fertilize individual egg masses from a single female.

Note: Researchers suggested that the egg laying females release a pheromone that may stimulate them to lay their eggs faster, so as to be able to spawn more often.
Interesting fact:  During the egg laying process, males may attempt to copulate with the females. The Females Strombidae have a reproductive system that can spawn and copulate (hold sperm) at the same time.

This Conch snail species lay eggs in long sticky streams, which can be found on tank glass or rocks. These eggs are tiny, often seeming as small as a grain of sand. Crescent-shaped egg mass contains up to 180 000 eggs.

Metamorphosis takes place in 18 – 24 days. During this time, there is a high mortality.

If you get interested in breeding Fighting Conch snails, I would highly recommend reading the research about it (links below). According to them, hatched larvae of Raninus, Alatus, and Costatus were cultured at 20-50 veligers/L in 2 to 3 5-L containers using established techniques. The larvae water was 5 μm filtered, UV-treated, and changed daily. The cultures were not aerated, and the temperature was controlled by placing the containers in a water bath.

Larvae must receive the right amount of nutrition during this stage of development can be delayed. Depending on age, the larvae were fed 3000-20000 cell/mL of culture water of Tahitian Isochrysis daily.

Note: To increase the success rate of Metamorphosis, Biologists exposed larvae to the hydrogen peroxide inducer.

Fighting Conch snails can be kept with other fish and snails with ease in a size-appropriate tank. They may become aggressive with another male Conch snail. However, their relatively minor acts of aggression (e.g., pushing) cannot harm anybody. So do not be afraid because of their name.

They are compatible with:

Some wrasses, Coral banded shrimp, and hermit crabs may take advantage of the large opening in their shell to attack or eat Fighting Conch snails. Although, unlike other snails, these snails are the masters at shaking them off. I would still watch these pairings closely when they are comparable in size.

Fighting Conch snails are easy to care for. Like most Conch species, they are known for digging into sandy substrates and keeping the sand bed stirred up. Although they can eat nearly everything, they are mostly herbivorous. These snails are hardy and interesting to watch. They are better adapted for a community tank than most

They are just very cool-looking creatures and one of the most useful snails in the saltwater tanks.