Halloween hermit crabs (Ciliopagurus strigatus) make an excellent addition to your reef aquarium. If you already have one, you must know this already, but for those of you, who do not own any Halloween hermit crabs, read below for more information on why they deserve a spot in your home aquarium.

Don’t get scared by the name—Halloween hermit crabs do not look spooky at all.

It makes them a popular choice for both ponds and indoor aquariums as scavengers and algae-eaters.

Ciliopagurus strigatus is the most common species of the Ciliopagurus  genus in the world. They are typically found in the low intertidal or shallow waters (between 5-15 m), especially along the sandy areas around reefs.

Description of the Halloween Hermit Crab 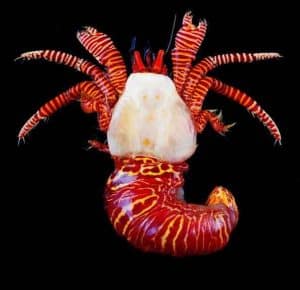 Their legs are patterned with red and orange stripes, which makes their appearance reminiscent of many Halloween decorations we see at the end of October. The flattened carapace of the Halloween hermit crab is pure white; abdomen red with a pattern of undulating yellow lines.

In fact, their coloring is so distinctive that some consider the Halloween hermit crab to be the brightest crustacean found in home aquaria.

Note: There are 4 hermit crabs of the genus Ciliopagurus which are morphologically very similar. Even biologists can separate them with the confidence only by their coloration. These are Ciliopagurus Tricolor (Blue leg hermit crab – read my guide), Ciliopagurus Galzini, Ciliopagurus Vakovako, and Ciliopagurus strigatus. All of them have similar color patterns of transverse bands on the chelipeds and walking legs, but each species can be easily recognized by the distinct color and/or disposition of these bands.

Halloween hermit crabs tend to run on the larger side. They can grow up to 2 inches (5 cm) in size, which is larger than many other species of hermit crab.

According to different reports, Halloween hermit crabs can live up to 8-10 years in captivity. This is a lot for a small crab!

Behavior of the Halloween Hermit Crab

Halloween hermit crabs are nocturnal creatures. They will typically rest during the day, and come out at night.

In general, they are pretty active and always looking for food. However, they do sometimes spend a lot of time inside the shell without movement.

Unfortunately, Halloween hermit crabs are not completely harmless, especially when we are talking about shells. However, they can coexist peacefully with other tankmates if they have everything they need.

Feeding them is easy because Halloween hermit crabs are omnivores. They are great scavengers and clean up crew. They will eat absolutely anything they can find in your tank, including detritus, leftovers, dead organisms, green hair algae, and cyanobacteria.

The benefit to their natural diet is that their taste for algae means that Halloween hermit crabs will naturally rid your aquarium of excess algae. However, do not fall into a trap by thinking that once they are scavengers. They will take care of themselves. Of course, they will… by becoming more aggressive.

Feed your Halloween hermit crabs once or twice a week. For example, you can feed them – raw table shrimp, frozen mysis shrimp, silver sides, scallop, clam, mussel, and algae tablets. Yes, do not forget about algae. If there is no algae in your tank, give them algae tablets.

In general, Halloween hermit crabs are reef-safe. Although you should not worry about them eating your corals, because of their size, they can accidentally knock them over or simply damage them.

However, the good news is that Halloween hermit crabs spend most of their time on the substrate.
Note: To prevent any incidents some aquarists advise to glue corals to the rocks.

Halloween hermit crabs are fairly easy to take care of. In fact, they are considered pretty low maintenance across the board because they are very adaptable and can do well in a range of water conditions. Nonetheless, every creature has its own set of needs, and this one is no different.

It is recommended that you provide a tank that is at least 15 gallons (~60 liters) per adult Halloween hermit crab you plan to house in the tank.
Note: More important than tank size is making sure your tank is completely cycled before introducing any Halloween hermit crab.

They prefer aquariums with live rock as well as a substrate for them to sift through (like sand or small gravel).  As I have mentioned earlier, Halloween hermit crabs are nocturnal and often hide in or near the live rock when the tank lights are on. 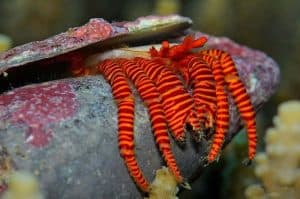 Absolutely important: When caring for Halloween hermit crabs (any hermit crabs), be sure to have several extra empty shells available for them to use. In the wild, the need to find a new shell has driven Halloween hermit crabs to open hostility, with instances recorded of some crustaceans attacking even snails or fighting with each other for a larger/proper shell.

The acquisition of appropriate snail shells is critical for all species of hermit crabs. Having shells of multiple sizes in your tank will ensure that your Halloween hermit crab is able to easily find a new shell when the old one gets to be too small. 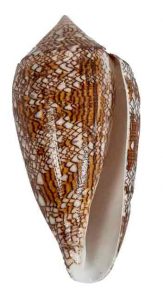 Unlike most types of hermit crabs, Halloween hermit crab has a flattened body that allows it to use cone shell (Conus textile snails) with a narrow opening.

Conus textile snails are carnivorous and predatory, they preying on other mollusks. These snails are one of the most venomous creatures on earth and they have been responsible for numerous fatalities across the world.

Halloween hermit crabs do not need fancy filtration and lighting. You can just purchase a normal LED aquarium light.

Like all crustaceans, they need to molt at regular intervals to grow in size. During this period of time, Halloween hermit crab will try hide till it’s new shell has hardened. After every molt, hermit crabs will need larger shells. If they cannot find the empty one they will actively fight over shells.

Note: Most metabolic activities are reduced during the pre-molting process. So, if you see that your Halloween hermit crab does not eat as it used to – this can be the sign of molting.

When reproducing, male crabs are able to detect when females are fertile. After detecting this, the males attach themselves to the females until the eggs are fertilized. Those eggs then stay on the underside of the female crab, inside her shell, until they hatch.

It is relatively difficult to breed Halloween Hermit Crabs in captivity. The problem is that it looks like Hermit crabs’ larvae have differing salinity needs making them almost impossible to captive breed. 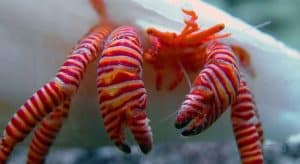 Be warned: Halloween hermit crabs are not necessarily the most docile of animals. They can turn hostile to other animals in your aquarium if not properly fed.

First of all, they should not be hungry. Some aquarists reported that their hermit crabs even managed to catch small bottom-dwelling fish, such as dragonets, firefish, some gobies, etc. in the tanks.

Personally, I would describe them as “semi-aggressive”. While these crabs are great, it is certainly important to think twice about which other animals you put in the tank with them. Do observe very carefully as there are reports of occasional rogue individuals.

Obviously, it will be risky to keep Halloween hermit crabs with decorative snails. Even if you give them lots of extra empty shells, the risk of aggression will remain.

Halloween hermit crabs are fantastic little crustaceans that look super cool and have some real benefits for your aquarium.

These hermit crabs are great for the quality of water in your marine aquarium. They eat algae, so they will remove excess algae from your water, thereby naturally keeping your aquarium clean and healthy for the rest of your inhabitants.