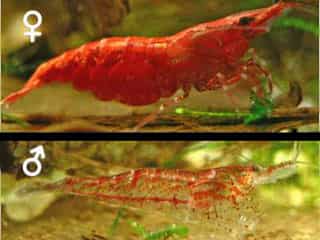 Today I will tell you about freshwater dwarf shrimp with direct development (high order) (such as Red cherry shrimp, Crystal red shrimp, Snowball shrimp and etc.) and how frequent mating affects them. It means that baby shrimp hatch directly from eggs without intermediate planktonic stages (a low order, like Amano shrimp, Ghost shrimp and etc). Because of the high costs of reproduction in species with direct development, biologists decided to test how frequent breeding can affect female’ reproductive abilities. In addition, is there any correlation between baby shrimp quality, successive mating, and female age?

In addition, successive mating led to high female mortality. It shows us the physical exhaustion in females of Neocaridina shrimp because of the high energetic costs associated with breeding in species with direct development.

The shrimp hobby is gaining immense popularity in the world. That is why it is surprising to find so little information about the effect of multiple mating on the breeding abilities of freshwater shrimp.

This information can be extremely useful to any shrimp breeder. A combination of many factors like photoperiod, temperature, density, ratio, and spawnings let us be more successful at keeping and breeding shrimp.

In order to estimate the quality of baby shrimp, biologists exposed baby shrimp to a stressful situations, such as starvation. The resistance of juveniles to temporary starvation is a key factor for their successful growth in nature.

In freshwater habitats, they depend directly on the energy reserves given by females to the oocytes. Under the stressful situation, juvenile shrimp start using these reserves from embryonic development. It gave researchers an opportunity to evaluate maternal influence as well.

Basically, there were two types of experiments:

In addition, each experiment included many stages of starvation. Depending on stocking density, females mated repeatedly during a life span of 1–2 years, with short intervals between mating.

The percentage of baby shrimp with more than 28 juveniles, was as follows:

The quality of juveniles from the first six successive spawnings of experimental females was checked through a food restriction. Female mortality increased throughout these experiments. It reached 37% toward the end of the experiments.

At the same time, the proportion of berried females over successive spawns decreased. The interval between breeding, the number, and the size of newly hatched juveniles were similar in all cases.

There was no difference among those that mated many or few times. However, the high mortality rating of female shrimp let us suggest the presence of reproductive fatigue due to successive breeding. It can also be due to the insufficient time between breeding. Females did not have enough time to restore after frequent breeding.

According to results, juveniles of Neocaridina shrimp from later spawns were capable of coping with starvation periods of at least 8 days. Moreover, there was some increase in mass and there was no decrease in survival.

Juvenile shrimp have specific dietary requirements for proteins, minerals, and vitamins. They keep and store these components reserve tissues when food is abundant. Proteins were the major source of energy during starvation periods.

In this context, starvation tolerance can be explained by the energy accumulated by juveniles from the remnant egg yolk. It allowed them to survive during the first days after hatching without external food sources. As the energy reserves are consumed, juvenile performance may deteriorate, leading to a decrease in survival and growth if the starvation period continues.

Overall, these results indicate that juvenile performance, as measured by growth and survival, did not decline in later spawns and was even higher in some cases. In other words, multiple breeding had no negative effects on juvenile quality (at least over the initial six successive spawns evaluated).

Note: Growth, survival, and biochemical composition of food-restricted juveniles showed similar or even higher values in later spawns as compared to the first spawns.

It is very good to know that baby shrimp quality does not decline over consecutive spawns. However, we need to be very careful if we want to protect the females from overstraining due to multiple spawning.

Keep in mind that food abundance and high temperature are the main factors of a fast metabolism. The faster their metabolism the shorter is the life of the shrimp.

One thought on “How Frequent Mating Affects Dwarf Shrimp”