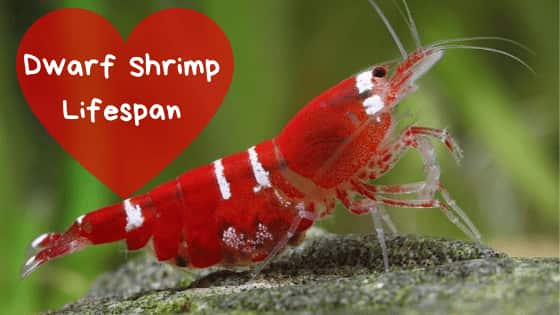 There are many types of dwarf shrimp in this hobby. Although in different countries they can be of different size, shape, and color (even between the same species), as a general rule, dwarf shrimp are considered to be far more delicate than fish. Unfortunately, the most popular shrimp species have a short lifespan. However, there are also real long-livers, which will stay with you for many years. So, how long do dwarf shrimp live?

In short, according to different reports about Neocaridina and Caridina shrimp, the average life span of these species is 12-24 months. Ghost shrimp (Palaemonetes paludosus) can live from 1 to 3 years. Amano shrimp (Caridina multidentata) has a lifespan of 2 – 5 years. Bamboo fan shrimp (Atyopsis moluccensis) lives up to 6 – 7 years. Cameroon fan shrimp (Atya gabonensis) can live 8 – 10 years. 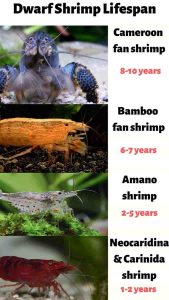 Nonetheless, all these numbers are not set in stone. In some cases aquarist claim that their shrimp live even longer (sometimes significantly). However, for that, you need to create almost optimal conditions for their life.

Note: There is no a single biological study about the lifespan of dwarf shrimp in the wild. In general, all information about the lifespan is the result of multiple and combined experiences of shrimp keepers and some scarce presumptions from some biologists.

Interesting: In fact, the Atyidae family of freshwater shrimp have been with us since the mid-Cretaceous period, it is almost 100 million years ago (if not earlier)! They are almost 10 times older than the latest common ancestor of humans and chimpanzees.

What Affects the Lifespan of Dwarf Shrimp?

Well, how can I put this gently? Basically, it will be everything that you have in (and, in some cases, around) your shrimp tank. In general, shrimp are not the most enduring aquarium inhabitants. Nonetheless, there are always exceptions and some species can be very hardy. For example, Neocaridina davidi or Red cherry shrimp is even considered to be an invasive species. This species is native to Russia, Korea, Japan, China, Taiwan, and Vietnam. Actually, it is not a surprise because they can live in various kinds of water. Some aquarist even joke that only cockroaches and Neocaridina shrimp can survive a nuclear explosion.

Nevertheless, all jokes aside, it does not mean that they will thrive if you put them to their limits. Most likely they will not breed at all. In addition, their lifespan will be very short. So, the first things we should focus while keeping shrimp are:

Temperature and Lifespan of Dwarf Shrimp

The metabolic rates and molting are two sides of the same coin. Because the growth rate is a function of both the frequency with which they molt and the size increase per molt.

Every time shrimp molt, they spend a lot of energy. Due to the fact that they molt more often (under high temperature), they do not have time to restore their reserves. As a result, they live in constant stress.

In addition, dwarf shrimp reach sexual maturity and start mating earlier. As I have written in my article about it. Frequent mating lead to physical exhaustion (especially in females) because of the high energetic costs associated with breeding.

Therefore, low temperature (of course, in optimal range) will increase their lifespan significantly. Shrimp will grow slower and will become bigger because their metabolic rate will be slower as well. However, it will also give them time to restore the necessary energy. Thus, the mortality rate of your shrimp colony will go down.

Water parameters for Your Dwarf Shrimp

Therefore, you need to pay attention to water parameters very closely. Keep in mind that anything affecting the water balance will affect molting and potentially can cause molting problems.

Perform water tests regularly. You need to know the level of ammonia, nitrite, nitrates, coppers, etc. in your shrimp tank. 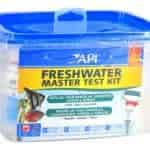 Do not forget, that maintaining optimal water parameters involves performing water changes when they are needed.

Stress for Your Dwarf Shrimp

Dwarf shrimp do not do well under stressful conditions, especially during breeding time. Therefore, you should minimize or at least reduce stress factors.

Potential stressors for dwarf shrimp include:

For example, although dwarf shrimp do not hear in the same way vertebrates do, they are able to sense vibrations and movements associated with sound production. So, it will not be a good idea to put your aquarium near TV, sub-woofer and etc.

Overfeeding is the number one problem of all dwarf shrimp, fish, and snail tanks. We love our pets too much and, in most cases, do not know when to stop feeding them. However, overfeeding can potentially deteriorate your water quality thus shortening their life span. Uneaten food can also quickly decompose, causing organic and inorganic compounds that tip the balance of a tank’s chemistry. In addition, it can also cause an outbreak of infection. Scutariella Japonica, Planaria, Vorticella, Hydra and Ellobiopsidae or Green fungus can become a very serious problem. It is not a joke to have these parasites because some of them are extremely dangerous for the dwarf shrimp.

If you decide to keep dwarf shrimp in a community tank, choosing the right tank mates is absolutely crucial. Otherwise, your shrimp will always feel the danger, hide and switch mainly to nightlife.

Overstocking can also play a negative role. You need to have the ratio that will not stress out the shrimp.

Dwarf shrimp lifespan greatly depends on the external circumstances. Therefore, if the stated life expectancy can be an average number we can still increase it by following these simple 5 golden rules.