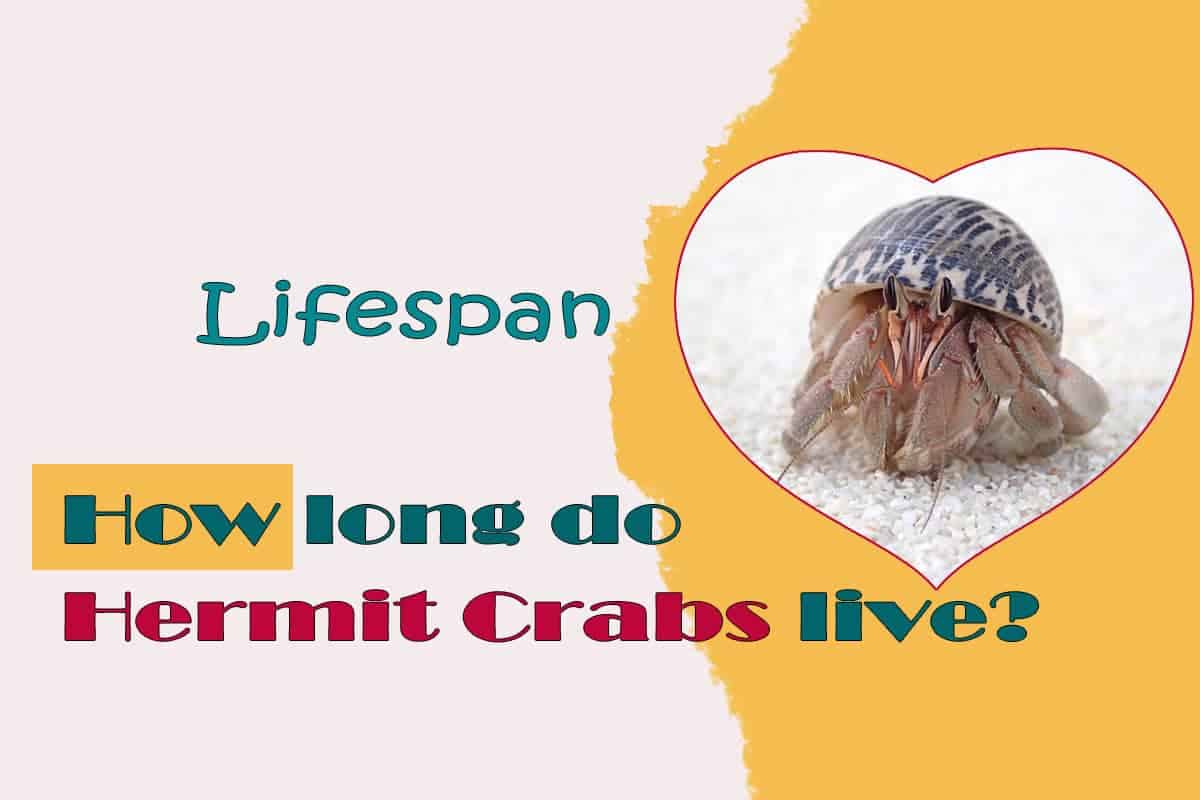 A small and cute Hermit crab can be a highly entertaining pet, and you can spend hours watching them crawling around their crabitat.

So, if you are considering getting the sociable, and widely popular Hermit crab as a pet (or maybe you already have one) you should be aware that keeping them can be a lifelong commitment.

In the wild, hermit crabs can live up to 30 years and even more! However, in captivity, they can be expected to live for 3 – 12 years on average.

Unfortunately, captive Hermit crabs live much shorter lifespans where the lifespan of a Hermit crab is proportional to the amount of care, attention, and love that is given to them.

So, why do they live less in captivity? That is because Hermit crabs’ lifespan is proportional to the amount of care, attention, and love that is given to them. Unfortunately, many Hermit crab owners do not bother to create optimal conditions or completely ignore certain care requirements.

Hermit crab Species Lifespan in the Wild and as Pets

There are no detailed studies on the longevity of different species of Hermit crabs in the wild.  Therefore, I did my best to gather all information based on randomly documented facts and observations of the Hermit crab owners.

Let’s take a look at the basic types of pet hermit crabs: 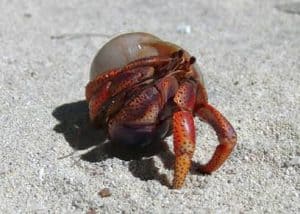 Also known as the Soldier crab, West Atlantic crab, Tree crab, Purple pincher, or PP, this is by far the most popular hermit crab pet.
Under optimal conditions, they can live up to 15-20 years. However, some individuals were recorded to live to the age of 40 years!

The Ecuadorian hermit crabs are slightly less common but still easy to find in pet stores.
These crabs have been known to live to over 30 years while an average lifespan is anywhere between 10-15 years.

The Strawberry hermit is a widespread Hermit crab across the Indo-Pacific region and is also commonly traded to hobby aquarists.
In the wild, animals may live for 25–30 years but only live for 1–4 years in captivity even with the best care.
That is because it is really hard to replicate their preferred natural environments, which also include a constant source of readily available seawater. 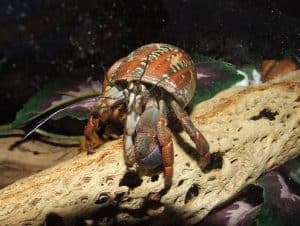 Even though Ruggie Hermit Crabs are one of the most recent species of exotic land hermit crabs, their popularity as pets is rising due to their attractive colors and easy maintenance. They vary widely in color (green, brown, and tan, but black, white, pink, blue) and can look a lot like a Coenobita compressus at first glance.

Although there are some reports that Ruggie Hermit Crabs have been maintained in captivity for more than 15 years, an average lifespan is about 4 – 7 years. 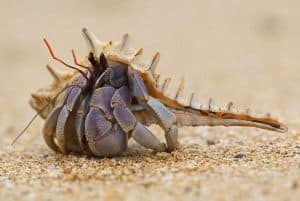 This species is distributed in the Indo-Pacific region from the east coast of Africa to the Philippines and Japan. Compare to other species why are not really common in the hobby.
Limited information on the life history of Coenobita violascens has been known and recorded. There is no official data on how long they can live in the wild. However, according to some reports, in captivity, they can be kept up to 8 – 12 years. 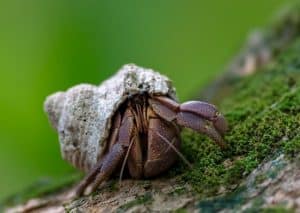 This is one of the larger species in the genus Coenobita. These hermit crabs are known to grow to the size of a coconut. Because of their size, they are rarely kept as pets.

According to Wikipedia, they can live 12–70 years! Unfortunately, all my attempts to find the source of this data did not succeed. However, considering the fact that bigger species of hermit crabs live longer, I would not be surprised to see 40 or 50 years old Coenobita brevimanus.

Probably, this is the rarest hermit crab species outside Australia and there is also a reason for this. Based on Federal Register of Legislation of Australia, you need to have a license to harvest Coenobita variabilis.

In 2019, biologist Günter Vogt finished his compilation of longevity data in decapod crustaceans. According to his study,  Coenobita variabilis can have a lifespan in the wild up to 20 years. Though in captivity it is believed this species can reach ages of up to 10 years old.

Interesting facts: Even though they are in white color when they are juvenile, they will become light blue to dark purple when they grow up. They can also rub the tip of their tail (uropods) against the inside of the shell rapidly to make the chirping sound.
This species of Hermit crabs are rarely seen in pet stores and there are not many people who have been keeping them for many years. Nonetheless, I have seen on forums a few people saying that their Blueberry hermit crabs were over 4 years old. So, it seems to me that they can have from 8 to 10-year lifespan if properly treated.

Why do Hermit Crabs Live Less in Captivity?

Actually, it is pretty simple to say why their life is greatly reduced – because, unfortunately, many hermit crab owners are unable and unwilling to meet all of their needs.

The tendency to impulse buy Hermit crabs is very high as people think that keeping Hermit crabs is easy and simple. So, they do not even bother to do their own research to find out more about the species they have.

Why is it so hard to breed them in captivity? Because they have specific care requirements that can be really hard to replicate in home conditions.

That is why, if you decided to be in this hobby, it is your job at least to do your best. You need to find out specific requirements for the hermit crab species you have, for example:

Considering the fact that different species like different shells, we have to pay extra attention to this matter.

One of the most important factors in helping your Hermit crab to live longer and happier is to maintain a healthy diet for them. A feeding preferences would correspond to giving them the foods that they would eat most often in their natural habitats – or at the very least, foods that come as close to this as possible.

Hermit crabs do not have lungs and they cannot breathe in water or dry air. This leaves the Hermit crabs in a precarious situation where they are constantly dependent on moist, humid air to breathe.

Hermit crabs are burrowers by nature. They bury to protect themselves during the stressful time of molting and to hide from the heat.

Therefore, it is extremely important that the substrate in your crabitat is deep enough to accommodate your Hermit crab’s need to burrow. The rule of thumb is that the depth of the substrate should be at least three times deeper than the biggest crab.

Do not forget, that Hermit crabs are social animals that do best in groups. This is another important factor when it comes to a hermit crab’s overall health and quality of life.

It’s therefore important when considering owning a hermit crab that you also strongly consider owning more than one.

Can hermit crabs die of loneliness?

Well, hermit crab living alone in isolation will get very lonely which leads to stress, depression, and even diseases. All of these factors are known to lead to a reduced lifespan.

Like always, there is no one definitive answer to how long do Hermit crabs live as pets. In the wild, depending on the species, they can live for 10-20 years or even more, however, in captivity, they often survive less than a year or two, despite their long lifespans.

Land hermit crabs have become pretty popular as pets over the last few decades and the trade has increased hugely in recent years. Unfortunately, the level of attention and care that a pet hermit crab needs are grossly underestimated. In addition, the problems in hermit crabs often don’t show up until they are very ill.

That is why before anyone commits to the responsibility of owning a pet, they should know that improper care will shorten your hermit crab’s life by a few years!