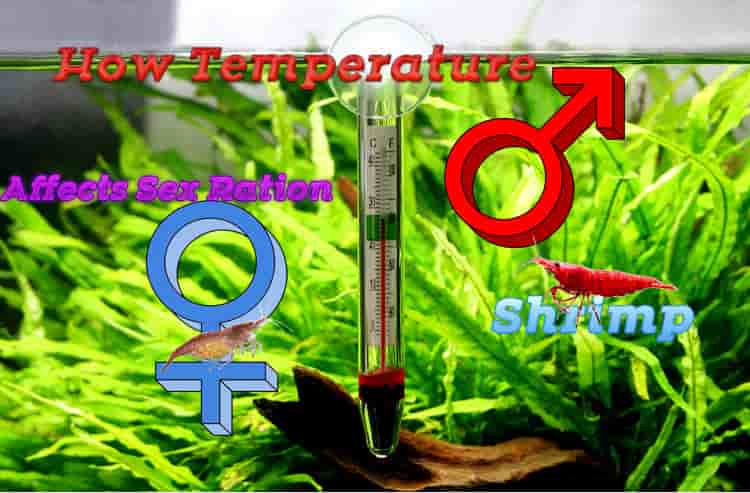 Water temperature is one of the most important physical factors affecting the survival, growth, and breeding of Dwarf shrimp in our aquariums.

That is why we need to know the effect of water temperature in order to determine the optimum temperature for the ornamental shrimp. By manipulating this parameter, it may be possible to reduce the time needed to breed dwarf shrimp.

In short, the body weight, growth, and incubation period of shrimp eggs increase with decreasing water temperature. However, high temperatures increase mortality, possibly because body tissues contain less protein. That can cause molting problems for the shrimp.

As always, I will provide you with information received from several studies about shrimp. Therefore, if you get interested and decide to learn more, you can check them yourself. Nonetheless, because these studies are overloaded with excessive information, which will be interesting only if you are a biologist. That is why I refined them here in a simple way. This information will also expand the scarce literature addressing those topics on freshwater shrimp and can be useful for any shrimp breeder.

Note: Although the studies were about Neocaridina shrimp, we can still use this knowledge to some degree with other shrimp species, because the principles remain the same.

Temperature and Survival of the Shrimp Eggs

The temperature (24°C and 28°C, (75F – 82F) did not have any effect on the eggs. The number of baby shrimp that hatched per female was relatively similar among these temperatures. At 32°C (89F) females lost their eggs in all cases, even though they were fertilized. No ovigerous female was found at 33°C (91F) at all.

Ovarian maturation and spawning were inhibited at 33°C (91F). It indicates a negative effect of this temperature on nutrient transfer to the oocytes of the shrimp. This effect was rapidly reversed after females were moved back to 28°C (82F). Some of the female shrimp showed mature ovaries and even mated after only 9 days at this temperature. The eggs from transferred ovigerous females were almost of similar quality.

Some physiological processes of the shrimp, such as growth, storage, or reproduction, cease if the available energy covers only basic maintenance costs, but they resume under more favorable conditions.

Note: Ovarian maturation, which involves yolk synthesis and storage in the oocytes, is an energetically costly process for the dwarf shrimp. The yolk is mainly composed of proteins, lipids, and carbohydrates.

The mobilization of these reserves to maturing oocytes may determine egg quality, which is related to the ability of an egg to undergo development. There is a direct correlation between water temperature and the use of such reserves by the shrimp.

You can also read my article “Missing Shrimp Eggs: Why This Occurs”.

Temperature and Number of Shrimp Eggs

Different studies also showed some controversial results about the number of eggs under different temperatures. In one case, the biologists registered that the actual fecundity was similar in all temperature variations. In general, every female shrimp had 24.2 (±0.1) juveniles per hatch. According to another research, the results showed that at low temperature, the number of eggs decreased (at 20°C (68F) – 24 eggs, 23°C (73F) – 32eggs, and 26°C (79F) – 34 eggs).

It seems that we need more studies on this matter.

Temperature and Incubation Period of the Shrimp

Water temperature influences the survival and development of embryos and larvae of the shrimp. All experiments showed a decrease in the incubation period because of increasing water temperature.

However, high temperature (32°C, (89F) was associated with lower survival, higher energy consumption, and even serious deformities of embryos. Moreover, the temperature experienced during the egg development period may influence larval biomass at hatching and subsequent larval development. Therefore, special care must be taken when the temperature is manipulated to accelerate embryonic development.

The average duration of the incubation period increased significantly with decreasing water temperature in the tank:

Percentage of ovigerous shrimp females was very different in all temperature variations:

It seems from the results that the higher energy demand resulting from metabolic rate increase with temperature led to the accumulation of insufficient reserves for ovarian maturation and spawning.

Temperature and Survival of the Shrimp

The survival rate during the growth period at 24C (75F) and 28C (82F) was about the same in all experiments. However, as we can see, it significantly dropped at high temperatures (32°C (89F)).

Once again, these results coincide with other experiments.
You can read more about those experiments in my article “Breeding and Life Cycle of Red Cherry shrimp” right here.

Temperature and Growth Period of the Shrimp

The results of the experiments showed that at day 30 of the 90-day period, body weight and growth increment at 24°C were lower than those at 28°C (82F) and 32°C (89F). On subsequent days, growth increment at 24°C exceeded that at 28 and 32°C, leading to a similar bodyweight of the shrimp. These results suggest growth was delayed at 24°C, but only for 30 days after hatching.

However, during the growth period, dwarf shrimp reached sexual maturity and mated, with the highest proportion of ovigerous females occurring at 28°C.

Temperature and Metabolism of the Shrimp

The colder it gets, the slower its metabolism and the bigger shrimp can grow. In addition, they will eat and breed less. There are countless examples that Cherry shrimp can survive at 12C (55F). Even under such extreme temperatures, they will still do a good job as a clean-up crew of the aquarium. However, it will also slow or stop reproduction completely until the temperature goes up.
Note: Sudden changes in temperature will shock shrimp and kill them. Everything should be gradual.

Higher metabolic rates at higher temperatures are accompanied by an increase in energy demand, which is mainly supplied by lipids in dwarf shrimp. The lowest lipid concentration in shrimps reared at 28°C may also be explained by the fact that reproduction was more pronounced at that temperature than at the other temperatures tested.

In this sense, several studies have demonstrated that during periods of high-energy demand, such as oogenesis, there is a pronounced degradation of lipids for yolk synthesis, which is the major source of nutrients for the developing embryo.

Taking into account all these results, we can conclude that the best temperature for juvenile shrimp to grow, mature, and breed as fast as possible is around 28°C (82F).

However, this may lead to the physiological exhaustion of shrimp, as evidenced by the lowest lipid concentration found at that temperature at the end of the growth period. This exhaustion will lead to a short lifespan, increase feeding, and smaller body size. This is not good unless you need to have mass shrimp production and you do not care about their life that much.

If you are not a professional shrimp breeder, you need to have 21-24C (70-75F) in your tanks to get an optimal combination of growth and reproduction rates of the shrimp.

Nonetheless, once females lay eggs they can be exposed to higher temperatures, in order to accelerate embryonic development without affecting juvenile size at hatching.

2 thoughts on “How Temperature Affects Breeding of Dwarf Shrimp”