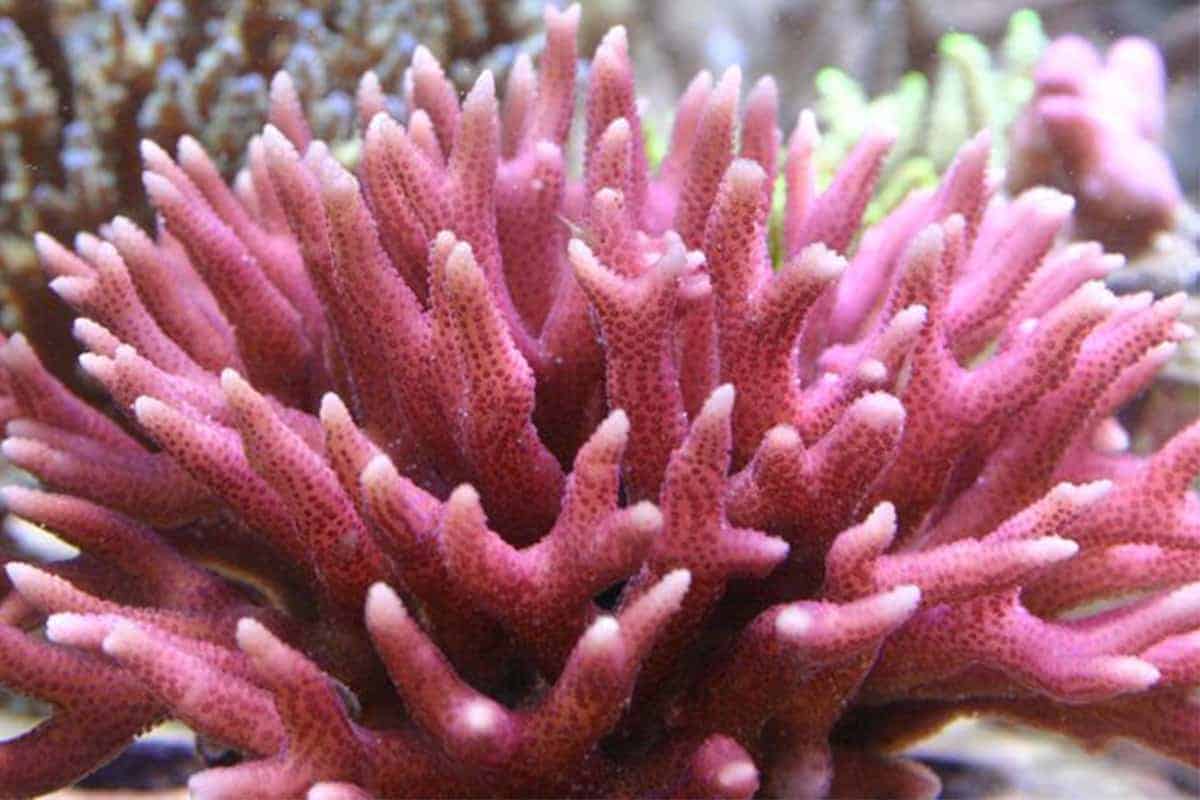 Seriatopora species form clusters of corals commonly referred to as “the Bird’s Nest Corals”. Although these are one of the hardiest and fastest growing SPS corals in the aquarium hobby, they have been also known to be very temperamental and need very mature stable conditions for them to thrive. In this article, you will know how to care for the Bird’s Nest Corals and what you should do to avoid potential problems with them.

The Seriatopora hystrix species inhabit in shallow reef habitats in the Indo Pacific. The corals can be found around the islands of the Indo-Pacific such as Fiji, Solomon Islands, and the Great Barrier Reef.

They may dwell between 1 to 30 m (3 – 120 feet) underwater. The depth makes the coral either thicker or thinner, and can also affect how much water flow and light they can stand.

Description of the Birds’ Nest Corals

Currently, there are 7 species of Seriatopora with Seriatopora hystrix being the most commonly seen species in the hobby.

The Bird’s Nest Coral has branches with a slender base. The branches may have spikes or be smooth. You can tell the Seriatopora hystrix apart from other corals based on the structure (the length of the branches are in the neat little rows) and their coloring.

For example, some of the species are solid pink, yellow, or purple. If you see a brown Seriatopora hystrix, it will often have green or pink highlights.

There is a type of marine algae, known as zooxanthellae, that lives in a symbiotic relationship with the S. Hystrix. The zooxanthellae use photosynthesis in order to create sustenance. This is how the Bird’s Nest Corals receive most of their nutrients.

This species can also capture small food particles in their water columns and capture planktonic organisms. In addition, the species can absorb dissolved organic matter and can be fed fine particle foods weekly (such as Marine Snow). Calcium, Magnesium, Strontium, and Trace Elements should be added as supplements when needed.

Basically, all the Bird’s Nest Corals need is a well-feed reef tank, along with some fish, snails, crabs, shrimp, etc. for organic matter production.

The Bird’s Nest Coral takes an adjustment period in order to survive but they only need moderate care.

The species needs to be at least 3 inches (~7 cm) apart from other types of coral. They are, however, compatible with other members of the Seriatopora genus. The species should be placed at the top or mid-section of the tank.

Tanks should also be well-established before you introduce the coral because the coral may be unable to adapt to the tank. The species needs time to adapt to your tank and will establish rapidly after they do.

Considering the fact that the Bird’s Nest Corals can grow big anough, I would say that a 10 gallon (40 liters) tank should be the minimum size for these corals. More is fine and can provide extra room to space out your corals if needed.

When it comes to lighting, we have to take into consideration varieties of the Bird’s Nest Corals. In nature, according to the study, the same species can live in different reef habitats and adapt to different light between locations and also across depths at a single location.

Note: The Seriatopora Hystrix that are found in lower depths with lower water flow will have thinner branches.

It means that even within the same species the coral can have genetic differences. Therefore, some yellow Bird’s Nest Corals can thrive in low light while others might require moderate to high light.

Please, do not underestimate the importance of this information. You need to find out more about the corals you are going to buy. If you have Bird’s Nest Corals type that came from deeper water, too much light may actually bleach the coral. Coral is not dead until the entire coral is ‘bleached’.

Nonetheless, in general, the Bird’s Nest Corals need moderate to high amounts of light due to their reliance on zooxanthellae for food. The lighting types recommended are T5’s or Metal Halides. The Metal Halides should be able to be placed in the middle regions of the tank. T5 would have to be closer to the top of the tank in order to produce good growth and coloration results. Modest light can also be a cause of color fade.

If hair algae are beginning to grow on the corals, then you should make the water flow higher. Larger frags may also need higher water flow to keep healthy.

Water quality should always be within the limits of what is considered appropriate for any reef tank.

How often you do water changes is up to you but they should be done routinely because this species is very susceptible to changes in their environment.

The tank needs to be clean. If the tank is dirty, the species will be vulnerable to diseases caused by a low-quality tank. Good water flow can also keep cyanobacteria and algae from overwhelming the coral. If you prefer to clean your tank less, you can do a 20% water change once a month. You can also do a 10% water change twice a week or a 5% water change weekly.

The water parameters should be stable when it comes to the species. Nitrate levels also must remain low. In addition, your calcium and alkanity levels should be maintained. It is also extremely important to keep the phosphate level at 0 as corals generally cannot tolerate phosphates.

In nature, the Bird’s Nest Corals can breed by sexual and asexual means.
Note: Some aquarists believe that it is possible to identify males and females by the size. Personally, I do not think so.

Fragging is extremely easy compared to many other types of coral. You can simply break off a piece but it is better to make a clean cut. You should then glue the piece to a frag plug using either underwater putty or 2-part epoxy.

When you cut the piece off, you will experience some slime. This slime should not come in contact with other corals. Also, be sure to glue the piece on its side rather than straight up in order to encourage faster growth.

For the most part, an S. Hystrix coral that has been adjusted to your tank should do well. They are very disease resistant. The biggest disease cause for the coral is a dirty tank.

The Bird’s Nest Coral species also develop differently when exposed to different types of water flow. It is very interesting to know that these corals have a structure memory. They start growing to a particular shape to optimize the effect of water movements around them. This can turn into a problem in new aquariums because their form will not be properly suited for the new flow patterns. As a result, in the absence of proper nutrition, the Birds’ Nest Corals can start decaying from the inside.

Bleaching: If your coral is bleaching, it is best to first check your water parameters to see if any of your levels are off.

Bleaching can be also caused by too much light but it can also be caused by temperature changes, low salinity, and/or a lack of nutrients. It is possible to save your coral by removing the dead parts and making sure that your water parameters, light, and flow are at the correct ranges. Corals that are unable to adapt to an aquarium tank may also bleach. Adding coral to a tank too early is one of the biggest hazards of owning the Bird’s Nest Coral.

It is worth mentioning, that you also might need feeding amino acids to the corals.

Placements: The Bird’s Nest Corals do not like to grow downward.

Compatibility of the Birds’ Nest Corals

The species happens to be a mild-mannered species. They get along with corals within their genus. However, they will be aggressive to corals outside of their genus. You should be sure to put the corals away from other corals. The corals can also co-exist with well-fed fish and certain species of crabs may inhabit the coral. The crabs also use the coral as a mating ground.

A certain kind of crab, Hapalocarcinus marsupialis, can live in symbiosis with the S. Hystrix species. The crab will also change the growth of the species. The female crab will use the branches to form a cage which is her permanent home and mating grounds. The coral also does well with well-fed fish that can drop food particles for the coral to catch.

The Bird’s Nest Corals do well with well-fed fish, crabs, snails or shrimp.

The species can be brittle but no worries! If you buy the coral and it breaks during transit, you can just glue the pieces to frag plugs in order to create new separate colonies. You can buy the coral in pet stores. You can also buy them online at stores like Tidal Sources and Vivid Aquariums. The lowest price that I have seen for the coral is $29.99. On the high end, the coral tends to be 90 dollars or more.

The corals may not be the best fit for new aquarists or aquarists that don’t enjoy having to test their parameters often. On the other hand, the coral is very beautiful and it is incredibly easy to create new colonies. Once the coral has adjusted, you can expect the corals to act much hardier than when first inserted into the tank. The coral is also an awesome choice to place into a tank with fish because the fish will indirectly feed the coral through uneaten food particles.

If you think that all shrimp are tiny, cuddly, and peaceful creatures, you are wrong. Some species from the Macrobrachium genus (for example, Macrobrachium Lanchesteri or Whisker...

Today, I will be talking about the diverse types of plants suited for paludariums, but first off—what is a paludarium? The term “Paludarium” stems from the Latin words ‘palus’ which...