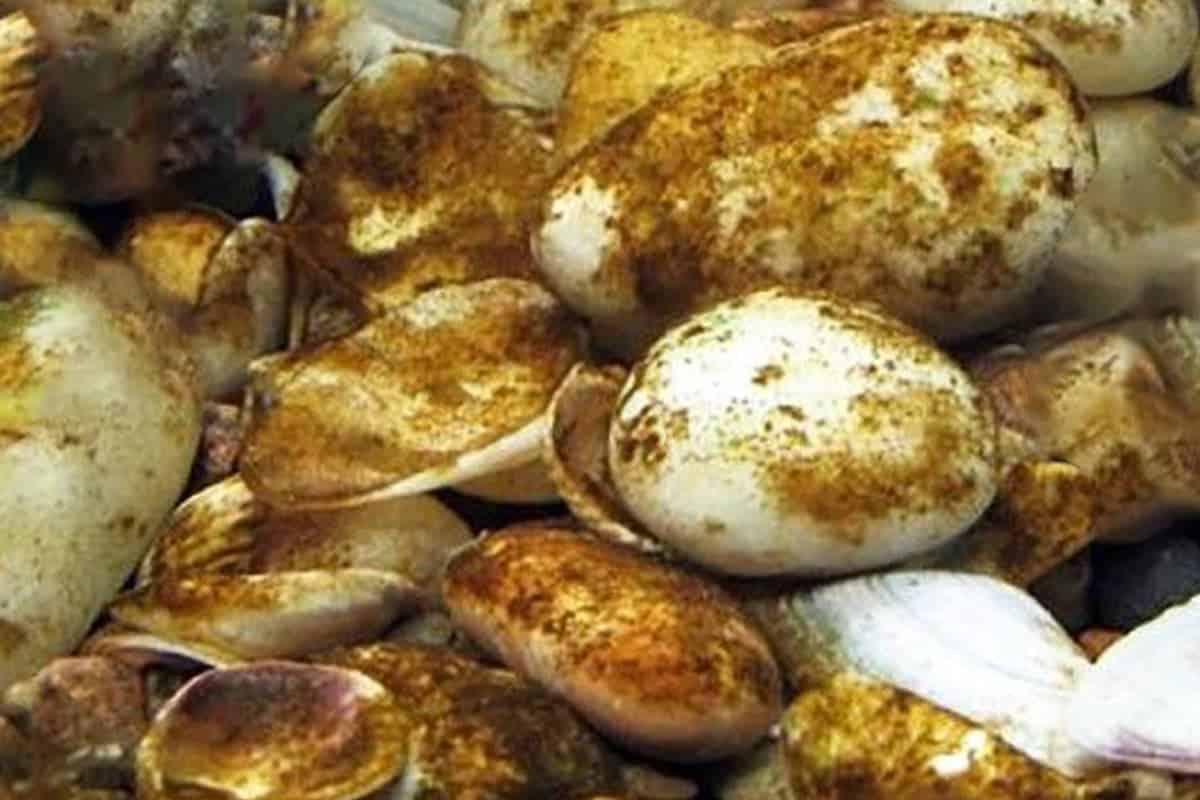 Have you ever spotted nasty-looking brown patches on diverse surfaces in your reef tank and wondered what they were?

Well, those brown irregularities are known as brown algae or diatoms, and they are capable of growing in freshwater and saltwater aquariums provided that there is an abundance of nutrients, silicates, and light which fuel their growth and maximize their chances of survival.

These algae often bloom in new tanks that are still biologically immature (cycling), and they may also exist in already established saltwater aquariums.

In most cases, Brown Diatom algae are a result of silicates in the water. Lots of aquarists just do not worry and leave them alone, so they just go away on their own. However, sometimes it does not work.

In this article, I will discuss how to get rid of brown diatom algae in saltwater aquariums using a variety of methods that actually work.

What are Brown Diatom Algae

Diatoms are a large group of unicellular organisms; of the class Bacillariophyceae and they are known to generate about 20 to 50 percent of the earth’s oxygen.

Additionally, diatoms constitute nearly half of the organic material found in the oceans; their silica shells form deep deposits on the ocean floor.

Diatoms are often brown/golden colored because of the yellow-brown chloroplasts and pigments they have— chlorophyll A and C, beta-carotene, fucoxanthin, and diatoxanthin. They also possess hard, porous cell walls made of silica, and these are called frustules.

These brown unicellular organisms occur either as solitary cells or colonies which can take different forms. Notably, in the presence of sufficient nutrients and sunlight, an assemblage of diatoms doubles almost every 24 hours through binary fission.

Being autotrophic organisms, they are capable of converting light energy to chemical energy by means of photosynthesis, therefore they will grow and multiply easily in reef tanks with ample lighting.

Also, because they feed off silicates, nitrates, and phosphates in the water column, the abundance of these compounds in your tank will make them grow rapidly.

Diatoms will most likely cease to exist when the reef tank is fully cycled i.e. biologically mature. The diatoms in the aquarium will then have to compete with microfauna e.g. green algae; which tend to outcompete them for the available nutrients, light, and space, hence denying them favorable growth conditions.

Moreover, aquarists can make use of various effective methods to eradicate leftover diatoms after the cycle and also to prevent future outbreaks.

Is Brown Algae Harmful to Fish, Shrimp, or Corals?

Brown algae will not harm fish, shrimp, and other animal species in your reef tank directly because it is not toxic or poisonous to them.

However, you will need to remove algae from your tank as they are likely to wreak havoc and make life uncomfortable for your corals.

Here are some reasons why you need to get rid of brown algae:

What Causes the Proliferation of Brown Algae in Saltwater Aquariums

The presence of high amounts of silicates in your aquarium is detrimental.

This is because diatoms use up silicates in the tank water to grow and build up their hard shells. Furthermore, one should be more worried about dissolved silicates and silicic acid which might be introduced into the aquarium by water obtained from local taps and wells.

Other sources of silicates may include additives, salt mixes, sand, and live rock. Always endeavor to test your local tap water for silicates and silicic acid before usage or use RO water.

The availability of excess nitrates in the tank water is a huge problem, since diatoms feed off it to grow, large amounts of nitrates will hasten the formation and spread of diatoms in your aquarium.

Apart from silicates and nitrates, brown algae will also utilize phosphates in the water column.

Nutrients are very essential for their survival, so you should starve them of them. Phosphate sources include decaying plant matter, dead algae, uneaten fish food, kH and pH buffers, fish waste, and local tap water.

High phosphate levels in the tank water can contribute to the proliferation of diatoms in your tank, hence be sure to constantly monitor the phosphate levels using accurate test kits and keep them within the recommended ranges.

Regarding lighting, I have some serious doubts. Lots of articles and Facebook groups and forums mention that lighting has been linked directly to the bloom of diatoms in saltwater aquariums; with it being a necessary requirement for photosynthesis.

All these sources claim that contrary to popular belief, diatoms will thrive in reef tanks with low light levels as they would in high light conditions. In addition, they will grow and reproduce especially when there is no competition for resources.

Well, I do agree that algae can be outcompeted, however, I have never had good results with switching to high light conditions. On the contrary, there were more algae on high-lighted spots and significantly less in darker places.

How Long Can Brown Diatom Outbreak Last in a Tank?

If we are talking about new tank setups, it can last until your tank is completely cycled and developed a balanced eco-system.

If we are talking about matured tank setups, well, it can last anything from a few weeks to a few months. Why? Because Everything depends on the abundance of nutrients in your water!

As long as Brown algae have enough food, they will grow.

Note: When Brown diatom algae start to die off the color will fade from it.

Ways of Getting Rid of Brown Algae in Saltwater Aquariums

The presence of Silicates in the reef tanks is the number one reason for the Brown diatom algae. Diatoms are incredibly efficient at extracting silicates from the water.

It is common knowledge that local tap water and well water contain contaminants that encourage the growth of brown algae in saltwater aquariums.

Therefore, it’s best to use RO water; buying bottles of RO water frequently may be too costly. Instead, in my opinion, it would be better to invest in a RO/DI unit to filter the water through a membrane filter cartridge, thus removing silicates and other impurities that promote diatom growth.

This is a good measure, and it will help in preventing future outbreaks of brown algae in your reef tank.

Some products like SERA Silicate Clear. According to the manufacturer, Sera marin silicate clear easily and permanently binds silicate.

2. Scrubbing away the brown algae:

Brown algae patches can be removed from surfaces in the reef tank with a soft sponge or scrubbing pad.

Ensure to scrub the algae with precision, and scoop the detached coats away immediately so they won’t float around in the water column or clog the aquarium filter.

3. Removing algae from the substrate:

This can be done using a gravel vacuum.

Make sure to stir/break up the brown algae patches from the sand bed or gravel. Afterward, hover the vacuum on the uppermost layer of the substrate to suck in the slimy algae coats.

You can equally use this opportunity to siphon off the fish waste and debris lying on the substrate to prevent the build-up of nitrates.

Also, don’t forget to clean the ornaments. Remove them from the tank, wipe off brown algae from their surfaces and dip in a bleach solution for about 10 – 20 minutes to kill the remnants attached to it. Afterward, rinse thoroughly and add the ornaments back into the reef tank.

Performing water changes is one of the sure ways to minimize the proliferation of brown algae.

Through regular water changes, nitrates and phosphates that diatoms consume can be effectively removed.

One can replace up to 50% of the tank water when combating severe brown algae outbreaks, whereas if it’s a minimal case, then a 20 – 30% weekly water change should be enough to keep the water free of excess inorganic compounds.

5. Turning off the lighting:

Instead of increasing lighting, as many people believe, I tend to agree with those aquarists who recommend turning off the lights completely to make brown algae unable to synthesize food, thereby killing them off.

However, this should only be done when you have no fauna in your tank, or if the species would be able to tolerate blackouts for a few days.

Note: By increasing the light intensity/output, we can only encourage the fast growth of competitors— green algae, macroalgae, and seagrasses. These species tend to grow vigorously under intense lighting and they will displace and outcompete the brown algae for nutrients in the water column, hence dwindling their growth. However, it looks like we are just replacing it with another problem. 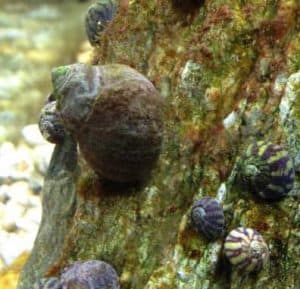 Another proven way of eliminating diatoms in a saltwater aquarium is to introduce species that will devour the slimy coats.

This option should be deployed as a last resort i.e. if the brown algae situation persists after trying other methods, consider adding the following algae eaters in your reef tank:

These algae-eaters will feast heavily on the brown algae films growing on your substrate and live rock, making sure that a huge percentage of their population (if not all) are eliminated after a few days.

The downside of using algae eaters to combat diatoms is that they may not be friendly to your soft corals, so make efforts to observe them closely while they do their work.

There are lots of positive feedbacks littered all over online reefkeeping forums concerning the use of chemical products in combating brown algae.

An example of such a product is Seachem Phosguard (link to check the price on Amazon), and it works perfectly— you simply need to add it in the right doses and the ugly blankets of brown algae will clear within a week.

Additionally, some of these phosphate-removing products have been designed to fit into the filtration system, so it’s up to you to choose the one that you fancy.

Note: There are also lots of positive feedbacks regarding Vibrant Marine (link to Amazon). You can read more about this product on reef2reef forum here.

Most times all that is needed during the outbreak of brown algae in a saltwater aquarium is to tackle the root cause/source and be patient; since they are almost harmless (if it is not a huge outbreak) and will fizzle out after a while.

Moreover, to prevent future occurrence of this unwanted visitor, you are required to

The presence of diatoms in your reef tank is only temporary. It will go away eventually, so you don’t have to lose sleep over it.