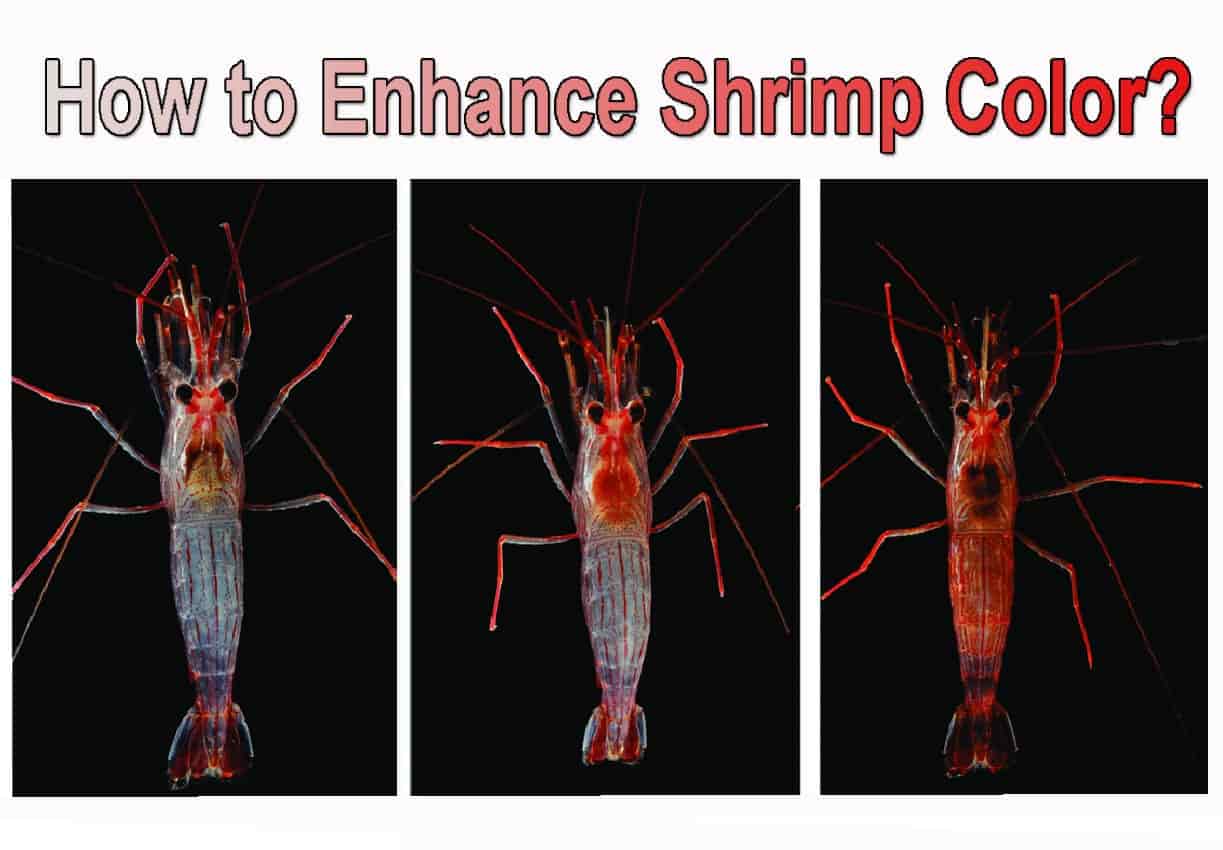 Dwarf shrimp’s color is one of the most important quality criteria and dictates its market price. In the shrimp keeping hobby, pale shrimp is not a competitive product. Therefore, a lot of aquarists ask these simple questions. How to enhance shrimp color? Can they improve the coloration at all? The answer is – Yes. It is possible.

The pigment of shrimp is dependent upon feed quality, water quality, and stress factors. Moreover, such environmental factors as a light regime, substrate, and background color also affect shrimp color.

In this article, I will refer to some biological studies about this matter. You will know facts about shrimp coloration and some more useful information about shrimp keeping hobby.

Without any further ado let’s get started.

In order to know how and why it is possible to enhance the shrimp’s color, we need to know more about shrimp pigmentation itself.

In shrimp, astaxanthins (a member of the carotenoid family) are the main pigments associated with external color. These chemical compounds (molecules) are responsible for the yellow, orange, and red colors in many shrimp, and when chemically bounded with proteins they may extend their reflection wavelength to blue, green, brown, black, or violet color.

Note: In addition, besides pigmentation, astaxanthins improve survival rate and serve several other functions in shrimp such as:

Interesting fact: According to the study, the pigmentation pattern is most pronounced in the anterior body parts (carapace) of the shrimp. Biologists found in all shrimp that the pigments in the carapace were larger and more dispersed than in the other regions.

Astaxanthin as pigments is important to shrimp and fish which are unable to synthesize pigments on their own and therefore have to rely on dietary supplements to achieve natural pigmentation.

Biologist investigated the effect of dietary on pigmentation and growth of Red cherry shrimp (Neocaridina davidi). After the 8 weeks feeding trial, the results indicated that Astaxanthin-fed groups had significantly greater pigmentation than that of shrimp fed without it.

Note #2: Astaxanthin is also a very powerful antioxidant that is added to many foods and supplements for fish, shrimp, and humans too.

So, now when we know what lies in the base of shrimp pigmentation. We can use it to our advantage. Color enhancing foods can be a really good tool to help improve the color of your shrimp. It is possible to buy a number of shrimp foods, which are intended to improve color. 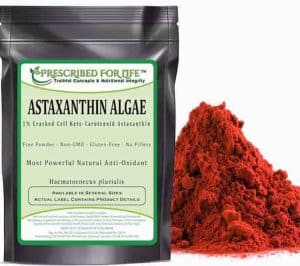 As I have already said, Astaxanthin (check the price on Amazon and here) is an important part of shrimp pigmentation. Nonetheless, I need to stress it out that it can enhance whatever natural color already exists. That is why do not expect any miracles. However, in some cases, these changes can look like ones, even when we are talking about the same genetics.

Tip: Do not add too much. Use a very small amount for your shrimp.

The recipe is called “Shrimp Kandy Feast” and all credits go to jayc and Michael Petro.

Note: buy only agar that has no other additives like sugar, flavoring, or coloring. 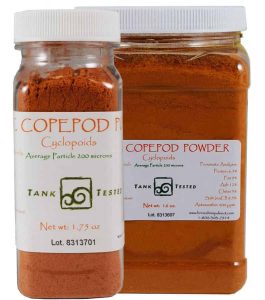 Arctic Copepods (link to check the price on Amazon) has incredibly high levels of carotenoids (astaxanthin, cryptoxanthin, echinenone) which will enhance the color in your shrimp. This is an amazing product.

TetraColor® (link to check the price) 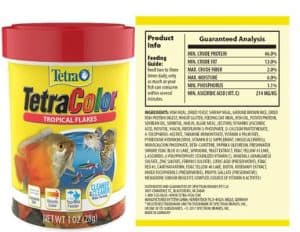 provides a sufficient amount of carotenoid pigments for the shrimp. Multiple studies reported an increase in Red Cherry shrimp body coloration with the inclusion of increasing amounts of carotenoids in shrimps’ diet. For example, the highest pigmentation tested was 200 mg/kg, whereas the carotenoid content of the commercial food used in this contribution was 382 mg/kg. 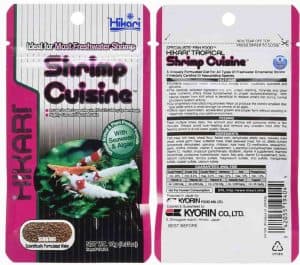 , Hikari Micro Wafers, and Hikari Tropical Crab Cuisine (links to check the price on Amazon) naturally offer higher levels of color enhancers, which help develop a true coloration. One of the main components of their food is astaxanthin. Balanced formulation offers necessary nutrients that promote proper shell development as well.

According to some results of the research, I quote “for pigment enhancement, blanched carrot, cucumber, dried grapes and mixture of commercial shrimp foods were administrated and results were encouraging”.

A long time ago shrimp keepers noticed that black substrate is very important to bring out intense coloration. At the same time, if you put them back to the tank with a white substrate, the color fades away.

It can sound strange but by doing so they try to camouflage from predators. In shrimp, camouflage is considered the primary function of adaptation to different habitats and background, rendering the animal cryptic to potential predators.

Of course, you can exclaim that they are red (yellow, blue, etc.) and shine like beacons for the fish! How can they hide?

The point is that shrimp do not understand it. For example, in the wild, Neocaridina has a pale-brown or muddy-brown color. Shrimp breeders took away this defense mechanism. They changed their colors to red, blue, yellow, etc. However, shrimp acts instinctively by enhancing whatever color they have.

Biologists noticed that the total carotenoids (astaxanthins) in shrimp kept in black and red gravels were higher than those in white gravel. In addition, the weight gain of the shrimp significantly increased as the darkness of background color increased. Actually, it may be related to the color that best mimics the natural environment of the species. 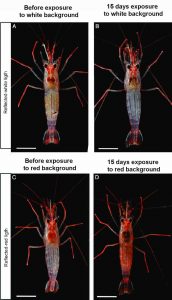 In another experiment, the 30 shrimp were assigned randomly to 10 tanks (10 L each) under light conditions provided by a 65W-fluorescent lamp daylight color (6500 K).

The results of that study demonstrate that shrimp coloration can be manipulated by changes in reflected-light. The red color of the background induced shrimp to show a more red-intense coloration compared to the white one.

This is a cheap and simple way to enhance shrimp coloration. Therefore, it could make sense to sacrifice some system units and customize it to hold specific shrimp species.

Note: Researchers supposed that the same end result could be obtained either by using red-emitting light or adding red filters to white lights.

Shrimp age is another aspect of body coloration. The point is that it will change with age. That is why do not judge too early and do not cull your shrimp until they are fully-grown (or at least when they are one month old). Shrimplets do not have an intense coloration as adult shrimp have. Color changes can continue for months! 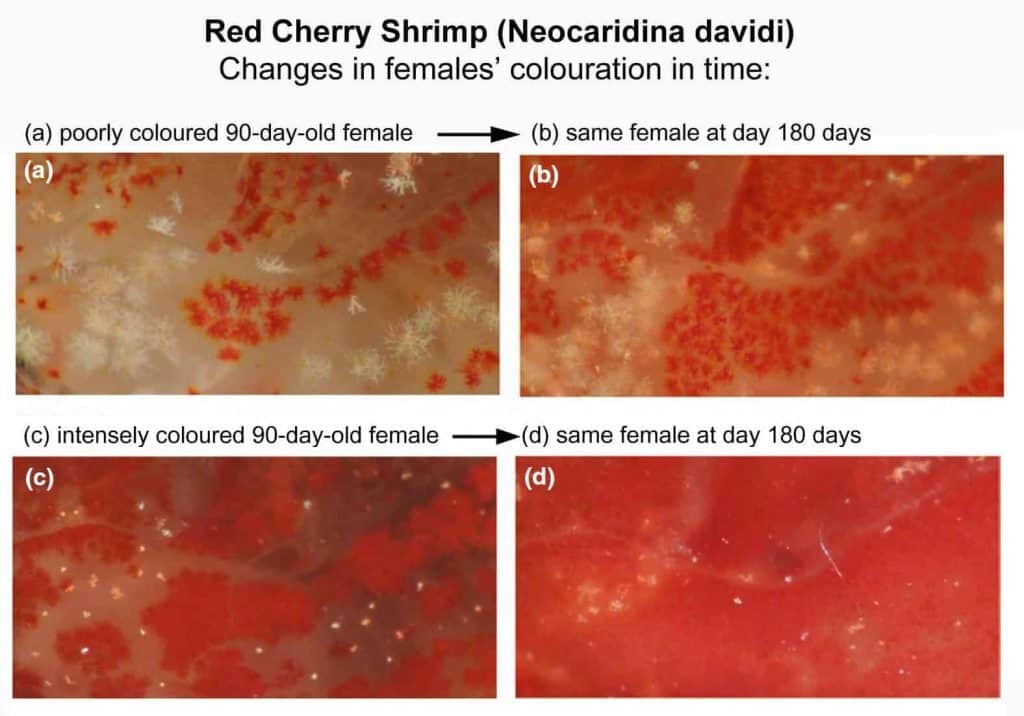 But what about males you can ask?

Stressed dwarf shrimp can temporarily lose their color. Actually, stress can cause legitimate and very devastating health concerns for your shrimp. Because when the shrimp is stressed over a prolonged period of time it can actually cause them to break down and have diseases and succumb to things that they would normally be able to fight off with their immune system.

That is why hiding places or caves in the aquarium can also affect the intensity of coloration that your shrimp is going to show. When shrimp feel secure in their environment they are going to have the best chance of developing a really intense beautiful coloration.

In addition, shrimp are very social. They will never develop their full-color intensity potential unless kept in groups where they can interact with other individuals of their species and feel safe.

The last one but not the least, any shrimp or fish will look nice and healthy when they are in their optimal care requirements. Therefore, pay attention to your water quality (PH, GH, KH, TDS, nitrate, copper, etc).

Intense color is the most desired feature for the shrimp hobby, defining its trade value. Color is a fundamental component of the price tag and poorly colored shrimp command a lower price, reducing competitiveness.

Although shrimp coloration is known to be affected by many factors. We can also influence and enhance it by following simple rules.

13 thoughts on “How to Enhance Shrimp Color?”