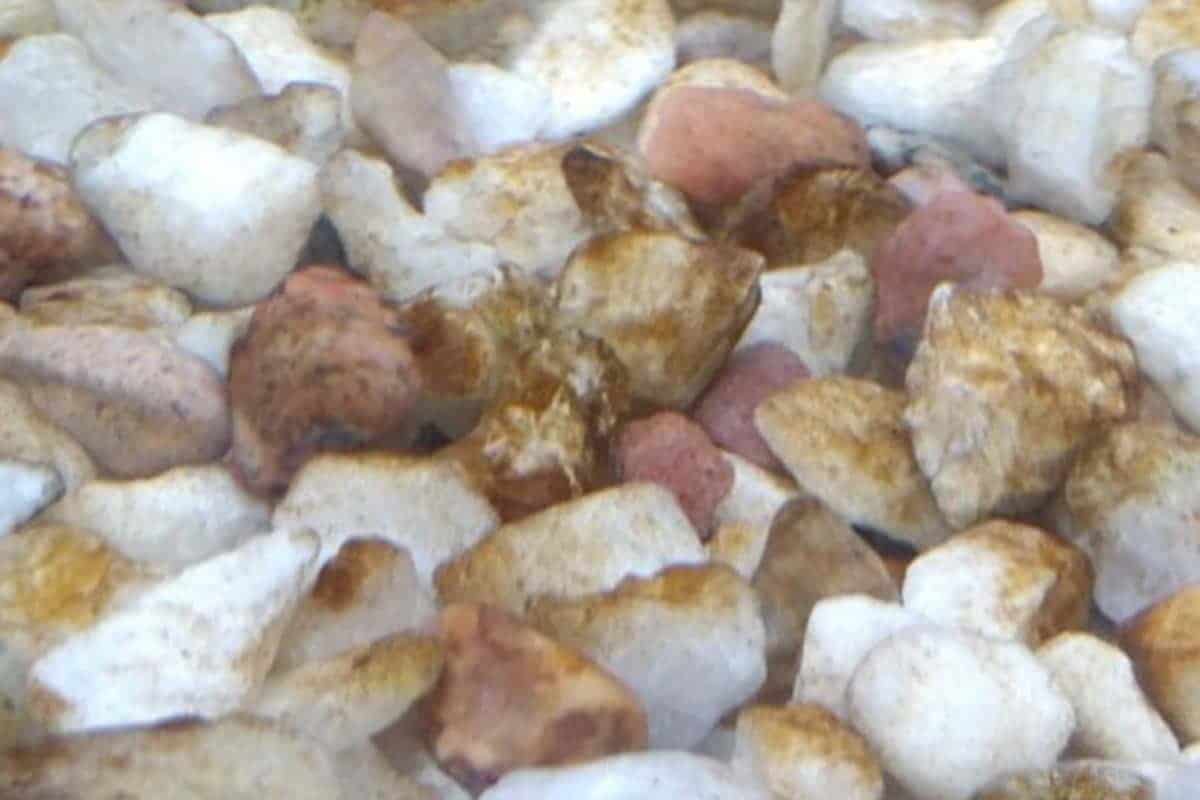 The brown algae (also called Diatoms) are one of the most common problems that many aquarists experience in their new tanks and/or, in some cases, even in already established freshwater tanks.

Luckily, these algae should not cause you any problems. Many experienced aquarists do not even worry about brown algae and leave them alone, so they just go away on their own.

Sure, these algae make the tank unpleasant and may inhibit visibility to some extent, but these are not reasons to panic and do all sorts of things to prevent it from occurring.

Keep reading to find out more about its causes, and effective ways to control and eradicate brown algae from your shrimp tanks.

1. What are Brown Algae (Diatoms)?

Actually, there is a lot of confusing and conflicting information about it on the internet.

In any case, obviously, it is not possible for ordinary hobbyists to find out what exact species of brown algae they may have in the tank.

All brown algae species have distinct ranges of pH, salinity, light, temperature, and other water parameters where they will grow and thrive. Thus, the potential mix of species is extremely variable.

Luckily, we do not need to know that anyway because the potential causes and treatments are the same.

1.1. Is there a difference between diatoms and brown algae? 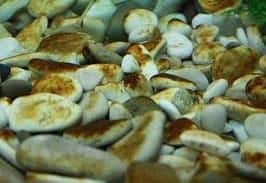 On the Internet, you can find many articles about brown algae in freshwater tanks. In some of these articles, you will see that their authors often mention that diatoms are not considered species of algae but some form of single-celled organisms or bacteria.

Developing this idea, many aquarists believe that this is the reason why regular algae treatments are not effective against brown algae with products aimed at “fixing” algae issues.

Well, technically, this is not true.

Diatoms are photosynthesizing single-celled algae. In science, there is no argument against it.

Note: Even though Diatoms are single-celled, they are generally found in groups that make them look brown.

Interesting fact: These algae are the only organism on the planet with cell walls composed of transparent, opaline silica.

2. How to Identify Brown Algae?

As its name suggests, the Brown algae can be easily identified in our tanks from their small, circular, brown spots. These numerous brown spots are flat and hard. In addition, they have a slimy feel. This can be also felt when you run your fingertips on its surface.

In science, though, the morphological identification of brown algae is based on the shape and structure of the valves and requires a light microscopic examination.

3. Are Brown Algae Dangerous to Shrimp, Fish, and Plants?

No, brown algae will not harm your shrimp, fish, and other animal species in your tank directly because diatoms are not toxic or poisonous. 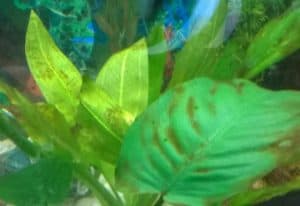 However, if the contamination starts getting really bad it may have some negative effects anyway, for example:

If you have discovered diatoms in your tank and are searching for preventative measures – you may be wondering what causes brown algae and how diatoms get into the tank in the first place.

Actually, these algae feed off silicates, nitrates, and phosphates in the water column, the abundance of these compounds in your tank will make them grow rapidly.

In the presence of sufficient nutrients and light, an assemblage of diatoms doubles almost every 24 hours through binary fission.

The presence of high amounts of silicates in your tank will definitely cause the diatom bloom. This is because diatoms use up silicates in the tank water to build up their shells.

We get silicates in our tanks mostly through our tap water, sand, and stones.

Excess of nitrates in the water can also boost the growth rate and spread of diatoms in the tank.

According to the study, the ratio of carbon:nitrogen:silicon:phosphorus in diatom cells averages 106:15:16:1. Thus, diatoms require about the same amounts of nitrogen and silicon for growth.

Phosphorus is transformed into orthophosphate and is available for use by all sorts of algae (not just brown algae) and other aquatic plants for growth.

Note: Keep in mind that high phosphates can only contribute to the proliferation of brown algae in the tank. They are not the main reason for that.

New tank setups. It is not a secret that almost all newly set up tanks go through the brown algae stage (the ugly stage). This is absolutely normal. At this stage (cycling stage), new setups do not have a lot of beneficial bacteria to absorb and transform nitrogen.

As a result, brown algae (diatoms) benefit from decreased competition for resources and thrive in our tanks.

Old tank setups. Brown algae do not appear out of nothing. You have to retrace all your steps. Have you changed something (stirred up the substrate, added new fertilizer, used new fish/shrimp food, etc.)? It can also be that you have not done proper maintenance for way too long (for example, your substrate or filter might require a deep clean).

A sudden change in water quality (because of a break somewhere in your city) or seasonal changes can also lead to brown algae bloom.

In general, when the tank is not balanced and the water quality are fluctuating, you may have brown algae.

5. How Long Can Brown Diatom Outbreak Last in a Freshwater Tank? 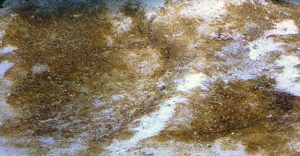 If we are talking about new tank setups, it can last until your tank is completely cycled and developed a balanced eco-system. Generally, it ranges from 4 – 6 weeks. Once nutrients are used up the problem will resolve itself.

If we are talking about matured tank setups, well, it can last anything from a few weeks to a few months. Why? Because everything depends on the abundance of nutrients in your water!

As long as Brown algae have enough food, they will grow.

Note: When Brown diatom algae start to die off the color will fade from it.

6. How to Remove Brown Algae in Shrimp Tanks

I need to start off by saying that, generally, it is about finding a balance in the tank. Therefore, you have two main options here:

The presence of silicates in freshwater tanks is, probably, the main reason for the brown algae.  Diatoms have a particular need for silicates and are incredibly efficient at extracting them from the water.

Note: Once the silica concentration drops, other types of algae and microorganisms, that do not require silicon, generally replace brown algae as the predominant form. Do not worry, this is also natural.

It is common knowledge that local tap waters often contain silicates because of the dissolution of silicate minerals with which they come in contact.

So, to avoid/remove silicates we can use RO or distilled water in our shrimp tanks.

Invest in a RO/DI unit to filter the water through a membrane filter cartridge, thus removing silicates and other impurities that promote diatom growth. Of course, it is possible to buy bottles of RO water but in the long run, it will be too costly.

This method is a proven way of eliminating diatoms as soon as they show up. It involves removing the brown algae from surfaces by scrubbing or scraping them off using special tools.

Here are some examples (links to Amazon to check the price):

Gently scrape the tank walls and decor till you completely eliminate all visible traces of brown algae. Do it very carefully, you do not want these ‘particles’ to float around in the water column and/or clog the aquarium filter.

If there are algae coats on the substrate, make sure to scoop or siphon them away together with the detritus.

Note: Be careful, if you have an acrylic tank. You need to use tools and special blades that will not be able to scratch the glass of your tank.

If the diatoms get onto the decor, an old toothbrush will do just fine, there’s no real need for the bleach.

Regular water changes are one of the sure ways to minimize the proliferation of brown algae.

By doing water changes, we prevent the build-up of excess nutrients (silicates, nitrates, and phosphates) that encourage brown algae blooms.

Generally, a 20 – 30% weekly water change should be enough to keep the water free of excess inorganic compounds. However, in case of severe brown algae outbreaks, one can replace up to 50% of the tank water.

Another way of controlling brown algae in a freshwater tank is to introduce species that can devour the slimy coats.

Although, this method is highly recommended by many aquarists, personally, this option should be avoided. Why?

Nonetheless, if you still thinking of adding a clean-up crew, here is a list of the most popular brown algae eaters for freshwater tanks: 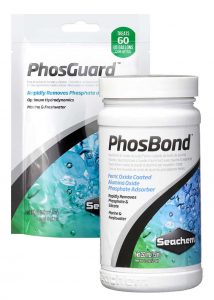 Many of these products are advertised as fish and invertebrates safe. Nonetheless, the use of chemical substances to cure brown algae should be a last resort.

The reason is that we can’t control all potential effects of chemicals on the overall health of the aquarium.

For example, reducing phosphates to 0 will be a huge mistake and definitely lead to nutrient deficiencies in aquatic plants. If plants do not grow, they do not absorb nitrogen from the water. As a result, ammonia or nitrate spikes can kill your animals.

Most popular phosphate and silicate removing products (links to check the price on Amazon):

Will CO2 help against brown algae?

Generally, yes. This process will not eliminate algae on the spot, but will gradually inhibit its growth until it eventually ceases to exist.

Increasing the CO2 level will also promote the growth of plants, which in turn reduces the nutrients available in the tank for algae growth. As a result, plants absorb nutrients much more efficiently, and, eventually, they can outcompete brown algae.

You can boost CO2 levels in two main ways:

Will turning off the lighting help against brown algae?

Yes. Diatoms are photosynthetic. Darkening the tank is one of the easiest ways to get rid of brown algae. Without light, diatoms will die off.

This method is great for cycling tanks without animals and plants (the Dark start method). However, blackout is not recommended for cycled tanks. It can harm plants and stress your pets.

Can We Use UV Sterilizers Against Brown Algae?

No, UV sterilizers are relatively useless against brown algae.

The problem is that all UV sterilizers are effective only against free-floating bacteria, algae, and other microorganisms that pass over the bulb.

Although, UV will kill some free-floating diatoms, once they attach to objects, they will have more than enough space to reproduce without going anywhere near the UV.

Diatoms (brown algae) are very common in cycling tanks. Luckily, these algae are not in any way difficult to curb. It will generally go away on its own once the tank stabilizes (you have nitrogen balance). This is absolutely normal.

Brown algae are easily preventable but if these algae are already blooming in your old tank, we can effectively control this problem by denying them the essential nutrients they require for growth and survival (silicates and phosphates).