How to tell the difference between a male and a female crab? This question is especially important for biologists and pet owners, the need to know their crab’s gender is critical for breeding and understanding many behaviors.

Luckily, determining a crab’s gender is not very complicated, all we have to do is to look at the structure of its abdomen flap.

Of course, there can be other traits unique to each crab species that will also help you differentiate crab gender such as size, coloration, claws, etc. Nonetheless, many of these characteristics are only present in mature adults and/or belong to a particular crab species.

Keep reading to learn what characteristics will help you determine crab gender as a general rule, as well as some other traits you can find in some other crab species.

Even though the number of segments in male and female abdomens is the same in any species, there is sexual dimorphism in regard to abdomen shape and, in some cases, segmental fusion.

Their abdomen is bigger, highly domed, and modified into a brood pouch. This area is also known as the undercarriage.

Unlike males, females invest a significant amount of energy in abdominal growth, since this body part is basically an incubating chamber for eggs and newly hatched young. The eggs are completely protected when the abdomen is closed.

In some species (for example such as Scylla spp.), the abdominal flap of the female also becomes significantly darker once they have reached maturity.

According to the study, most crab species are sexually dimorphic and their gender can be determined externally.

If we gently pull the abdomen back, away from the underside, it will show you the crab’s reproductive organs.

Males always have only two pairs of gonopods (uniramous swimmerets or pleopods) which are specially modified for copulation. Both gonopods can be of various lengths. At the junction of the two segments, there is usually a small flap that can be cup-like.

3. Size and Color of Claws 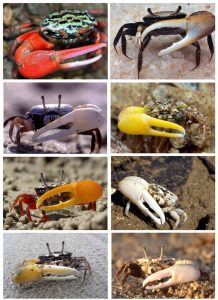 In some crab species, this can be a good way to distinguish between males and females as well.

Generally, dimorphism is often confirmed with the claws of adult male crabs reaching larger sizes (wider and longer) than those of females with a similar carapace length.

Unlike females, males often start investing more energy in growing the claws. Their claws are generally used in fights, courtship, mating, defense, and protection of females during copulation. As a result of sexual selection, females are more likely to choose males with large claws.

For example, males of the Fiddler crabs (genus Uca) are classic examples of how intense sexual selection by females can produce exaggerated male traits. Males are lopsided. They have one greatly enlarged claw and one small claw while the females have two small claws.

In most crab species, adult males are on average larger than females. This pattern is also related to the investment in reproduction over growth by females.

At the same time, we have to keep in mind that there is variation around the average size of each sex. Age is related to their length as well. Therefore, for many species, there is considerable overlap between male and female sizes.

Another problem is that some crab species can be so small (for example Thai Micro crab,
Red Apple Crab, etc.) that you will need special tools to tell the difference. In all other cases, it will not be possible to see the difference for the untrained eye. Basically, this method of sexing crabs, it can be done only for large species.

Another problem is that male crabs often grow faster than females.

Therefore, body size on its own is often not a good way to determine the sex of adult crabs. We should not rely on this trait alone.

Many species of crabs exhibit sexual dichromatism, in which males and females have different colors. In this case, male crabs are more colorful or ornamented than females.

Sexual selection can be divided into two main categories:

Females tend to have dull colors. It helps them to avoid predation and reproduce at a better rate because they are less visible to predators.

In males, colors can provide a warning to potential competitors or aid individuals in recognizing members of their own species.

Nonetheless, this trait is not foolproof, of course, because coloration may also depend on the specific period of the crab’s life. For example, when crabs are about to molt they become roughly the same color (dimmer and duller).

Generally, during mating, the male will flip over the female and wrap his claws and legs around the female.

They face each other, with the male crab on top and holding the female below him using his walking legs.

During this time, the female opens up her abdomen, exposing her gonopores to allow the insertion of the male’s gonopods and the transfer of semen.

The main problem though is that crabs are pretty aggressive animals and to the untrained eye, might appear like they are fighting not mating.

In crabs, males are generally more aggressive than females. Males often chase away intruders or actively engage in fights against other males.

However, it does not mean that females are peaceful either, they are simple slightly less aggressive.

In any case, multiple crabs should be kept only in groups of one male with multiple females. That is why it is important to know their gender.

Choosing an appropriate name for the crabs is not the only reason to know their gender.  Gender differences will help us to be better prepared for what we can expect from them in terms of behavior and breeding.

General size, claws dimorphism, behavior, coloration, etc. cannot and should not be used alone as a reliable way to sex crabs. In some species, these traits can be a good indication but they are not always correct. That is why it is advisable to use them only in combination with each other.

There are only two ways, which can give us an absolutely correct way to distinguish the gender of the crabs – the presence of gonopods and abdomen shape. Females have a much broader abdominal flap than males.