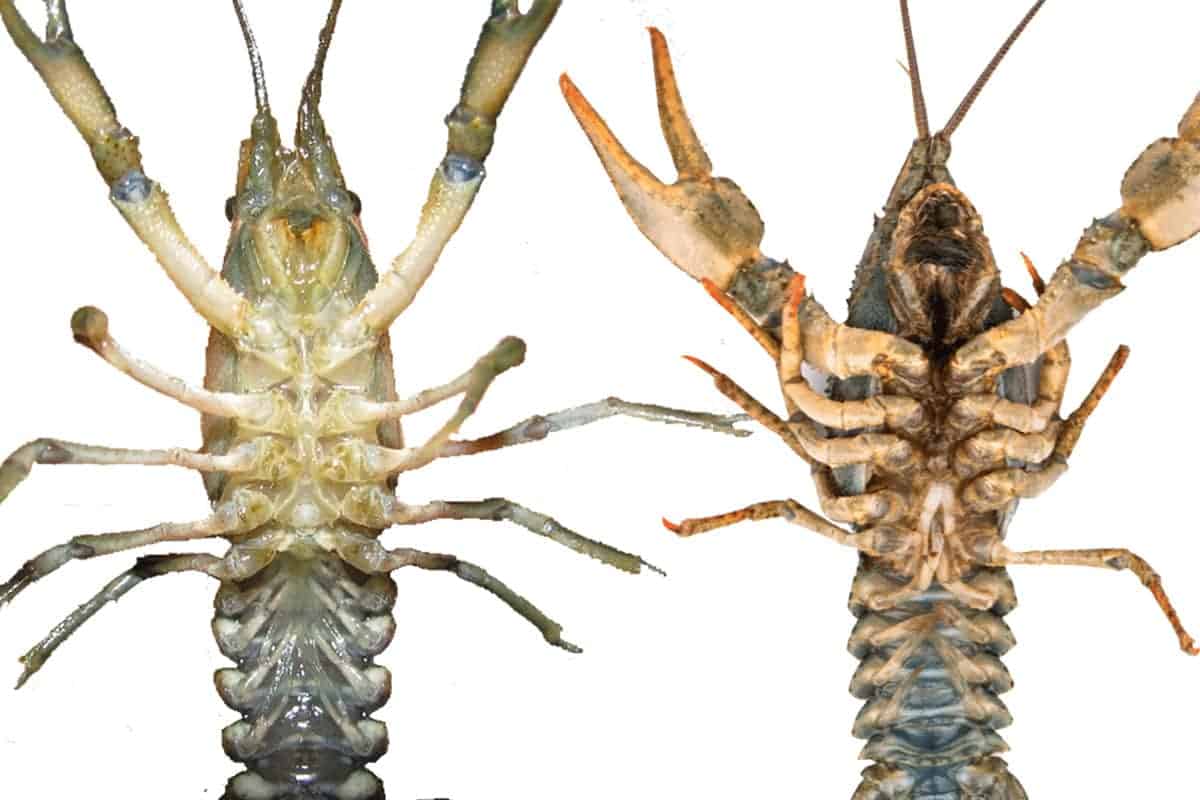 How do we tell the difference between a male and female crayfish? And does it really matter? Well, it surely does! For crayfish owners, the need to know their crayfish’ gender is critical for breeding and understanding many behaviors.

Actually, it is fairly easy to differentiate between male and female crayfish, all we have to do is to look at the underside (reproductive organs).

In some species, there can be other pointers as well such as size, coloration, claws, etc. However, many of these traits are only present in mature adults and belong to a particular species.

Important: the juvenile stage can be defined as a pre‐reproductive stage. Until then it is almost impossible to differentiate males from females with the naked eye.

In this article, I will show you illustrated differences between a male and female crayfish as well as some other traits you can find in some other species.

Interesting fact: In nature, to identify the gender, males usually rely on olfaction whereas females require the combination of olfaction and vision to do so. Crayfish have been shown to be mediated through chemical senses (sensory hairs or setae) that are typically located on their whiskers.

With one exception, all crayfish species are sexually dimorphic and their gender can be determined externally.

So, if you see that there is a triangular-ish forming of small legs (L-shaped appendages). That will indicate a male.

Females have seminal receptacles and lack the extra pleopods found behind the walking legs on males.

In most crayfish species, adult females are on average smaller than males. Age is related to their length.

At the same time, we have to keep in mind that there is variation around the average size of each sex. Therefore, for many species there is considerable overlap between male and female size.

Another problem is that some crayfish species can be so small (Cambarellus sp. or dwarf crayfish) that even fully grown individuals will not have enough size to tell the difference.

For example, one of the most popular pet crayfish, Mexican dwarf orange crayfish can grow only up to 2 inches (5 cm). Cambarellus diminutus (the smallest crayfish in the world) rarely reach even 1 inch (2.5 cm).

Therefore, body size on its own is often not a good way to determine the sex of adult crayfish. It can be done only for large species such as Cherax destructor, Blue crayfish, Procarambus Clarkii, Cherax pulcher, Red claw crayfish, etc. 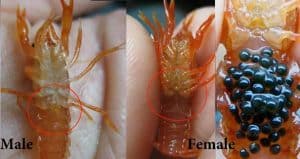 Females tend to have bigger and rounder underbelly (abdomen). This area is also known as the undercarriage. This is nature’s way of adding an extra measure of protection for the developing eggs.

Males have a narrow and slimmer plate. It has a more-like triangular or straight shape. Males do not need the extra space underneath to store their eggs.

The females have slightly rounder back than the males but only well-trained eyes can clearly see the difference.

The curvature of the undercarriage of the crayfish cannot guarantee gender.  You need to have well-trained eyes to clearly see the difference.

4. Size and Color of Claws

This is another way to distinguish between males and females. However, do not rely on this trait alone as well. But with some crayfish species, it can work.

For example, males of the Red claw crayfish have a red-colored patch on the outer margin of the claw (a trait of males), hence the common name.

Generally, dimorphism is often confirmed with the claws of adult male crayfish reaching larger sizes (wider and longer) than those of females with a similar carapace length.

Male crayfish are sometimes brighter than females. But not always.

In addition, when crayfish are about to molt they become roughly the same color (dimmer and duller). 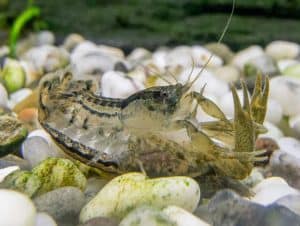 Generally, during mating, the male will flip over the female and clamp her claws to hold her on the back.

The main problem though is that crayfish are pretty aggressive animals and to the untrained eye, might appear like fighting not mating.

There are also some exceptions. For example, in Red claw crayfish, males arch the abdomen and rollover backward on their dorsal side to assume the position beneath the female.

Males are often more aggressive than females. Males often chase away intruders or actively engage in fights against other males.

However, it does not mean that females are peaceful either, they are simple slightly less aggressive.

In any case, multiple crayfish should be kept only in groups of one male with multiple females. That is why it is important to know their gender.

Aside from choosing an appropriate name for your pet crayfish, you need to know their gender so that you will be better prepared for what you can expect from them.

Abdomen shape, general size, coloration, etc. cannot and should not be used alone as a reliable way to sex crayfish. These traits can be a good indication but they are not 100% correct. That is why it is advisable to use them only in combination with each other.

There is only one way, which can give us an absolutely correct way to distinguish the gender of the crayfish – the presence of seminal receptacles and special appendages in males.