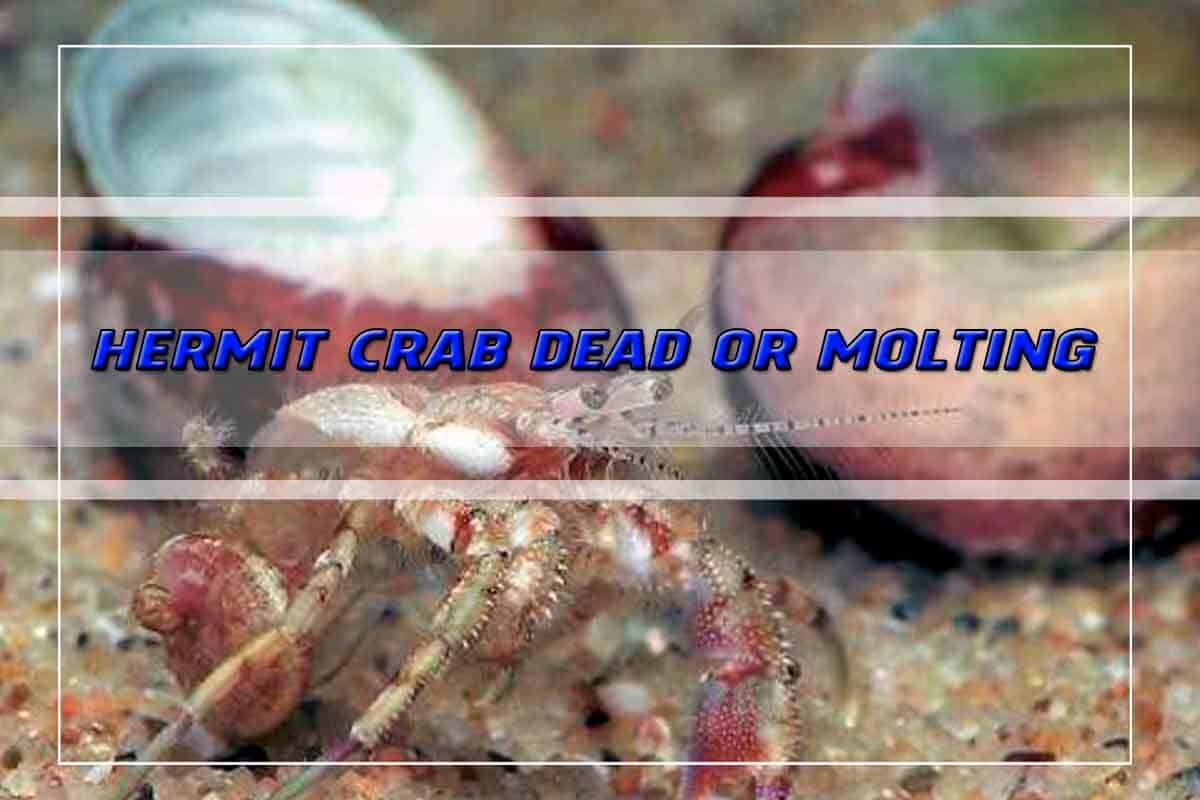 Molting is a dangerous undertaking for hermit crabs and most other invertebrates. According to the statistics, in nature, almost 90 % of their deaths are related to unsuccessful molting. To make it even worse, sometimes people get confused and unable to tell if your hermit crab is molting or dead, and simply get rid of them!

So, how to tell if your hermit crab is dead? To put it in a nutshell, dead crabs smell awful, especially after a few days. They fall out of their shells and do not have a normal color.

In this article, you will find out the difference between dead and molting hermit crabs. As well as, other ways to recognize the current situation of your crab.

Hermit crab molting is a process by which the crab grows. This involves the shedding of the old exoskeleton and hardening of the new one. The crabs are vulnerable during the molting period, therefore they tend to bury themselves underground for protection.  They are very inactive during this time.

It can be very difficult to tell if the crab is dead or surface molting. This is because when a hermit crab dies it usually presents a similar scenario. Actually, we can say the same thing about underground molting. The difference is that we do not see it.

During the initial stages of molting, the pincer becomes semi-paralyzed as it is preparing to pull out of the old exoskeleton. The gland on the base of the crab’s antenna gives it the ability to stand, walk and balance. However, during the initial stages of exoskeleton shedding, the crab may lose balance and lose the ability to walk or even stand up straight. The crab is stiff, can barely move and is also shedding its exoskeleton.

Now you can see why the molting process could be easily confused with the death of the crab. These two instances could be harder to distinguish if you’re a new hermit crab owner. A lot of owners have tossed out their molting crabs as they misunderstood it to be dead.

Now, as a hermit crab owner, I would also strongly advise you to read my article “Everything About Hermit Crab Molting”. It will give you a better understanding of the molting process as it can determine life and death of your pet.

Prior to molting, you might notice your crab becoming more and more anti-social and will begin to isolate itself from the other crabs. You will notice a clear decline in their interest in other crabs as well as feeding. This decline in activity levels will last until they are done with the entire molting process.

Let’s look at a few distinguishable positions your crab can take up during the molting process.

A molting crab will often lie on its side with dull, cloudy eyes and a chalky looking exoskeleton. In this position, you’ll also notice their body is mostly out of the shell, with only their tail tip still within its shell. Its antenna would be tucked in a downward position under the eyestalks. The legs will be slightly curled and will appear paralyzed. You will notice that the crab seems dead as it appears lifeless. However, if you watch close and long enough, you will notice slight jerky movements as it tries to wear out of its old exoskeleton into the new. The gill area is another body part you must pay close attention too. There will be an occasional movement here too as they will be still breathing while molting.

Another molting crab position is of the “Hunched hermit crab”. Instead of lying back straight, or on its side; they’re in an upright position inside the shell. Apart from the crab’s body position, other noticeable details remain the same such as fluid excretion and breathing movements at the gill. They will still appear lifeless and dead.

Rarely, you will also notice your crab molting in a sitting up position inside its shell. The shell opening is facing outwards, with the crab’s head, legs, and pincers hanging out of the shell. The other details are similar as mentioned in the first position.

A crab’s molting position is not strictly jotted down, you might sometimes experience a position that’s completely different from anything explained above. One of the crab owner’s has reported the molting of its crab in an upside down position. Unusual, but possible. He explained the process, and all he could see was her legs partially out of the shell and the brown, bubble-like discharge as it molted.

The easiest way to identify a dead hermit crab is the smell it releases as it decomposes. If your hermit crab has actually died, you will begin to notice a rotten, fishy, salty smell around it. To be completely sure, bring the crab closer to get a good whiff.

A crab might bury itself during molting process, however, if it stays in the same buried position for more than a few weeks, you know something is wrong and it might actually be dead (however the smell is the key, as a molting crab could keep itself buried for about 3 months).

Tip: Do not forget to leave food when your hermit crab is molting. They can come up from the molt during night time, eat and hide again. Give them something that is rich in calcium, like Cuttlefish bones (link to check the price on Amazon), etc. They definitely need calcium after the molt.

In a molting crab you will notice a white exoskeleton. But if your hermit crab appears to be gray in color, it could be a sign that it’s dead. To confirm, check for smell or movement.

Your last resort at checking the death of the hermit crab could be to use the “shaking method”. A molting crab will be stuck to its shell. Whereas, a dead hermit crab will be rigid and loose. So if you shake the shell and the crab falls out easy, it’s a pretty good sign that your hermit crab is dead.

However, I would still recommend to smell your hermit crab. The point is that sometimes they can become very stressed, weak and sick. As a result hermit crabs cannot hold on the shells or leave it voluntarily. Of course, this is not a good sign and if it is your case, you can read about it here.

In most cases, loss of legs in hermit crabs may be a result of stress caused by various factors, including tank conditions, fighting, and etc. Its condition can get better if you address the issues that caused the stress.

Hermit Crabs can autotomize (drop) and regenerate (regrow) their lost limbs. But if it is losing more than one leg or claw in a 24 hour period, this can mean it is in big trouble.

Hermit crabs are one of the most unusual pets to own, but they’re also amongst the most interesting and fun; if treated right. They’re inquisitive, caring in nature and make great pets for adults and the young ones too. Hermit crabs are small and adorable, however, they do require a good amount of care, maintenance, and knowledge so you will not confuse a molting hermit crab with a dead one.

Always keep in mind that, they are wild animals and need to be kept in a suitable environment that is as closest as it can be to their natural habitat. Only by doing so you will avoid mistakes so your Hermit crabs can thrive in their crabitats.

32 thoughts on “Is Hermit Crab Dead or Molting?”