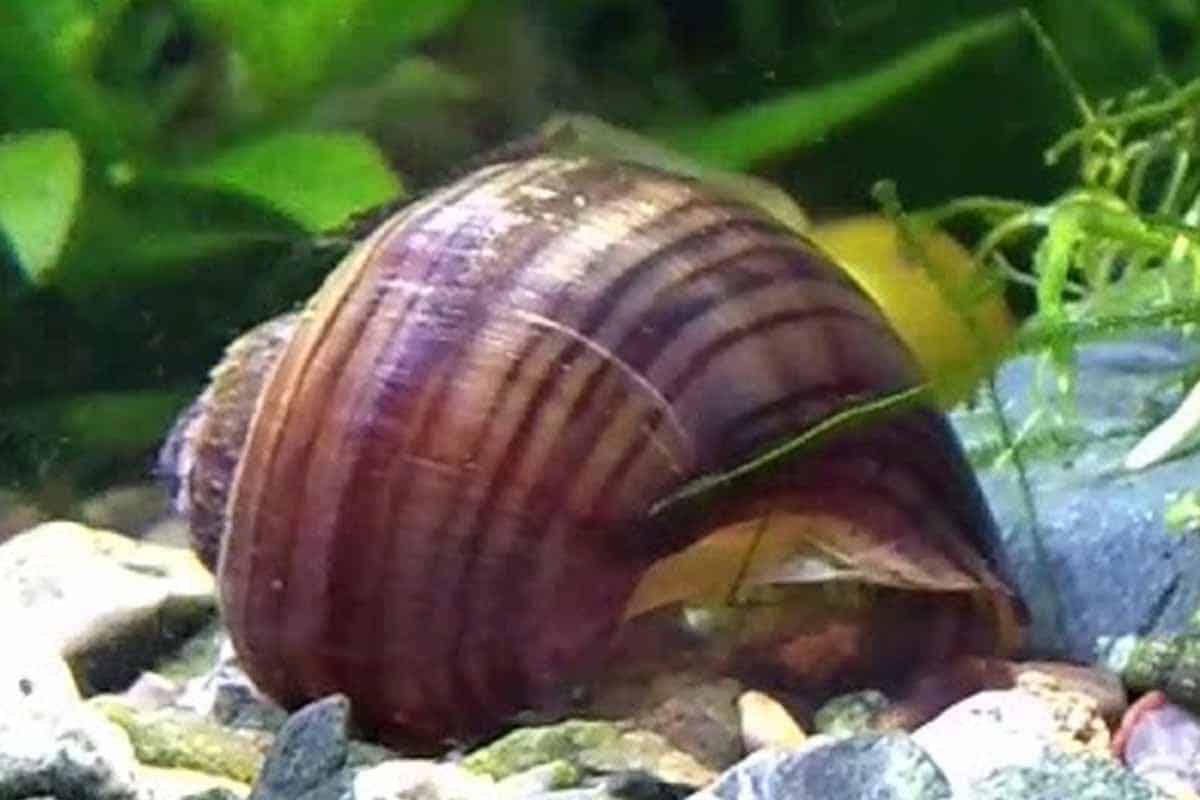 Is my snail alive or dead? This question is often asked in popular fish and aquarium forums by hobbyists that are quite perplexed about the status of their snails.

There are several ways to find out if the snail is dead or alive. So, if the snail does not respond to touches; it is inactive, smells, and cannot hold the trapdoor – it is dead.

Is my Snail Sleeping or Dead?

A snail’s inactivity for extended periods could make you wonder if it is just normally resting in the tank or completely dead.

Whichever the case may be, here are some pointers that will help you ascertain the condition of your snail so that you can act accordingly:

As soon as snails are tapped on their hard shells or moved from a particular position, they will respond swiftly by retracting their fleshy body into their shell.

With that in mind, if you do observe that your snail has been in the same spot for a long while without any noticeable activity or movements, you may tap on its body two or three times to see if it will move.

If it is alive, it may withdraw the antennae, and slowly retract its body into the shell.

Another thing to look out for is the foot, this is the snail’s means of locomotion. This muscular organ is capable of expanding and contracting.

The foot also has a gland that secretes mucus. This mucus serves as a lubricant and glue for attachment to surfaces. Most times the snail will attach/stick firmly to the tank glass, substrate, and ornaments in the tank.

If after due inspection, you notice that your snail’s foot is attached to surfaces in the tank, then there should be no cause for alarm, it’s safe to say that it is alive.

However, if the whole body is freely hanging out of the shell and not even responding to touch, the snail is likely dead.

Moreover, you may also see the snail floating on the surface of the tank. Some snail species can be buoyant due to excess air trapped in their body.

This is a common snail behavior by the way, although some hobbyists may mistake it for the snail being dead.

If in doubt, you can take the snail out of the water for a few seconds to see if it responds positively by moving the antennae and withdrawing into the shell.

4.     The snail is inactive for several days. Smell test.

Additionally, a snail can be inactive for some days, be it 2-3 days. This period of inactivity is actually a sleep cycle, during this time the snail can stay in a particular spot without moving or attaching to surfaces.

The sleeping pattern of snail is quite different from that of other organisms. On average, most snails sleep for over 13 hours in seven bouts until their next sleep cycle.

A sleeping snail may look like a dead snail, so instead of assuming the worst immediately, you may want to take it out of the water to perform a simple smell test.

A dead snail smells awful (like rotten eggs), you will not confuse this scent with anything else.

So if the snail does not have a foul odor, then it is probably alive, you can confirm further by tapping on its body a few times to see if there are any movements.

5.     Response to the change in environment.

Furthermore, if after several tries and the snail does not respond to your pokes, you can transfer it into a clean bowl of freshwater.

Normally, the snail should become active after a change in the environment, but if it doesn’t respond then it’s probably dead.

Alternatively, you can also try a light test. It involves holding the snail against a lamp bulb.

This allows you to see through the shell, and if the inside of the snail has shrunk within the shell, then it is no longer alive.

Lastly, you can ascertain the status of your snail by taking a glance at its trapdoor.

Although not all snails have this structure, the trapdoor will remain closed while the snail is alive but if it is open, then it is possible that the snail is dead.

Freshwater snails that do not have trapdoors (operculum):

In some cases the trapdoor can be completely closed for several days in a row, however, there is no smell to indicate it may have died. What should we do?

First of all, check your water parameters and temperature. For example, if the temperature drops below the comfort range, the snails can hibernate.

Second, take a look at its tank mates. The snail can be bullied or annoyed by fish or even shrimp. For example, dwarf shrimp can annoy them by constantly grooming and picking up mucus.

Third, check out the diet. Is there food available? Some snail species do not eat anything but algae (for example, Nerite snails). So, if there is nothing to eat they will starve, get weak, and die eventually.

There are many reasons why snails die. Among them:

What Happens When a Snail Dies?

When a snail dies it ceases to be active and its muscular body decomposes. A dead snail will emit an odor that is extremely foul and repugnant, it is properly one of the worst smell one can possibly come across.

Yeah, it is that terrible!

This bad odor is due to the presence of ammonia and it will only get stronger as time goes on. A  dead snail will release huge amounts of ammonia in the tank as it decomposes, and this is harmful to the tank inhabitants which include snails, shrimp, crabs, crayfish, and fish.

The body of the snail will hang out freely from the shell when it’s dead, but it won’t detach.

What to do with a Dead Snail

The proper thing to do when you discover a dead snail is to remove it from the tank. As mentioned earlier, the death of an aquarium snail will result in the decomposition and release of ammonia in the tank which will pollute the tank water.

Personally, I would also recommend testing your water parameters. Be prepared to do a water change and clean up the tank if it is necessary.

The tank water should be changed to eliminate traces of ammonia, disease-causing organisms, and also to prevent algae problems that may arise due to poor water conditions.

How to Properly Dispose of a Dead Snail

Knowing how to dispose of a dead animal is essential, you need to make sure that it is executed in a right and proper manner.

The best way is to scoop out the dead snail with a fishnet, place it inside a sealed plastic bag, and then in a trash bag for garbage collection. You may as well freeze it prior to pick up day.

Basic Caring for Your Freshwater Snail in an Aquarium

In order to avert untimely death of your aquarium snail and ensure that they are always in a good health condition. Do your best to maintain good water quality and stable parameters, and provide healthy diets that are high in calcium.

Snails need to be fed appropriately with meals that are rich in calcium because they need lots of it to build and maintain strong shells.

Suitable meals include blanched cabbages, carrots, spinach, kale, and zucchini. Another great food option is the cuttlebone. Since snails are known to be slow-eaters, you should be mindful of how you feed them.

Leftovers should be removed the following day, bearing in mind that less of that diet is required next time.

Snails do enjoy roaming about on the bottom of an aquarium, therefore a tank with more surface area than depth would be ideal.

Depending on the species and quantity, many snail species can be kept in a 5-gallon tank (20 liters), however, large tanks are more advantageous.

Maintaining stable water parameters at the appropriate ranges/values will go a long way in ensuring that your snails are healthy and stress-free.

Always monitor the parameters and avoid rapid changes in water conditions because it could stress them out, and try as much as possible to maintain ammonia and nitrites at the lowest levels.

Be sure to dechlorinate the water to eliminate traces of copper and other heavy metals, and also acclimate your snails before adding them into the tank to minimize shock that could result in their death.

Avoid the use of medications or fertilizers that contain copper in the tank because snails are very sensitive to it.

It would be a wise decision to confirm if the snail is really dead before getting rid of it.

Regardless of the signs of inactivity, it may exhibit, you should make efforts to verify if it is still alive or dead through a simple smell test or using other methods outlined earlier in this article.

After due confirmation of its demise, then you can actually proceed to dispose of it properly.

3 thoughts on “Is My Snail Alive or Dead?”