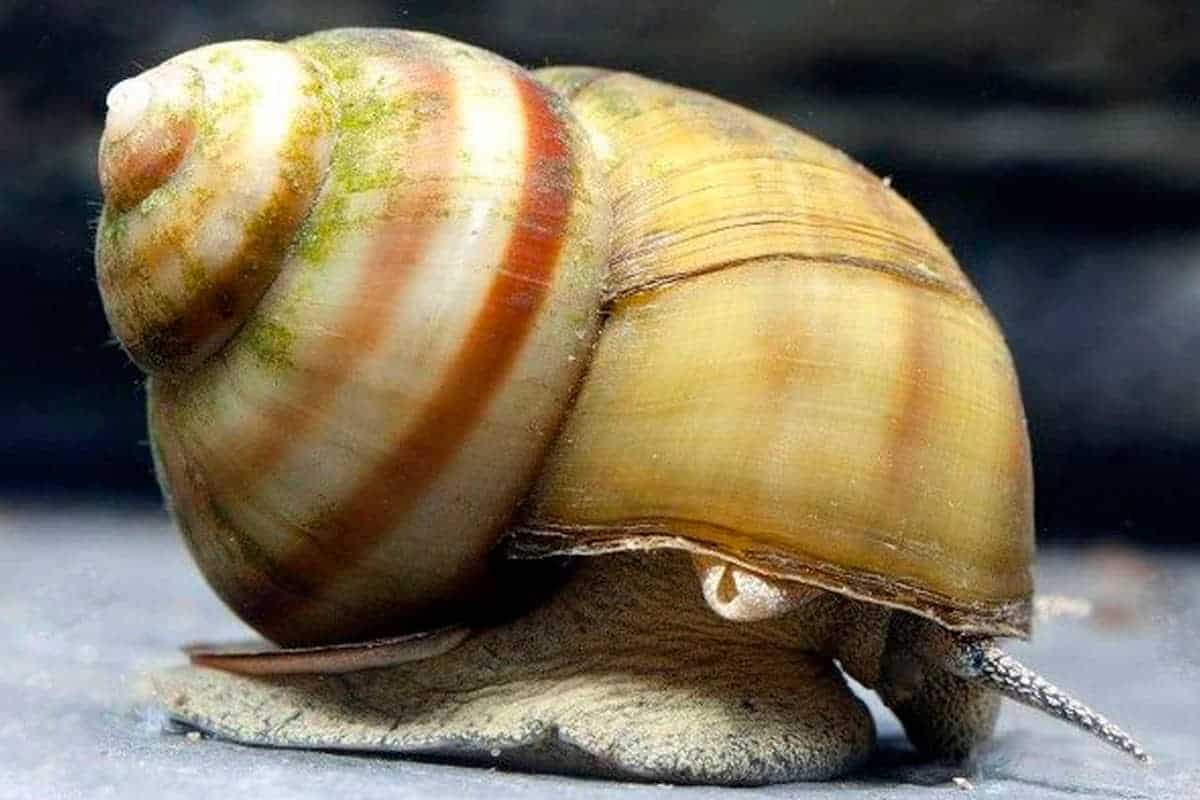 Japanese trapdoor snails (Viviparus sp.) are one of the most beautiful snails in the aquarium hobby. Therefore, if you are thinking about putting together a proper fish, shrimp (huge guide) or community tank, they should be an option for you to consider. Since I like these little guys, I figured that it might be helpful to make you a quick guide on how to manage them.

Japanese trapdoor snails grow quite large and prefer cool water. These snails fall into the category called viviparous, which means giving birth to living offspring that develop within the mother’s body.

Besides their beautiful ornamental looking shells, they don’t eat live healthy plants. It makes them a popular choice for both ponds and indoor aquariums as scavengers and algae-eaters.

These snails originate in Japan, however, nowadays are found in all East Asia and North America.

They prefer stagnant or slow-moving bodies of water with a soft, loamy, muddy substrate where the bottom is covered with a thick layer of mud, and abundantly grown with emerged and submerged vegetation.

Description of the Japanese Trapdoor Snails

Japanese trapdoor snails do not have a siphon and cannot breathe air (unlike Mystery Snails). This is a fully aquatic freshwater snail. The lack of the lung allows this snail to survive in waters below freezing.

Japanese trapdoor snails differ in their shell shape, size and in body coloration. Their shells can vary in color from black, brown to dark green or light green with a large area of white.

They have a “door” (an operculum) which they use to completely close their shell when disturbed or threatened.

If there are no more snails in the tank, it is normal for these snails to have algae attached to their shells.

Japanese trapdoor snails are big snails. They can grow to a maximum size of around 5 – 7 cm (2 – 3 inches).

The Lifespan of the Japanese Trapdoor Snails

Based on annual growth rings (winter and summer rings) various biologists have estimated its lifespan as 3 – 10 years. The wide range of reported life spans is a result of different habitat conditions.

The Behavior of the Japanese Trapdoor Snails

These snails are more active at night, but they may come out in the daytime to do some foraging as well.

In general, Japanese trapdoor snails are pretty active and always looking for food. However, they do sometimes spend a lot of time inside the shell without movement.

These snails are hard to sex. For breeding purposes, it is best to buy a group to increase the odds.

A charming fact about Japanese trapdoor snails is the truth that they are natural scavengers. While they might not be a substitute for tank maintenance, they are absolutely capable of pulling their weight around the tank.

Japanese trapdoor snails are omnivores so they will feed on your algae and help you keep your tank or your pond clean.

These snails will happily traverse the tank looking for food to eat, and they are not at all picky eaters.

Japanese trapdoor snails will enjoy eating decaying matter and cleaning up after its tankmates, often happily munching away on leftover bits of food among other prized snacks.

Sometimes people think that they can treat these snails like other aquarium snails. Basically, it means that they are not feeding the snails, counting on their scavenger abilities. This is wrong!

Keep in mind that Japanese trapdoor snails are mostly used in ponds where they will always find algae and detritus but not all tanks have enough algae in them. They grow fast and need a lot of food. You can give them any type of fish or shrimp food, etc.

Japanese trapdoor snails are plant safe unless they cannot find any other food to eat. You can avoid this by giving them fresh veggies like spinach, zucchini, kale, etc.

You can read about it in my article “How to Blanch Сucumbers and Zucchini for Shrimp, Snails and Fish the Right Way”.

Sometimes, however, these snails are mismarked as a Pomacea sp. which can be voracious plant-eaters. For example, Pomacea canaliculata is on the list of the world’s worst 100 invasive alien species (and top 40 in Europe.), due to their potential effect on the ecosystem and huge economic losses especially in Asia. At the same time, Mystery snails (Pomacea bridgesii and Pomacea diffusa) are plant safe as well (read my guide about these species).

As far as aquatic creatures go, Japanese trapdoor snails are fairly easy to take care of. In fact, they are considered pretty low maintenance across the board because they are very adaptable and can do well in a range of water conditions.

Nonetheless, every creature has its own set of needs, and this one is no different. It is recommended that you provide a tank that is at least 10 gallons per adult Japanese trapdoor snail you plan to house in the tank. For optimum growth, they need a temperature of 18 to 25 C  (~66 – 78 F), a pH of 7.0 – 8.0.

Although Japanese trapdoor snails are not escape artists like some other snails are, its best to keep the tank covered. In addition, if you see them crawling at the top of your tank on a regular basis, it is time to change the water or take a look at your water parameters.

Japanese trapdoor snails can tolerate very low temperatures. As long as they can stay down far enough from the frozen waters, they will survive but they will go into hibernation. That is why a lot of people use them in ponds.

Note: Sometimes snail can get stuck in filter intakes. To prevent any injuries, cover it with a sponge pre-filter for safety.

Tip: If you keep Japanese trapdoor snails in outdoor ponds, be wary! Raccoons love them!

Important: Like shrimp, snails are very sensitive to copper, so watch out for copper if you use tap water or Fertilizers in your tank. You can read more about it in my article “How Copper Affects Dwarf Shrimp”.

Do not forget to acclimate Japanese trapdoor snails before putting in your tank. Read my article “How I Drip Acclimate Shrimp and Why” and use the same principle for the snails.

When it comes to owning snails in a tank, many people have a tendency to worry about crowding or overpopulation. After all, snails do breed.

With that being said, Japanese trapdoor snails are likely not going to lead some kind of army in your tank. In fact, these little guys are likely to do a fairly decent job of keeping their reproduction in check to some extent.

Japanese trapdoor snails do not produce offspring in the first year of life. Juveniles usually appear when the females attain the age of 18 months old.

In Japanese trapdoor snails, embryos develop in capsules kept in the mother’s brood chamber. You can see it in the picture.

Ovoviviparity provides protection for the developing young. They are enveloped by the egg capsule, which breaks before birth.

The average number of baby snails per female ranges from 1 – 15 (usually one or two live babies) and depends on the female’s size. The female gives birth to live babes with fully developed shells. Baby snails are typically between BB-sized and pea-sized.

In the wild, Japanese trapdoor snails do give live birth 2 times a year. However, in captivity, they can do it every few weeks or so.

Tip: Keep in mind that Japanese trapdoor females can store the semen until they are ready for another batch.

Japanese trapdoor snail is a completely peaceful creature, and therefore safe to keep with fish or shrimp. It has no way to defend itself other than retreating and sealing itself into its own shell.

Assassin Snails and Marisa cornuarietis will not be good neighbors. The first ones can harass Japanese trapdoor snails. The second ones will eat all the plants in the tank.

I would not advise keeping them with crayfish or crabs (except Thai Micro crab) as well. For example, even Dwarf Mexican Crayfish, the safest out of all crayfish species, can nip off the antennae of larger snails.

Japanese trapdoor snails are an ideal member of any clean up crew. They will not eat your aquatic plants. They do not reproduce quickly and have far fewer offspring, so it is easier to keep their numbers under control. These exciting little snails are beautiful to look at and pretty hardy.

All these qualities make Japanese trapdoor snails a wonderful addition to any tank.

Japanese trapdoor snails – link to check the price on Amazon.