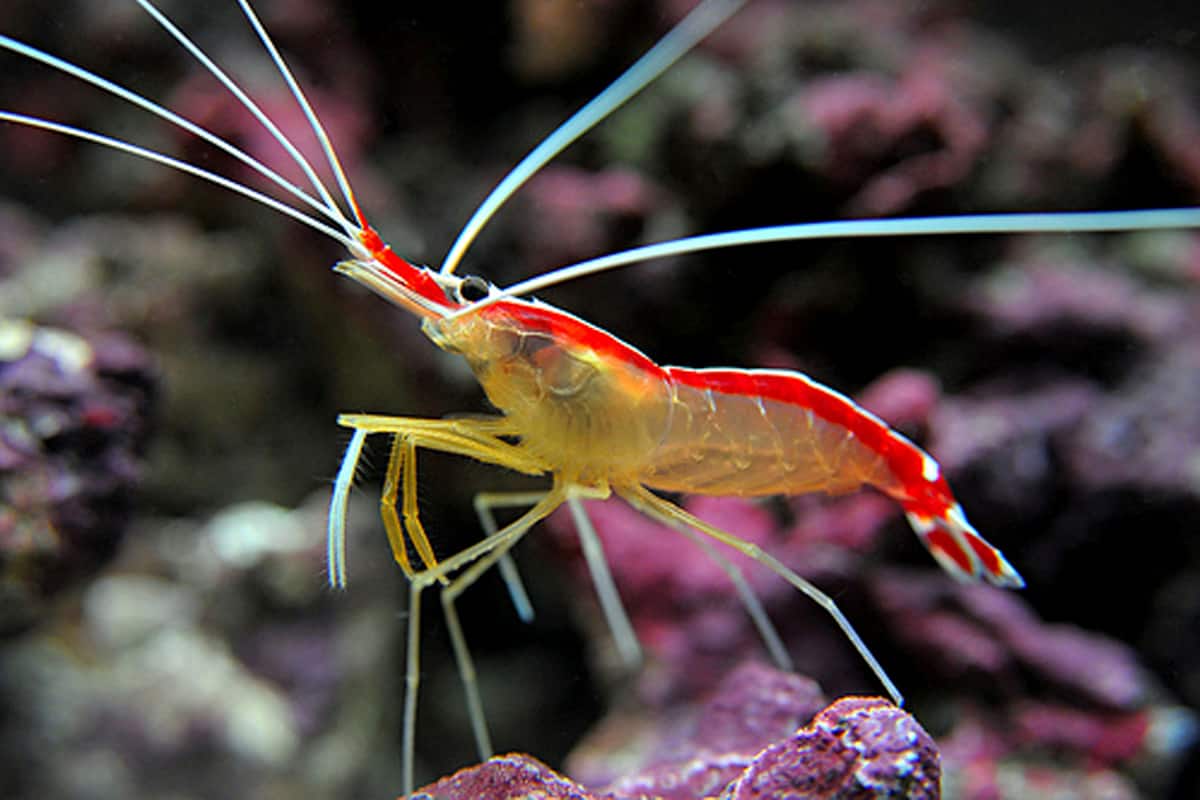 Skunk Cleaner Shrimp (Lysmata amboinensis), also known as the Red Skunk Cleaner Shrimp or Doctor shrimp, are amongst the most popular marine ornamentals and are of high retail value. Therefore, today I will be going through everything from their diet to breeding, and find out if these are the shrimp for you.

The Skunk Cleaner Shrimp is one of the most sought after fish cleaners in the aquarium hobby. Their peaceful nature, hardiness, and busy-body personality have increased their popularity over the last years.

These shrimp are the perfect addition to reef tanks. Do you know that they also use their “medical” skills to prevent infections and contamination even beyond symbiosis with fish? In this article, I will tell you this and many other interesting facts about this amazing shrimp species.

Natural Habitat of the Lysmata amboinensis

They can be found in coral reef systems (usually around the 20-meter mark) of the Indo-West Pacific. For example, In Australia, its range extends from the Coral Sea (east coast of North Queensland) to Seal Rocks in northern New South Wales. There are reports of this species in Jeju-do Island in southern Korea.

Description of the Lysmata amboinensis

Skunk Cleaner shrimp is a popular ornamental shrimp known for its bright colors and striking patterns. They have a beautiful yellow color with two bright red stripes along their back, and a streak of white in the middle. The tip of the tail is red and has four white spots.

They grow to be about 5 – 6 cm total length (2 – 2.4 inches), so they don’t take up a huge amount of space. However, their long white antennae (through which they sense environment) need space to flourish and keep your fish parasite free.

Note: To improve the coloration you can read more about it in my article “How to Enhance Shrimp Color?”.

The Behavior of the Lysmata amboinensis 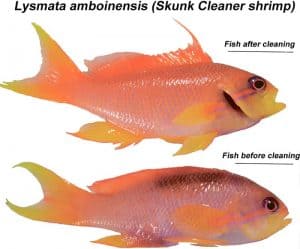 This species is a “low density” or “pairs” species. The cleaner shrimp, as the name suggests, is mainly known for its cleaning properties as it can clean parasites from fish skin, and even the mouth of a large fish like grouper.

In addition, according to the experiments, Skunk Cleaner shrimp can play a vital role in preventative care against parasites of ornamental fish. The beneficial services of Lysmata amboinensis extend beyond symbiosis with fish and include removal of all off-host life stages of marine parasites.

In one of the experiments, they consumed (free-swimming) eggs and larvae of a harmful parasite in the aquarium (for example, Neobenedenia sp., oncomiracidia infection, etc):

By continuing with non-symbiotic cleaning behavior, Cleaner shrimp would continue to reduce the overall parasite load of the system and mitigate the incidence of reinfection. Cleaner shrimp were especially highly efficient at removing parasite eggs during the day.

Are the Lysmata amboinensis Reef Safe?

Don’t let the horror stories of aquarists plague your decision to pick up some of these cleaners, as long as you keep up with their food, there is no danger of them ruining your beautiful coral.

The Cleaner shrimp feed on parasites and dead skin on client fish as well as detritus. They will eat nearly any meaty type of fish food that you put in the tank, just be sure they are getting enough themselves. It is even suggested that you focus on feeding them directly so they are not left out.

Basically, its diet is comprised of meaty seafood or marine flake food.

Note: Many hobbyists have noted that they will steal all the food from the corals. However, this can be solved simply by feeding them regularly.

Skunk Cleaner shrimp are some very chill shrimp. They are easy to keep and do not require special attention or care. Therefore, keeping these guys alive and well in your tank should not be a problem. Since the cleaner shrimp is naturally a reef invertebrate, their needs are nearly the same as most reef species; a temperature between 75 and 82 degrees Fahrenheit, a dKH of 8-12, and pH level between 8.1 and 8.4. In addition, these shrimp need over 20 gallons to thrive in a tank.

Whether a general hobbyist or a pro, good regular water checks and maintenance make this an easy step and create a happy, liveable space for your Skunk Cleaner shrimp. Do not forget to do water changes, as they also cannot live in high nitrate levels.

It is also recommended to have a rock that they can climb or perch upon to act as a sort of car wash for your fish. Fish will swim up to them and await a generous cleaning. It keeps them healthy, bacteria-free and is also an amazing thing to watch.

Important: Before putting them in your tank do not forget to  acclimate them (read more about it).

In Lysmata amboinensis, sexing and molting (the manner in which they routinely cast off an old exoskeleton) go by hand in hand because this species is a protandric simultaneous hermaphrodite.

It means that at first, they develop as males and then change to simultaneous hermaphrodites.

As a result, they can function as both sexes during a reproductive cycle. So, inter-molt shrimp (that functions as a male) is able to mate with newly molted shrimp (that plays the female role). The “male” will breed with the one that has molted (“female”) and fertilize the eggs.

It was found that Skunk Cleaner Shrimp become sexually mature (as a male) at a total length of 34.0 mm. In general, the mean inter-molt period ranges from 18 – 20 days.

All shrimp species need adequate calcium supplement and trace minerals in the molting process. I highly recommend reading my article “How to Supplement Shrimp and Snails with Calcium”.

You can learn more about molting in my article ”Aquarium: Molting Process and Metabolism of the Dwarf Shrimp”.

Unlike most shrimp species, Skunk Cleaner Shrimp is not very active during mating. They usually do not display obvious pre-copulation behavior and take significantly longer to transfer spermatophores and lay eggs after mating.

Even more, male-role Skunk Cleaner Shrimp often do not mate with newly molted female shrimp immediately after detecting their presence.

Biologists believe that this behavior may be at least partly caused by social environments (low density and low competition).

For example, according to observations:

Note: In other shrimp species, males do not wait and mating often takes places even during mid molting process!

Many people wonder about breeding these shrimp, for more cleaners or selling purposes.

Besides documented laboratory studies, there are only a few people in the world who managed to breed a small number of them. 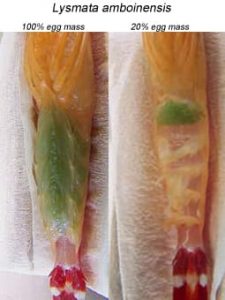 Interesting fact: Mark Wunsch (Bangor) was the first to raise Lysmata amboinensis in 1996 and he wrote his doctoral thesis on it. Out of 2,150 larvae, he could raise only one to settle, after 142 days!

Although nowadays we have significantly more information, the rearing technique is still not good enough. But if you want to test your skills, I have summarized some facts about breeding Lysmata amboinensis. For more information, I would recommend reading the works listed at the end of this article and the unique experience of Luis A M (from reefcentral forum).

Some Facts about Breeding Lysmata amboinensis

To rise Lysmata amboinensis larvae you will need to have a separate tank with water temperature 28C, 8.1 – 8.4 pH and salinity of 35 ‰. Molts, uneaten foods, and wastes should be removed before the next feeding.

upon survival and the combined effect of stocking density and food concentration on growth and survival of young larvae.

According to the results of different experiments:

During the prolonged larval phase, mortality is very high.  The larval cycle of Cleaner shrimp has 14 zoeal stages, which last about 70 days. After that, it takes about another 70 days to metamorphose into a copy of Lysmata amboinensis. At the moment of metamorphosing, larvae can reach 2 – 2.5 cm in length (~1 inch).

Unfortunately, only a small percentage of larval batches survive to the juvenile stage.

Lysmata amboinensis are very peaceful shrimp. So implementing them into any marine tank should be absolutely fine. Just so long as they’re not placed with any aggressive creatures that may attempt to eat or kill them, such as predatory shrimp, crabs or fish (like Hawkfish and Lionfish).

Note: Although these fish will use the cleaner shrimp for their own personal cleaning, there is always the chance they will also gulp up the shrimp.

Interesting fact: If there are fish they identify as “predators” in the tank, they may play ball and advertise their cleaning services to these fish first and most often so as to form a mutual agreement between them. They’ll keep them clean and parasite free so long as they aren’t eaten.

Do not keep many Skunk Cleaner shrimp in small tanks, it can cause aggression. In the confined space, one pair can attack and kill other shrimp.

In one of the experiments, biologists observed selective mortality in the triplet (in 45 liters or 10-gallon tank) and quartet treatments (in 60 liters or 15-gallon tank).

The pattern of mortality was such that, after 42 days, one shrimp in each triplet and two shrimp in each quartet treatment had died. In all cases, shrimp died (in aggressive interactions) shortly after molting. No mortality occurred in single and pair treatments.

The Skunk Cleaner Shrimp (Lysmata amboinensis) is one of the most sought after fish cleaners shrimp on the market. The shrimp are beautiful themselves, and with their long antennae, fun to watch.

Caring for these creatures is extremely easy for the most part, and the return on the investment is huge.  Just give them a decent rock to hang out on, keep their tank mates relatively temperate, and feed them adequately for optimal performance.