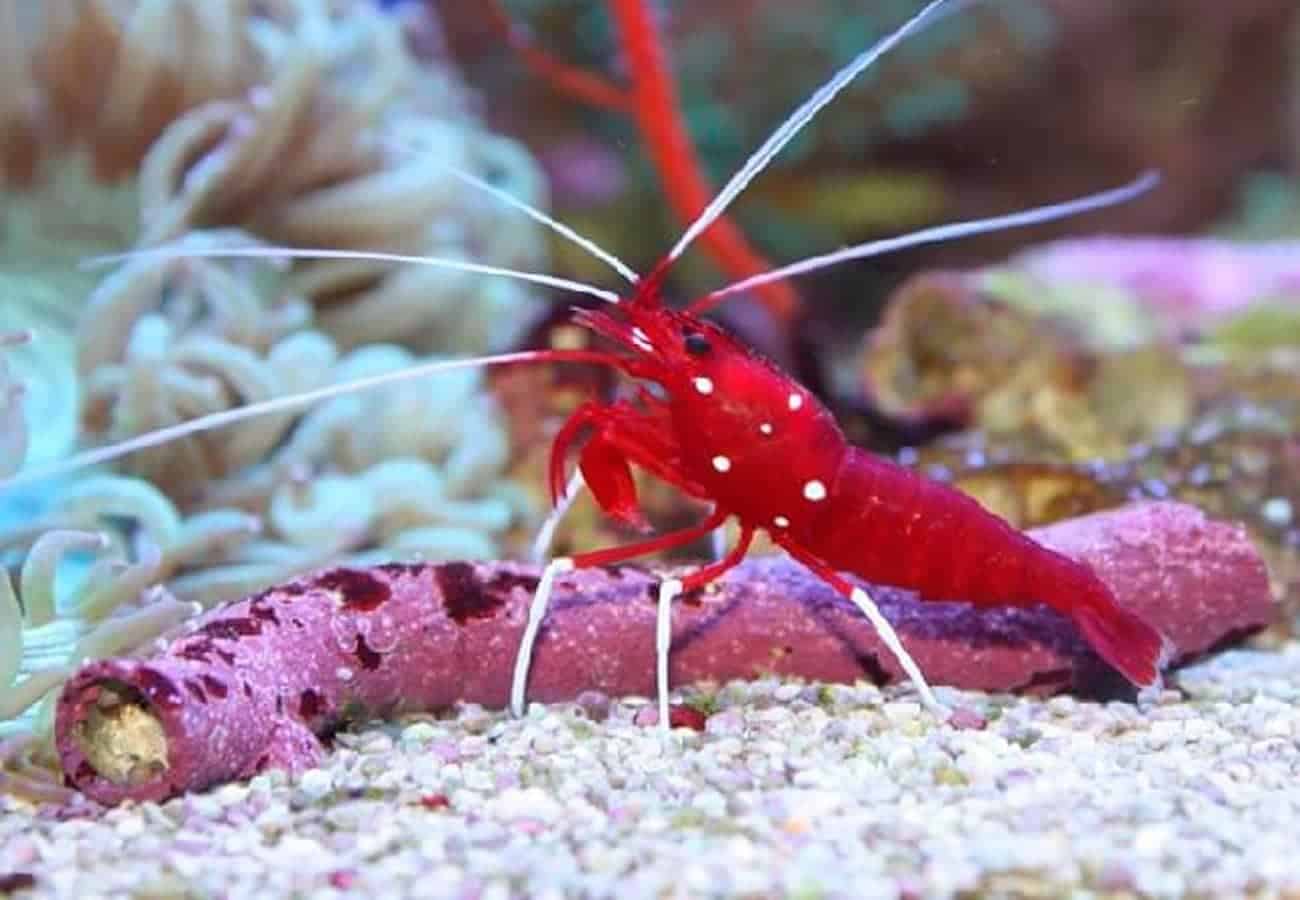 The Lysmata debelius shrimp, also called Red Fire shrimp, Fire shrimp, Scarlet cleaner shrimp, or Blood shrimp, is indigenous to the Indo-Pacific area and is often used in aquariums where its bright-red color is certain to attract onlookers.

If you are interested in keeping Lysmata debelius shrimp in your domestic or commercial aquarium, it is good to know how to take care of it, which is a lot easier than you might think.

Mr. Helmut Debelius, (also known as “The father of fishes”), discovered the Lysmata debelius shrimp in 1983 after whom this shrimp species is named.

Red Fire shrimp are native to Sri Lanka, Bali, Indonesia, and Philippine waters, where they dwell and thrive in the deep (10 – 28 m).

Description of the Lysmata Debelius Shrimp

Red Fire shrimp are one of the most beautiful shrimp species in aquatic hobby. They have a very deep, bright red color with white dots in certain areas of their body as well as white antennae and legs. It is not possible to confuse them with others.

The shrimp has acquired a lot of nicknames over the years and its striking color is one of the many reasons for its increasing popularity.

The behavior of the Lysmata Debelius Shrimp

The Lysmata debelius shrimp are shy and nocturnal, which means that you likely won’t see them much during daylight hours. They tend to come out for food only at night. However, with time they can get used to you and come out more often even in day time. Of course, you can occasionally coax them out when you’re placing food in the tank.

Red fire shrimp are also known as cleaner shrimp because they will actually clean other fish in your aquarium. They will pick off dead scales and skin and even remove ectoparasites from other fish. Many of them even set up their own fish-cleaning area to accomplish this task, making it quite a sight indeed.

For example, according to different observations, in the wild, Lysmata debelius shrimp are associates of fishes, in particular, the groupers and giant moray eels (Gymnothorax spp.) in crevices between large boulders.

Note: There are some reports that in captivity they can become lazy if they have a lot of food.

The Lysmata debelius shrimp are normally found in pairs. Keep in mind that they are territorial and can be pretty aggressive towards their own kind. In some cases, their fights can end with injured (lost) limbs and antennae.

Molting of the Lysmata Debelius Shrimp

The Red fire shrimp also loses its exoskeleton from time to time so this molting process shouldn’t scare you and make you think the shrimp has died. You’ll just look inside the aquarium one day and notice the exoskeleton floating in the water.

When this happens, do not remove it!  The exoskeleton contains a lot of calcium and many other microelements. Your shrimp will eat it later. Like all invertebrates, Lysmata Debelius shrimp need adequate calcium supplement and trace minerals in the molting process. I highly recommend reading my article “How to Supplement Shrimp and Snails with Calcium”.

When the molting occurs, some fish and shrimp owners think that they have to add iodine to the water so the exoskeleton will grow back more quickly but most experts recommend against this process.

The best part of providing care for your Red fire shrimp is that their eating habits are not difficult to tend to because they eat a variety of foods. When they clean the scales and skin off of other fish, they clean those items by eating them, which is part of their diet.

They also eat live or frozen copepods, pellets, and flakes that are already in the tank for other fish, and other types of fish food. Basically, they will accept everything. Therefore, as long as you’re including foods for the other fish that live there, you don’t have to target-feed the Red fire shrimp because they’ll eat what you put out for the others.

Note: Some hobbyists reported that Lysmata Debelius shrimp can sometimes feed on small polyps such as zoanthids and certain SPS corals.

Keeping of the Lysmata Debelius Shrimp

If you’re going to care for the Red fire shrimp, it is good to familiarize yourself with a few of the basics. First of all, the Lysmata debelius shrimp are saltwater animals so you’ll need a saltwater aquarium (SG = 1,023-1,025).

Although it is possible to keep them at home in smaller aquariums with few decorations. The larger ones, that have giant reef structures and other items, are preferable. Therefore, because of their size and territorial behavior, the minimum tank size for one shrimp is 15 gallons (~60 liters).

Note: If you decide to have a couple, and they do not get along, there is a high chance that even 30 gallons will be too small for them. You can have fights between them and (potentially) loses.

Do not forget that you should fully cycle the tank before introducing it to your shrimp because they are sensitive to ammonia and nitrite in the water.

To make sure that they are comfortable, the pH level in your water should be 8.1 to 8.4 and the temperature should be between 25 – 28 C (75 and 82 degrees Fahrenheit). Lysmata Debelius shrimp prefer subdued lighting. They also tend to be a bit shy so it is a good idea to have a rock structure or similar item in the aquarium that they can retreat to when they feel the need.

You need to acclimate any shrimp before putting them in the tank.

Mating of the Lysmata Debelius Shrimp

There is no sexual dimorphism in Lysmata debelius shrimp. They are simultaneous hermaphrodites, where one individual possesses both female and male reproductive tissue and can act as either sex during a single spawning event.

Any two individuals could be selected as a pair. According to different studies, they become fully mature by the size of 2 cm.

Note: At first, all Lysmata debelius shrimp have only male organs. In addition to male organs, they develop female organs as they mature. They cannot self-fertilize.

The point is that Lysmata debelius shrimp still predominantly relies on a collection of wild specimens amounting to over 90% of the traded species being collected from coral reefs. As a result, this situation has contributed to the endangered status of Lysmata debelius.

Fortunately, there are studies and researches with successful breeding results. Biologists are trying to create a captive breeding protocol and a larviculture technology as viable solutions to those problems. I will just describe what they did for that. Therefore, all credits go to them.

During the breeding period:

It is highly recommended to have a separate tank for the larvae.

To reduce the possibility of physical damage from aeration, do not use air stones and under gravel fil­tration. Larvae cannot control their movements and air stones often result in high larval mor­tality.

Breeding of the Lysmata Debelius Shrimp

There are different data about the average number of Lysmata debelius larvae per spawner. For example, in one experiment, it varied from 600 – 1100. In another experiment, it varied from 1350 to 1900. The average number of larvae released per spawner also directly correlated to the weight of parent shrimp. The bigger is the shrimp the more eggs it can carry.

Lysmata debelius will keep the eggs for the entire time necessary for incubation (depending on the temperature it can range from 12 to 16 days) and release larvae usually during the night.

Note: According to another experiment, the larval duration was 75 – 158 days. Biologists believe that the specific climatic conditions and proper nutrition can play a big role here.

There is high larval mortality during early stages. In all cases, the survival rate of Lysmata debelius larvae was pretty low – from 9 to 18 %.

Feeding of the Lysmata Debelius Larvae

It is wrongly assumed that reserves of the newly hatched Lysmata Debelius larvae are enough for the first 24 h of life.

In all experiments, biologists concluded that it is extremely important to provide suitable feeding immediately after hatching to prevent mortality prior to metamorphosis. Without food during the first 6 hours(!), newly hatched Lysmata Debelius larvae lose coloration, reduce swimming activity and may die within 24 hours.

The problem is that even if we feed them later, larvae usually cannot recover from the nutritional stress imposed by early starvation, and finally die. Therefore, we have to supply food to newly hatched larvae to improve their survival rate.

Note: Although microalgae may be useful, alone they are not enough to support growth or survival of Lysmata debelius larval development.

Feeding Lysmata Debelius Larvae (13 days – up to Metamorphosis to Juveniles)
You can add:

Lysmata Debelius shrimp tend to get along with most other fish and shrimp species but there are some exceptions. Some fish that are quite large, such as the large flame cardinal fish, will eat the fire shrimp whole if you place them together.

Red Fire shrimp also are incompatible with riggerfishes, puffers, larger hawk fish, larger wrasses, morays and lionfish. Any fish that is large has the potential of eating your shrimp so you should consider that when purchasing other fish for the tank.

In addition, shrimp-on-shrimp aggression is not that uncommon among fire shrimp so it is best to have only one of these shrimp in your tank. Red fire shrimp simply do not like others of their kind.

This type of shrimp is also a lot smarter than many people recognize. Many of them will start to recognize you after a while and come out to greet you when you get near the aquarium and place food in it. In fact, many fire shrimp will climb onto their owner’s hand and eat directly from that hand if given the chance.

I would like to repeat that Red fire shrimp can pick at your expensive coral so it’s best to leave that out of your shrimp tank altogether.

Besides their dazzling colorations and delicate appearance, a growing number of aquarists use them as members of “cleanup crews” to control the growth of nuisance algae and eat food leftovers.

If you love beautiful aquarium animals that are easy to take care of, the Red fire cleaner shrimp is a great choice. Just keep larger fish and expensive coral away from them and your life with these shrimp should be quite pleasant.