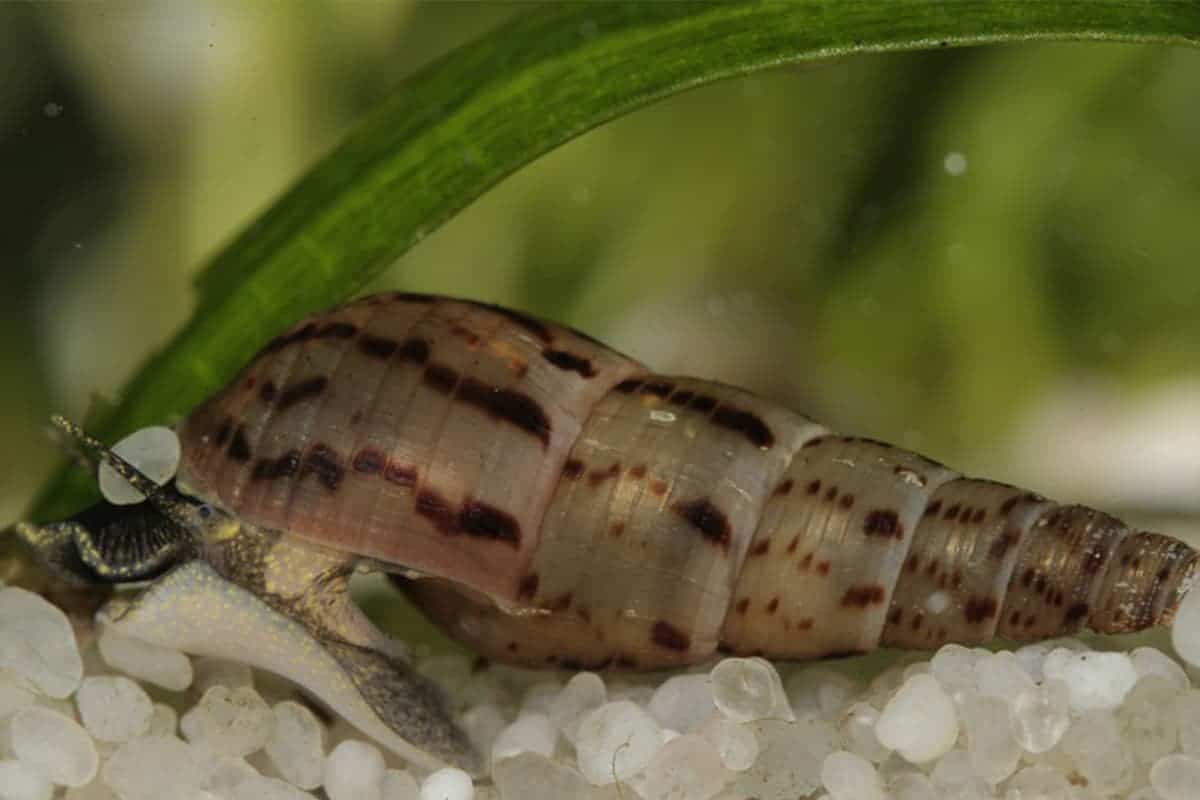 Malaysian Trumpet Snails (Melanoides tuberculata) can be a desirable addition, especially to the planted tanks, because they are great scavengers and help to control algae. However, they can also quickly turn into a horrifying nightmare when they start reproducing out of control in your tank.

Malaysian Trumpet Snails are live-bearing snails. They are very tough and have proved to be able to live and survive in a wide range of water parameters. In aquariums, they are often considered as pest snails.

Malaysian Trumpet snails are the center of many discussions in the aquarium hobby. There are lots of aquarists who hate them with their whole heart and try to remove them as soon as possible. Another group considers them useful and beneficial.

If you have not set up your mind, read this article to know more about these snails. As usual, I combined facts, different results of scientific studies and experience of aquarists in this guide to provide all information about Malaysian Trumpet Snails.

You can also read more about it in my articles:

Distribution of the Malaysian Trumpet Snails

Malaysian Trumpet snail is a freshwater gastropod native to Africa and Asia, and currently presents distributed worldwide favored mainly by its high adaptation to new environments. Today, the species is established or reported in almost all of the regions between north Argentina and Florida, USA, including the West Indies, as well as Venezuela, Colombia, Perú, Brazil, and Paraguay.

According to some reports, it was probably introduced to North America (California and Florida) by the aquarium industry in the 1930’s. By the mid-1960’s M. tuberculata was reported from Texas, Arizona, and the northern part of the Great Basin in southeastern Oregon. In the mid-1990’s, scientists reported Malaysian Trumpet snail in springs of the Nevada portion of the Great Basin. So far, this snail has continued to expand its range through most warm regions of the United States.

Furthermore, these snails are also found in northern Australia, European Mediterranean countries and in environments consisting of the hot springs in Austria, Germany, Czech Republic, Slovakia, and Hungary. 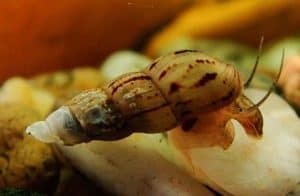 Malaysian Trumpet snails occupy a variety of habitats, ranging from weakly saline close to sea-level to the freshwater of higher altitudes. This species thrives in a wide range of pH and hardness and it is found in different kinds of substrate but most commonly in muddy to sandy substrate at depths ranging between 0.25 and 3.7 m.

In nature, these snails are most often found in slow or stagnant water and they thrive in areas impacted by humans. They colonize stable water bodies such as ponds, lakes, irrigation canals, ditches, municipality drains, rivers, dams, streams, lakes, and levees with for the most part low flow rates.

Description of the Malaysian Trumpet Snails

Malaysian Trumpet snails are relatively small mollusks. Within their native range, average adults of this species vary in size between 2 to 4 cm (0.8 – 1.5 inches). 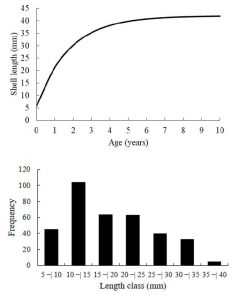 According to the studies, Malaysian Trumpet snails have the highest growth rate in the first year of life, where they can reach 21.31 mm (0.83 inches). After that between the first and second year, the growth rate slows down to 8.87 mm (0.35 inches), while in later years the species tends to grow less than 1 mm (0.04 inches) per year.

Melanoides tuberculata exhibits a broad range of shell variation (more than 27 different morphs) amongst distinct genetic clones or morphs. In general, they have a distinct elongated and conical shell with several whorls usually, 6 to 12.

The shells are usually pale or creamy to dark brown with numerous reddish-brown flames and spots. Although darker varieties are also observed. Most adult shells are distinguishable by the presence of prominent ridges.

Malaysian Trumpet snail’s head is flattened, with a pair of tentacles with eyes at their bases. The mouth is anterior (at the front of the head). It also has an operculum (trapdoor) and papillae attached to the mantle end.

Malaysian Trumpet snails usually live for about 2 to 3.5 years. They mature sexually at an age of 4 months depending on the temperature and feeding regimen.

The Behavior of the Malaysian Trumpet Snails

These snails are primarily crepuscular or nocturnal. They spend most of the daylight hours buried in mud or sand. By doing so they prevent the risk of a gas pocket being built up which can be very dangerous to your fish or shrimp.

Although they may come out in the daytime to do some foraging, it does not happen very often. These snails have the ability to pull themselves deeply into the shell and seal themselves off from the environment. Malaysian Trumpet Snails can survive for a long time sealed in their shells.

How do we get Malaysian Trumpet Snails?

They usually come in via commercial trade with the plants. They certainly can get out of control in the sense that your tank will be crowded with these snails.

Another great advantage of these snails is that you do not need to feed them at all. They are extremely efficient scavengers and cleaners for the fish or shrimp tanks. That is why Malaysian Trumpet snails are like an indicator of the food balance in the tank.

Therefore, if you have a snail infestation, you need to take a look at the feeding and maintenance regime.

Yes, Malaysian Trumpet snails are completely plant safe. They will not eat any healthy plant in the tank. They simply do not eat healthy, living plant material.

Unfortunately, people sometimes confuse grazing on with eating the plant. Even if you see them eating a “healthy” plant, it is not as it seems. It means that the plant is already dying, although, it has not shown yet.

They will trim and eliminate any vegetation that is dead or decaying, leaving the plants to look like they have been attended by a gardener.

When it comes to keeping shrimp, crabs, crayfish or ornamented snails, I always recommend reading my article “How to Supplement Shrimp and Snails with Calcium”.

The point is that sell deterioration is a common symptom in snails that are kept in water that lacks sufficient dissolved minerals, particularly calcium, to help to develop and repair of their calcareous shells. Most snails need water at least medium hardness and pH in the range of 7.0-8.0 for proper shell development.

However, depending on your goal (maybe you are breeding Malaysian Trumpet snails to feed pufferfish or crayfish or maybe you simply like them) you can also include some of the calcium-rich food. In all other cases, I do not see any reason to do so. 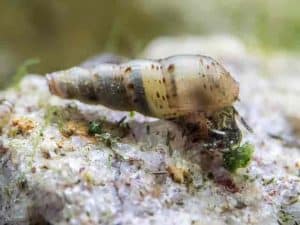 Well, this is the easiest part of this guide. Malaysian Trumpet snails are ultimate survivalists in freshwater tanks.

In nature, these snails have demonstrated an impressive capacity to invade a range of tropical and subtropical aquatic ecosystems. In aquariums, generally, once established these snails are very hard to remove. This is the reason why they are also reported in the literature as a nuisance species. Some of their abilities are so amazing that it makes them one of the most resistant creatures in the aquatic hobby.

Let me give you some examples.

Like all snails, they are sensitive to copper. This is their Achilles heel. In one of the experiments,

Cu was the most toxic metal to the Malaysian Trumpet snails.

Note: In science, LC50 is the lethal concentration required to kill 50% of the snail population.

So watch out for copper if you use tap water or fertilizers in your tank. You can read more about it in my article “How Copper Affects Dwarf Shrimp”.

If you need more information about safe fertilizers, read my article “Shrimp Safe Plant Fertilizers”. There is a description of the most popular plant fertilizers on the market that will not harm your shrimp or snails as well.

Malaysian Trumpet snails are not hermaphrodite (they do not have both male and female organs at the same time). In science terms, it is a viviparous (live-bearing) species with parthenogenetic and sexual reproduction.

It means that Malaysian Trumpet snail has two types of reproduction:

Note: Unless you are a biologist, it can be really hard (impossible) to see sexual dimorphism. For example, males of Melanoides tuberculata can be distinguished from females by the shape of the shell and their red gonad. Male tissue appears dark-red wine in color, and female tissue significantly less red when viewed through the thinner portions of the adapical shell. 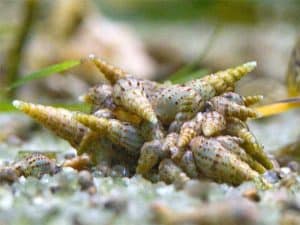 Melanoides tuberculata shows rapid growth and early maturation. Depending on the diet and temperature, Malaysian Trumpet snails reach sexual maturity above 7 – 11 mm (0.28 – 0.43) of shell height (in about 3 – 5 months).

At a shell-length of 20 mm (0.8 inches), the adult individuals attain their maximum reproductive capacity after which fertility gradually decreases. Snails greater than 25 mm (1 inch) stop reproducing but can continue to grow.

In general, the number of developing young in the brood-pouches varies from 1 to 91. However, large Malaysian Trumpet snail females can produce up to 200+ young snails. The egg of Melanoides tuberculata measures 0,01 mm in diameter and is surrounded by an egg capsule measuring 0.15 mm in diameter from which embryos hatch.

Embryos develop in brood-pouches and are released as juveniles with up to 5 – 6 shell whorls. There are many embryos that do not develop into functional animals, but disintegrate becoming part of the food ingested by the developing embryos in the pouch. Developing young diet comprises other egg yolks and brood-pouch reserves.

Newly born Malaysian Trumpet snails measure between 1.5 to 2.0 mm in length, grow at a rate of about 2.5 mm per month. Fully developed juveniles hatch between nightfall and midnight possibly due to a general increase in activity of the species at this time.

Interesting facts: Biologists noticed that the time of brooding and the size of the newborn snails decreased as the number of snails in aquaria increased.

Malaysian Trumpet snails are excellent feeders for Assassin snails, Crayfish, Loaches, Pufferfish, Oscars, etc.  Besides that, they are peaceful snails and can live and thrive absolutely in any community tank.

There are some reports that Asolene spixi snails can also feed on Malaysian Trumpet snails if they are very hungry.

Malaysian Trumpet snail acts as an intermediate host for species that are parasitic to humans and other vertebrates, such as trematodes Gastrodiscus aegyptiacus flukes, etc.
However, do not panic. Human infection occurs by consuming raw físh infected by this Parasite.

Malaysian Trumpet snails are not complicated or difficult to keep. Actually, they are super easy to care for. They accept a variety of food, can be kept in various kinds of water, and breed easily.

They are absolutely harmless creatures and safe with plants. Malaysian Trumpet snails will be an excellent cleanup crew. By feeding on algae and dead organic matter, these mollusks contribute to maintaining a proper biological balance in the tank.

However, the relatively low environmental requirements of snails, as well as their huge reproductive potential in a short time may lead to a significant increase in the snail population in the aquarium.