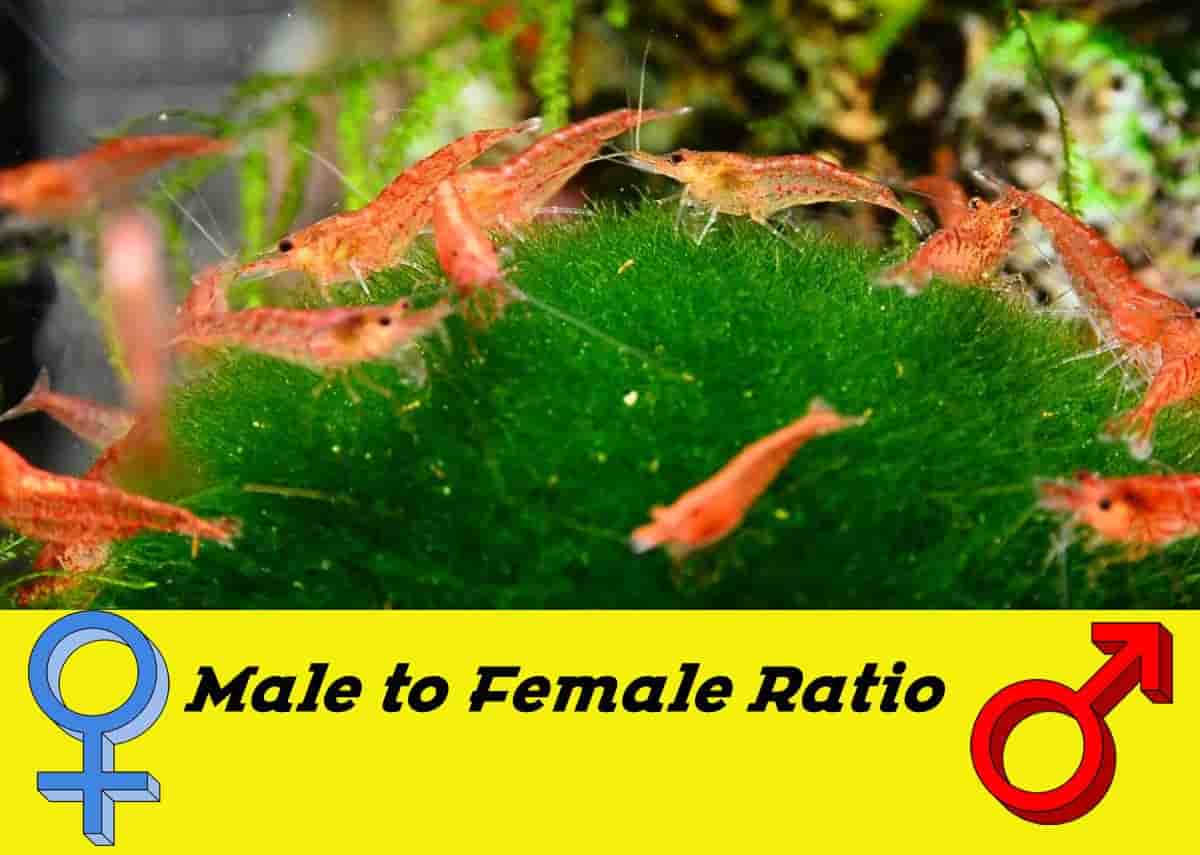 Today we will tell you about one of the most important things in shrimp breeding – the ratio of males and females in the shrimp aquarium. Frankly say, a lot of people have been unaware so far about this issue. They can see that something is going wrong but do not understand the cause of it.

It is absolutely crucial to have a good ratio (3 to 1) of females and males if you want to get real success in the shrimp breeding hobby. These are not empty words. Without good balance, your colony can die out slowly and peacefully over time in the best-case scenario. In the worst case, you will start finding dead female shrimp now and then.

In order to avoid all these negative variants, we need to understand why it is so important and what we can do.

Also, I would like to start off by referring to another matter as well. One of the frequently asked questions is how many shrimp can I have per gallon or liter? Of course, this is a legit question.

The problem is that quantity is not good enough by itself. You can get the optimal number (1 – 2 shrimp per 1 liter of water (or 5 – 10 per gallon)) but your colony will suffer if you have a domination of males or females in your tank.

Do not believe that the ratio does not matter, that is not a big deal. These are incorrect statements from people who have never really had this problem.

Male to female ratio in your shrimp tank

The very first thing that we do in shrimp hobby, we buy shrimp for our tanks. Unfortunately, in some cases, we can get only (or mostly) males in a package.

It is very difficult to understand the sex of the shrimp with the naked eye when they are juveniles, which is when they are mainly sold. Later it might become a huge problem for female shrimp survival. You can read more about “Shrimp Gender. Female and Male Difference” right here.

Too many male shrimp

The problem starts when females are ready to mate. As we all know, they always molt before mating because at that time new female cuticle is soft and flexible, which makes fertilization possible. Any shrimp is vulnerable at the post-molting stage.

For females, molting becomes really dangerous. When she is ready to mate she releases pheromones. These pheromones make the male swim like crazy to find the female. Once they find her, males will try to mate.

Sometimes it looks like they are swarming over her because there are so many of them. Considering the fact that she is soft, weak, and helpless at this time, it stresses the female a lot.

The next thing we may notice is that the female is dead. There are a lot of reports from shrimp breeders saying that 2/3 of all deaths after molting – females. This is the problem we need to avoid.

So, what should we do if we have a tank with some female shrimp and we want to add more males?

In this case, you really need to follow the ratio – 3 females to 1 male to thin those males down. Otherwise, they might one by one take out your females. This way you can prevent female death from being exhausted because of being chased by multiple males.

Do not think that too many male shrimp is the only problem when it comes to ratio. Unfortunately, there is also another side of this coin.

At the same time, if the number of males is not enough, it will decrease the rate of successful mating.

In addition, if you have a big and successful colony of shrimp you can have another problem. For example, when the quantity of females starts prevailing over males then the pheromones of other females in the aquarium can superimpose on each other from time to time. It confuses males and they cannot find the proper females to mate with.

As a result, the female throws off unfertilized eggs and you lose a potential batch of shrimplets. That kind of situation can happen only in a small tank with lots of females. The bigger aquarium will solve this problem to some point unless it is also heavily overstocked.

Note: Unlike the majority of dwarf shrimp, the ideal ratio for ghost shrimp is 1:1.

I have too many females/males shrimp. What should I do?

Now we have come to the second part, how can we solve this problem? Well, if you have significantly more males in your aquarium there are several options for that. Let’s skip advice like – sell / resell them or return them if it is possible (unlikely!) as a return policy, whatever… The real options are:

Note: the aquarium size and hiding places make a huge difference in this matter. According to the results of some experiments with shrimp, in small tanks, the ratio can be 1:5 (male – female).  (Selective and Interbreeding of Freshwater Ornamental Shrimps with Endemic Aquarium Plants / G. Ariyanathan and J. Sesh Serebiah (2016) / Jehovah Shamma Centre for Marine and Wildlife Research, Mudiveeranpattinam, Ramanathapuram Dt-623 513, Tamil Nadu, India).

However, if your ratio is 1:2 or 1:1, it is absolutely vital for females to have places to get away from excessive attention.

According to multiple studies, the temperature affects the sex of the shrimp. You can read my article about “How Temperature Affects Sex Ration of Red Cherry Shrimp”. By doing so there should be more females in the next batches. Unfortunately, this is a long-term solution. But in the long run, in my opinion, it could be the best one for the shrimp colony in general.

Nonetheless, keep in mind that shrimp also have temperature limits. So, if the water is too cold for them they simply stop reproducing. As far as I know, +20 C (68 F) is the critical temperature for breeding.

Note: From time to time I see on different forums that pH has a stronger influence on sex compared to temperature. They say that if you want more female shrimp you need to lower (in some cases increase) pH to 5.4-5.6 and gH 4-6. And vice versa, when you need more male shrimp increase the parameters a little bit higher / lower than optimal.

To be honest, I have serious doubts about that. Maybe it was a coincidence, maybe something else, I do not know why people decided like that. However, I have read lots of different studies about marine and freshwater shrimp and I have not found a single proof of this theory. Sex determination works only with the temperature. Thus, do not play with your water parameters when you do not have to. The results can be very bad.

Of course, if I am mistaken and there are studies and experiments about it, please, tell me. I will change the article according to this data.

The problem of the shrimp male-to-female ratio in our hobby exists. It can be one of the reasons, why females die. Provide enough hiding places in your aquarium and watch the temperature in your aquarium. Follow these simple rules and this problem will not have a serious impact on your shrimp colony.

10 thoughts on “Male to Female Ratio in Shrimp Tanks”