The freshwater snail Marisa cornuarietis, also known as Giant Colombian Ramshorn snail, has a widespread distribution in the Caribbean, Central America, and South America. Its natural distribution has been also expanded as a potential weed and parasite control agent. In this guide, you will know everything about keeping and breeding this snail based on different studies and researches.

Marisa cornuarietis feed mainly on living and decaying aquatic plants. According to multiple studies, it can also consume eggs, newly hatched young snails, and possibly even the adults of other snail species.

Although their beautiful shell and scavenging abilities made them quite popular in freshwater tanks, these voracious monsters do not have any place in planted tanks. They are tireless lawnmowers. Therefore, do not even think of putting them there, unless you have problems with plants, which can quickly overrun your aquarium. In this case, Marisa cornuarietis snails will solve all your problems in no time.

This species is widespread over South and Central America and the Caribbean and native to Bolivia, Brazil, Colombia, Costa Rica, Cuba, French Guiana, Guyana, Panama, Suriname, Trinidad and Tobago and Venezuela.

Marisa cornuarietis snails live in freshwater habitats and any ecosystem with live vegetation including lakes, rivers, ponds, irrigation systems and swamps. They prefer slow-moving and shallow water (1m and less) close to vegetation. They are a diurnal species and spending most of the time searching for food.

They have either yellow/brown stripes or solid yellow colors without any stripes on the shells. Sometimes their shells can be divided into two parts with one side dark and one light. The juveniles of the Giant Ramshorn snailsusually have a reddish/brown color. 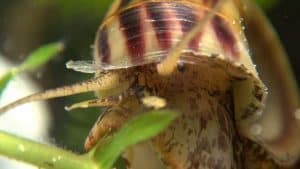 This species has a circular shaped shell with 3 – 4 whorls and 3 – 6 spiral brown bands whereas the juveniles have an elevated spiral with a globose shape. The shell’s surface is smooth. Bodies may be dark brown, goldish, or near black with pretty long tentacles. The eyes are black and pigmented.

Like the apple snails, the Marisa cornuarietis snails have gills, lungs, and an operculum (a trapdoor), which they can retract within the shell entirely. Their lungs allow them to survive in waters with low levels of dissolved oxygen where many other species would perish.

The radular morphology of these snails includes long canine lateral teeth, which pierce and tear plant stem tissues and plant leaves. In addition, their jaws are powerful and can clip and grasp leaves and stems while the radula shreds them. They are voracious herbivores.

This species feeds primarily on living and decaying aquatic plants. They are excellent algae eaters. Biologists noticed that Marisa snails preferred submersed plants to floating or emersed plants. Therefore, the texture of the plants (they prefer soft leaves and especially these snails enjoy eating Ludwigia Repens that has a high concentration of holocellulose) has a lot to do with what they choose to eat.

However, it really does not matter for them when the snails have no other source of food.
According to another study, the Marisa cornuarietis snails have an avid omnivorous feeding habit and can also consume decaying animals, live eggs, and even other juvenile snails! Predation on eggs and snails of other species has been well documented.

They consume other snails only when there is no food around and they are especially hungry. In the wild, it can have a detrimental effect on aquatic vegetation contributing to direct competition, predation of eggs and juveniles, and accidental egg mass disruption. When Marisa cornuarietis feed on other snails, they attack the prey by introducing the proboscis (like Assassin snails read more about them.), i.e., mouth or head, into the aperture of the victim and devouring the flesh by gnawing holes into the victim’s shell.

They are extremely voracious eaters. For example, in another experiment, 150 adult Marisa cornuarietis snails consumed 1360g (3 pounds) of different species of aquatic plants in less than a week.

Note: Some aquarists even report that these snails also eat pests like hydras in their tanks.

Interesting fact:  Some countries deliberately use this species to control the invasive aquatic plant, and the abundance of Biomphalaria snails (hosts of Schistosomiasis disease, which infects about 83 million people worldwide). They act as competitors and also feed on their eggs, juveniles, and even adult snails.

You can reduce its appetite a bit by feeding a lot of vegetables (lettuce, cucumber, Zucchini, etc). However, it will not guarantee that they will not touch the plants. Therefore, fast-growing weed plants like Frogbit, Duckweed, etc will be the optimal choice for the tank with the Marisa cornuarietis snails.

They are relatively undemanding and can survive on leftovers shrimp and fish food (shrimp pellets, shrimp granules, fish flakes, algae wafers, etc – check out the price on Amazon) and biofilm.

Use calcium-enriched foods to ensure their shells will not erode. The use of calcium pills, liquid calcium, cuttlefish bones,  and eggshells is widely encouraged for healthy shell conditions especially when the water is rather soft and acidic. An increase of calcium concentration from 25 to 100 mg/l has been shown to increase both survivorship and shell size.

You can also read my article “How to Blanch Сucumbers and Zucchini for Shrimp, Snails and Fish the Right Way”.

Never keep pH lower than 7.0 with any type of snails. Acidic water tends to erode the shells thus leaving the snail more susceptible to health issues and even death. Marisa cornuarietis snails require pH around 7.5 – 8.0 and the temperature a little bit above average 22 to 28 C (~71°F – 84°F). Although, they are semi-tropical species, they will be absolutely fine at room temperature.

Since the Marisa cornuarietis snails can be quite large, the aquarium should not be too small. A 5-gallon tank will be a good start.

Though the Marisa cornuarietis snails need freshwater for breeding, they are pretty tolerant of salt concentrations and they are occasionally found in brackish waters.

It is best to maintain a slightly dropped water line so that the snails may use their breathing siphon if they choose to.

Interesting facts: This species is very pollution tolerant. According to the study, they can survive several months in dissolved oxygen levels less than 0.5 ppm, in salinities up to 8.5 ppt and temperatures from 30 down to 13 C (55 – 86F). However, egg development stops at 11°C, although adults may survive for over 24 hours. Mortality is 100% after 8 h at 8°C. Exposure to 40°C is lethal to Marisa cornuarietis snails within 1 – 4 hours.

Like all members of the Ampullaridae family, the snails are sexually distinct, both male and female sexes exist with this species of snail. However, as with all snails, there is no easy way to sex Marisa cornuarietis snails. According to scientific literature, we can distinguish the sex of them by the sexual opening, the aperture, and the size.

1. The sexual opening, or the penis of the males, is located on the right side of the head. Do not confuse it with the breathing tube (Siphon), which you can find on the left side.
2. The aperture. Males have a more rounded aperture and thicker shell while females have an oval-shaped aperture with thinner shells.
3. The males tend to have smaller and thicker shells.

Note: Take 5 – 6 snails to improve the odds of having both sexes. In addition, if they are adults then, there is a high chance that the females are already pregnant. 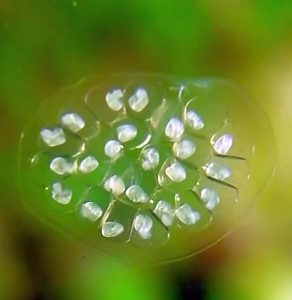 Breeding them is easy. Marisa Cornuarietis is an egg-laying species. Therefore, a few weeks after the mating, the female attaches eggs to plants, stones, and even filters. Under good conditions, the females can deposit an average clutch size of 120 eggs in a gelatinous mass below the surface of the water. This gelatinous mass is transparent and the eggs are visible as small white spots inside.

During the development, the eggs increase in size from 2 mm to 4 mm. When they are about to hatch, the gelatinous mass becomes more transparent and it is possible to see the little snails inside their eggs.

Note: Unlike other apple snails, Marisa Cornuarietis lay their eggs in the water and not outside it.

The fully developed Marisa snails hatch after 10 to 14 days (depending on the temperature). The baby snails emerge from the gelatinous mass and are almost identical to their parents. The difference is that they are not completely flat (as adults) but a bit rounded in shape. They are soft and transparent. First few days after hatching, they feed on the remains of the egg-mass.

Interesting fact: Adult Marisa cornuarietis snails do not destroy their own eggs or young. In one of the experiments, 6 large Marisa cornuarietis snails deposited eggs on a small water lettuce plant. Although no other food was available, the adult snails did not eat any of the plants until the eggs hatched about 12 days later. The plant was then quickly devoured, but the young snails were not harmed by the adult snails. 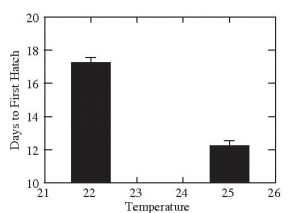 According to the study, breeding these snails at temperatures between 22 – 28°C did not influence the rates of egg production or egg clutch size. However, the rates of growth and development (of eggs and baby snails) increased with increasing temperature in this range. When biologists reduced the temperature to 22°C and less, the egg‐hatching developmental rates became about 15% slower than at 25°C.

In addition, in the 12L : 12D (light and dark) photoperiod, snails grew significantly faster at 28°C than at 25°C. However, in the 16L : 8D photoperiod, the temperature had no significant effect on juvenile growth anymore.

According to observations, their eggs do not develop successfully at 35-37°C and the mortality rate is about twice as high at the lower temperature. A female of Marisa Cornuarietis can store active sperm in the genital tract for months after copulation, enabling her to reproduce even if she does not mate for months thereafter. Therefore, it is almost impossible to prevent reproduction.

Let me start off by repeating that the Marisa Cornuarietis snails should not be socialized with other snails, as they are capable to eat their eggs and baby snails. Especially species, which do not have trapdoors to protect their feet.

Do not keep them in aquaria that contain loaches, pufferfish, or any large/aggressive species that have a voracious appetite for invertebrates. Unless, you are one of the aquarists who use Marisa snails as a permanent source of live food, for fish or crab aquariums.

Peaceful and non-aggressive fish will be good companions for them in your tank. However, their long antennae are prone to be nipped by even some of the more easy-going fish. Do not worry, the snails have the ability to regenerate their lost body parts.

They are particularly well suited for shrimp tanks. They are an insatiable eater and produce a lot of bio-load, which will make your shrimp happy.

You can read more about it in my article “Benefits of Snails for a Shrimp Aquarium”.

Read my “Guide: How to Breed Shrimp”.

The Marisa Cornuarietis snails are interesting looking and active animals.  These beautiful monsters have a voracious appetite for everything, especially for plants. Therefore, they really do not suit decorative planted tanks. Some people breed them for fish and crab food. Others use them to control the invasive aquatic plant in the tanks. Overall, it makes them quite popular in the aquatic hobby.

Rotala Macrandra is a famous and attractive aquatic stem plant that drastically complements the aesthetics and outlay of freshwater aquaria. It is very popular among aquarists and in the...