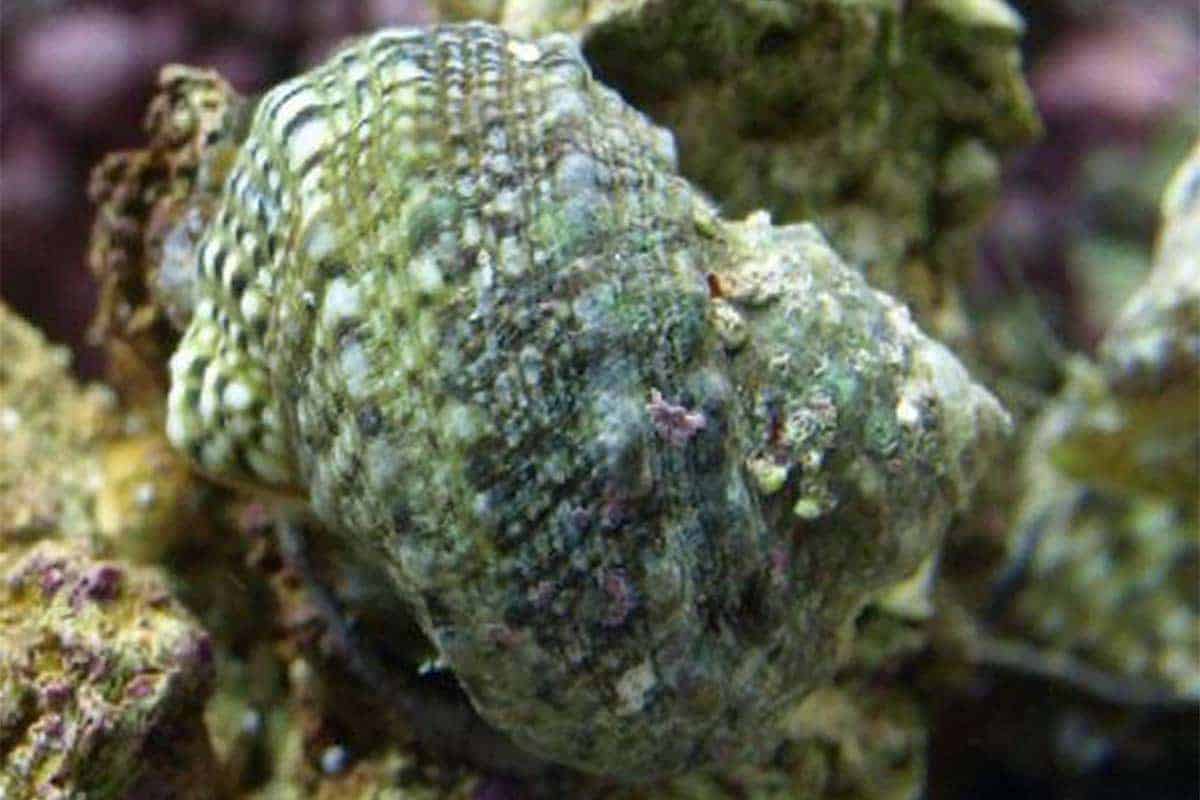 Mexican turbo snails (Turbo fluctuosa or Turbo fluctuosus) are one of the most popular saltwater aquarium snails in this hobby. Mostly kept as members of a clean up crew, they are highly valued by aquarists for the service they perform.

Mexican turbo snails are excellent scavengers and algae eaters that help keep the glass and any rock or decoration clean. These peaceful snails get along with anybody that will not eat them. The only problem is that sometimes it can be hard to keep them alive for a long period of time.

Below you will find all the information you need to know on how to care for Mexican turbo snails, what to feed them and how to make a healthy snail home. Let’s get started.

The optimum depth for these species is between 1 m and 30 m (1 – 30 ft).  Its preferred habitat is the moderately exposed coral reef shore.

These snails are native to the Gulf of California off the coast of Mexico and range from Cedros Island, Baja California to Peru, including the Galapagos and Tres Marias Islands.

Description of the Mexican Turbo Snail 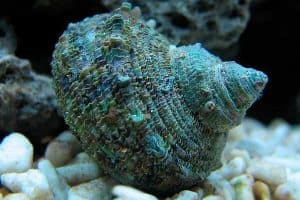 Mexican turbo snails have domed, spiral-shaped shells that typically grow up to 5 cm (2 inches), however, old snails can get larger than 7+ cm (~3 inches) in size.

These snails have a variety of colors where the most popular colors are light brown, reddish-brown, greenish, or orange with whitish and dark brown mottling.

Their shells are thick and consist of five rounded with angled shoulder whorls.

Mexican turbo snails have the operculum (the trap-door). The operculum is the other part of their structure and is the place utilized to close the shell’s opening. This is a nice way to see whether your snail is healthy and alive. The operculum falls off as soon as the snail dies but will not close properly if there is something wrong with that snail.

The head has two small tentacles to help them find food and sense the environment. Their eyes are directly behind their tentacles. The eyes detect light and motion.

In nature, Mexican turbo snails can live up to 3 – 5 years. While in aquariums they often do not live more than 1.5 years.

The Behavior of the Mexican Turbo Snail

Mexican turbo snails are very peaceful in that if they are attacked by an aggressive hermit crab or fish, all they will do is hunker down to hide inside their shell.

They are extremely slow in its movements but cover a large area during their foraging activity in search of food. The younger snails are more active than the older ones.

Mexican turbo snails are nocturnal and start grazing after the lights are off. However, they also become active a few hours after being kept in darkness, regardless of the time of day.

Interesting fact: On a 24-h cycle, dusk is a period in which algae had maximum nutrients at the end of the photosynthetic period corresponding to profitable conditions for grazers to feed at the end of the light period.

When they fall up-side-down, in general, they are able to right by themselves. However, because of their heavy shells, this is no easy task for them. So, keep it in mind and always help them. Being upside-down makes them vulnerable to predation from tankmates.

Mexican turbo snails are not a burrower type of snails and remain active and spend the vast majority of their time below the waterline. Therefore, the risk of escaping is pretty low.

Yes, they are reef safe. Mexican Turbo snails will not damage anything in a reef tank on purpose. When looking for food, they will not try to snack on corals.

However, there is still one main problem, it relates to their size and strength. Mexican turbo snails tend to knock things around them. Lots of Aquarists mention that their Mexican Turbo snails simply bulldoze through the corals.

Note: To prevent any incidents some aquarists advise to glue corals to the rocks. 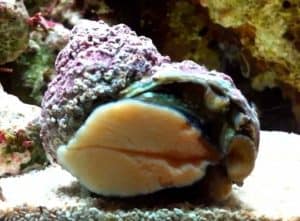 Mexican turbo snails are herbivorous that are mostly associated with specific food sources (like algae and seaweed). Therefore, if you have problems in your tank and want to get rid of hair algae, slime (filamentous) algae, brown macroalgae, diatoms, cyanobacteria, then you need these snails.

These amazing scavengers will gladly help you to deal with that sort of the problem in no time. Mexican turbo snails will eat algae on aquarium glass, sand, and rocks, which grows on it. This is why people use the snails to keep the glass clean for a longer period, meaning less work for you. You can see the snails’ tracks as they graze and move around.

These snails can hold blades of soft algae between two halves of the frontal part of its foot, so that it may be able to pick up and eat algal fronds deposited on the bottom of an aquarium. No other snails can be more effective than Mexican turbo snails, they are huge voracious algae eating machines.

In aquariums, these snails will also feed on leftover shrimp or fish food, such as pills, flakes, pellets, algae/spirulina wafers, frozen foods, etc.

Important: Mexican turbo snails need a lot of food, so be prepared to supplement with herbivore pellets, (algae pellets, dried algae, etc.) if you do not have enough algae growth.

Like all snails, Mexican turbo snails need calcium either in their diet or in the water (ideally, both) to make their shells hard enough to sustain their body. They have shells, which consist of calcium. Keeping calcium levels between 350 and 450 ppm is best.

You can read some of my related articles (the principle is the same with snails): How to Blanch Сucumbers and Zucchini for Shrimp.

How many Mexican Turbo Snails do you need?

Recommended stocking rates vary widely, and it is easy to become confused with conflicting information regarding the best numbers to add to a system.  As a have already said, Mexican Turbo snails are voracious eaters and may starve if you do not offer them algae or vegetable wafers.

If you are buying them for algae control, the rule of thumb is generally 1 Turbo snail per 5 – 10 gallons (~20 – 40 liters) should be good enough. Of course, it depends on the conditions of your tank and how many algae you have.

If the situation is totally out of control (as if you do not see the opposite side of your tank), or you have declared war to the algae and want to remove it as fast as it is possible, it is recommended keeping 1 Mexican Turbo snail per 1 – 3 gallons (~10 liters).

Note: Personally, I still believe that it seems a bit too much. Be always conservative in their stocking because their appetites are enormous. If there is no rush, eventually, Turbo snails will deal with this problem and if you have lots of them, it will become problematic to feed them later.

Tip: Mexican Turbo snails are pretty big for saltwater tanks and they can have problems with getting into small places. In this case, you can also add Cerith snails or Astrea Snails. These small snails are also great at eating algae and their small size allows them to get to the holes and crevices which are unachievable for other members of the clean up crew.

Keeping Mexican Turbo snails can be easy and difficult at the same time. They do have some specific requirements if you want to create an ideal environment for them. The point is that Mexican Turbo snails do not tolerate well high temperatures in the saltwater tanks. In addition, they do not have the ability to withstand high tolerance for poor husbandry.

Mexican Turbo snails need to be in an established tank with sufficient size and water volume to support its needs. The minimum recommended tank size for these snails is a 10-gallon (40-liter) tank. The bigger the tank the better.

Note: When the pH is lower than this range, shell growth can be disrupted to damage the snail shell.

They can tolerate most types of water movement but prefer slow-moving water.

For the substrate, you can use either sand or small gravel. Remember that in the wild, Mexican Turbo snails usually prefer to live in intertidal sandy-bottom substrates. Therefore, sand is the most ideal substrate for them. These snails are great at aiding in aerating the substrate as well.

Include plenty of live rock for the Turbo snails to graze on and used as hiding areas that help to make them feel secure.

They do not need fancy filtration and lighting. You can just purchase a normal LED aquarium light.

Important:  Mexican Turbo snails are not very hardy. They are rather sensitive towards even small changes in water values. Therefore, before putting them into your tank do not forget to carefully acclimate them (read more about it) as all invertebrates. Do it very slowly. In general, 2 – 3 hours will be good enough.

Mexican Turbo snails are gonochoric (separate male and female individuals), but cannot be distinguished externally. There is no official data when and at what size they become sexually mature.

It is relatively difficult to breed Mexican Turbo snails in aquariums. The fertilization is external and nocturnal.

Spawning is initiated by males. Female spawning is induced in response to the presence of the male’s seed in the water. Females generally spawn for 5–10 minutes, with individuals releasing oocytes (unfertilized eggs) in the water column.

Although females can release a lot of eggs, the mortality rate is very high and only a few will survive and become adults.

Mexican Turbo snails are good companions to shrimp and non-canivorous fishes. They are very peaceful and inoffensive.

For example, they are compatible with:

Note: Bumble Bee Snail can attack weak or up-side-down Mexican Turbo snails if there is not enough food in the tank.

The problem is that Hermit crabs can try to kill them just for their shells. If you still decide to keep them hermit crabs, it is important to make sure that the Hermit crabs have numerous empty shells spread out through the tank. Although it can reduce aggression, it will not eliminate it.

When buying Mexican Turbo snails, look for the small ones that appear healthy and moving. Make sure the snail does not have any shell problems (broken or damaged).

Mexican Turbo snails are the best algae eaters and scavengers in saltwater hobby. They can rid the tank quite fast of unwanted algae growths. However, their strength is also their weakness.

They have a hard time surviving where there is not enough of their food (algae) source available. So, do not forget to provide them some vegetable-based tablet foods if needed.

These snails are certainly of great use in the prevention of undesirable algae in the reef aquarium, and yet they are stocked without any understanding of their requirements. Although it is not hard to care for Mexican Turbo snails, keep in mind that these snails are not super hardy and do not live long in high temperatures.