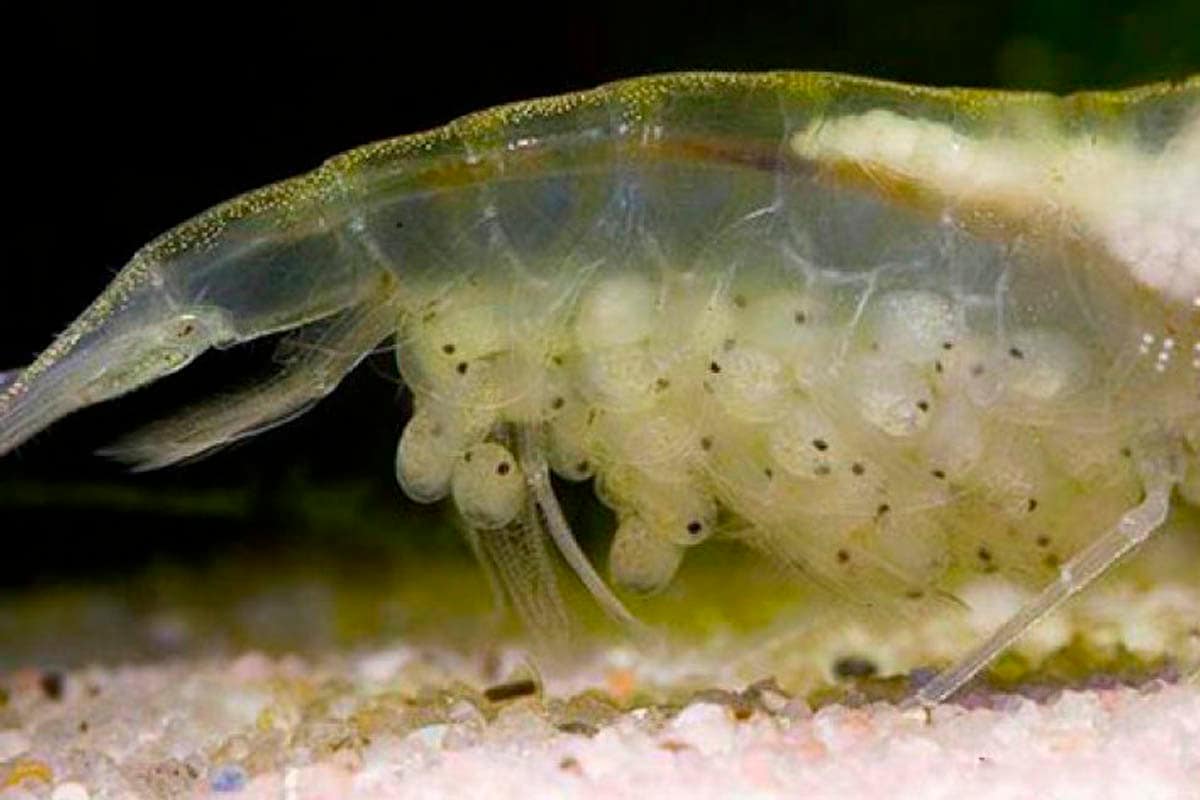 The hobby of keeping aquarium shrimp has been steadily increasing in popularity for years. Shrimp make a great addition to home aquariums and as an added bonus, they came in a wide variety of shapes, colors, and sizes. And while the care regimen for shrimp might seem intimidating for novices, it is actually fairly simple with a bit of research and background knowledge.

For those just getting into the hobby of keeping shrimp, missing shrimp eggs can be a frustrating and difficult to diagnose problem. There are a wide variety of causes that might cause a shrimp to lose eggs and it takes some time and research to pinpoint exactly what might be causing your female shrimp to lose eggs.

In this article, I have compiled a list of some of the most frequent reasons that shrimp lose eggs along with potential solutions to these problems.

Read the Guide: How to Breed Shrimp

Perhaps the most common reason that new shrimp owners might find affecting their female shrimps’ ability to keep is eggs is simply the fact that they are inexperienced mothers. Female shrimp that have only experienced a few “pregnancies” will drop eggs quite frequently. This is a normal occurrence and should not be a cause of concern.

Most frequently, inexperienced female shrimp will lose eggs at the fanning stage of their pregnancies. Female shrimp carry their eggs underneath their tails by using pleopods, where they constantly fan the eggs to provide them with oxygen. Fanning also helps to ensure that the eggs stay clean and free of bacteria and mold.

This process may take a few pregnancies to master, but with a little patience, your female shrimp should be able to maintain successful pregnancies regularly.

Additionally, a new environment can be stressful for your shrimp and this added stress can cause them to lose eggs. You may even find that your shrimp will not breed for a period of time after bringing them into a new environment. This is a normal occurrence in both male and female shrimp.

Ideally, you should find out everything about water parameters where they were kept in and try to duplicate them. After that, slowly change to what you want them to be.

The first is triggered by incomplete fertilization of an egg, in which the egg lacks the genetic material to develop into an embryo and the egg is lost.
Note: For example, it can happen in a heavily overstocked aquarium, when the quantity of the females starts prevailing over males.

You can read more about it in my article “Male to Female Ratio in Shrimp Tanks”.

The second occurs during the oviposition stage of the shrimp’s pregnancy when the shrimp lays their eggs. Shrimp lose their eggs at this stage because the eggs are not adequately attached to the pleopods of the mother and hence cannot survive.

Late stage egg loss is somewhat harder to determine and can be caused by a wide variety of factors. By this stage in the eggs development, attachment structures connecting the egg to the mother have been exposed to more wear and tear and are thus more prone to loss.

In other cases, the appearance of late stage egg loss does not reflect a loss at all but rather a natural process called batching. Batching occurs when eggs hatch over a period of time rather than all at once.

One reason that eggs are lost late in their development is simply a result of their larger size. These larger eggs have more sophisticated metabolic structures than early stage eggs and as a result, they are more susceptible to increases in stress levels as a result of environmental factors. These environmental factors have perhaps the most significant impact on brood loss in females, but fortunately, they are also the easiest to control.

Brood loss by environmental factors can be triggered by improper temperature, water hardness (GH and KH) or PH levels (read my articles about it). Any sudden changes to these or other environmental factors will cause stress for your shrimp population which can easily trigger egg loss. Keep in mind that the most important thing for shrimp is consistency.

Note: Calcium is a key component in promoting egg and shrimp growth, so maintaining adequate levels of calcium can go a long way in ensuring the healthy development of shrimp offspring.

I highly recommend reading my article “How to Supplement Shrimp and Snails with Calcium”.

Unfortunately, female shrimp will occasionally molt with eggs attached to their exoskeletons, triggering a loss of the brood. Under normal circumstances, it usually does not happen in aquariums with an established eco-system. Unless some sudden fluctuations in water parameters shock them.

That is why do not ever do big water changes! It can shock them and they will try to molt when they are not ready yet.

You can read more about it in my article “Dwarf shrimp and Molting problems. The White Ring of Death”.

Other Causes of Egg Loss

There are several other potential causes of shrimp egg loss that have been demonstrated in recent studies. According to researchers, increased water uptake in eggs is a significant contributor to egg loss. This is because the increase in egg volume caused by water uptake limits the availability of egg carrying space, resulting in smaller broods.

Excessive handling of shrimp can cause increased stress levels, contributing to brood loss in berried females. Handling should be kept at a minimum when possible to reduce stress for all shrimp, berried or not.

Finally, an old shrimp colony that fails to introduce outside members for an extended period of time can also result in increased rates of egg loss. This can be attributed to a lack of genetic diversity resulting in more feeble offspring and occasionally even genetic mutations among the population.

On the positive side, you can still save the eggs and artificially incubate them. However, to do that, you will need an egg tumbler that you can make yourself or buy.

Read my article “Save the Eggs from a Dead Shrimp”.

While egg loss in shrimp can certainly be a challenging problem to diagnose and resolve, it should not deter any new shrimp keeping enthusiasts from pursuing the hobby.

Though this topic has been somewhat under-researched thus far, the scientific community has made significant efforts to conduct research on shrimp egg development and egg loss. Hopefully, these studies will yield results in the near future. For now, however, the best thing to do is to gain a bit of knowledge and lot of experience to prevent egg loss in your shrimp.

11 thoughts on “Missing Shrimp Eggs: Why This Occurs”