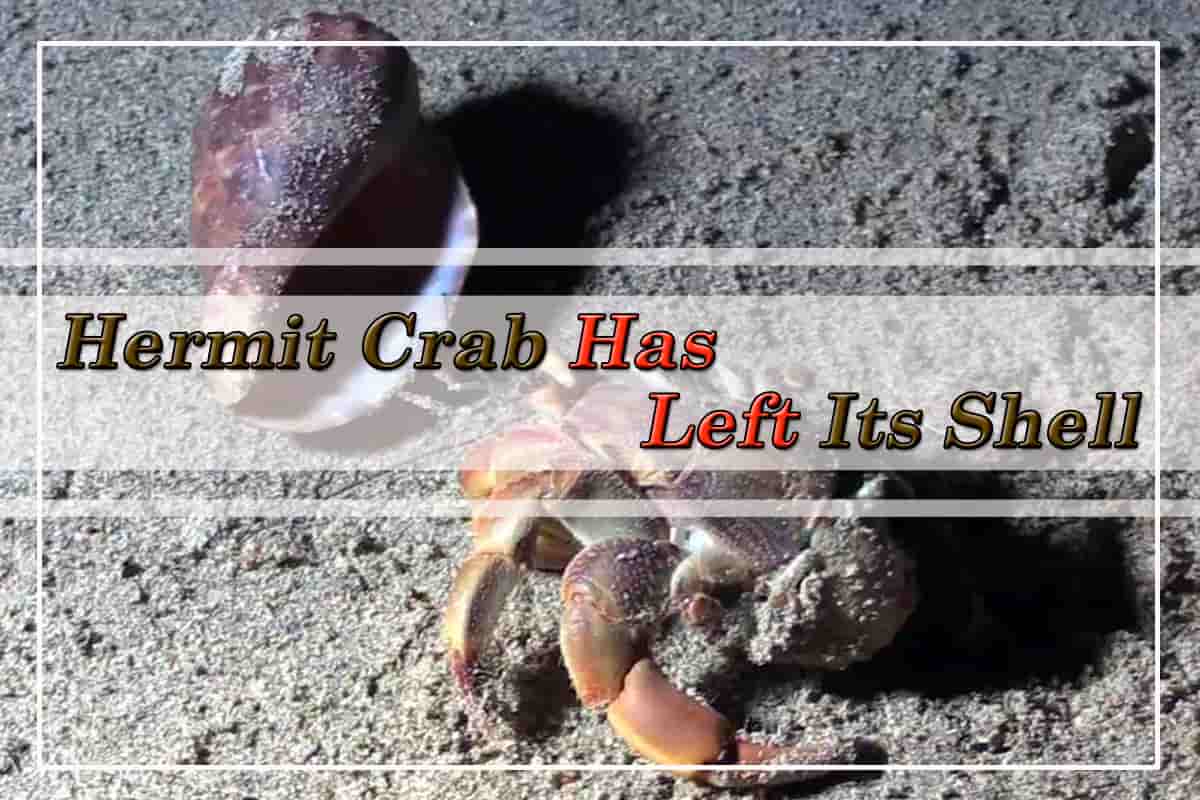 Hermit crabs are nice little pets that can live for up to 20 – 30 years with you if you take care of them properly. Despite their small size, and the fact they probably look easy enough to look after, they require a great deal of maintenance, and something can easily go ‘wrong’. For example, they might suddenly start leaving their shells and refusing to return into it.

The problem is, when hermit crabs leave their shells, they become exposed to the outside (especially their soft abdomen), and they start being at risk of drying out or being hurt by other hermit crabs. So what to do in that case to prevent the crab from being injured, and how to get it back into a shell?

Hermit crabs are recognisable by their shells, and it is quite interesting that the shells are almost the currency in their world. Some crabs exchange shells with each other, and the other will fight aggressively for a shell they want. Their shells are their homes and their protection. When crabs feel like they are in danger, they retreat into their shells immediately, as they do not really have other ways of protecting themselves.

Causes of a Hermit Crab Leaving its Shell

First, let’s talk about potential causes of a hermit crab leaving its shell.

Because it borrows snail shells to live in, it simply might be that Hermit crab has found something better and more comfortable to wear. However, when it happens they usually do not leave their shells for a long time. In most cases it is like an instant switch.

Another thing that you need to know that some species of Hermit crabs do not leave their shells that often.

Hermit Crabs is about to Molt

Hermit crab has grown too big for its current shell and it needs a new one. Therefore, it might be pre-molting stage because it is about to shed its exoskeleton. If that is the case, you might be able to recognise it by several tell-tale signs (although not all of the Hermit crabs will display all, or sometimes any at all, symptoms).

If you notice these signs, and your Hermit crab’s habitat is otherwise impeccable, you do not need to worry and can just leave the crab to do its thing. However, after the molting, the crab will want to move in a bigger shell, so make sure it has several choices of shells readily available for it to choose from.

Hermit Crab is Under Stress or Got Sick 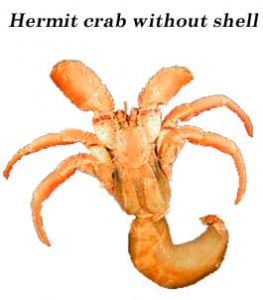 When a Hermit crab leaves its shell, and it is not because of the molting or the preference issue, that means that it is under some sort of stress, or that there is a problem with its shell. There are several common issues that can cause this to happen.

Keep in mind that Hermit crabs are also known to hide their food inside of their shell. This problem is sometimes remedied by crab itself by molting. If not, you can boil the shell in dechlorinated water and shake it vigorously until whatever is in there gets dislodged. It should work most of the times.

What can you do to return your Hermit Crab back in the Shell?

So, your Hermit crab is out of its shell and it will not go back in. What can you do to help coax it back in? The first method described is used for the situations in which a crab has left its shell for reasons other than molting. In the case of molting, the procedure is different (and it will be described too).

1. Prepare the Shell for your Hermit Crab

Before and after handling the crab and its shell, wash your hands thoroughly. The best way to start is to rinse or boil the abandoned shell and shake it thoroughly, as mentioned before, so that anything that might not belong in there gets removed.

Pour out most of the water from the shell and place it in a cup or a bowl, depending on the size of the crab. You can also mist the shell with the dechlorinated sea saltwater. The container in which you put the shell in should be just big enough for the crab and the shell, not bigger, and, of course, not too small either. Add some dechlorinated sea salt water into the bowl to prevent the crab from drying out and dehydrating.

Take the crab carefully from its enclosure by lightly holding it just behind the last pair of walking legs, or use a spoon to gently scoop it up. Put it for three seconds in a bath of lukewarm saltwater. Examine its abdomen carefully for any signs of irritation or injury and be very careful that it does not try to escape, as it can injure itself a lot that way. Check it out for the molting symptoms too, such as the lifting of the old exoskeleton, transparent eyes, etc.

3. Put the Hermit Crab in a Dark Place

Put the crab into the bowl next to the shell and cover the bowl and leave it somewhere dark, but with the appropriate humidity and temperature.
Note: You can put the bowl back into the enclosure, but make sure that other crabs cannot climb in it.

You can make it dark in there by covering the bowl, but, of course, make sure it still has enough air available. You can use a washcloth or something similar. The darkness should help your crab relax and make it feel secure enough to get back into the shell. Quite often, an hour or so should be enough. 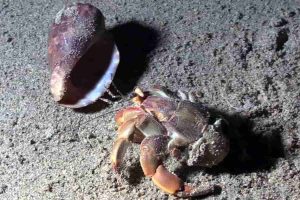 Another thing you can do is keep the crab and its shell in the habitat, but make an isolation zone by cutting up a large soda bottle in half, and then putting it so it surrounds the crab and the shell, with an open hole on top so that, once again, the crab does not lack air. If the crab takes longer to move into a shell, provide it with easy access to food and water too.

Important: In the case of current or recent molting, handling the crab needs to be even more careful. You can use the cut bottle method, but be aware that, while it will prevent ‘threats’ from above, it will not stop the crab from burrowing in the ground, so if it goes deeper, it can exit the protective dome. If the other crabs seem to be a threat to the molting crab even after it is in the dome, you might have to remove it to a more secure container, such as a bowl with a lid (but poke holes for air in the lid), inside of the habitat. When you do it, make sure that there is at least six inches of the substrate so that the crab can burrow fully and complete the molt. The bowl should also be slightly larger than it is necessary for the non-molting crab.

Note: If your Hermit crab is too big for the bottle method, you may have to separate it into a quarantine tank at once.

How to move the Hermit crab into the isolation

When moving the crab into the isolation bowl, gently scoop it up with a spoon, but make sure you scoop the substrate below it too so that the crab is not touching the spoon. Place the crab into a bowl carefully along with its most recent shell and a couple of similar ones.

If the old exoskeleton is still available, be sure to put it in the bowl too. Add some water and different kinds of food for the crab. Some of the options are scrambled eggs, honey, worm castings, or anything else you know the crab likes. The molting takes about a month, so you should be patient with the situation, and keep providing the crab with everything it needs.

5. Give your Hermit Crab More Shells

You can also give the crab multiple housing options to choose from. If you have noticed that it likes a particular shape or style of the house, place several of the similar shells around it, preferably a bit larger than the one it has been living in before. Clean them before putting them in and mist them with dechlorinated sea saltwater.

In case your Hermit crab still does not want to go into a shell, gently pick it up and try slipping its abdomen into a shell. If Hermit crab keeps getting out of the shell, place it back in the isolation tank.

If the crab is slow to enter a new home, there is not much more than you can do than just wait. Keep providing it with food and water and keep the correct heat and humidity for it. It should not take the crab a long time unless it is molting, but if it does, one trick you can try is removing a few shells for a day or two and then returning them until the crab finally chooses one. To make sure that the crab does not dry out, you can add a drop of dechlorinated water to its abdomen hourly.

In case of your crab leaving its shell, the main thing is not to panic or worry immediately. Sometimes it might be a sign of something bad, but most likely, it is either molting or is simply inconvenienced in some way. You can help it by following these steps.

Of course, if you think that there might be something wrong with your Hermit crab’s health, do not dismiss it and bring it to the veterinarian. After all, you and they know the crab and its health history the best and can figure out most easily what is going on with it.

4 thoughts on “My Hermit Crab Has Left Its Shell”