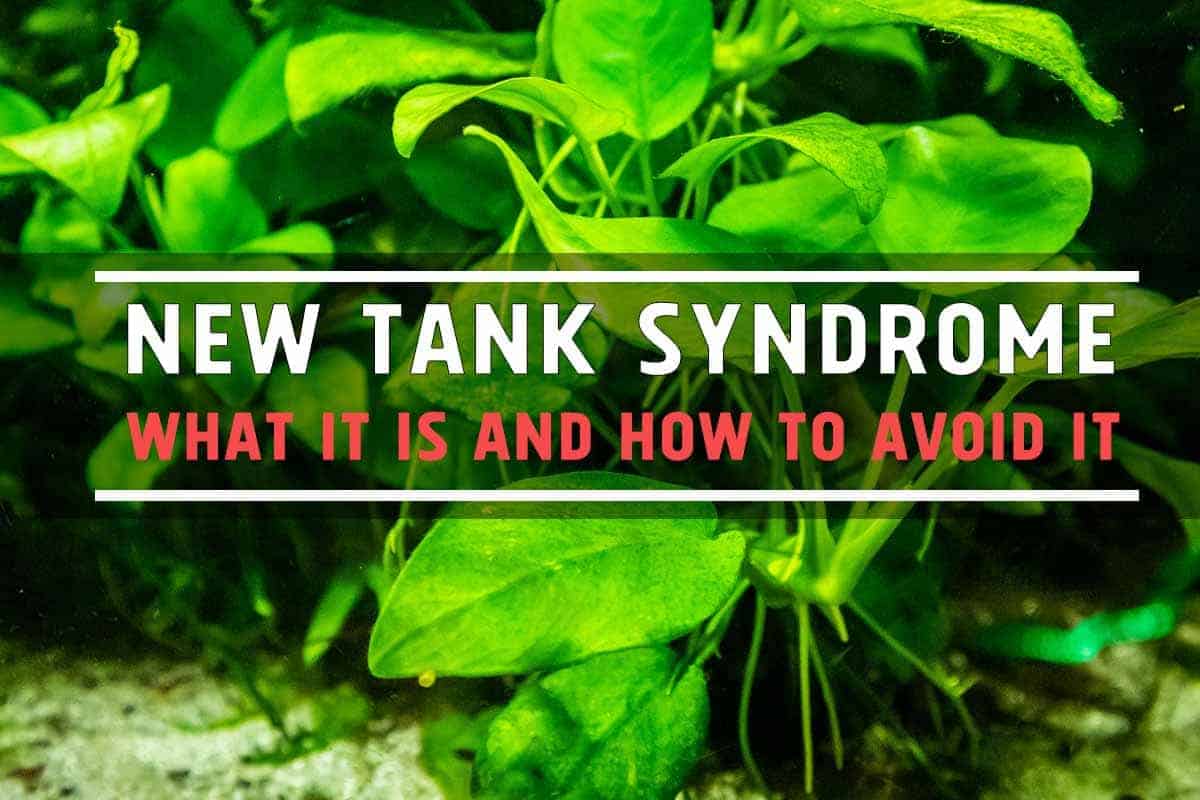 New tank syndrome is among the leading problems faced in aquaria, and lack of sufficient beneficial bacteria populations in the tank plus poor aquarium maintenance contributes strongly to these.

Proper maintenance habits alongside the presence of an established biological filter are paramount to maintaining good water quality and preserving the balance and health of your aquarium.

The role beneficial bacteria play in an aquarium is a huge one as it actualizes the conversion of harmful ammonia into nitrite and then into nitrate, making sure that these toxic compounds do not cause harm to your aquarium animals.

An aquarium without enough beneficial bacteria will most likely suffer from ammonia and nitrite toxicity, and that causes and leads to diseases and increased mortality.

In this article, I will explain what a new tank syndrome actually entails, in addition to its causes, and how to avoid it in aquaria with some time for shrimp tanks.

What is New Tank Syndrome?

In the aquarium hobby, by the term “new tank syndrome” we mean the noxious situation experienced in new or biologically immature aquarium setups.

This condition is indicated by high levels of ammonia and nitrite in the aquarium water, capable of harming our pets.

Remember that aquarists are required to cycle their tanks before introducing varieties of fish and invertebrates. The essence of this is to produce lots of beneficial “nitrifying” bacteria such as Nitrosomonas, Nitrobacter, and Nitrospira in the aquarium to convert toxic ammonia into nitrite and nitrite into nitrate.

For this, a huge number of hobbyists prefer to perform fishless cycling —  cycling or maturing the tank without starter fish. So they just obtain an ammonia source e.g. products like Dr. Tim’s Aquatic Ammonium Chloride, in addition to a mature filter or live rock holding colonies of beneficial bacteria, add it to the aquarium, then wait for some time for the ammonia and nitrite levels to drop to 0 ppm.

Now, because these beneficial bacteria take a while (averaging 4 weeks or more) to proliferate and colonize various surfaces in the enclosure — adding plenty of fish at this point will cause a spike in the ammonia and nitrite level and the existing filter won’t be able to handle it and that would spell doom for your aquarium.

The underlying cause of new tank syndrome is the lack of ample nitrifying bacteria to break down the waste produced by your aquarium pets alongside other sources.

Your conventional filtration unit is incapable of handling all filtration demands, hence you need to ensure that the aquarium is cycled/mature before stocking fish.

Skipping this vital requirement will expose your animals to high levels of ammonia and nitrite, resulting in adverse effects such as nitrite poisoning, extreme stress/shock, susceptibility to diseases, and ultimately— death.

It’s quite impossible to detect elevated ammonia and nitrite levels by looking at the enclosure. Hence the need to test the aquarium water using an accurate test kit, there are lots of aquarium test kits in the markets; so ensure to grab one or two for your tank.

Testing the aquarium water regularly with a good test kit will reveal any impending water quality problem since the equipment allows one to notice changes in the tank’s water chemistry.

Also, your aquarium fish and shrimp will show certain signs hinting at new tank syndrome. Some of these include:

Aside from that, new tank syndrome may terminate the lives of some or even all of your aquarium fish.

As for the dwarf shrimp, they are less tolerant than fish, so it will be even worse in shrimp tanks.

How to Avoid New Tank Syndrome

Seed the tank by adding a mature filter from an already established aquarium.

Use a capable filtration system rated for the size/volume of your aquarium. You should opt for a filter unit with a GPH rating of about 2– 3 times the volume of the aquarium.

For example, for a 10-gallon tank, choose the filter, which is rated for 20 gallons. The difference in money is minimal but the benefit is huge!

Mature the tank before adding animals.

How long does it take for a fish or shrimp tank to mature?

This is a difficult question because none experienced aquarist will ever tell you exactly how long it can take. Everything depends on the tank setup and what animals you are planning to keep.

For example, for fish tanks, it can be from several days to a few weeks, while for shrimp tanks it can be way longer. Some professional shrimp breeders even wait a few months before adding their shrimp into new tanks.

Use aeration devices to boost the oxygen levels in the tank, this is to make it easier for beneficial bacteria to proliferate.

Do not overstock and/or overfeed the tank after cycling to prevent rapid accumulation of waste and consequently, an ammonia spike.

This is especially important for animals that produce a lot of waste (like fish, freshwater crabs, crayfish, frogs, snails, etc.).
Note: Even though dwarf shrimp do not produce a lot of bioload, it will be better to have a matured tank anyway. The point is that dwarf shrimp are scavengers and mostly feed on biofilm and algae that builds up on the sides of the aquarium.

Maintenance is an important part of the aquarium hobby. However, be very careful when you do it in new tank setups.

It is well-known fact that rinsing filter media meticulously will eliminate a great deal of the beneficial bacteria, thus prompting the new tank syndrome or mini-cycle.

You can read more about it in my article “How to Clean an Aquarium Filter”.

Whenever it is possible, avoid using medications such as broad-spectrum antibiotics in the main tank. Instead, transfer and treat your sick fish in a hospital tank.

Important: There are many medications that will recommend you to remove filter media so that beneficial bacteria will not be affected. Do your research before using them!

What to Do In Case of an Emergency

There are 2 main options:

You should only transfer the animals back to the main tank when the water chemistry is back to normal, i.e. when ammonia and nitrite drop to zero.

Keep in mind that not only new aquarium setups are prone to new tank syndrome.

This problem can equally occur in mature or established aquaria due to improper maintenance practices.

Basically, mini-cycle is another name for the new tank syndrome. It is the result of an insufficient amount of beneficial bacteria compared to the existing bioload in the tank.

Here are some of the usual causes:

1. Replacing All The Media at Once:

Never replace all filter media at one time — swapping all media for new ones at the same time eliminates the established bacterial population living in them.

Instead, take out one media and add another, then after several weeks when it’s certain to have amassed a lot of beneficial bacteria, replace the second with new fresh media.

In as much as you might be tempted to clean out everything in your tank — do not do it!

It’s not always advisable to carry out massive changes like:

Doing things like these will eliminate or reduce the beneficial bacteria which took a while to proliferate in your aquarium.

These good (nitrifying) bacteria are important to the health of your aquarium, and they live on every surface in the tank, including the substrate, glass, plants, décor, and aquarium water.

Thus, resist the temptation to carry out a thorough clean in your aquarium or you could lose the colonies of nitrifying bacteria — thereby, paving the way for new tank syndrome.

Cleaning the filter media with tap water is a risky thing to do if you do not know how to do it properly. Read more about it here.

Rinsing the media in a container filled with tap water can kill or render the bacteria inactive. Exposing filter media for too long to chlorine and chloramine can kill the mass of beneficial bacteria present on its surface. As a result, it can cause new tank syndrome.

Instead, you can always make use of dechlorinated water or aged water from your aquarium to rinse the filter media before fitting it back into the filter unit.

Treating New Tank Syndrome in a Fish and Shrimp Tanks

Regular testing of the tank water is key to detecting water quality issues in the first place.

So make a habit of testing the tank water regularly before and after adding livestock. Ideally, the ammonia and nitrite levels should be zero all the time.

Keep in mind that ammonia and nitrite levels above 0 ppm will put your animals in harm’s way. Therefore you should always monitor the water chemistry to know when parameters exceed the safe levels.

If your fish or shrimp tank is affected by the new tank syndrome, carry out the following measures: