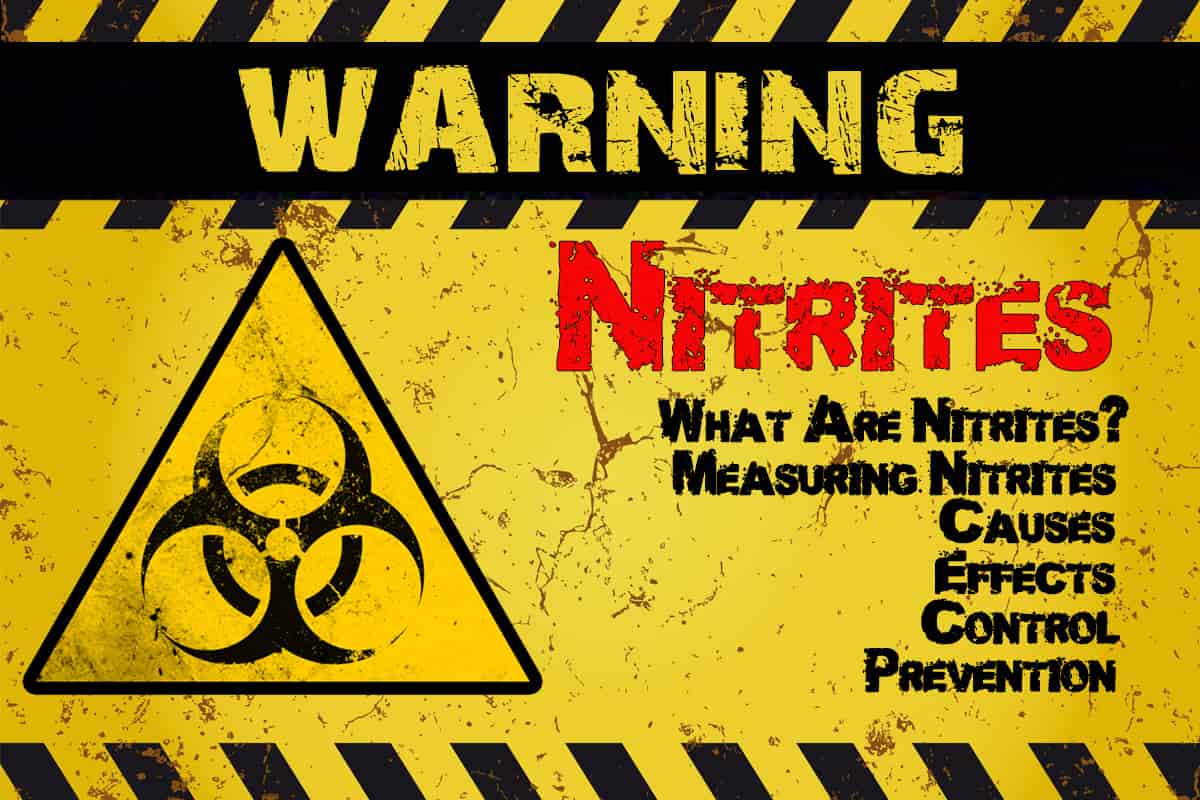 By now, you should be aware that dissolved nitrogenous wastes such as ammonia, nitrites, and nitrates are problematic and detrimental to the health of the tank inhabitants (aquarium fish and invertebrates).

However, the causes of elevated nitrites in aquaria still remain a mystery to many aquarists and I will be glad to walk you through all that you need to know.

If you are familiar with the nitrogen cycle; you should know that a certain type of beneficial bacteria converts the highly toxic ammonia into nitrites, and another type converts nitrites into the relatively, non-toxic nitrates.

In this article, I will explain the common causes of nitrites in the aquarium, as well as how to tackle the problem.

Nitrites (NO2–) are a form of dissolved nitrogen or simply — nitrogenous compounds that occur naturally in aquarium water. This is the intermediate product of the nitrification process: Ammonia – Nitrites – Nitrates.

Ideally, a fully cycled tank should have no traces of ammonia and nitrites. On that account, only nitrates should be present when the aquarium water is tested with a test kit.

The problem arises when there isn’t established/sufficient nitrifying bacteria to breakdown the nitrogenous compounds.

In summary, if there aren’t enough beneficial bacteria to convert it to nitrates; the build-up of nitrites will persist in an aquarium.

The acceptable level of nitrite in an aquarium is 0 ppm — yes, totally zero! Just like ammonia (NH3), nitrites are highly toxic to fish and invertebrates. Thus, it is best not to have traces of this lethal waste in a fish tank.

Tolerance of fish and invertebrates to nitrite varies with species; yet, maintaining it at the lowest level remains the best course of action.

The amount of nitrites in the tank water can be measured using an accurate test kit. There are lots of reputable brands in pet and fish stores, and these include the:

The testing process is easy and straightforward, and afterward, if there are detectable levels of nitrite in the water; appropriate measures should be taken to drive it lower.

High levels of ammonia translate to high levels of nitrite. In aquariums, ammonia is produced by animal wastes, uneaten food, and decaying plant matter. Furthermore, factors that contribute to the accumulation of high ammonia, and consequently, nitrites include the following:

Overfeeding can cause a lot of problems in an aquarium. This directly increases the quantity of leftover food, promotes algae growth, and degrades the quality of the tank water.

Food items that remain uneaten for long periods will rot — thereby increasing the nitrite in the water column when there aren’t enough beneficial bacteria to convert it into nitrates.

The importance of adhering to the right stocking levels cannot be overstated. Keeping plenty of fish and invertebrates in an aquarium increases the production of waste.

Apparently, having too many fish in a tank will cause more harm than good.

Despite the role of live plants in filtration; they equally contribute to the build-up of wastes which raises the nitrite levels.

By this, I mean through decomposing plant materials as well as dead and decaying animals in the aquarium. As these organisms rot, the resulting effect would be an ammonia spike followed by a rise in the nitrite levels.

The filter media being dirty/clogged, weak, or damaged can affect its ability to hold ample beneficial bacteria that breakdown nitrites into nitrates. In addition, it hampers on its cleaning effectiveness i.e. the trapping of wastes and particulate matter in the tank water.

That’s why it is advised to gently rinse or replace the media after a significant period of usage.

Moreover, one should rinse the clogged filter media in aged tank water, not under tap water.

Lastly, do not make the mistake of replacing all the media at once. If you have a pair of filter media; replace one with fresh media, and leave the second in the aquarium till bacteria establishes in the new media.

You can also read “How to Clean an Aquarium Filter”.

When there are little or no nitrifying bacteria in an aquarium, the build-up of nitrites is sure to happen.

This is very common in new, cycling tanks that are yet to establish sufficient amounts of beneficial bacteria on surfaces like the substrate, filter media, plants, décor, etc. As a result, high nitrite surfaces because there is nothing to oxidize the nitrogenous compound. In the hobby, this situation is termed “New tank syndrome”.

Therefore, pending when nitrifying bacteria colonies form in an aquarium, any substantial biological waste will cause a drastic change to the nitrite levels.

Nitrite poisoning is a severe condition that plagues aquarium animals and is caused by a spike in nitrite levels.

Nitrite poisoning occurs when nitrites are transported across the gill membranes, where it acts with hemoglobin to form methemoglobin. This condition makes the blood unable to carry oxygen and leads to hypoxia.

The term “brown blood disease” emanates from the appearance of the blood of a nitrite-poisoned fish; typically brown in color— hinting at high levels of methemoglobin.

Besides this, other symptoms of nitrite poisoning in aquarium fish include:

So make sure to replace about 50% of the present tank water with fresh, dechlorinated, or RO water to decrease the nitrite levels, then add about 1 tablespoon of non-iodized salt per gallon of water to prevent nitrite toxicity.

The next course of action is to increase aeration to boost dissolved oxygen levels in the tank water. In addition, cut back on feeding and abstain from introducing new fish until the nitrite levels return to 0 ppm, or closest to it.

Nitrites also have very toxic effects on shrimp and other crustaceans.

Nitrites accumulate in body fluids and decrease the amount of oxygen available for tissue oxygenation. It can cause anoxia, hyperventilation, and alterations in cardiovascular function, molting problems, and death.

Several studies have shown that shrimp that live in waters with ammonium and nitrite accumulations that change significantly will inhibit the physiological processes associated with weight gain.

Note: As I mentioned in my article “Nitrates in Shrimp Tank. How to Lower them” a small percent of the total nitrate intake is converted to nitrite by bacteria in the stomach of the shrimp and accumulated in eyestalk. So shrimp intestines are unable to absorb nutrients optimally which caused the shrimp not to gain weight.

Therefore, declining water quality in our aquariums will cause stress to the shrimps and cause failure in shrimp enlargement, diseases, and death. It is absolutely crucial to manage water quality properly and appropriately.

5. How to Eliminate High Nitrites

If you detect high levels of nitrate in your aquarium, you can combat it by employing these measures:

Here, you are directly replacing a large percentage of the tank water with clean, dechlorinated water in order to reduce the concentrations of nitrite in your aquarium.

Depending on the nitrite levels, perform large, partial water changes, up to 50% at first, followed by subsequent water changes of about 10% every day to drive the nitrate levels down significantly. While at it, gently vacuum the substrate to get rid of detritus that contribute to the nitrite problem.

Note: Keep in mind though that shrimp do not like large water changes. It stresses them out and can lead to molting problems. You need to understand the risk and choose the lesser evil in your situation.

You can also read – “How to Do and How Often to Do Water Change in Shrimp Aquarium”.

Despite the effectiveness of this measure, it is not a permanent fix. Thus, you should work on increasing the population of nitrifying bacteria in your aquarium.

At this juncture, it would be wise to add a bacteria starter.

Simply obtain bacteria starter culture from your pet store or local fish store and add it to your aquarium.

Be sure to follow the right dosage and allow a few weeks for it to become established in your tank. Additionally, It’s best to suspend activities such as partial water changes, disease treatment, filter cleaning/replacement, and gravel vacuuming within those weeks.

There are many really good products on the market, for example (links to Amazon):

6. Preventing the Build-up of Nitrites

Nitrites accumulate in the tank water when the population of nitrifying bacteria cannot keep up with the organic waste produced.

Essentially, you can keep the waste levels considerably low if you stick to an appropriate feeding schedule and clean the aquarium from time to time.

Apart from that, you should adhere to the right stocking levels, since overstocking can cause the ammonia and nitrite levels to explode and the beneficial bacteria in your aquarium will eventually become overwhelmed.

It doesn’t end there; preventing nitrite build-up involves much more. By performing regular, partial water changes, vacuuming the gravel, and cleaning the filter periodically; you are actually getting rid of impurities/waste in the tank water, aquarium substrate, and filter media. Undoubtedly, these maintenance activities will reduce the likelihood of encountering raised nitrite levels in an aquarium.

Nitrites and ammonia are two toxic compounds that often lead to morbidity and demise of aquarium fauna.

Experiments evaluating the toxicity of nitrites in fish and shrimps indicate that nitrites particularly affect osmoregulation, molting frequency, and survival. At extreme levels, nitrites will make life unbearable for most animals in aquariums.

Ultimately, conscious efforts should be directed towards the prevention of high nitrites in the aquarium, since a spike will sicken your pets or even worse, claim their lives.

4 thoughts on “Nitrites in the Aquarium: Causes, Effects, and Control”