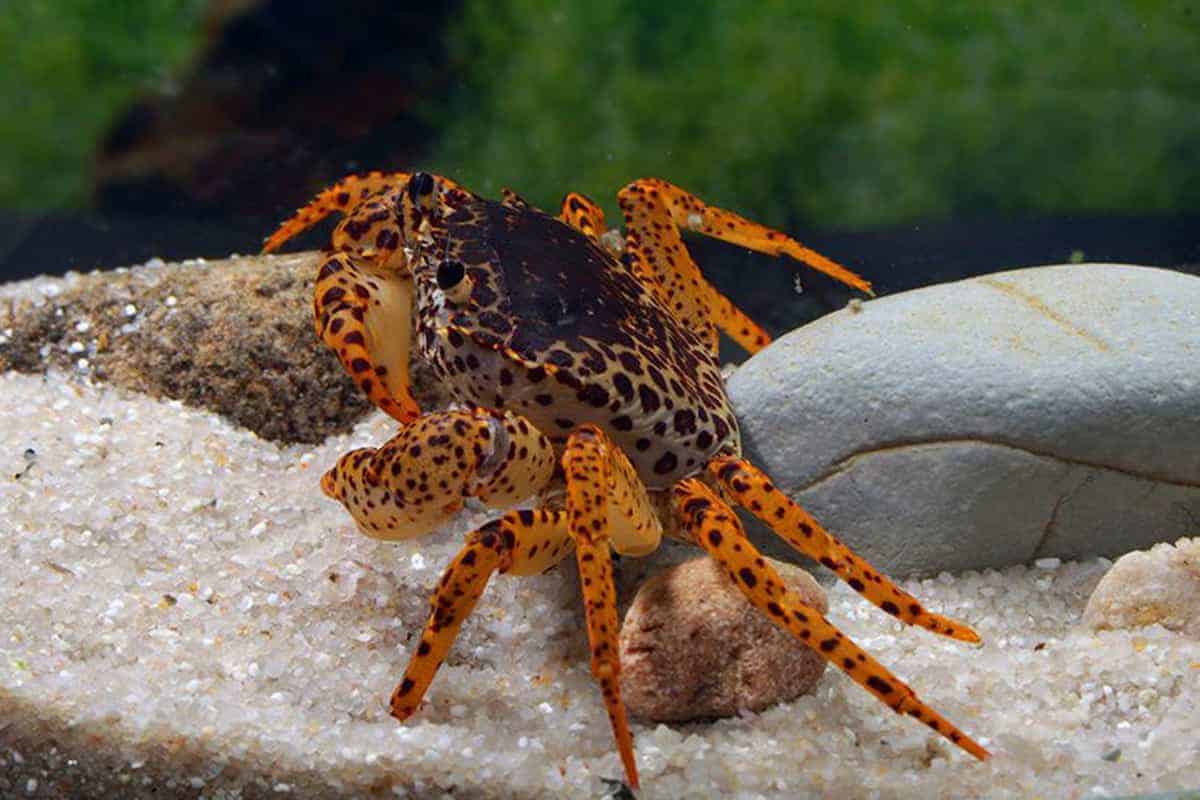 The Panther Crab, also known as Parathelphusa pantherine or the Leopard Crab, is a fascinating animal and a great albeit somewhat uncommon addition to a home aquarium. Panther crabs are a variety of freshwater crab officially named in 1902.

Despite their shy disposition, these crabs have delighted fish and crab keeping enthusiasts around the world. The Panther crab does require a moderate amount of background knowledge to thrive in captivity, but with the right attitude and attention to detail, even novice crab owners can learn to care for these beautiful creatures.

In this article, I will go over everything you need to know in order to care for Panther crabs in a home aquarium.

Quick Notes about the Panther Crabs

In the wild, the Panther Crab can be found on the Indonesian island of Sulawesi. Panther crab populations are concentrated in and around Lake Matano, though they have been found in the areas south of the lake as well.

Description of the Panther Crabs

The color of the Panther crab can range between yellow, light orange and brown. They often have brown and red markings on their bodies and most Panther crabs have dark red rosettes extending from the carapace to the legs. It is also common for Panther crabs to have red tipped claws and legs, though it should be noted that many Panther crabs show no red coloration at all. The Panther crab is a relatively large crab for a freshwater species and can reach sizes up to 3 inches/ eight centimeters wide across the carapace (not including legs).

According to the study, Panther crabs can live up to 10 years! Unfortunately, in captivity, they can barely live 3 – 5 years.

The Behavior of the Panther Crabs

While the Panther Crab can make a wonderful and rewarding pet for a dedicated carer, prospective owners should know that they do have a somewhat aggressive temperament. This is especially important to note if you plan to keep multiple crabs in the same tank. 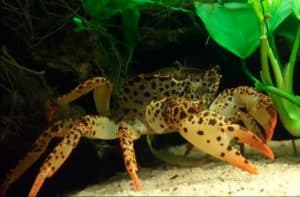 Panther crabs are very territorial and require a lot of space to cut down on their naturally aggressive temperaments. If you plan to breed Panther crabs, the successive generations raised in captivity will likely be mild-mannered than their wild counterparts.

These crabs do not dig deep burrows, they usually like borrowing small holes under things.

Finally, the Panther crab is a nocturnal animal and will be considerably more active at night.

If you plan on placing your crabs into tanks with plants, you should be aware that Panther crabs will view them as food and are highly skilled at uprooting and consuming plants. Tough plants such as Java ferns can withstand their attacks, but most others will be destroyed by Panther crabs.

Note: However, they are not that destructive as crayfish. So, there is still a chance that they will leave alone at least some of your plants.
Tip: You can always use floating plants. 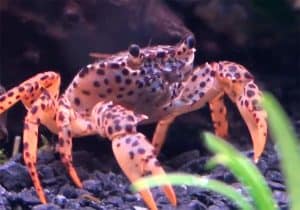 Like most other crabs, the Panther crab is an omnivore and eats a widely varied diet. Panther crabs can make great “janitors” as they will consume leftover scraps of food as well as algae and detritus in the tank.

These crabs like diversity in food. The reason for this is simple, almost all Panther crab in the wild have some plant matter in their diet, and as good as prepared fish/shrimp/crab foods have become, most do not offer much in the way of plant matter to them. Therefore, carrot, zucchini cucumber slices, etc. will be a great choice to feed them.

Note: Any medication that contains lots of copper should be avoided as copper is deadly to invertebrates. However, it is also necessary for the blood system. Read more about it in my article “How Copper Affects Dwarf Shrimp”.

You can read some of my related articles (the principle is the same with crabs):

Indian almond leaves and Alder Cones.
How to Blanch Сucumbers and Zucchini for Shrimp.
How to Enhance Shrimp Color?

While many sources indicate that Panther crabs are fully aquatic, it is still a good idea to provide them with some land area in the form of rocks or wood that jut out of the water to give them the option to emerge from if they so choose.

Note: In the wild, these crabs are shore dwellers, so an amphibious environment is best for them to thrive. However, I repeat, this is not mandatory. 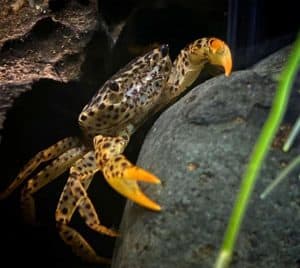 Like many other species of freshwater crab, it is extremely important to provide hiding places for your crabs to feel safe. These crabs are very vulnerable during molting time and they can also be somewhat territorial, so a safe retreat is essential for your Panther crab’s environment.

Being somewhat large for a freshwater crab, the Panther crab requires a substantial amount of space in their aquarium- approximately thirty-two inches or eighty centimeters per animal. A large tank size can also help to mitigate aggression among Panther crabs and is especially important if housing multiple males in the same tank.

Tip: Covered aquariums are highly recommended as Panther crabs have been known to escape uncovered tanks.

The water parameters in the shallows of Lake Matano

An ideal well cycled tank environment should mimic the conditions of Lake Matano as closely as possible. An ideal pH level should be at or near 8.0 and temperature should range between 27 and 31 degrees Celsius (or 80 – 88 degrees Fahrenheit).

Do not forget that they need careful acclimation (read more about it here) as all invertebrates.

To replicate the conditions of Lake Matano, and control the quality of your water, you need to use RO/DI water and remineralizers (Salty Shrimp Sulawesi Mineral 8.5 and Salty Shrimp Mineral 7.5 check the price on Amazon). Unfortunately, this is the major mistake when it comes to keeping Panther crabs. Sure, they can live even in tap water but their lifespan will be reduced drastically! 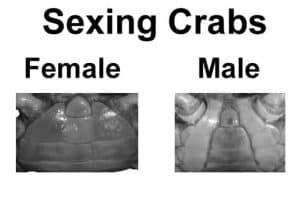 Sexing Panther crabs can be somewhat difficult for the untrained eye, but there are a few indicators that give away the sex of the animal. To sex a Panther Crab, you will need to handle them carefully in order to get a look at the underside of the crab.

Males have a thin flap on the underside of the belly, while females have a larger, rounder flap. The abdomen plate of the male in general is much narrower than that of the female.

Breeding Panther crabs can be tricky because of their territorial nature, but it is very doable in a home aquarium. As mentioned previously, it is very important to maintain a good ratio of males and female Panther crabs for their safety.

Panther crabs become mature when they are about 5 cm (2 inches) long. When female panther crabs release pheromones, it can send the males into a frenzy and endanger the female if there are too many males in the tank.

Keeping an extremely clean tank is especially important if you are looking to breed Panther crabs, as it minimizes the opportunity for opportunistic bacteria to grow and makes it easy to observe the eggs. Some breeders incorporate deep sand bed into the tank to provide a place for females to safely lay eggs.

After hatching, baby Panther crabs should be separated from adults. Of course, you can also move berried female into the rearing tank and return her back after hatching. The reason for this is the cannibalistic habits of the crabs. 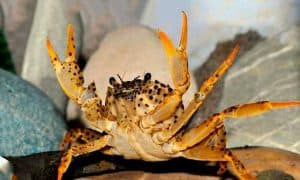 As previously stated, Panther crabs are very territorial, and it can be risky to house multiple animals in the same tank. Males, in particular, are extremely likely to fight and eventually kill one another when housed together. Ideally, crabs are usually better in solitary confinement. Multiple Panther crabs should be kept in groups of one male with multiple females.

Do not keep them with other crabs from Lake Matano (for example, Matano crab). There will not be peace between them.

Additionally, you should take care to ensure that the crabs have more than enough food to prevent competition between the animals and reduce aggression.

Panther crabs are not fish predators per se but are opportunistic fish scavengers and will consume fish that are small, defenseless, or weak. In general, it is difficult to house fish with Panther crabs since small fish will likely be eaten by the Panther crab, whereas larger fish may damage the crab during its molt. For this reason, it is best to house Panther crabs in their own species-specific tank.

Note: Thing is, most fish are most vulnerable at night while resting near the substrate and that is exactly the time Panther crabs are most active.

Crayfish and crabs are pretty aggressive. That is why it is all about refuge and territory. Depending on the size of your crayfish or crab, each of them can become a snack.
Personally, I would not recommend to keep them together.

Regarding shrimp, for example, Cardinal shrimp (they also live in Lake Matano), they will be OK, as long as they are fast enough to stay away from the Panther crab.
Crabs should not be trusted with anything smaller it can catch.

In conclusion, Panther crabs can make a fantastic addition to the home aquariums of dedicated crab keeping enthusiasts.  While Panther Crabs can be more challenging than other crab species to raise in captivity, the results are quite rewarding.

With a bit of research and investment of time and resources, anyone can recreate the ideal conditions for a Panther crab to thrive in their home. These animals may be endangered in their natural habitat but keeping them in captivity is a great way to ensure that the species is preserved for posterity.

link to How to Clean and Disinfect Used Aquariums and Accessories

Continue Reading
link to What Do Crayfish Eat?