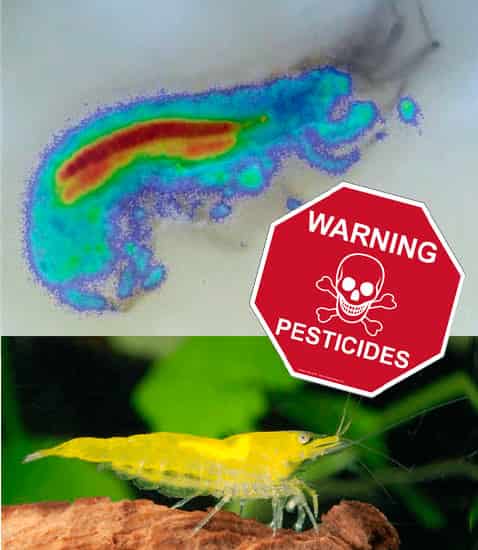 In general, pesticides are any chemicals used to control or kill pests such as fungi, weeds, bacteria or other pest species in aquatic, agricultural and urban environments. Pesticides are designed to kill specific pests. Unfortunately, they also affect non-target organisms…such as dwarf shrimp in our case.

Unfortunately, almost all pesticides are extremely dangerous to dwarf shrimp. They can wipe the shrimp colony in a matter of hours in the aquarium. The only way to prevent it is to quarantine the plants for a long period of time. Of course, there is a shorter way – test toxicity on some of your shrimp. Any other method will not guarantee safety.

If you think that this problem is not crucial for shrimp or fish-keeping hobby, well you are wrong. The problem is very serious because a variety of pesticides enter surface waters after application due to spray drift, leaching or run-off from fields and spread everywhere. For example, diazinon was found in stormwater runoff in both agricultural and urban zones (Domagalski et al., 1997 and US EPA, 2005).

In addition, it has become apparent that some aquatic plants may be treated with pesticides that may cause shrimp fatalities. In summary, it is suspected that plants imported from Asia are most at risk. This is due to the majority being grown outdoors in an environment that may be highly populated with pests.

Some types of pesticides dangerous to the dwarf shrimp

The impacts of pesticides on shrimp aquaculture is the subject of many studies, actually. We do not need to look into all scientific details but we can use the results of those researches.

Note: You can also check Pesticides Database  (studies specifically with crustaceans) to see the effect of this or that pesticide on the shrimp. 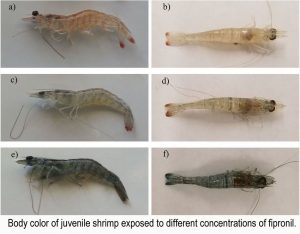 The point is that some aquarium plants contain residues of fertilizers or pesticides which are often used in the breeding farms for aquatic plants in the aquarium for pest control against snails or lice. Many of these pesticides, especially herbicides and insecticides, contain organochlorine compounds which are lethal for the shrimp.

The shrimp also showed higher susceptibility to herbicides and pesticides (such as diazinon, imidacloprid, propiconazole etc.) All of them can be deadly for the freshwater shrimp and pond snails, for example:

Example of Toxicity of six pesticides to dwarf shrimp 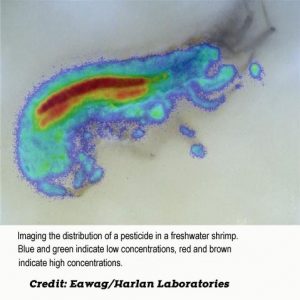 Generally, synthetic organic pesticides work by preventing the normal transmission of nerve impulses in the organisms. In shrimp, this results in tremors, convulsions, paralysis, and death. Since generally, the vital activities of shrimp are similar to other members of the animal kingdom. What are toxic to shrimp will also likely be toxic to fish with differences only in the degree of toxicity.

Toxicity of six pesticides (carbaryl, chlorpyrifos, cypermethrin, dimethoate, diuron, and fenarimol) to the freshwater shrimp was assessed after 96 h exposures. Of the six pesticides tested, alpha cypermethrin was the most toxic to the shrimp followed by chlorpyrifos, carbaryl, dimethoate, fenarimol, and diuron. Regression methods for predicting chronic toxicity (lethality) from acute lethality data with shrimp were developed and compared, and it was found that the log–log model gives the most reliable predictions of the probability of death as a function of extended exposure times. (Toxicity of selected pesticides to freshwater shrimp, Paratya australiensis (Decapoda: Atyidae): Use of time series acute toxicity data to predict chronic lethality. Ecotoxicology and Environmental Safety Volume 73, Issue 3, March 2010, Pages 360-369)

Unfortunately, nearly all insecticides that are toxic to insects will also be toxic to shrimps, and this will include organochlorines, organophosphates, pyrethroids, neonicotinoids, etc.

These systemic pesticides can be stored by the treated plants for up to several weeks. If you put the plants in the aquarium after purchase, pesticides such as chlorinated hydrocarbons dissolve and enter the water. Although these usually cause no direct damage to fish, they can be fatal to shrimp or crayfish even in small concentrations.

Unfortunately, in most cases, sellers do not know the source and cannot guaranty that the plants are free from pesticides.

After all, chlorinated hydrocarbons that are released into the aquarium after planting have a primary effect on the central nervous system. The uptake takes place primarily via the gills and insecticidally contaminated feed via the intestinal tract. If poisoning occurs, the animals usually die within a few minutes to hours, depending on their toxicity.

In case shrimp survived, it was possible to detect permanent damages, especially in the adipose tissue of the musculature, as well as a delayed growth.

What should you do when you have just added the contaminated plant and your shrimp start jumping and swimming in all directions?

Note: AT Nano-Life binds harmful substances such as copper, pesticides, drug residues, chlorine, and other heavy metals on a natural basis.
Unfortunately, the recovery chances of clearly poisoned shrimp are very low but it does not mean that you should not try to save them.

As described above, pesticides can stay on treated plants up to several weeks. Therefore, you should not put newly purchased aquarium plants into the shrimp aquarium right away. Take precaution measures first: 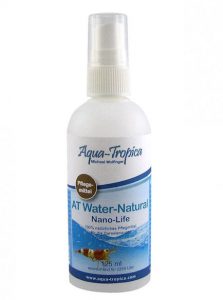 After planting in the aquarium, it is advisable to keep an eye on the behavior of the shrimp for a few hours. For safety’s sake, add one more dose of AT Nano-Life to the aquarium water to completely neutralize even the last residues.

Note: AT Nano-Life is amazing stuff. It is the first aid when it comes to unexplained shrimp deaths. It binds substances such as copper, pesticides, drug residues, chlorine, and other heavy metals within a very short time, so toxins are quickly rendered harmless. Nano-Life also adds minerals and trace elements and inhibits harmful bacteria from growing. Unfortunately, you can find it only in Germany so far. So, instead of  AT Nano-Life we will use Seachem Prime.

In most cases, people are impatient and do not want to quarantine and wait that long. In this case, the proper way to introduce plants into your aquarium is to sterilize them first, to avoid the introduction of snails, parasites, or pathogens. Unfortunately, sterilization cannot guarantee 100% safety.

7 Steps how to properly clean your new aquarium plants from H2Oplants. 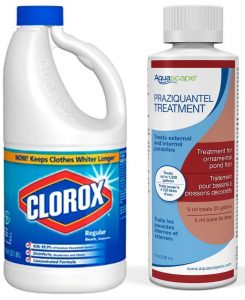 Note: some plants can be very sensitive to bleach, for example, floating plants or Vals such as Jungle Val. In this case, reduce the time to 1 minute in the bleach solution.

Even if you have done all precautions (Quarantine and/or disinfection), there is still a potential hazard if the pesticides/insecticide has been up-taken by the plant. That is why some shrimp breeders advise testing for toxicity in the plants. So before adding them to an established shrimp tank, use a “sacrificial” shrimp or two.

Pesticides are not the only problem for the aquatic community. A lot of people use fumigators, traps for insects, etc. in their houses. These chemicals remain in the air for a long time. As a result, they get into the aquarium water column and depending on the concentration can either harm or kill the shrimp. In such a situation, it is best to remove the aquarium outside the treated area.

Do not use sprays near the aquarium during cleaning. Nonetheless, if for some reason you have to use such substances near the aquarium, you will need to cover it and filtration system to prevent the toxins from entering the water. Hold them closed for at least 3-4 hours.

Once in a while, many shrimp breeders feed their shrimp with zucchinis, cucumbers, lima beans, carrots, cabbages, and etc. Remember that they can also contain pesticides. Do it the right way. Peeling and cooking will remove all traces of pesticides.

There are countless cases when people have lost shrimp or fish due to pesticides and many of the leading shrimp/fish experts, keepers, breeders on the field advocate using plants only from trusted sources (like InVitro, Aquafluer, Tropica, and some others). The trade-off here is that they are relatively expensive.

If you keep shrimp and are receiving plants from somebody else then I would advise asking where they are sourced. If they are imported from Asia then speak with the vendor and try to ascertain what or if any quarantine measures have been undertaken.

A thorough rinse under freshwater is apparently not enough to ensure any pesticides have been removed. Even if this is done, the insecticide could have been up-taken by the plant.

Do not underestimate the importance of quarantine.