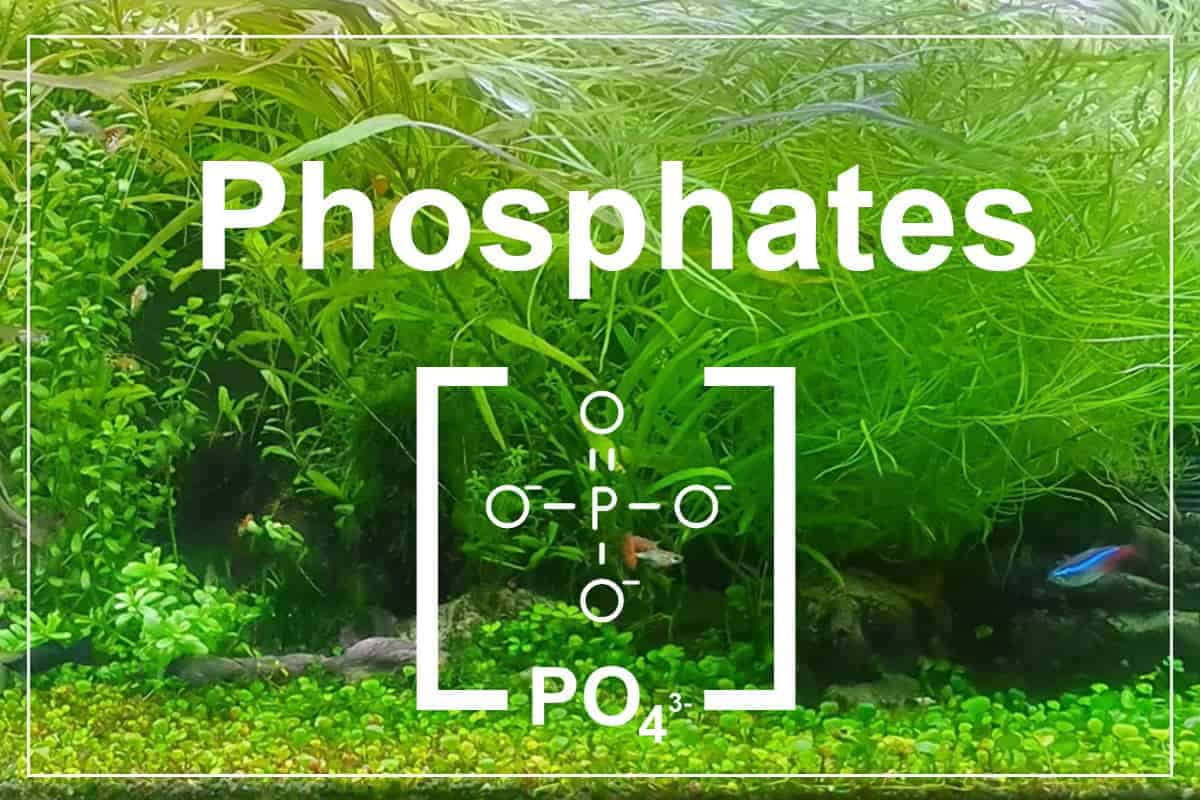 So, what are phosphates? Are they good or bad? Do we need them in our freshwater tanks? What role do they play in our systems? What is the function of phosphates in plants? Are they harmful to fish and shrimp? Should it be like everything else, a balance?

In short, phosphates in freshwater tanks play a very important role in good plant growth. Also, they are not harmful to the livestock, so you should not be worried too much.

If you want to know more about phosphates, in this article, I will go over all the above mentioned and some other questions.

What are Phosphates (PO4)?

Phosphate is the natural form of phosphorus which is a nutrient used extensively by all organisms (animals and plants) and is often the limiting nutrient for growth.

Phosphate is required for the biosynthesis of nucleic acids, basically, it is a backbone of all genetic material (RNA and DNA).

Keep in mind that there will never be free phosphorus in an aquarium. It is always combined with something. In water, phosphorus is transformed into orthophosphate and is available for use by algae and other aquatic plants for growth.

Note: Phosphates are the naturally occurring form of the element phosphorus, and Orthophosphate is the simplest form (dissolved form) of phosphorus.

In aquariums, phosphates usually make the water a little bit softer and more acidic due to the higher concentration of hydrogen atoms and organic molecules.

In some cases, it can be even beneficial to some degree, because some dwarf shrimp species (most Caridina species) and fish (for example, New World Cichlids, Tetras, etc.) prefer softer and more acidic water (low pH).

Are Phosphates Good or Bad in Freshwater Tanks?

Phosphates cannot be good or bad; they are a natural part of any system, including our freshwater aquariums.

However, unlike copper or lead, even elevated phosphate levels should not scare you too much. It can become an issue only when your plants do not grow.

You can also read my article “How Copper Affects Dwarf Shrimp”.

What is the Function of Phosphates in Aquatic Plants?

Phosphates are absolutely necessary in a planted tank for good plant growth. They play a vital role in energy transfer (from shoots to roots or from roots to shoots) and in the mechanisms of photosynthesis.

So, reducing phosphates to 0 will be a huge mistake and definitely lead to nutrients deficiencies in aquatic plants.

Without them, all the plants in the tank will have stunned growth. In addition, you may notice that the leaves will begin to yellow or even may show purple coloring. The symptoms can appear in both new and old plants.

Ideally, the phosphate levels in freshwater tanks should be in the 0.05 -1.5mg/l range.

You can read more in my article “How to Spot Nutrient Deficiencies in Aquatic Plants”.

Aquatic plants need a lot of different micro and macronutrients for healthy growth. For example:

According to multiple studies, plants also have thresholds of nutrient limitation. These thresholds also depend on other nutrients.

As a result of many tests and experiments, aquarists noticed that the aquarium water often tested about 1 part phosphates to 10 parts nitrates and their plants performed best at this ratio. So, the Nitrate and Phosphate ratio (10:1) became quite popular.

After that discovery, many aquarists also started using this ratio as a proxy to measure the phosphates by only testing nitrates.

Exceptions to the 10:1 Nitrate and Phosphate Ratio

However, this ratio is only a guideline. Do not take it literally because different aquatic plants have different needs! In addition, different setups can also have more phosphates than nitrates.

For example, if the substrate or water itself contains phosphates, this ratio will not work. Also, nitrates are removed from the aquarium by evaporation; phosphates do not evaporate. This explains how the levels are not always proportionate upon testing.

Therefore, it is absolutely fine to start with the ratio, but in the end, only the reaction and behavior of your plants and algae should be your guide.

For example, if the plants are using up all the nitrates (nitrogen), then they are also using up all the phosphates. So, if your plants stopped growing while your tank still has nitrogen and phosphates it can be a sign of nutrient limitation.

Additions of phosphate can greatly increase the uptake of nitrogen in a planted aquarium by several times! As a result, you may have to increase phosphate or nitrogen levels, etc.

Only tests and experiments can tell what works best for this or that particular tank setup and there is no other way around it.

Do Phosphates Cause Algae?

There is a very popular belief that in freshwater aquariums excess phosphates contribute to algae growth and tend to cause algae outbreaks (like Green algae, Green hair algae, Black beard algae, etc.).

In reality, it is yes and no at the same time.

At that time, the processing of used water did not remove them. As a result, when the water was released into rivers and streams the algae started to grow like crazy.

The researchers immediately blamed the phosphates and the topic was closed for a long time.

It is true that algae also need phosphates, the only problem is that they do not need that much!

After lots of experiments, many aquarists have demonstrated repeatedly that having 2x, 3x, 4x (and more) as much phosphates in the planted tank – do not cause algae problems!

I repeat, excess phosphates alone do not cause algae unless they are out of proportion to a massive degree.

So, now you might wonder, hold on, but what about your example where the algae started to grow like crazy?!

Because those numbers were extreme they caused a severe change in water chemistry (not just phosphates) that affected the algae growth.

The point is that algae need very little nutrients, algae cannot absorb more than they are capable of. Basically, phosphates are like a nutrient trafficking bottleneck.

The main cause of algae is an imbalance of nutrients. Usually too much light, CO2 fluctuations, or a complete mismatch of other nutrients. Therefore, the problem of phosphates and algae is way exaggerated in freshwater aquariums.

Are Phosphates Harmful to Fish and Shrimp?

Over the years in this hobby, I have read hundreds of different studies and I have never seen anywhere that phosphates can cause problems in shrimp or fish. I have never experienced it in any of my tanks nor do I know anyone who can prove that.

Phosphates are not toxic to fish or shrimp. In theory, the only time they can become an issue is when they are so high that it is similar to salt stress.

Salt stress can happen when the phosphate builds up in the animal tissues and binds to calcium. This causes calcium levels to decrease, which may weaken the bones of the fish or exoskeleton of the shrimp and cause molting problems.

Should we worry about it? I don’t think so and there are several reasons for that:

Therefore, even when your phosphates are 1 – 10 ppm, they will not harm your pets.

If your phosphates are way higher, it means that there are serious problems with your water quality (not just phosphates) and you have to look for another problem and you will certainly find it.

You can also read “How to Supplement Shrimp and Snails with Calcium”.

Sources of Phosphates in our Tanks

Phosphates enter the aquarium system in many ways:

If you do not add phosphorus in any other form into your tank, then the main source of phosphorus is fish food.

Keep in mind that phosphorus is an integral ingredient of the biomolecules in tissue-based foods and cannot be removed. Also, manufacturers often show phosphorus instead of phosphate as the unit of measure. That is a little trick, because values of phosphorus should be multiplied by 3.066 to equal phosphate.

Unfortunately, most aquarium test kits are only able to test the inorganic phosphate levels. Obviously, it creates a certain problem for our hobby because we do not get complete reading.

Also, many test kits that have color scales are very hard to read and you may be misled into believing that you do not have phosphates.

In addition, many phosphates test kits are not accurate because they are not calibrated with known concentration solutions of PO4.

Lastly, the tests will not show you the presence of phosphates in the substrate. 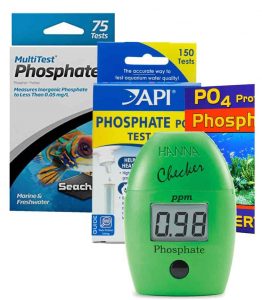 Nonetheless, despite all these downsides, they are not completely useless and can give us at least approximate numbers.

Some examples, check out the price on Amazon:

How to Remove Phosphates From Aquarium 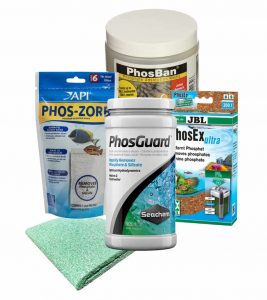 1.  Filter media materials for the removal of phosphate from aquarium water. For example (links to Amazon):

Using pH buffers, which contain carbonate atoms and in turn “harden” the water

Fast-growing plants require a lot of nutrients for growth. Ideally, they should absorb nutrients from the water column (for example, Hornwort, Duckweed, Water Sprite, Water Wisteria, Frogbit, etc.).
However, If you use root tablets that contain phosphates, in this case, you need root feeders (obtain their nutrients from the substrate).

The surest and simplest way is old-fashioned aquarium water changes. Do not forget to vacuum clean. Collect any waste particles and debris that you can see this will help avoid phosphates building up.

How to Keep Phosphates Low in the Freshwater Tank?

Considering the fact that there are so many sources of phosphate. It can be really hard to keep phosphates where you want them to be. Nonetheless, some basic rules will help you with that.

There are many products on the market that are considered “safe for aquaria use” do have added phosphates as a listed ingredient.
Therefore, check everything that you are using. Read your labels choose the ones lowest in phosphates.

Food is the number one source of phosphates in your water. The more you add the more phosphates you will have eventually.

Remove any bits that are leftover.

Generally, phosphates in freshwater tanks should not freak you out and assume you have to do anything. Unless the numbers are extreme, they do not really have any impact on your tank.

2 thoughts on “Phosphates in Freshwater Tanks”