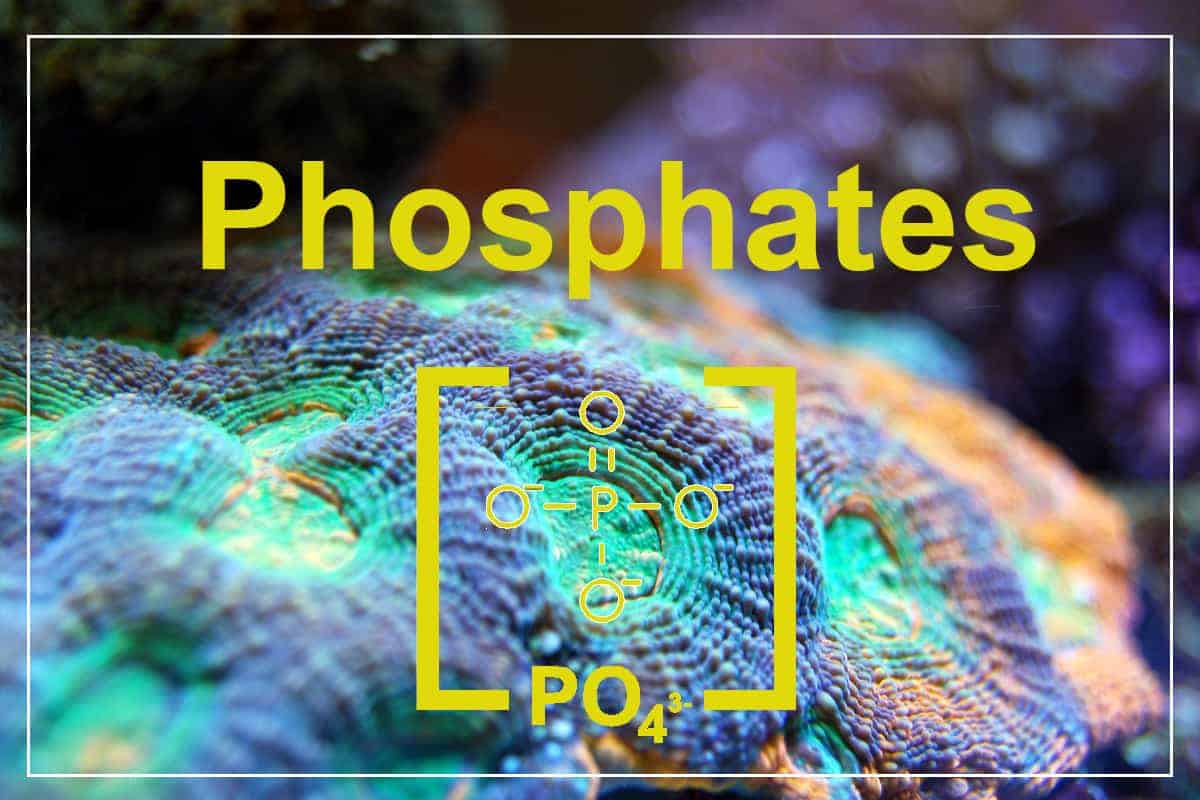 Proper testing and regulation of water parameters are key to the good health and the long-term success of your captive saltwater ecosystem.

One of the vital water chemistry elements in reef systems and aquatic environments, in general, is phosphate— a compound of phosphorus— which is present in all life forms and actively supports the growth and development process.

When they are maintained at the right level, phosphates benefit the coral growth, promote deeper coloration, improve tissue production and the rate of calcification in corals. At the same time, low and high levels of phosphates will cause the opposite result.

Due to this, reefkeepers should be highly conscious of the present situation of their reef tanks’ water chemistry and they should strive to engage in routine maintenance practices. This is the way to go because saltwater and reef tanks rarely forgive mistakes.

Now, the problem arises when there is an excess amount of phosphates in the reef aquarium water. This often leads to bad conditions such as the proliferation of algae, poor growth and coloration of corals, and inhibition of calcification in coralline algae, calcareous macroalgae, and hard corals.

Anyway, optimal phosphate level should be maintained in the reef tank at all times to keep your critters happy and stress-free.

In this article, I will discuss the forms and sources of phosphates, in addition to a variety of methods aimed at the control of phosphates in reef tanks.

Furthermore, inorganic phosphates or orthophosphate are compounds that contain both phosphorus and oxygen atoms — one central atom with four oxygen atoms.

The ideal phosphate level should be ≤ 0.05 ppm (or at least ≤ 0.1 ppm) and values greater than this may promote the growth of unwanted algae in the aquarium.

Note: If you are new to this hobby, keep in mind that it can be really hard to hit such numbers during the first year. So, don’t panic, you will get there once the tank is established and matured.

Problems of Phosphates in a Reef Tank

Even though phosphates will not affect your fish, snails, shrimp, etc., they can cause other problems.

Algae Blooms – Phosphates can cause increased growth of algae. Also due to the fact that algae do not require a lot of nutrients, phosphates in the water are one of the bottlenecks of algae growth.

Note: Some reefers may say that they still have algae even though there are no phosphates in their tanks. Actually, the explanation is pretty simple. Algae uptake phosphate before it has a chance to accumulate.

Coral Appearance – Low and high levels of phosphates can cause browning of corals.

Inhibit Calcification – Too much phosphate slows down coral growth and can directly inhibit calcification in stony corals and coralline algae, while no phosphate (or very low levels) can starve corals. In addition, according to the study, phosphate deficiency can also promote coral bleaching.

Sources of Phosphates in a Reef Tank

Essentially, phosphates are able to surface in the reef aquarium water through diverse sources which include:

Are you aware that the food which you serve your saltwater fish, coral, and other invertebrates contains a substantial amount of phosphorus?

Having said that, fish food flakes, pellets, dry or frozen foods are rich in phosphorus and they can raise your phosphate level greatly.

Additionally, many canned and frozen seafood are preserved with inorganic phosphate salts which are capable of increasing the phosphate level of the aquarium water. So make sure to rinse the food before adding it to the aquarium.

The phosphorus content of different food items vary, therefore it would be ideal to opt for food with low phosphorus content to avoid loading your aquarium water with excess phosphate.
Note: If you feed things like frozen foods you will need to thaw and thoroughly rinse them before adding them to the reef tank. The point is that the water with the frozen food often contains a lot of phosphates after thawing.

This way you will remove some extra phosphates right from the beginning.

Another potential source of phosphates; tap water in its normal, unfiltered form holds concentrations of phosphates. This can either be high or low depending on the water treatment method of the water management authority in a given locality.

In any case, it is never recommended to use tap water in reef tanks!

This concern emphasizes the need for a RO/DI filter system; since it aids in eliminating impurities and pollutants including phosphates from the tap water through processes of “reverse osmosis” and “deionization”, thus making the water safe and fit for aquarium usage.

Note: It could also be in your RO water! So don’t forget to change your RO filters regularly.

The critters in your tank will constantly offload their waste into the tank water.

This adds some amount of nitrates and phosphates right into your aquarium water and the levels will rise.

Also, keep in mind that overfeeding directly translates to an increased release of phosphates through uneaten food and waste. Hence, feed your aquarium fish sparingly.

Methods of Reducing or Limiting Phosphates

This method involves the use of an efficient skimmer in your reef tank.

The protein skimmer is great for removing high concentrations of dissolved compounds like phosphates and nitrates as well as particulate organic matter from the aquarium water.

The only downside is that using an efficient skimmer in your reef tank helps in reducing organic phosphates and nitrates, and improving the overall quality of the aquarium water. It does not reduce inorganic phosphates.

The concept of growing bacteria in the reef tank aims at providing an export mechanism for the high phosphate concentrations.

To achieve this, add carbon sources to the aquarium water. Carbon sources comprise ethanol/vodka, sugar, or vinegar; any of these can cause bacteria to grow and multiply in your reef aquarium.

Within the period of their growth, they will constantly take up phosphates and nitrates from the aquarium water to build their cells. Excess bacteria are subsequently eliminated by means of skimming.

Growing macroalgae is a great and inexpensive way of reducing the phosphate and nitrate levels in reef aquaria.

Cultivating and harvesting a large amount of fast-growing macroalgae in your tank’s refugium can reduce phosphates and other nutrients substantially.

Species of seaweeds that are best suited for phosphate export are Caulerpa, Chaetomorpha, and Gracilaria. Macroalgae or seaweeds will take up excess phosphates as they grow; this is further removed when the seaweeds are harvested and disposed.

The use of high pH and calcium additives such as limewater/kalkwasser can help to lower phosphate levels in your reef tank.

Kalkwasser is an aqueous solution of calcium hydroxide, and its addition to the tank will result in the precipitation of phosphates from the reef aquarium water.

In some cases, it may cause phosphates to bind to calcium carbonate surfaces such as gravel, sand, and live rock in an insoluble form.

There are several commercially available phosphate-removing products in stores that can effectively help in limiting the amount of phosphates in your reef aquarium and they work by binding inorganic orthophosphate onto their surfaces. 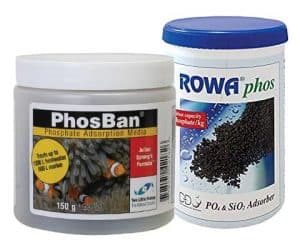 This phosphate remover binds and removes phosphates, arsenic, and silicates from the aquarium water. In addition, it is meant to be used in a media bag before insertion into the canister filter or fluidized media reactor.

Good GFO products include ROWAphos, and PhosBan (links to check the price on Amazon).

Keep in mind that the media should be replaced once it becomes exhausted/saturated because in that state it can no longer bind or adsorb phosphates and other inorganic compounds.

Also, you don’t have to worry about the subsequent cloudiness and slight coloration in the aquarium water after placement; usually, it takes a short time to clear up completely. Some reefkeepers tend to circumvent this occurrence by rinsing the media bag in saltwater or RO/DI water briefly before usage.

Important: Do not overdose GFO in the reef tank, it can be really harmful to your corals.

Note: Many experienced reefers recommend using GFO only as a periodic tool when phosphates are independently risen past desired levels. 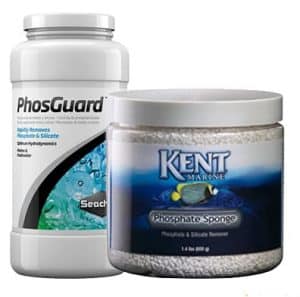 Aluminium oxide is the key, active ingredient in commercial phosphate removers like Seachem’s PhosGuard and Kent Marine’s Phosphate Sponge (links to check the price on Amazon).

The products mentioned are very capable of binding and absorbing phosphates. This is further removed from the aquarium water with the aid of the skimmer and mechanical filter.

Important: Do note that phosphate removers can release a substantial amount of aluminium into the tank water during the course of usage. This has been reported to cause irritation to corals.

Nonetheless, rinsing the media in water prior to usage will reduce the chances of the aluminium particulates being released into the aquarium water.

Lanthanum chloride is an inorganic compound that is capable of binding and eliminating high levels of phosphates in a reef tank.

This usually comes in a liquid form, and it can be dosed directly into the aquarium water to decrease the phosphates to very low levels.

Lanthanum chloride works by binding with phosphates to form insoluble, particulate lanthanum phosphate which are then removed through skimming and mechanical filtration. 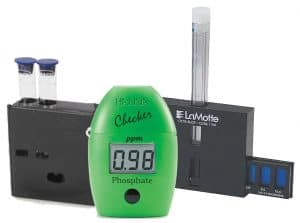 The level of phosphates present in the aquarium water can be ascertained by conducting a test using an accurate test kit or phosphate checker.

Note: Unfortunately, most aquarium phosphate test kits are widely inaccurate or require you to read a shade of blue that’s almost impossible to read.

You may obtain the Hanna Instruments— Marine Phosphate Ultra Low-Range Checker® (links to check the price on Amazon).

This product offers a fast and reliable way to detect the phosphate level of your aquarium water through four easy steps. It is designed for best precision and ideal for measuring phosphate levels between 0 to 0.90 ppm.

Besides, there are other phosphate test kits from reputable brands like Hach and LaMotte. Finally, be sure to pick up the one that has the features/ functions you fancy.

Phosphates can surge to enormous levels in a saltwater aquarium; thereby creating an optimal condition for nuisance algae to grow and proliferate.

If you are dealing with elevated phosphate levels in your reef tank, then you need to implement other removal strategies asides from regular water changes since that will not be enough to drive your phosphate levels considerably lower.

Constant measuring or testing of the reef tank’s water chemistry with an accurate test kit makes it possible to discover and control any impending problem; including those caused by high phosphate concentrations.

With diverse phosphate removal methods at your disposal, you can significantly limit the phosphate levels to forestall the growth of unwanted algae amongst other adverse situations.