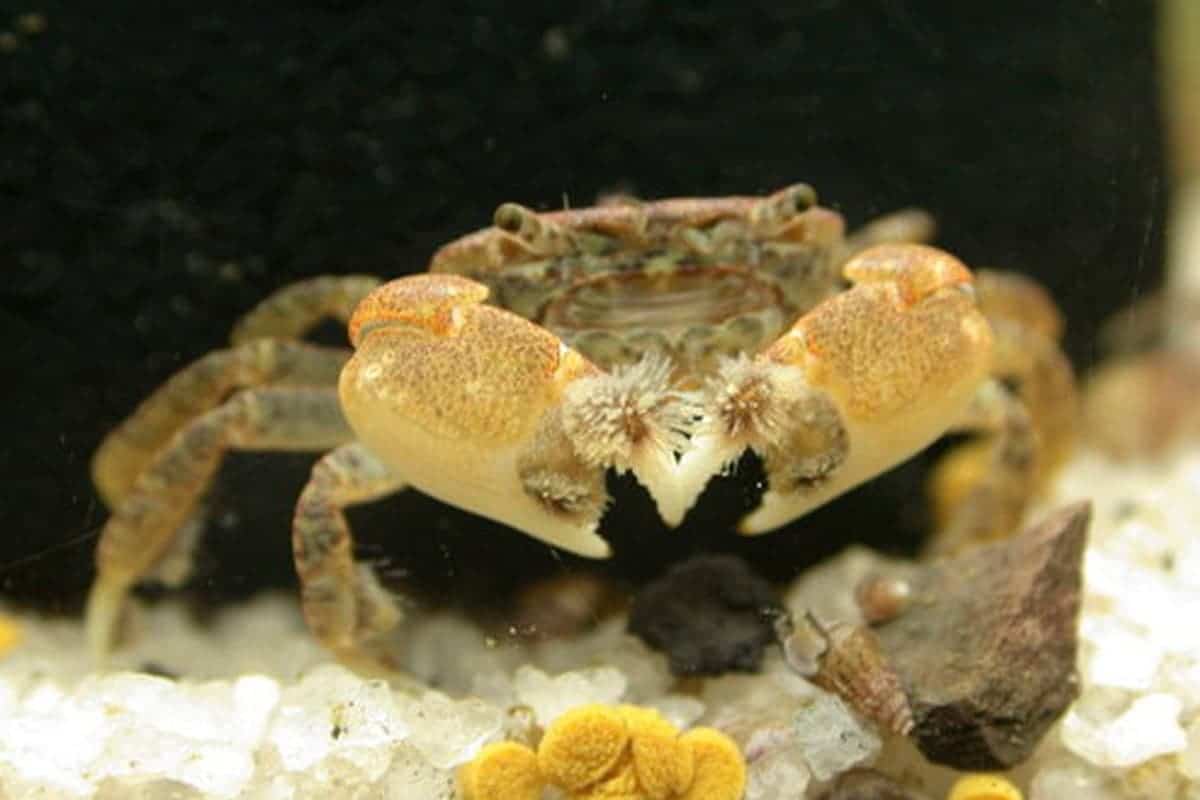 The Pom Pom Crab (Ptychognathus Barbatus) is fully aquatic, freshwater crab (Do not confuse it with the marine species that goes by the same name). These crabs are a true rarity and quite new to the hobby.

Freshwater Pom Pom crabs are very cute, friendly and small creatures. They are one of the least aggressive crab species in the aquarium hobby. All these qualities make them suitable for nano tanks.

Unfortunately, there is not much information about them.  I have done extensive research and could not find any official studies regarding this species. I mean that we do not know their biology, ecology, ethology, and reproduction. Besides basic taxonomy, the science has not studied the Pom Pom Crab (Ptychognathus Barbatus) at all. Nonetheless, people already keep them in their tanks.

Basically, the only way to find out more about the freshwater Pom Pom crabs was to ask aquarists who keep or kept them. This is what I have.

They dwell and thrive near the mouth of a narrow river, hidden among the interspaces of pebbles or rocks in the calm freshwater spring at the depth of 0.2 m.

Description of the Pom Pom Crabs

The freshwater Pom Pom crab (Ptychognathus Barbatus) get their name from the little hair tufts growing from their pinchers.

This is a small-sized crab. Its carapace size is usually between  15 – 25 mm (0.6 – 1 inch). Some aquarists say that when they are full-grown, they may be a little over an inch.

This species is unique among crabs in having a very broad carapace, long and slender legs.

Lifespan: no official date. In captivity, according to the reports, they do not live for more than 1 year.

The Behavior of the Pom Pom Crabs

They have some fascinating behavior and personality.  The freshwater Pom Pom crabs are extremely active and not timid at all. Unlike Thai Micro Crabs (Limnopilos naiyanetri), which you will never see again, you will often see them running (quite fast) all around the perimeter of their tank.

Males can spar with each other at times. However, they usually do not damage.

Regarding other inhabitants of the aquarium, the freshwater Pom Pom crabs are pretty much completely peaceful. They do not seem to care about anything else in the tank.

Although they are fully aquatic, they can function on land as well. They seem to go around and seek out the tallest place to stand, where they can stay outside of water for a while.

They love to burrow and use their claws to push the sand like a little bulldozer.

Note: The freshwater Pom Pom crabs climb extremely well. This is one of the main reasons why people lose them. Therefore, secure the tank (seal the top completely, lower the water level, hide any cords) or they will crawl out of the aquarium.

Like with all crustacean, the freshwater Pom Pom crabs need to molt (shed their old exoskeleton) to grow. After shedding, when the body is still soft and flexible, they start pumping their bodies with water, thus increasing it in size.

Molting is the most important and most dangerous process for them. Without a shell, they are extremely vulnerable. Therefore, to prevent predation, freshwater Pom Pom crabs will dig burrows and molt there. If they disappeared for a day or two, most probably they were molting.

There are no reports that Pom Pom crabs eat live plants. They will not cut them down as well. These crabs are not as bad as crayfish. So, in this sense, they are plant safe.

However, as I have already mentioned they enjoy digging a lot. Therefore, they might dig up some finer rooted plants from the substrate. As a result, they potentially can destroy plants that get in the way of their general activity.

Note: The best option will be to keep floater plants or tough plants with a solid root system.

Sexing the freshwater Pom Pom crabs is easy but you have to see the underside for that. On the underside of the shell, there is a V-shape section. It has a different shape and size in males and females.

Males also have a fat pair of claws with a tuft of bristles at the “wrist” joint (the Pom Poms), and females do not. Large females can have some tuft but it will be very feeble.

Female claws are distinctly smaller, and much narrower than that of males.

In general, males are slightly bigger than females.

The freshwater Pom Pom crabs are an omnivore species so they can eat about anything edible they come across.

Although they lean more towards the herbivore side, occasionally they also need protein-rich frozen foods (such as bloodworms, live brine shrimp, etc).

Pom Pom crabs are great scavengers, they will eat algae and detritus in your tank.

Sometimes people think that because of their tufts they are sort of a filter feeder (as Vampire shrimp or Bamboo shrimp, read my guides about them). Well, in fact, this is not exactly so. They do not intentionally use their “Pom Poms” to filter the water column. Pom Pom crabs simply do not sit, motionless in one place that long. However, they will eat off it anything that stuck there.

In addition, they will also readily accept fish or shrimp pellets, flakes, algae wafers, (for example, Hikari Shrimp Cuisine, Hikari Micro Wafers, and Hikari Tropical Crab Cuisine (links to check the price on Amazon). Once again, do not forget about a calcium supplement.

Note: Many times we can see that other guides and articles warn “Avoid any food product, plant fertilizer, etc. that contains Copper of any form”.

Personally, this is an exaggeration. In my article “How Copper Affects Dwarf Shrimp” I described why shrimp (Actually, it applies to all crustaceans, not just shrimp but to crabs and crayfish as well) need some copper (because it is an essential part of their blood)! The concentration of copper (in food) is too small to hurt.

There seems to be very little information about proper husbandry for this crab. To make it even worse, a lot of reports contradict each other. There is no unanimous opinion among the aquarists, and we do not know their natural water parameters.

Note: Some aquarists manage to keep them at pH 6.4 – 7.2 and believe that this is their optimal number. Unfortunately, nobody knows for sure.

In addition, it is really difficult to say how hardy these crabs are because nobody knows their lifespan in the wild.

Freshwater Pom Pom crabs do not need a large aquarium. A small colony can be sustained in a tank of at least 5 gallons (~20L) as long as it is fully cycled and heated.

Because they are burrowers, they are going to need sand or fine gravel substrate.

Note: These crabs like to burrow underneath stationary objects to hide. Make sure you have enough of those and soft sediment so they have sufficient territory and ground to burrow under.

Do not forget that they need careful acclimation (ream more about it).

They live in freshwater rivers but their larvae need brackish or saltwater for their development. Unfortunately, nobody knows anything else about their reproduction.

In my research, I could find only mentions that Ptychognathus barbatus larvae have several (at least two) larval stagers and megalopa stage.

The duration of the stages is not known. There is no information about larvae requirements or diet.

So far, we do not have any reports of successful breeding the freshwater Pom Pom crabs (Ptychognathus barbatus) in captivity.

Freshwater Pom Pom crabs are appreciated by fish and shrimp keepers for their peaceful nature and are the perfect addition to a community tank.

They do not display aggression at all except during the occasional short squabble with their own species. They can even be kept with shrimp! For example, some aquarists keep them with Bamboo shrimp, Cherry shrimp, Amano shrimp, etc. without losses.

If you do spot your Pom Pom crabs eating a shrimp or fish then you can safely assume it was already dead. Sure, they may pick fights with fish over food but nothing serious. Shrimp usually do not mess with Pom Pom crabs and prefer to retreat.

When choosing tankmates for your Pom Pom crabs keep in mind that they are not very large and might easily fall prey to hungry tankmates. Go for peaceful fish only and avoid anything that might be able to fit a crab in its mouth.

You can read my article “Сherry Shrimp in a Community Tank. Tips to Make it Successful” and use the same principles for the freshwater Pom Pom crabs

A relatively recent addition to the aquarium hobby, the freshwater Pom Pom crabs are quickly gaining popularity due to their peaceful nature and fun behavior. It makes them a great option if you are looking for tankmates for your shrimp or small fish.

How to Set Up a Freshwater Crab Tank