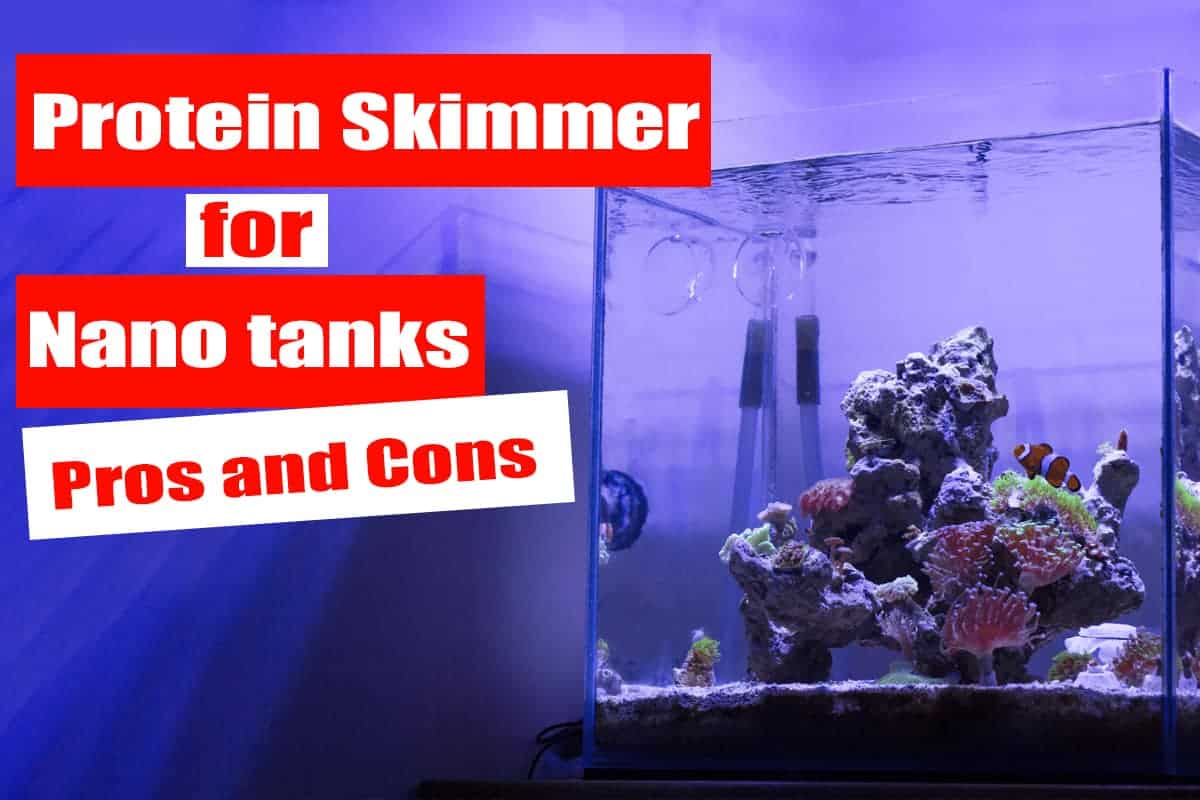 A protein skimmer is a valuable piece of equipment that has recently become very popular in the aquarium hobby because of its significant role in aquarium filtration.

There are generally many opinions on online fora regarding using a protein skimmer for a nano reef aquarium. Many hobbyists argue for and against it following their personal beliefs and experiences.

According to one poll, lots of aquarists believe that can keep a reef tank without a skimmer. At the same time, the results of another poll showed that many people still prefer to use one.

Although there is no unanimous verdict even between well-known professionals, I strongly believe that a protein skimmer in a nano reef tank is required and there are many reasons for that.

Is this piece of equipment necessary for a nano reef aquarium setup? Is skimmer a must or how can we get away without it? You will find out in this article.

What is a Nano Reef Aquarium?

On the internet,  we can find lots of different opinions regarding the size of the nano tank starting from 10 to 40 gallons.

In general, a nano reef aquarium is a saltwater aquarium that can hold up to 20 gallons of water (80 liters) or less in capacity. Whereas 30-40 gallon reef tanks reef are usually considered small tanks.

Nano reef tank is compact, affordable, and space-saving. It is also easy to carry from one place to another.

If you have limited space but still desire to own a reef aquarium, then a nano tank should be top of your considerations. It is seen as a miniature version of the reefs found in nature.

While nano tanks are cute, maintenance is not the easiest. The water chemistry needs to be kept stable to prevent the demise of the aquatic life in it.

What is a Protein Skimmer?

A protein skimmer is simply a piece of equipment used in aquariums for two significant purposes:

The first is that protein skimmer removes wastes in the form of organic compounds from the water column before they even break down.

Basically, it functions like a filter for sifting out loads of impurities and waste from the aquarium water thus helping your main filtration system.

Secondly, it also oxygenates the water.

The aspect of oxygenation is critical because saltwater cannot hold as much oxygen as freshwater can.

When the room temperature gets warmer, it can also influence the temperature of the water in the aquarium, making it warmer and further reducing its ability to hold oxygen.

This part is where the importance of the protein skimmer comes into play. It helps oxygenate the water continuously, making it ideal for fish, shrimp, snails, and other aquarium inhabitants.

Protein skimmers are very important and needed in all saltwater aquariums. Skimmers function through a process called foam fractionation.

Observing the skimmer from time to time is crucial. You don’t want the collected gunk (skimmate) overflowing from the receptacle when it’s filled.

Protein skimming improves water quality by removing contaminants and organic compounds that can break down and release toxic compounds like ammonia.

The skimmer removes large organic molecules, e.g., waste and uneaten food, before they break down into smaller molecules. Failing to remove these molecules would cause water pollution and have an otherwise deleterious, long-lasting effect on the overall health of the aquarium and aquarium inhabitants.

Should We Use a Protein Skimmer in Small Tanks? What Professionals say.

There are differing opinions from enthusiasts and experts on the necessity of protein skimmers. Jim McDavid, Author of Tropical Fish Hobbyist magazine, believes that protein skimmers are compulsory for nano reef aquariums.

However, another expert, Scott W. Michael of Aquarium Fish USA Magazine, mentions that using protein skimmers is not mandatory, although he considers it a helpful piece of equipment. Evaluating the reason behind Scott Michael’s comment, it’s obvious that other types of aquarium filtration can perform the work of a protein skimmer.

Pros and Cons of Protein Skimmer in Small Tanks

I would also like to say that this is by no means a cheap hobby and any error can cost us lots of money. Therefore, it is much better to be on the side of caution than to have to fix a costly mess later. It’s a safety net.

When There is No Protein Skimmer?

The water quality deteriorates rapidly in the absence of a protein skimmer, especially when there is a high bioload in the aquarium. However, there are still some ways to fix it.

While using a skimmer, maintenance demands of the aquarium is relatively low due to reduced waste accumulation.

Some people say that the main purpose of filters, reactors, skimmers, etc. is to help water conditions between water changes. So, when we are dealing with a small volume of water a protein skimmer is next to worthless. Others believe that water changes can be an adequate replacement for skimmers in nano (small) reef tanks.

Well, I do not agree with them. Even though water changes and skimmers do a similar job to some degree they are not the same.

Choosing a Protein Skimmer for Your Nano Reef Aquarium

When choosing a protein skimmer, there are certain things to consider.

1) The strength of the skimmer

Choosing a skimmer rated for a large aquarium, e.g. a 100-gallon tank, is ideal for removing waste efficiently and keeping the water chemistry stable.

Finding a protein skimmer that would fit your aquarium setup comfortably cannot be overemphasized, especially for reef aquariums. This type of aquarium often uses additional equipment known as the sump.

A sump is usually a piece of equipment that provides room for other equipment like the protein skimmer. Thus, make sure to acquire a skimmer that would be a good fit for your aquarium sump.

Sadly, skimmers that are more powerful than their size or form are pretty expensive.

On inquiry, you will realize that many saltwater aquarists use a protein skimmer because of the great help it renders to aquarium setups.

It is also relatively cumbersome to keep changing the water in your aquarium very often. A protein skimmer takes a lot of that work off your hands. This piece of equipment greatly aids in removing waste and providing oxygen in the reef aquarium.

Some aquarists who would not want to use the protein skimmer would rather do frequent water changes and/or have one readily available for emergencies.

The bottom line is that I strongly recommend using a protein skimmer for nano reef aquariums.