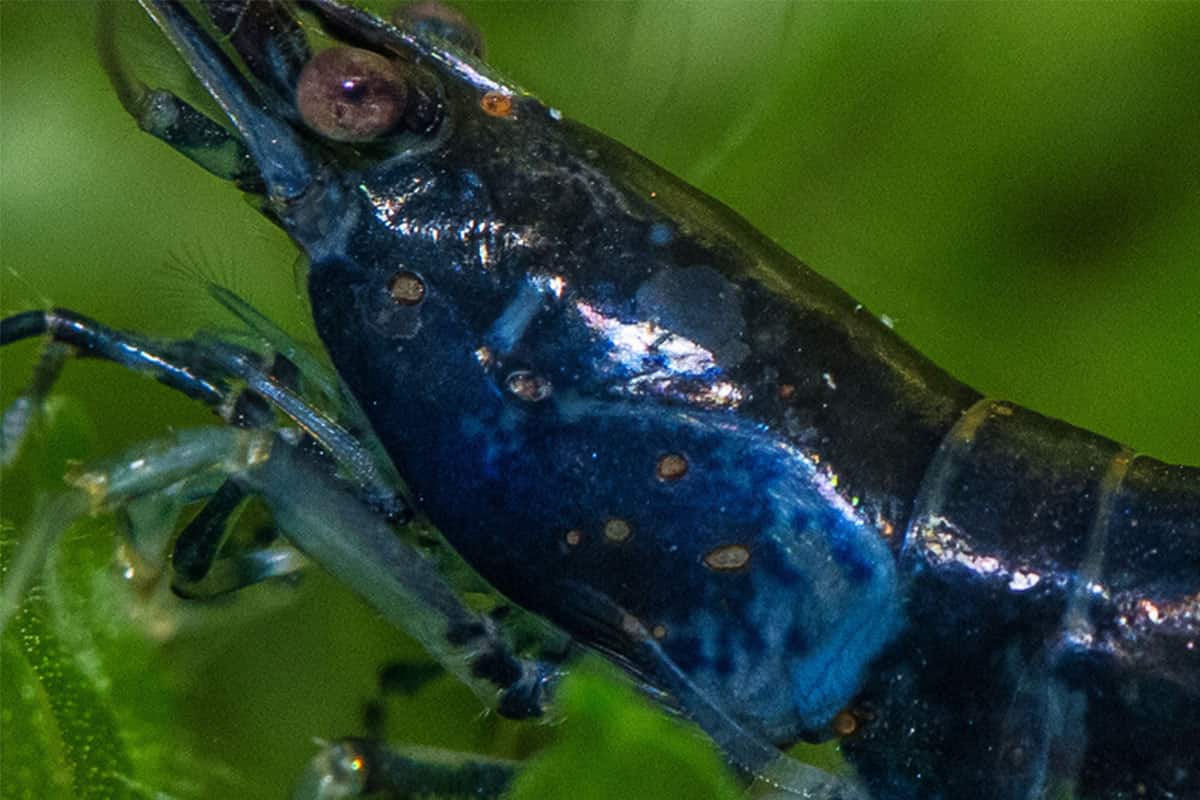 Dwarf shrimp can be infected with the many types of bacteria that cause problems with their exoskeleton (shell). One of them is a so-called Chitinolytic bacteria. These bacteria can cause shell disease that also has a lot of other names such as “Brown spot disease”, “Burned spot disease”, “Black spot disease”, and “Rust disease”.

As any crustaceans, dwarf shrimp have a hard exoskeleton (commonly called a shell) that surrounds the outside of their bodies. Even though the shell is pretty rigid and protects the shrimp like a suit of armor, it can still be damaged by some bacteria that can disintegrate it.

Rust disease can be described as a progressive degradation of the shrimp shell. It is characterized externally by the appearance of dark spot lesions in the exoskeleton surface. These exoskeletal erosions are largely attributed to the Chitinolytic bacteria.

In this article, I have gathered all information about Rust disease and how to treat it in our aquariums based on existing official studies, experiments, researches, and experience of aquarists.

What are Chitinolytic bacteria?

Chitinolytic bacteria are not just one species that can be responsible for Rust disease. Actually, it is a member of several genera including Vibrio, Aeromonas, Pseudomonas, Alteromonas, Flavobacterium, Spirillum, Moraxella, Pasteurella and Photobacterium.

Note: These bacteria are usually associated with shell disease because they possess the enzymechitinase that is capable of degrading carapace chitin.

The origin of this disease is not fully understood. According to the study, biologists initially thought that Rust disease was restricted to the exterior surfaces of the exoskeleton. However, recent studies show that Rust disease is not a disease caused by a single pathogen and solely restricted to the exoskeleton of the crustaceans. With time, it can penetrate into soft tissues of the shrimp.

For example, some studies have demonstrated a role for Chitinolytic bacteria as initiating agents. If left untreated, Rust disease opens the wound that can also harm internal tissues either by the same bacteria or some others.

Another problem is that dwarf shrimp (like all crustaceans) do not have a specific, adaptive, and long-term ‘memory-based’ immunity system. Their defenses are dependent upon innate immunity that responds to common antigens on the cell surfaces of potential pathogens.

Basically, it means that shrimp cannot become immune to disease through vaccination. It can be a real problem in aquaculture ponds where dwarf shrimp are bred in captivity.

How to Identify Rust Disease. The symptoms 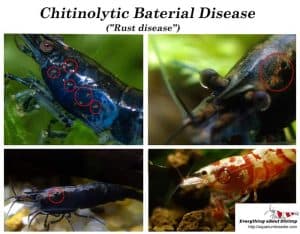 Dwarf shrimp have a heavily calcified body (exoskeleton or shell), that provides an effective physical barrier against pathogens that try to penetrate the outer surface of crustaceans. However, when Rust disease starts taking place you will notice dark spots and eroded wounds on the exoskeleton and appendages.

These dark spots can be often observed on abdominal appendages and carapace (including gill filaments). The black coloration of the lesions is a result of melanisation – a defense (immune) response triggered by the damage of the shell

In severe cases of Rust disease, the shrimp’s appearance is studded with symptoms of weakness, anorexia, loss of limbs, lower fecundity, and finally mortality.

This disease goes through 3 stages:

When Chitinolytic bacteria invade a shrimp, Rust disease undergoes a series of phases that eventually lead to the multiplication of the pathogen.

The main problem of the incubation period is the first stage of the disease process before symptoms become even apparent. Another problem is that there is no information about this period at all. I could not find any documented reports or studies regarding the incubation period and how long it can last.

The only thing that I found is that temperature plays an important role for the Rust disease. For example, the water temperature at 28°C (82 F) has enhanced the shell diseases.

In the early stages the Rust disease commences as a small, darkened, sometimes friable, or cratered area on the shrimp body. We can see lesions appear as small, shallow discolored depressions which are thought to be the result of superficial damage or simply color marks.

As the disease progresses, shell degradation increases in size and extends into the lower layers of the skin.

Damage of the Internal Organs.

Eventually, the lesions penetrate into the soft underlying tissues of the shrimp. As a result, these wounds have direct contact with the organs of the shrimp that can/will become infected either by Chitinolytic or some kind of other bacteria.

Is Rust Disease Dangerous to the Shrimp?

The short answer is definitely yes! Not immediately fatal, Rust disease is still extremely dangerous to any crustaceans including shrimp.

Rust disease may cause a range of problems such as:

Note: Rust disease is not just a problem for the aquarium hobby. In reality, it has a huge impact on commercial farming of shrimp, crabs, and lobsters.

Luckily, early stages of the disease may be lost at molt (when shrimp are shedding the old shell). That is why the younger is the shrimp, the more chances it has to survive. The incidence and severity of the condition can increase when molting is infrequent. So, adult shrimp that have undergone a terminal molt would exhibit high levels of the disease.

Yes, rust disease is contagious. If left untreated, it may progressively affect the entire population of the shrimp colony.
The rate of mortality is directly related to the degree of infection or exposure to it.

Although in certain situations the reasons for elevated levels of shell disease are intuitive, poor water conditions, dirt in the aquarium, overstocking, and small injuries are believed to be the main causes of Rust disease in shrimp aquariums.

Note: Several studies reported that in natural populations the disease is significantly lower compared to farms, where crustaceans are often overstocked.

How to Treat Rust Disease in a Shrimp Tank

Thanks to shrimp breeders who attempt to resolve this issue we now have some successful treatment using hydrogen peroxide (H2O2). Unfortunately, it is possible to treat Rust disease only in the early stages. However, no guarantee can be given even then.

You will notice that the dark spots are losing their color. Until the rusty brown spots are completely gone.

Potential problems: Overdose Hydrogen peroxide will harm the shrimp and fish. Their gills are very sensitive. Moss balls cannot tolerate hydrogen peroxide at all. Some plants like Mosses, Vallisneria, Bucephalandra, etc. can melt. Many other plant species respond well.

Is it Possible to Treat Shrimp Individually?

Sometimes people are very cautious and do not want to use Hydrogen peroxide or any other powerful oxidizers in their aquariums. So, can we do the same but in a quarantine tank?

Of course, we can. The only problem is that by curing the infected shrimp we leave Chitinolytic bacteria in the water column. So, there is a risk that it can infect other shrimp.

Are There Other Ways to Treat It?

Well, this is a total bull sh…, It will not work. Even more, changes in water temperature and pH can shock your shrimp and kill it even faster than Rust disease. Salt will not help either, Chitinolytic bacteria thrive in marine water as well, they do not care about salt.

Is It Possible to Prevent Rust Disease?

So far, there is no single compound or strategy that can guarantee a solution to the problem of disease and for long-lasting protection in our shrimp aquariums.

We can only hope that:

should reduce the chances of Rust disease in the tanks.

Rust disease is not a disease caused by one type of bacteria and should not be considered a disease solely restricted to the exoskeleton. The threat is more serious. Many bacteria are capable of degradation of the chitin component of the shrimp shell that can infect the internal organs. This may ultimately lead to the death of the shrimp.

No one likes to think about their shrimp getting Rust disease that can potentially contaminate and kill your shrimp colony. The good thing though is that nowadays we know how to treat it!

In any case, it is very important for you to be informed, understand what signs and symptoms to look for, and most importantly how you can treat your shrimp from the Rust diseases. 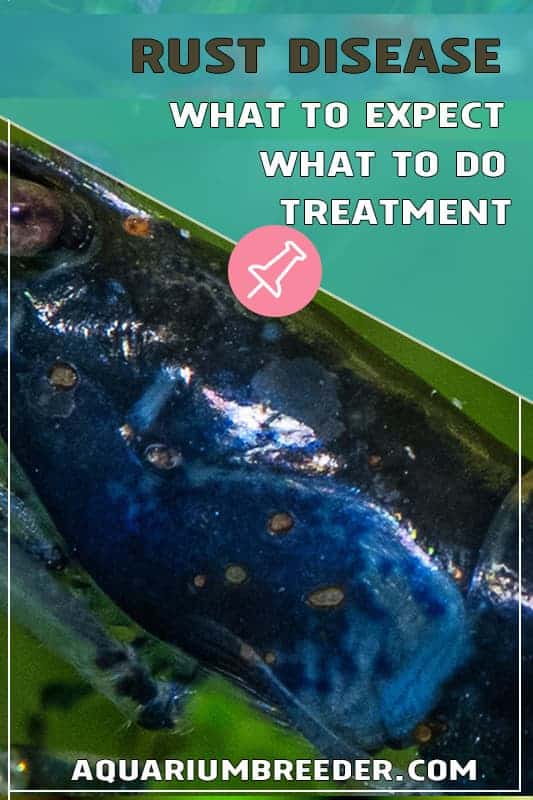 10 thoughts on “Rust Disease in a Shrimp Tank. Treatment”