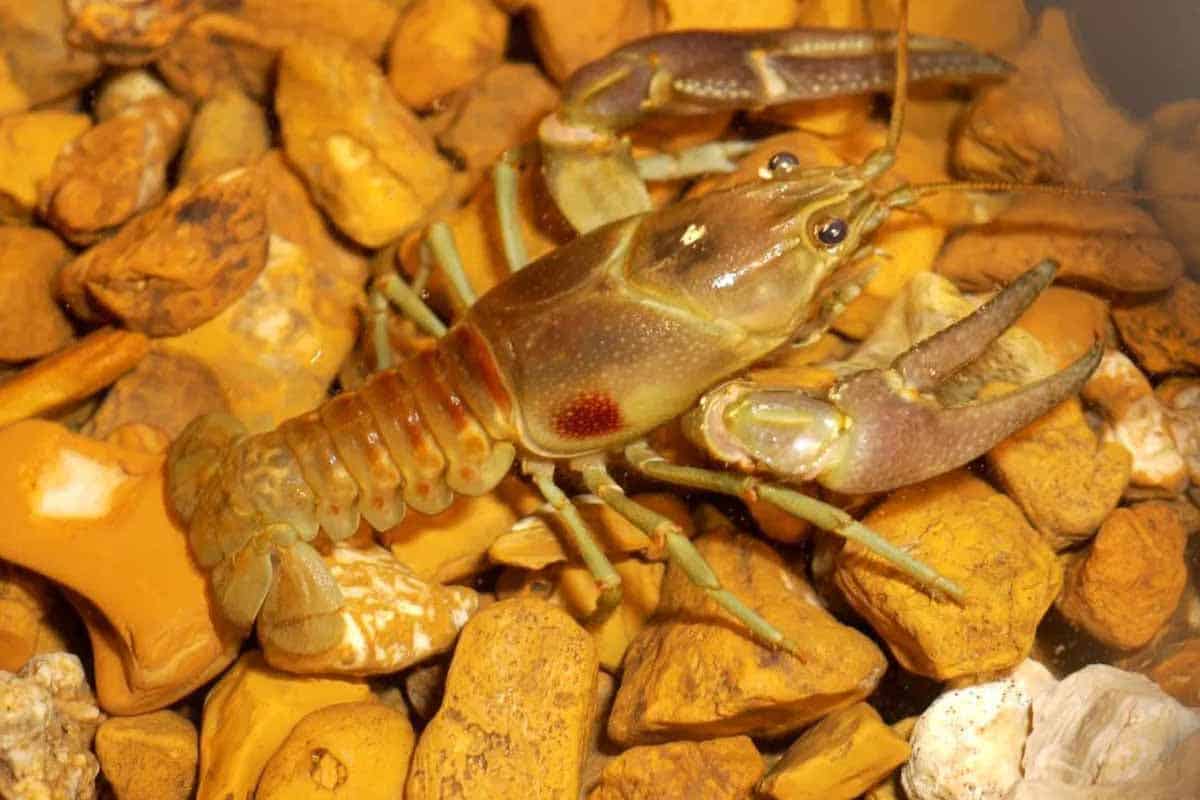 Faxonius rusticus, also known as the Rusty crayfish, does not have a good reputation because of its invasive nature.

Rusty crayfish are aggressive and extremely adaptable species. These crayfish grow and mature fast. Once established, they are extremely difficult to nearly impossible to eradicate.

If you consider keeping Rusty crayfish as pets in your aquarium, or you simply want to know more about this species, over the following few pages, this complete profile covers all aspects, from natural habitat conditions, behavior, feeding preferences, breeding, etc.

Originally, the Rusty crayfish were known as Cambarus rusticus (this name was initially assigned to this species in 1852).

In 1872, these crayfish were moved to the genus Orconectes (Orconectes rusticus). Faxonius rusticus is a newer name assigned to the species only in 2017.

Note: The change from Orconectes to Faxoniusis based on a separation of cave-dwelling (Orconectes) and non-cave dwelling (Faxonius) species of crayfish.

This crayfish is native to the United States of America. It is home to the Ohio River Basin (which covers southeast Illinois, Indiana, Ohio, West Virginia, Tennessee, Kentucky, and parts of Alabama, Virginia, and North Carolina.

Nowadays, these crayfish were reported to occur in 33 states in the USA., and 3 Canadian Provinces.

There are assertions that they got there because they were used as live bait by anglers or intentional release by lake managers seeking to manage macrophyte communities.

Interesting fact: This species was first caught in 1973 in Illinois. Rusty crayfish are rapidly spreading across the east of North America. The expansion and spread of rusty crayfish have resulted in the displacement of native crayfish in these places. As an invasive species, several measures have been put in place by authorities to put its population and spread under control.

Rusty crayfish is a freshwater crayfish species that thrives in freshwater streams, rivers, lakes, and ponds. They prefer areas with rocks, logs, and trees for cover and shelter.

This species is a habitat generalist. Rusty crayfish thrive both in areas of high flow (rivers and streams) and standing water (lakes and ponds) with gravel, cobble, or sand substrate.

Although this species prefers clear well-oxygenated waters with diverse habitats and available shelter/cover objects, it does not limit their expansion.

In nature, Rusty crayfish are predominately found in less than 3 ft. (1 meter) of water but have been found as deep as 45 ft. (14.6 meters).

Rusty crayfishes are not small crustaceans.

With average carapace lengths greater than 2.5 inches (6 cm), they are relatively large species of crayfish. In total length, Rusty crayfishes reach up to 5 inches (10 cm).

In terms of relative magnitude, these crayfishes have particularly sizable claws compared to other crayfish species. Their claws can be almost the size of the carapace.

According to the study, it was found that Rusty crayfish can live up to 4 years.

Rusty crayfish are fully aquatic animals. They require permanent bodies of water for survival since they live in open water.

Unlike many other crayfishes, this species is known to be a non-burrower. However, they may do some shallow burrowing (characterized by a simple tube-shaped burrow oriented horizontally) into debris and underside of rocks during periods of temperature extremes or when no other structural habitat is available.

Generally, they prefer to find shelter under rocks and logs.

In addition, Rusty crayfish are very aggressive creatures that engage in frequent agonistic interactions over access to resources, including shelters. In nature, they often compel other crayfish to hide or move away, giving them a competitive advantage.

Their aggressive nature peaks when they meet each other.  They take a posture, ready to fight. Their constant fights are a way to assert dominance — as the crayfish with the most wins gets placed in the hierarchy.

Interesting fact: Crayfish communicate with each other through urine — yes, urine! The smell of the urine is a chemical cue to one another. When they meet for the first time, they release urine as a form of communication. The stronger the odor, the less time for aggressiveness and wrestling.

This is also a relatively active species. However, peaks of higher locomotor activity alternate with longer periods of slow or null speed.

According to the study, they spend equal proportions of time immobile and walking (50% immobile vs. 50% walking).

In aquariums, a frequently observed behavior is “wall-following” in which Rusty crayfish walking parallel to a wall will trail the end of one of its antennae along the wall, using the surface texture to navigate.

Rusty Crayfishes are voracious eaters. They have a greater metabolic rate and enormous appetite than most crayfish species.

This species is an opportunistic omnivore that can feed on a variety of food items. In the wild, they consume snails, insects, fish eggs, small fishes, veggies, aquatic plants, algae, and detritus.

According to the study, detritus was the most abundant food item in the guts across months, ranging from 44–65% of the overall diet. Plant material and algae were also found in all collection months.

Rusty crayfish can undergo seasonal diet shifts to match their resource use to the available resources in their environment. For example, the abundance of animal, plant material, and algae in the guts increased during the summer months and decreased during fall and early spring. Whereas the diatom contributions to the diet were highest in the spring months.

In captivity, for the best growth, Rusty crayfish need a good mix of meats and vegetation, where their feeds should contain protein at a level of about 20 – 30% of the diet.

If Rusty crayfish are kept as pets in aquariums, suggested foods for these crayfish are (some links to Amazon):

Rules of Diet in Captivity for Rusty Crayfish

Calcium (Ca) is an essential component of the exoskeleton composition of all crayfish species and the Rusty crayfish is not an exception.

Growing a new exoskeleton requires a high amount of Ca to facilitate calcification. The process of molting puts crayfish in a vulnerable state.

No, they are not. Rusty crayfish will eat, cut, and shred almost any plant they can get.

It is not recommended to keep them in planted tanks. The only viable options for this species are:

Rusty crayfish are extremely adaptable species and can thrive in most situations.

In aquariums, though, it is better to replicate their natural environment. Therefore, you still need to address their core needs! Here are some care guidelines to help you out.

If you are a first-time crayfish owner it is important that you cycle your tank before bringing any crayfish home. Once the tank is cycled you need to check the quality of the water using a test kit.

Crayfishes need a lot of space to move in the tank. A 15-gallon (60 liters) tank is recommended minimum for one Rusty crayfish. A 5 or 10-gallon tank is too small to keep a large, adult Rusty crayfish.

Start with a 20-gallon tank. You can consider larger tanks too. Some reasons to have a larger tank:

Tip: Rusty crayfish are great escape artists and will climb air hoses and silicon sealant because of this, you should place a fitted lid on the tank. When keeping any type of crayfish, it is a good idea to make sure the water line in your aquarium is not too high.

Temperature: Rusty Crayfishes can endure extreme temperatures. In their natural habitat, they can survive temperatures from near 32 – 95°F (0 – 35°C). But that does not necessarily mean that they thrive at the upper and lower points of their temperature tolerances.

Therefore, their preferred water temperature is between 68 – 77°F (20 – 25°C). This temperature range is considered optimal for the species.

Note: Crayfish are coldblooded and thus are less active in colder temperatures.

pH: Observations showed that Rusty Crayfish prefer water with a pH of greater than 5.5 and dissolved calcium above 2.5 mg/L. Ideally, ph should be more than 7.0.

Although Rusty crayfish can be active even during the day, they are still considered nocturnal animals.

Therefore, no special requirements. However, if you have plants, lighting should be adapted to their needs.

Rusty crayfish will appreciate a well-oxygenated tank but this is not strictly necessary.

In nature, Rusty crayfish use their adaptability to various types of habitats. Basically, this species can inhabit all substrates but prefers a cobble habitat composed of small rocks, gravel, and lots of boulders.

They use rocky habitats as shelter from cannibalism and predation over alternative substrates like sand or muck.

The main purpose of décor is to provide hiding places to mimic the natural habitat as much as possible.

Shelters are important as they offer protection during periods of vulnerability such as molting, protect the young crayfish against predation, and minimize aggressive interactions.

Stacks of PVC pipes, mesh bundles, driftwood, etc. should always be more than the number of crayfish to reduce competition and cannibalism.

Note: Rusty crayfish are aggressive towards each other and cannibalism after molting can become a huge problem.

Males and females become mature at an identical size when their carapace length reaches 0.6 inches (1.5 cm).

When a female is ready to mate, she will allow a male to clamp her claws and put her on the back.

Females can store semen until their eggs are ready to be fertilized. They begin to lay their eggs as soon as water temperatures rise.

Interesting fact: In Faxonius rusticus, females are attracted to pheromones produced by males during breeding seasons. However, males do not show a preference for female signals.

Females carry fertilized eggs in the underside of their tails sections called “swimmerets.” Their eggs have deep red or maroon color.

Rusty crayfish can carry anywhere from 80 to 575 eggs. Minimum egg counts for the 29 ovigerous females. Fecundity is strongly correlated to the size of sexually mature females.

Depending on the temperature, on average, eggs hatch after 20-30 days. Upon hatching, juveniles will stay near the mother for several weeks. After that, they become completely independent.

Since Rusty crayfishes are quite aggressive, it is safe to say they do not have suitable tank mates.

This species is too territorial and hostile. They are hostile to fishes, other species of crayfishes, crabs, dwarf frogs, and especially snails.

The Rusty crayfish have been observed going after the nests of fish at night. In the long run, small community tank fishes and shrimp have no chance against the claws of these crayfishes.

At the same time, larger and/or aggressive fish will hunt down the Rusty crayfish.

Overall, it can be pretty complicated to put other creatures in the same tank with the Rusty crayfish. The ideal situation is a species-only tank with a lot of hiding places to reduce aggressive behavior.

Rusty crayfishes are aggressive and adaptable aquatic creatures. They are opportunistic omnivore and can feed on a variety of food items. All these features make them low-maintenance animals even for beginner aquarists.

However, be careful and check your state laws – Rusty crayfish are banned in many states because of their invasive nature.