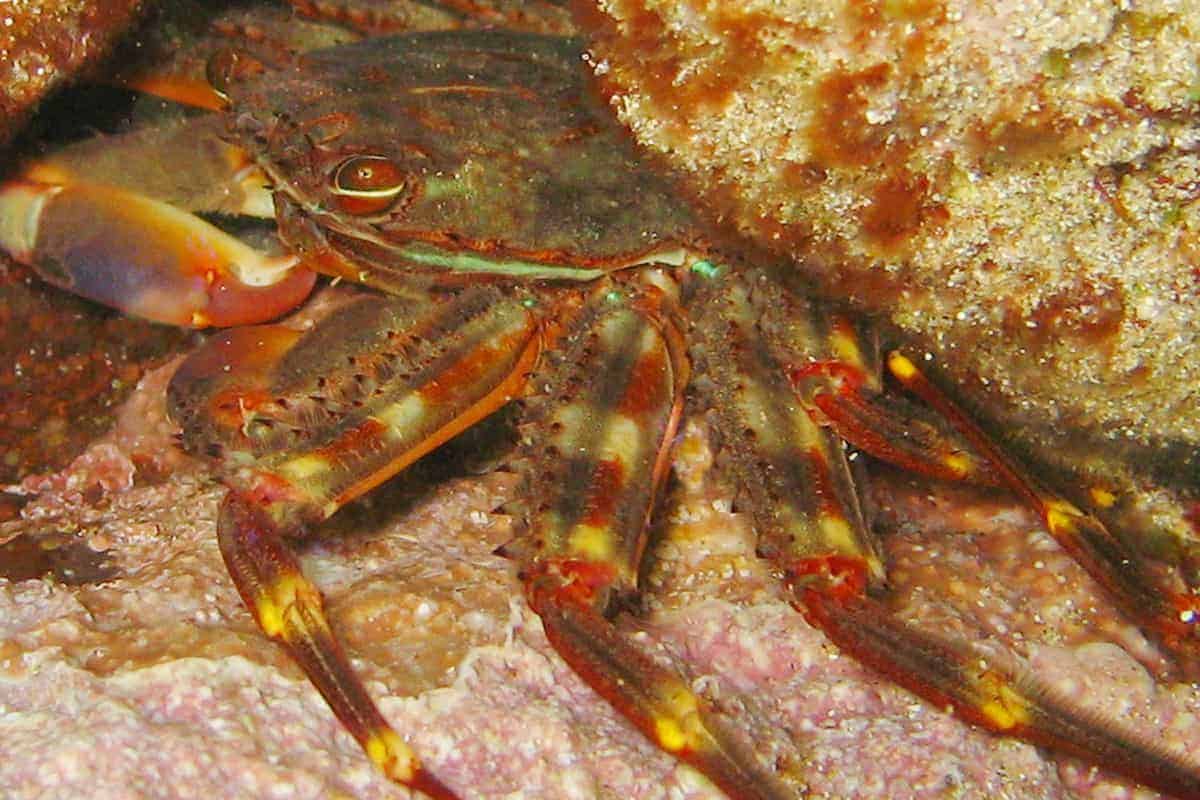 The Sally Lightfoot Crab, also known as Percnon Gibbesi as well as its common name “Urchin Crab”, is a popular choice for those looking to keep crabs in a home aquarium. Their striking appearance makes them stand out even among the unique selection of animals in their native habitats.

Its ability to rapidly adapt to different types of habitats and flexible feeding habits make Sally Lightfoot Crabs a great addition to most indoor aquariums and require a relatively basic level of knowledge to ensure that they thrive in your home as they do in the open ocean.

Although they are a somewhat unorthodox pet, more and more aquarists are giving crab keeping a try. It can be intimidating as a first-time crab owner to learn how to care for these unique animals. Keep reading for everything you need to know about Sally Lightfoot Crab’s care and keeping in your own aquarium.

The native habitat of a Sally Lightfoot Crab is extensive, and they can be found on the Pacific Coasts of Mexico, Central, and South America, the Atlantic coast of South America, the Western Atlantic from Florida to Brazil; the Eastern Atlantic from Madeira, the Azores, the Cape Verde Islands to the coast of Africa, from Morocco to Ghana and offshore islands of the Gulf of Guinea.

In about 15 years, it has virtually colonized the entire Mediterranean Sea, becoming one of the most widespread non-native spe­cies found in the Mediterranean waters.

Sally Lightfoot Crabs are strictly subtidal and occupy the shallow hard bottom, usually in a rocky shore and 1 – 2 m depth distribution, among boulders covered by algae.

Description of the Sally Lightfoot Crab 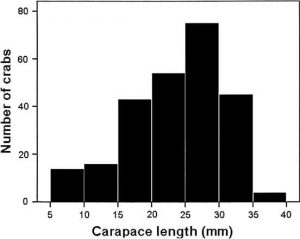 Coloration of adult Sally Lightfoot Crabs vary, and while a reddish-brown color with orange and yellow details is typical, they can vary from blue to red to spotted and even pink. These stunning bright colors are an important part of the sexual selection process for these crabs as well as making them quite popular among human owners.

Note: Young Sally Lightfoot Crabs are almost always brown or black. They are vulnerable at this stage of their lives and these neutral colors allow them the added advantage of blending in with their surroundings in the rocky shorelines of their native habitats.

These crabs have a disk-like, slightly oval, flattened body with two identically sized and thick claws.

All Sally Lightfoot Crabs have five sets of legs with visible rings. They also have two front antennae on the top of their heads, which are almost always in motion.

Note: Sally Lightfoot Crabs have relatively soft shells as they are young. So care should be taken while handling, but they will harden significantly as the animal grows older.

The Behavior of the Sally Lightfoot Crab

While Sally Lightfoot Crabs are considered relatively easy to care for. It is important to remember that they have a semi-aggressive temperament, a characteristic that may turn off some potential owners.

Generally speaking, aggression in Sally Lightfoot Crabs is latent until they grow into their adult size. At this point they may become aggressive and will likely attack small prey in the tank, such as invertebrates and small fish.

Sally Lightfoot Crabs can be very difficult to catch as they are very quick on their feet, possess an incredibly fast reaction time and capable of jumping. These adaptations are their main defense mechanisms in their predator heavy natural habitats and will stay with them even in a domestic environment.

Once full-grown, these crabs have virtually no natural predators in their native habitat on account of their impressive speed, hard shell, and other defensive adaptations. They can even shed a leg or spray water at their attackers in moments of extreme distress. So there is no need to panic if you observe these unusual behaviors in your pet.

A Sally Lightfoot Crab will generally spend most of its time scavenging around the tank and keeping out of sight by hiding behind and between rocks and any structures you choose to incorporate in your aquarium.

They become most active towards dusk.

In the wild, Sally Lightfoot Crabs tend to exhibit a very patchy distribution and aggregated in groups of more than two individuals.

The molting is another reason that is critical to maintain a sufficient amount of rocks and other hiding spots. Sally Lightfoot Crab. Sally Lightfoot Crabs are extremely vulnerable in this soft-shell phase of their life and need a place to hide safely while their shells harden.

Sexing Sally Lightfoot Crabs can be somewhat tricky for an inexperienced owner. This difficulty is only exacerbated by the active nature and quick speed of these animals. It can be tough to get a good look at them, but you will need to examine the underside of the crab to discern whether your pet is male or female.

Male Sally Lightfoot Crabs generally have a thinner abdominal width than their female counterparts, who have a much wider abdomen.

Sexual dimorphism seems to manifest at an early stage during the Sally Lightfoot crab’s life cycle.  At Carapace length as small as 12 – 13 mm, male chela length shows an upward inflection relative to that of the female. The sexual dimorphism of the chelae may be a consequence of their use by the male in combat, display, and courtship.

Sally Lightfoot Crab is feeding primarily on algae (including a wide variety of algal meals), but also on animal food (such as copepods, worms, snails, crustaceans and jellyfish), and is considered an opportunistic feeder.

Field observations suggest that plant material constitutes the bulk of the diet; however, in some cases, animal matter constituted 43.2% of the stomach contents. This flexibility in feeding is probably a key factor that has facilitated the spread of Sally Lightfoot Crabs world-wide.

If you find that there are not enough leftovers floating around your tank or algae available to sustain your Sally Lightfoot crab(s), you may want to consider supplementing your pet’s diet with store-bought food like dried seaweed or other meaty treats.

You can read some of my related articles:

Indian almond leaves and Alder Cones.
How to Blanch Сucumbers and Zucchini for Shrimp.
How to Enhance Shrimp Color?

Sally Lightfoot Crabs are considered reef tank safe and will not attack living corals. However, it should be noted that they may attack and eat invertebrates and small fish as they age and become larger and more aggressive.

Keeping Sally Lightfoot Crabs in your home is simple. They are very hardy.

You will want to use a saltwater tank with a capacity of at least 15 gallons and that has plenty of rocks and caves for your crab to hide in. In the wild, this species showed a preference for boulder fields with surfaces covered with encrusting algae or algal turf. However, this species was never observed on sandy bottoms, bottoms with sparse boulders, or in seagrass meadows. So, keep it in mind when you decide what type of substrate to choose for them.

While Sally Lightfoot Crabs do not need any additional supplements to survive in captivity, you should take care to ensure that tank water remains at a warm temperature – between 72 to 78°F (or 22 – 25°C). According to observations, although this species can tolerate a wide range of water temperatures, its survival might be challenging during low winter temperatures 15°C or less (59°F).

As these animals are used to the turbulent waters of the ocean shore, a tank with a medium/strong current is ideal for Sally Lightfoot Crabs. The ideal water pH level for the Sally Lightfoot crab is between 8.0 – 8.4 and GH between 8 – 12 °d.

An added bonus of keeping these critters in your tank is that they act as tank janitors. Meaning that they will clean the substrate and rocks in your aquarium.

Note: Consistent water parameters are the cornerstone of any successful aquarium.  Make sure that they are all kept within a suitable range (at all times) and do not jump around.

I need to start off by saying that due to many different factors, the breeding process presents various difficulties. Unfortunately, it is really hard to replicate all the conditions at home. So far there have been no reports of successful breeding Sally Lightfoot crab in captivity.

Even biologists in their experiments have not done it yet.

In the wild, they breed during the summer months.

Berried female crabs, spend time carrying eggs on their stomach until they are ready to hatch, at which point they will release the eggs into the ocean. Brood size produced by mature ovigerous Sally Lightfoot females can range between 250 – 32000 eggs per brood. There is a significant correlation between the number of eggs per brood and the size of ovigerous females.

Like most marine organisms, Sally Lightfoot crabs have a larval phase (locomotion at this stage is usually limited to vertical movements) followed by a megalopa phase that is able to actively swim and reach the habitat where settlement occurs. If the larvae survive to molt enough times, they will then undergo metamorphosis and enter the juvenile stage of their life cycle.

There is no information on how long it takes larvae to metamorphose into baby Sally Lightfoot crabs. The only useful information I could find is that biologists examined the substrate preference and settlement behavior of megalopae of Sally Lightfoot crabs using three natural substrates in an experimental mesocosm: gravel, cobbles and flat stones. A Strong preference was given to hard and stable substrates i.e., cobbles and flat stones with interstices where to hide, which are also the most suitable as they provide shelter and food.

Sally Lightfoot crabs prefer to settle on a physically stable substrate that offers narrow interstices for hiding rather than on mobile substrates like gravel or sand.

They get along especially well with other members of their own species.

They will, however, compete with their tankmates for food. It can also affect their behavior. To mitigate this possibility, it is important to make sure that your Sally Lightfoot Crab is well fed at all times.

In any case, as previously mentioned, it is risky to house Sally Lightfoot Crabs with small and peaceful fish, shrimp and snails. As they will likely begin to prey on them eventually.

All in all, Sally Lightfoot Crabs make a great addition to the home aquariums of amateurs and seasoned crab keepers alike. Their habit of scavenging will keep your tank environment clean and healthy and save you money on expensive foods.

These crabs are as beautiful as they are efficient. Their brightly colored shells will no doubt be a welcome sight in your tank. Best of all, these crabs will keep to themselves if given the chance and with a bit of planning, can co-exist peacefully with most tankmates.
All these crabs need is a bit of background knowledge to recreate their ideal conditions and allow them to thrive in your home as they do in environments around the world.